Prevalence of Virulence Genes and Antimicrobial Resistances in E. coli Associated with Neonatal Diarrhea, Postweaning Diarrhea, and Edema Disease in Pigs from Austria

Increasing numbers of multi-resistant Escherichia (E.) coli from clinical specimens emphasize the importance of monitoring of their resistance profiles for proper treatment. Furthermore, knowledge on the presence of virulence associated genes in E. coli isolates from European swine stocks is scarce. Consequently, a total of 694 E. coli isolated between 2016 and 2018 from diarrheic piglets of Austrian swine herds were investigated. The isolates were tested for their susceptibility to twelve antibiotics using agar disk diffusion test and for the presence of 22 virulence associated genes via PCR. Overall, 71.9, 67.7, and 49.5% of all isolates were resistant to ampicillin, tetracycline, and trimethoprim-sulfamethoxazole, while resistance levels to gentamicin and fosfomycin were 7.7 and 2.0%, respectively. Resistance frequency to ciprofloxacin was higher than in previous studies. Isolates were more likely to be resistant to ampicillin if they were also resistant to ciprofloxacin. No isolate was resistant to meropenem or amikacin. Virulence genes were detected more frequently in isolates expressing hemolytic activity on blood agar plates. The detection rate of faeG was increased in fimH negative isolates. We assume, that hemolytic activity and absence of fimH could be considered as potential indicators for the virulence of E. coli in piglets. View Full-Text
Keywords: antimicrobial resistance; Escherichia coli; fimH; neonatal diarrhea; pigs; post-weaning diarrhea; virulence factors antimicrobial resistance; Escherichia coli; fimH; neonatal diarrhea; pigs; post-weaning diarrhea; virulence factors
►▼ Show Figures 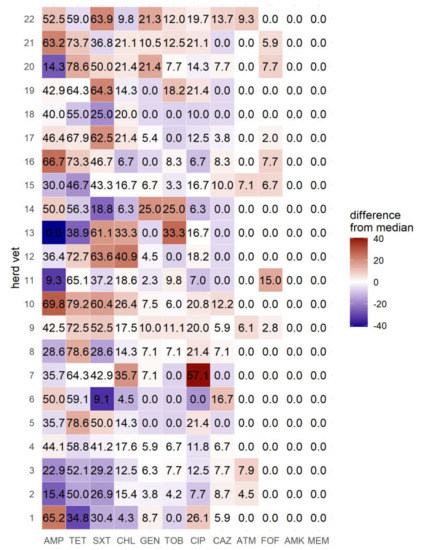