Natural Compounds as Antimicrobial Agents
Next Article in Special Issue

Polyphasic Validation of a Nisin-Biogel to Control Canine Periodontal Disease

Urinary tract infections (UTIs) are the most common and expensive health problem globally. The treatment of UTIs is difficult owing to the onset of antibiotic-resistant bacterial strains. The aim of this study was to define the incidence of infections, identify the bacteria responsible, and identify the antimicrobial resistance profile. Patients of all ages and both sexes were included in the study, all admitted to University Hospital of Campania “Luigi Vanvitelli”, between January 2017 and December 2018. Bacterial identification and antibiotic susceptibility testing were performed using matrix assisted laser desorption ionization-time of flight mass spectrometry (MALDI-TOF MS) and Phoenix BD. Among the 1745 studied patients, 541 (31%) and 1204 (69%) were positive and negative for bacterial growth, respectively. Of 541 positive patients, 325 (60%) were females, while 216 (39.9%) were males. The largest number of positive subjects was recorded in the elderly (>61 years). Among the pathogenic strains, 425 (78.5%) were Gram-negative, 107 (19.7%) were Gram-positive, and 9 (1.7%) were Candida species. The most isolated Gram-negative strain is Escherichia coli (E. coli) (53.5%). The most frequent Gram-positive strain was Enterococcus faecalis (E. faecalis) (12.9%). Gram-negative bacteria were highly resistant to ampicillin, whereas Gram-positive bacteria were highly resistant to erythromycin. View Full-Text
Keywords: urinary tract infection; uropathogen; antibiotic; antimicrobial resistance urinary tract infection; uropathogen; antibiotic; antimicrobial resistance
►▼ Show Figures 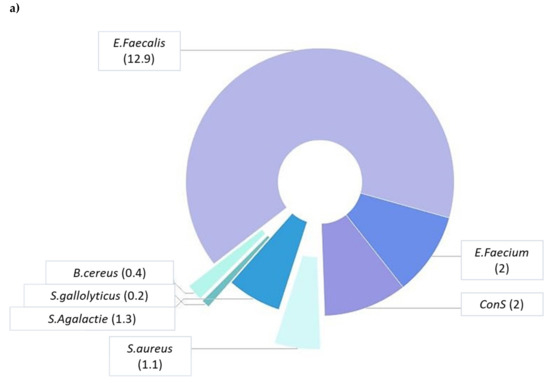