Streptomyces is the most frequently described genus of Actinomycetes, a producer of biologically active secondary metabolites. Indeed, the Streptomyces species produces about 70% of antibiotics and 60% of antifungal molecules used in agriculture. Our study was carried out with the goal of isolating and identifying antimicrobial secondary metabolites from Streptomyces misionensis V16R3Y1 isolated from the date palm rhizosphere (southern Tunisia). This strain presented a broad range of antifungal activity against Fusarium oxysporum, Aspergillus flavus, Penicillium expansum, Aspergillus niger, Candida albicans, Candida metapsilosis, and Candida parapsilosis and antibacterial activity against human pathogenic bacteria, including Escherichia fergusonii, Staphylococcus aureus, Salmonella enterica, Enterococcus faecalis, Bacillus cereus and Pseudomonas aeruginosa. The purification procedure entailed ethyl acetate extract, silica gel column, and thin layer chromatography. Based on 1H NMR metabolomic procedure application, also supported by the GC-MS analysis, cyclic dipeptide (l-Leucyl-l-Proline) was identified as the major compound in the bioactive fraction. In order to confirm the identity of the active compound and to have a large quantity thereof, a chemical synthesis of the cyclic dipeptide was performed. The synthetic compound was obtained with a very good yield (50%) and presented almost the same effect compared to the extracted fraction. This study indicates for the first time that Streptomyces misionensis V16R3Y1 exhibits a broad spectrum of antimicrobial activities, produced cyclic dipeptide (l-Leucyl-l-Proline) and might have potential use as a natural agent for pharmaceutical and agri-food applications. View Full-Text
Keywords: Streptomyces misionensis; antimicrobial activity; cyclic dipeptide (l-Leucyl-l-Proline) Streptomyces misionensis; antimicrobial activity; cyclic dipeptide (l-Leucyl-l-Proline)
►▼ Show Figures 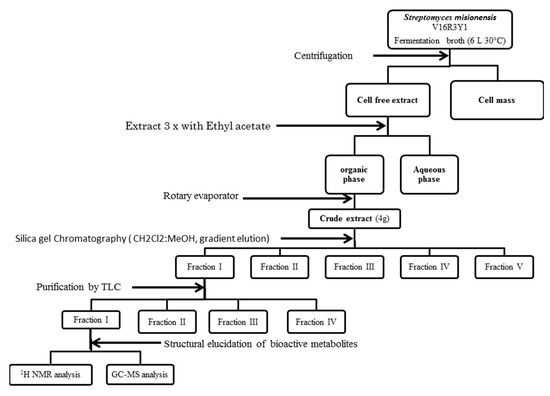