Isolation and Characterization of Pectobacterium Phage vB_PatM_CB7: New Insights into the Genus Certrevirus
Next Article in Special Issue

Crystallography, in Silico Studies, and In Vitro Antifungal Studies of 2,4,5 Trisubstituted 1,2,3-Triazole Analogues

Bacterial resistance to antibiotics has become a public health issue around the world. The present study aimed to evaluate the antibacterial activity of chalcones isolated from flowers of Arrabidaea brachypoda, and their potential as efflux pump inhibitors of Staphylococcus aureus efflux pumps. Microdilution assays were performed with natural products from A. brachypoda. Chalcones 1, 3, 4, and 5 did not show intrinsic antimicrobial activity against all S. aureus strains tested, but they were able to potentiate the Norfloxacin action against the SA1199-B (norA) strain, with a better modulating action for the 4 trimethoxylated chalcone. All chalcones were also able to potentiate the action of EtBr against SA1199-B strain, suggesting a potential NorA inhibition. Moreover, chalcone 4 was able to interfere in the activity of MepA, and interfered weakly in the QacA/B activity. Molecular docking analyzes showed that tested chalcones are capable of binding in the hydrophobic cavity of NorA and MepA, in the same Norfloxacin binding site, indicating that chalcone 4 compete with the antibiotic for the same NorA and MepA binding sites. Association of chalcone 4 with Norfloxacin could be an alternative against multidrug resistant S. aureus over-productive of NorA or MepA. View Full-Text
Keywords: Arrabidaea brachypoda; Chalcone; antimicrobial activity; efflux pumps; efflux pump inhibitors; resistance to antibiotics Arrabidaea brachypoda; Chalcone; antimicrobial activity; efflux pumps; efflux pump inhibitors; resistance to antibiotics
►▼ Show Figures 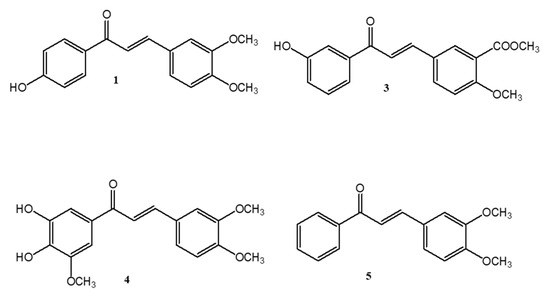