Maria I. Ryabova
4 and

This article is a continuation of our previous work [1], where we suggested a novel solution of CNSES for simulation of ultra-short optical pulse propagation in birefringent fibers. The introduction of our previous work [1] completely reveals the reasons, importance, and necessity of the problem formulation. The main motive of our study was because the designers of fiber optic transmitting and receiving devices lack the tools to determine the shape of distortion of a signal that is transmitted at high power or transmitted over very long distances. Even the commonly-used split-step Fourier method, which gives quite satisfactory results, provides a general solution for the task at hand without particularities. The difference between our previous publication [1] and the current is in a number of propagation modes in the fiber. Birefringent fibers propose propagating two wave modes while few-mode fibers propose propagating up to nine modes. Our goal was to propose a method to solve the system of Schrödinger equations, which allows obtaining more detailed information on the shape of distortions of the signal propagating in the few-mode fiber under various conditions.
It is necessary to emphasize that pulse propagation in fibers with abnormal dispersion is an important investigation theme as femtosecond lasers have an influential position in industrial field [2,3,4,5]. Special optical fibers are developed for transmission of high-power ultrashort pulses [6,7] with accent to polarization maintaining fibers. The negative role of chromatic dispersion appears with increase in the length of the optical fiber communication line. The physical reason for dispersion is the frequency dependence of the phase velocity or phase delay during propagation of electromagnetic waves in the medium. This leads to a violation of the phase vectors in the wave package. When these negative effects are studied, only envelope distortion is usually considered. However, phase distortions are also important for certain classes of problems. For example, the problem of chirping during the propagation of an optical signal in an optical fiber with nonlinear dispersion is one of them.
The first part of the work is devoted to the computing of complex envelop calculations, the second is devoted to the phase velocity or phase delay calculation during the propagation of optical waves in the fibers.

The evolution of optical waves in a fiber can be described by the CNSES as: with the initial and boundary conditions for each propagation mode:
The definitions are used in Equations (1) and (2): Wi—the complex envelope of the optical wave of the i-th mode, α(i)—attenuation of the i-th mode; β(i)1, β(i)2, β(i)3—the first, second and third order dispersion of the i-th mode respectively; γ(i)—parameter of nonlinearity for the i-th mode; Ci,m, Bi,m—coupling coefficients between the i-th and m-th modes; TR—Raman scattering parameter; ω(i)0—angular frequency of the i-th mode; z—coordinate along an optical fiber; t—time, j—imaginary one, TN—final time, and f(i)(t)—known functions at the initial time.
To transfer Equation (1) into dimensionless form, the specific values of the process are used, namely L— length, TN— time, and P—power, by relations:
Replacement of Equation (3) into Equation (1) transforms it into a dimensionless form: where the dimensionless coefficients: and the definitions for the non-linear component: are used.
Equation (1) is specially separated on linear and nonlinear terms, it allows us to realize the numerical integration algorithm based on computing scheme, where all linear terms are written in implicit and all nonlinear terms are written in explicit finite-difference form.

2.2. The Finite-Difference Scheme and Computing Scheme

The Equation system (4) can be simplified by using F(i)(x) terms to denote the right parts of Equation (4):
The finite-difference equivalences for Equation (7), according to [1], have the form: where bottom index k is used to denote the mesh points along the length ξk = Δξ⋅(k − 1) and n is used to denote the dimensionless time mesh points τn = Δτ⋅(n − 1). The dimensionless parameter θ allows to attribute the value of right part of Equation (8) to an arbitrary mesh point with fractional indexes (k + θ, n − ½). The parameter θ ∈ [0, 1], defines the explicit θ = 0 or implicit θ ∈ (0, 1] finite-difference computing scheme. The recommendation for θ parameter choosing was given in [1]. There, it was approved that θ = ½, which leads to stable and reasonable results.
All variables with the k-index in Equation (8) are known as well as all variables with the (k + 1) indexes are known at n equal to 0, 1, 2, and N from Equation (2). The values of F(i) are attributed to middleware virtual mesh points between (k+ θ, n − ½).
The nonlinearity in Φ1(i) and Φ2(i), and a third-order partial derivative by time in Equation (4), require modification of Crank–Nicolson’s method [1,8]. The aim is to use implicit form for linear terms, and explicit form for nonlinear ones. Thus, we separate the F(i) on the sum of linear and nonlinear terms: with the definitions for linear L(i) and non-linear N(i) terms at the k-layer:
For the calculation of the linear terms L(i) on the (k + 1)-th layer, we can just replace k on (k + 1) in Equation (10). For the nonlinear terms on (k + 1)-th layer, we must use finite-difference definition in explicit form:
Hence, the explicit form in Equation (8) is used only for Φ1(i) and Φ2(i), while the implicit form is used for the linear terms. The nonlinear terms Φ1(i) and Φ2(i) in virtual grid point (k, n − ½) are written as:
The desired function values in (k, n − ½) point are written as an average of two adjacent values. The partial derivative from this functions in the mentioned point can be written as central finite-differences with second-order accuracy. It gives the linear equation system for each mode at each integration step:
It is very important to note that the linear Equation system (13) for the i-th mode depends only on x(i)k+1,n unknowns and does not depend on unknowns from other wave modes. It allows solving the linear equation system for the each i-th mode independently. The index n for each linear equation system for the i-th mode begins from 2 up to the N − 1, because the values of xk+1,1, xk+1,2, and xk+1,N are known due to Equation (2).
It should be highlighted that the Equation system (13) decomposes into M independent line equation systems, according to grid node variables x(i)k+1,n (where n begins from 3 and increases to N − 1). Each equation system can be solved separately. These linear equation systems have four-diagonal matrix form, where in addition to the main diagonal, there are one “upper” and two “sub” diagonals. We use the modified Thomas tridiagonal algorithm, which allows us to transform this matrix to triangular form. The described refinement algorithm is used at each integration step. The definition of nonlinear terms (from previous k-th integration layer) explicitly contributes to the error in calculating the values of the new (k + 1)-th layer. The main goal of the proposed refinement algorithm is to introduce iteration of the computation process at each integration step, which corrects the explicit form of nonlinear terms [1].

2.3. The Ultra-Short Pulse Evolution in Fiber

3. The Phase Velocity or Phase Delay Calculation during the Wave Propagation

This paper shows the effectiveness of the proposed method in solving the CNSES for modeling the propagation of pulses formed by a group of highly coupled modes. Developing the results obtained in [1], it is shown that the decomposition of the CNSES at each integration step into a set of independent systems of linear equations makes it possible to include an arbitrary number of propagation modes in the equations and study their mutual influence. A positive comparison of the results obtained using the proposed algorithm with the works of other authors has shown its viability and prospects in order to further improve its characteristics.
Within the framework of the channel model, an analytical solution is obtained. It describes the propagation of an optical pulse in an optical fiber with a varying length. It is shown that the second-order frequency dispersion can lead to the effect of compression of the optical chirp pulse if the dispersion parameter GDD and the rate of change of the frequency ω′ differ in sign, and if their modules are inversely proportional, then the maximum compression takes place, i.e., such a pulse is optimal for a fiber of a given length. This effect can be used for optical pulse pre-distortion. The third-order dispersion increasing with length at the beginning leads to an asymmetry of a pulse with a Gaussian envelope, and then to a collapsing effect when it decays into many short adjacent pulses. At TOD > 0, the collapse appears behind the main pulse, and at TOD < 0, in front of it. In the case of second and third-order dispersion, as the cable length increases, in the beginning, pulse broadening is observed, then its asymmetry appears, and then collapse occurs.

This study did not require ethical approval. 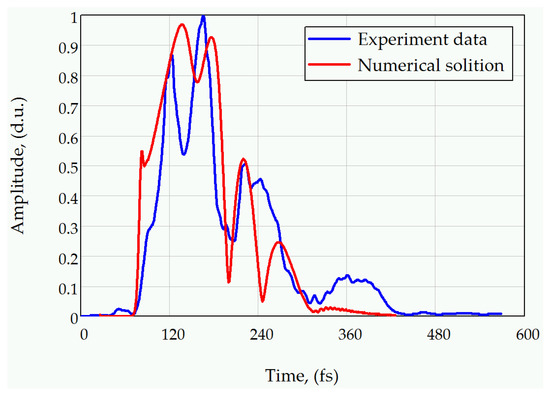 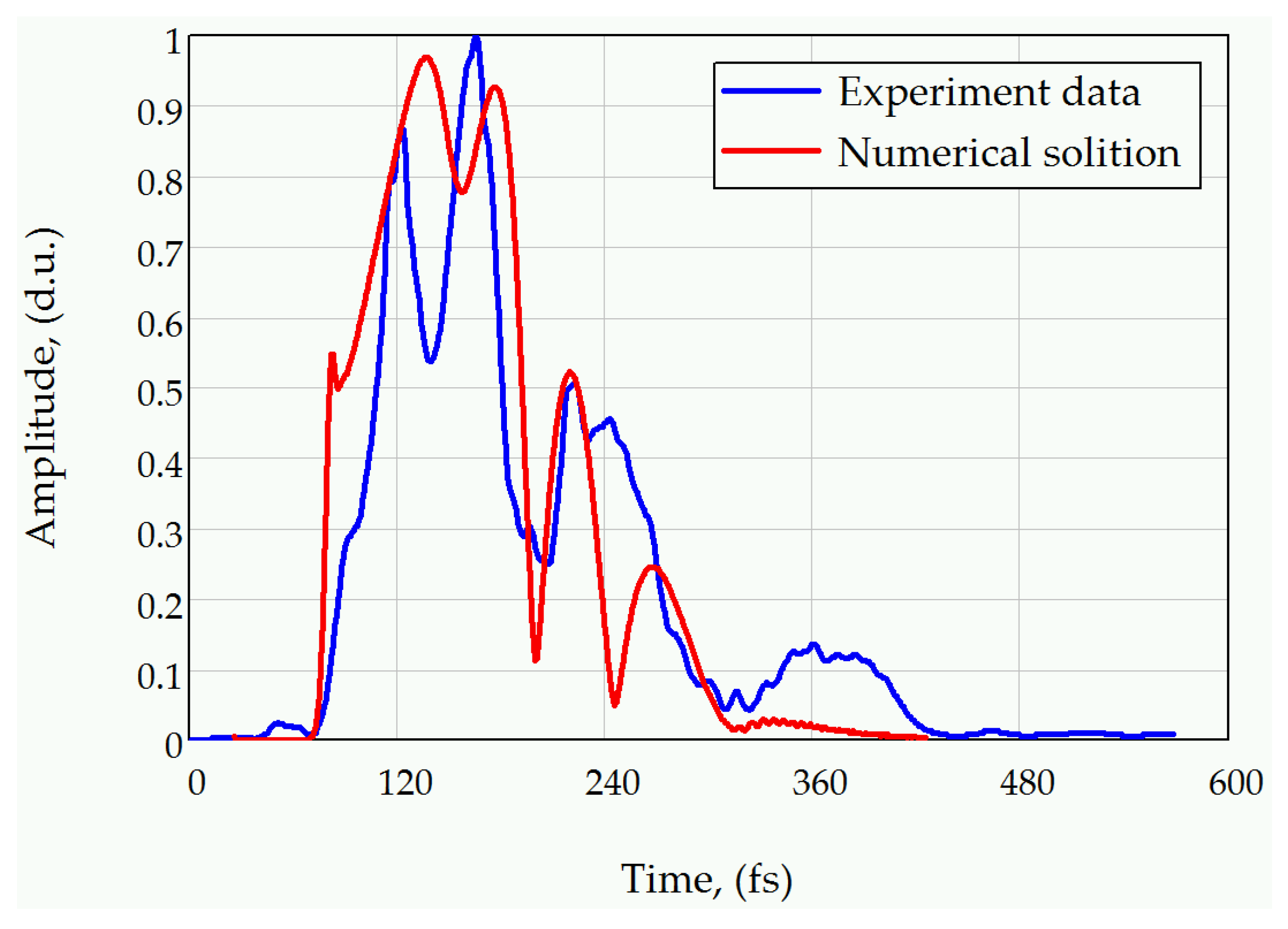 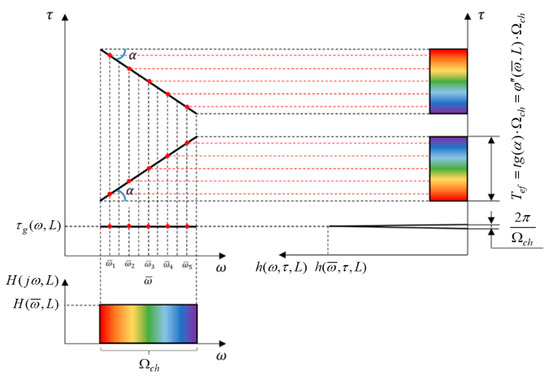 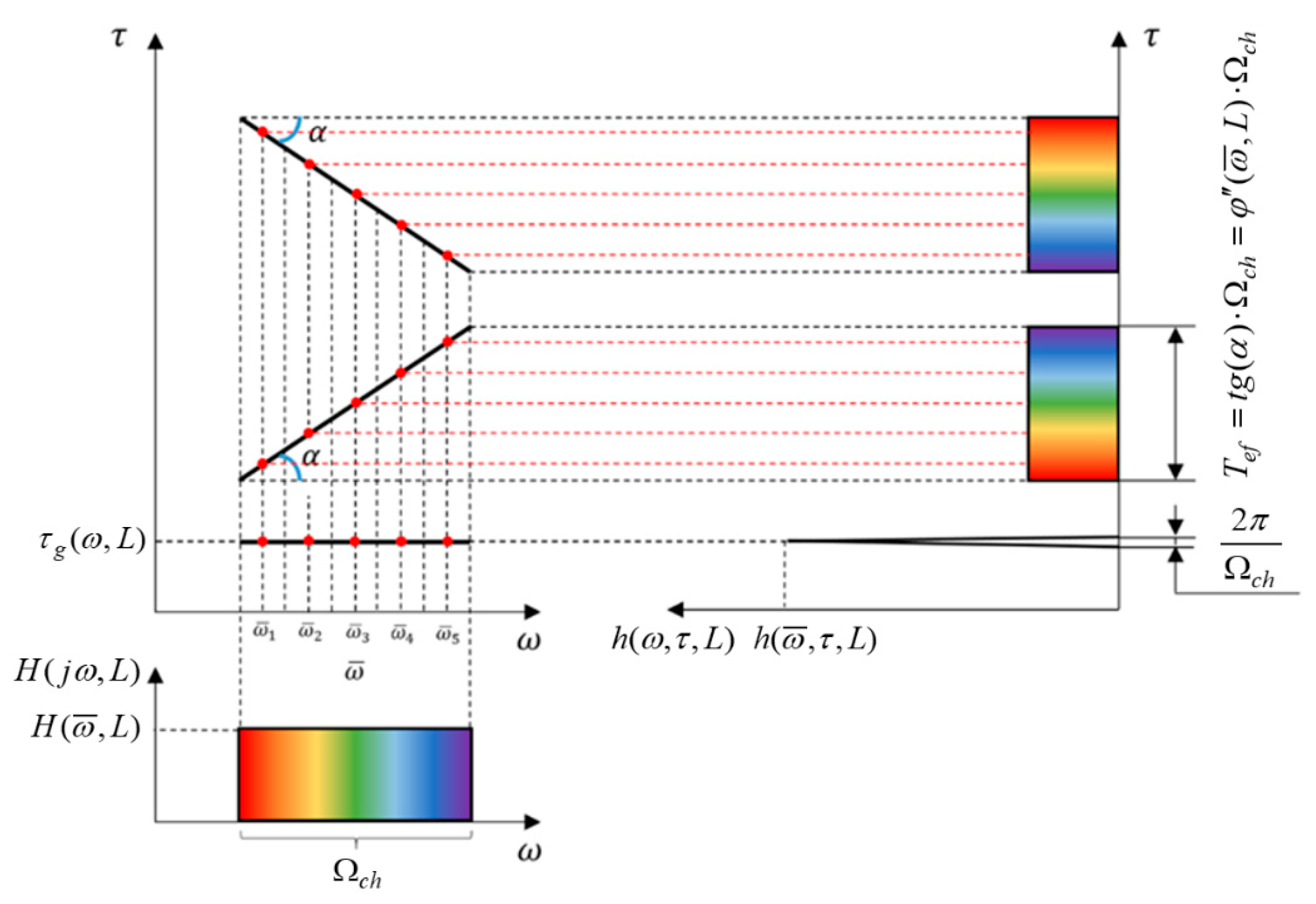 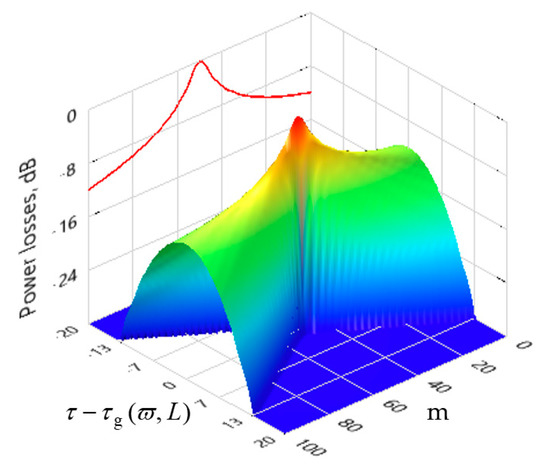 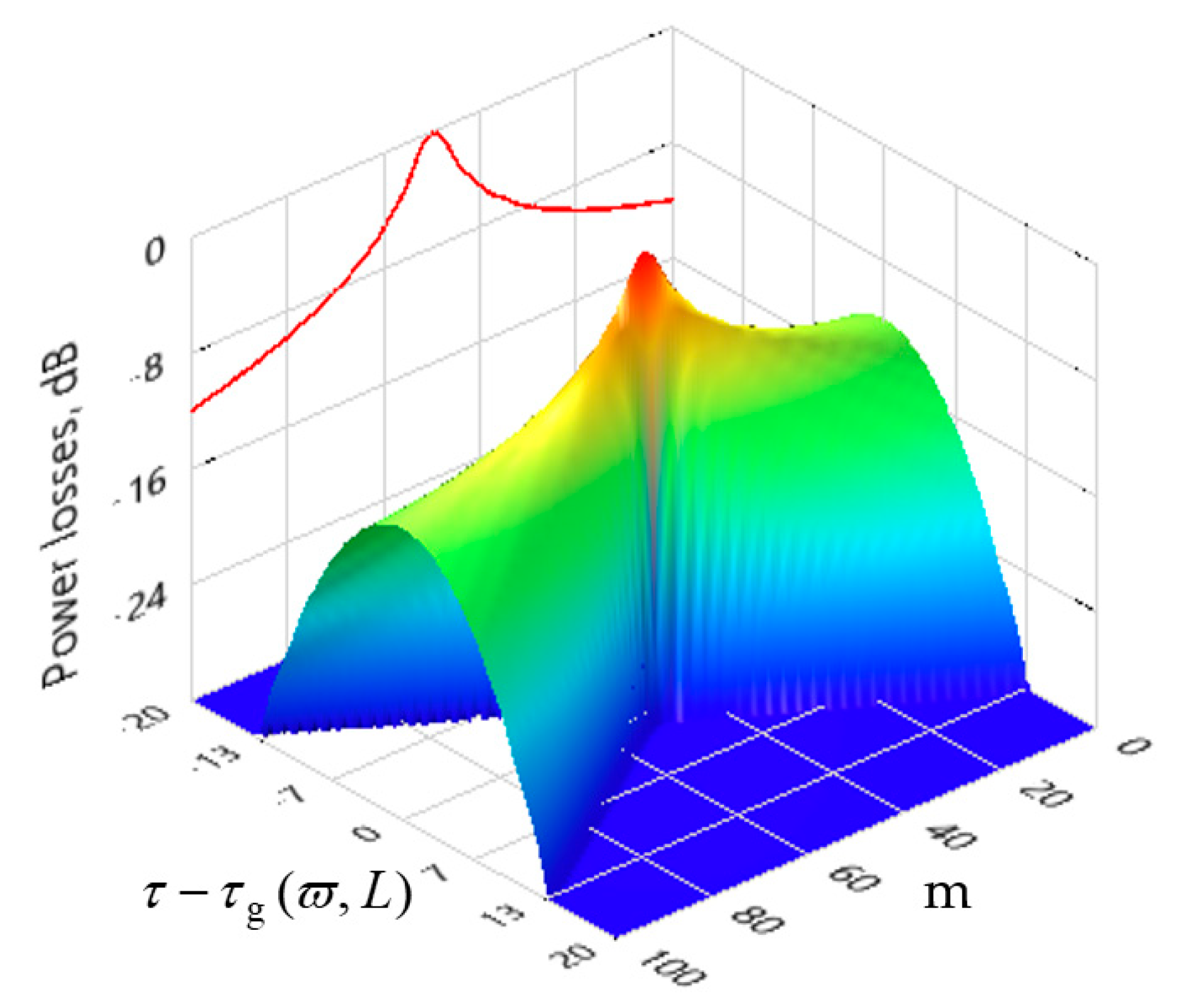