Proportional Integral Derivative (PID) is the most popular controller used in automatic systems, because of its robustness, ability to adapt the behaviors of the system, making them converge toward its optimum. These advantages are valid only in the case of the linear systems, as they present poor robustness in nonlinear systems. For that reason, many solutions are adopted to improve the PID robustness of the nonlinear systems. The optimization algorithm presents an efficient solution to generate the optimums PID gains adapting to the system’s nonlinearity. The regulation speed in the Direct Torque Control (DTC) is carried out by the PID controller, which caused many inconveniences in terms of speed (overshoot and rejection time), fluxes, and torque ripples. For that, this work describes a new approach for DTC of the Doubly Fed Induction Motor (DFIM) powered by two voltage inverters, using a PID controller for the regulation speed, based on a Genetic Algorithm (GA), which has been proposed for adjustment and optimizing the parameters of the PID controller, using a weighted combination of objective functions. To overcome the disadvantages cited at the beginning, the new hybrid approach GA-DTC has the efficiency to adapt to the system’s nonlinearity. This proposed strategy has been validated and implemented on Matlab/Simulink, which is attributed to many improvements in DFIM performances, such as limiting speed overshoot, reducing response time and the rate of Total Harmonic Distortion (THD) of the stator and rotor currents, and minimizing the rejection time of speed and amplitude of the torque and flux ripples. View Full-Text
Keywords: DFIM; GA-DTC; PID; THD; objective functions DFIM; GA-DTC; PID; THD; objective functions
►▼ Show Figures 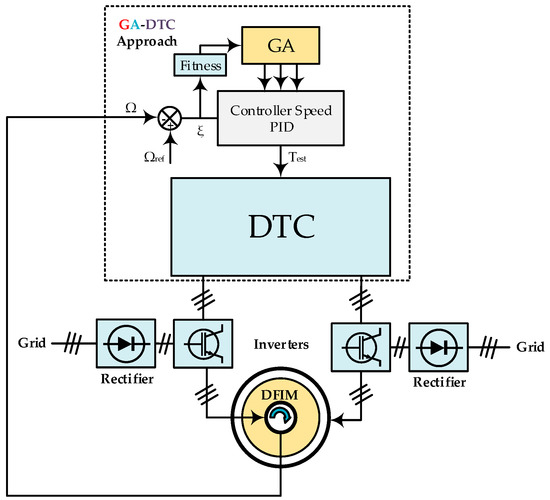