Variability of Air Temperature, Precipitation and Outflows in the Vistula Basin (Poland)
Previous Article in Journal

Metabolites from Macroalgae and Its Applications in the Cosmetic Industry: A Circular Economy Approach

Renewable energy is the key pillar and plays an important role in the energy systems of European Union member states and in mitigating climate change. It is supporting the transition towards a greener, resource-efficient and more competitive, low-carbon European Union economy. Above-average, average and below-average values of monitored indicators in member states of the European Union in 2009–2016 were ascertained by using principal component analysis. Monitored indicators of the renewable energy sector included electricity generation, electricity capacity, investments of public financial institutions, number of employees and turnover achieved from the economic activities related to production, distribution, installation, operation and maintenance of equipment (all of them per capita). Based on the achieved results, we can state that the situation changed during the period under review. Member states have moved between above-average, average and below-average levels of renewable energy indicators. However, a lack of change in the indicators was recorded in some member states throughout the eight-year period (Finland, France, Ireland, Germany, Austria and Spain did not move significantly). Renewable energy sources (hydro, wind, solar, geothermal and energy from biomass) were evaluated as a whole due to different natural, economic and legislative conditions of European Union countries. View Full-Text
Keywords: electricity capacity; electricity generation; employees; principal component analysis; public investments; turnover electricity capacity; electricity generation; employees; principal component analysis; public investments; turnover
►▼ Show Figures 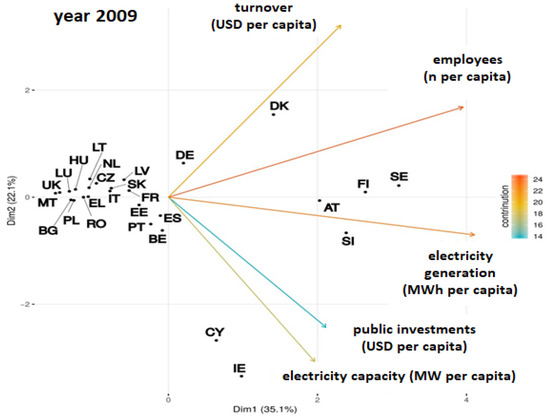