Food Antioxidants and Their Anti-Inflammatory Properties: A Potential Role in Cardiovascular Diseases and Cancer Prevention
Next Article in Special Issue

Detection of Alphacoronavirus vRNA in the Feces of Brazilian Free-Tailed Bats (Tadarida brasiliensis) from a Colony in Florida, USA
Previous Article in Journal / Special Issue

The genomes of single-stranded RNA (ssRNA) viruses have complex secondary structures, maintained both through conventional and non-Watson-Crick base-pairing [1,2]. Coronaviruses have the largest genomes of RNA viruses and have been shown to have several highly conserved secondary structures both in the 5′ and 3′ end of their genomes [1]. These structural motifs mainly function through protein binding or through direct RNA-RNA interactions. Some of these elements function merely as ‘spacer elements’, where neither the primary nor the secondary structure are critical [3]. In other cases, the stem-loop structure itself seems essential and base-pairing nucleotides may be substituted [4]. More complex structures, such as the 54-nucleotide hairpin-type pseudoknot, appear to be conserved both in structure and location, but not in sequence [5]. For most of these elements, the exact mechanism of function is unknown, but virus replication, viability and transcription are the main functional categories.
A 43-nucleotide genetic element with a highly conserved secondary (as well as primary and tertiary) structure has been described in four different families of positive-sense ssRNA viruses, Astroviridae, Caliciviridae, Picornaviridae and Coronaviridae [6]. The presence of this element in four distantly related groups of viruses and the scattered distribution within these groups has led to the conclusion that viruses have the ability to acquire it horizontally [6]. The 3′ stem-loop structure, referred to as s2m, was originally described in astroviruses where it appears to have been present in the last common ancestor [6,7,8], but the element has been most thoroughly studied in the SARS coronavirus (SARS-CoV) where the three-dimensional crystal structure has been resolved to 2.7 A resolution [9]. The function remains obscure, but current hypotheses include hijacking of host protein synthesis through interactions with ribosomal proteins [9] and RNA interference (RNAi) via processing of the s2m elements into a mature microRNA [6]. In coronaviruses, the highly conserved nature of the element has also allowed the development of a PCR-based virus discovery strategy [10].
The presence of s2m near the 3′ end of some coronavirus genomes has been documented previously [6,11], but due to the exponential growth of gene sequence data available through public databases, this review is an update on the current status of s2m in this virus family. The evolutionary history is discussed and different hypotheses for the possible function of s2m are presented in light of recent progress in virus genomics.

2. Coronavirus Phylogeny and Distribution of s2m

A total of 20,068 coronavirus nucleotide sequences have been deposited in the current version of Genbank, and when translated into amino acid sequences, the complete ORF1ab polyprotein sequence could be found for 1113 of these entries. A phylogenetic analysis was performed using aligned ORF1ab sequences (Figure 1), and numerous clusters of nearly identical accessions could be identified. The largest group comprised 328 sequences from the porcine epidemic diarrhea virus (328 OTUs). Many smaller clusters were also found, encompassing two to 183 sequences, and all serogroups were monophyletic with 100% bootstrap support (Figure 1).
To get an overview of the current status for s2m in coronaviruses, all coronavirus nucleotide sequences were screened for the presence of the s2m motif using the strategy described by Tengs et al. [6]. The consensus sequence CGNGG(N)CCACGNNGNGT(N)ANNANCGAGGGT(N)ACAG was used as bait, allowing for possible insertions (N) and/or a single mismatch. Further, 708 of 20,068 (3.5%) of the sequences were found to contain the s2m motif (Table 1). However, s2m was not found in alpha coronaviruses and also appears to be absent in the Torovirus genus as well as the recently described Bafinivirus genus [12], albeit only a small number of sequences were available from the two latter groups. In all instances, the s2m sequence was found in the non-coding, 3′ end of the genome. Looking at coronavirus accessions annotated as ‘complete genome’, more than a third of the genomes appeared to be s2m-containing (Table 1). Many sequences have been generated using targeted (PCR-based) approaches that might not include the non-coding parts of the genome. This could explain why s2m appears to be approximately 10 times more common in complete genome sequences than in shorter GenBank submissions (Table 1).
Three phylogenetic clusters were found to contain s2m (Figure 1). All of these groups were supported by 100% bootstrap values and thus are genetically distinct from related viruses not containing the element. Multiple hypothesis can be proposed in order to explain the distribution of s2m within the coronaviruses, including a model where s2m was present in the last common ancestor of this virus group and subsequently lost multiple times. However, given the mobile nature of the motif, a more parsimonious explanation includes two (or more) independent gains and a small number of losses. The gain of s2m at the base of the SARS-cluster (edge 1 in Figure 1) would not assume any losses in the beta coronaviruses, but for the gamma/delta coronavirus cluster, the evolutionary history seems to be more complicated. A gain at edge 4 would require multiple independent losses. There was no significant bootstrap support separating the Wigeon coronavirus and the Night-heron coronavirus sequences, so a monophyletic origin for these two strains could not be excluded. Loss in the common ancestor of this group combined with loss prior to the divergence of the Bottlenose dolphin coronavirus and the Beluga Whale coronavirus (edge 3) would thus indicate one gain and two independent losses. One could also hypothesize two independent gains (edge 2 and 5) in order to explain the s2m distribution in the gamma/delta cluster (Figure 1).
Looking at topology and branch lengths, branch 1 (Figure 1) represents the shortest edge connecting an s2m-containing cluster with a virus strain not containing s2m. s2m is absent in Rousettus bat coronavirus HKU9, which is a cluster of eight nearly identical sequences basal to the SARS(-like) group. Rousettus bat coronavirus is thus far the only member of lineage D within the betacoronaviruses [13]. The most likely mechanism for transfer of the s2m element from one viral genome to another is through genetic recombination [6]. Recombination events are very common in single-stranded RNA viruses and have played an important role in the evolution of coronaviruses [14]. Nucleotide dot plot analyses of the Rousettus bat coronavirus versus the closest relatives in the SARS(-like) group revealed a high degree of sequence similarity in central parts of the genome, but did not identify any specific locus for recombination.

3. Sequence and Secondary Structure of s2m

Excluding sequences with ambiguous bases, a total of 37 different s2m genotypes were found within the coronavirus sequences (Figure 2). The great majority of the sequences could be folded into the canonical s2m stem-loop structure (Figure 3), albeit a single sequence had an insertion in the second stem-forming motif (Figure 1; Infectious bronchitis virus DPI) and some of the sequences require non-Watson-Crick base-pairing, such as the wobble base-pair G-U [15], in order to obtain the correct secondary structure. All clusters of identical s2m sequence groups were derived from viruses representing the same serogroups (beta, gamma or delta), indicating no recent transfers of the s2m element between these coronavirus clusters.

This work was funded internally by the Norwegian Veterinary Institute. 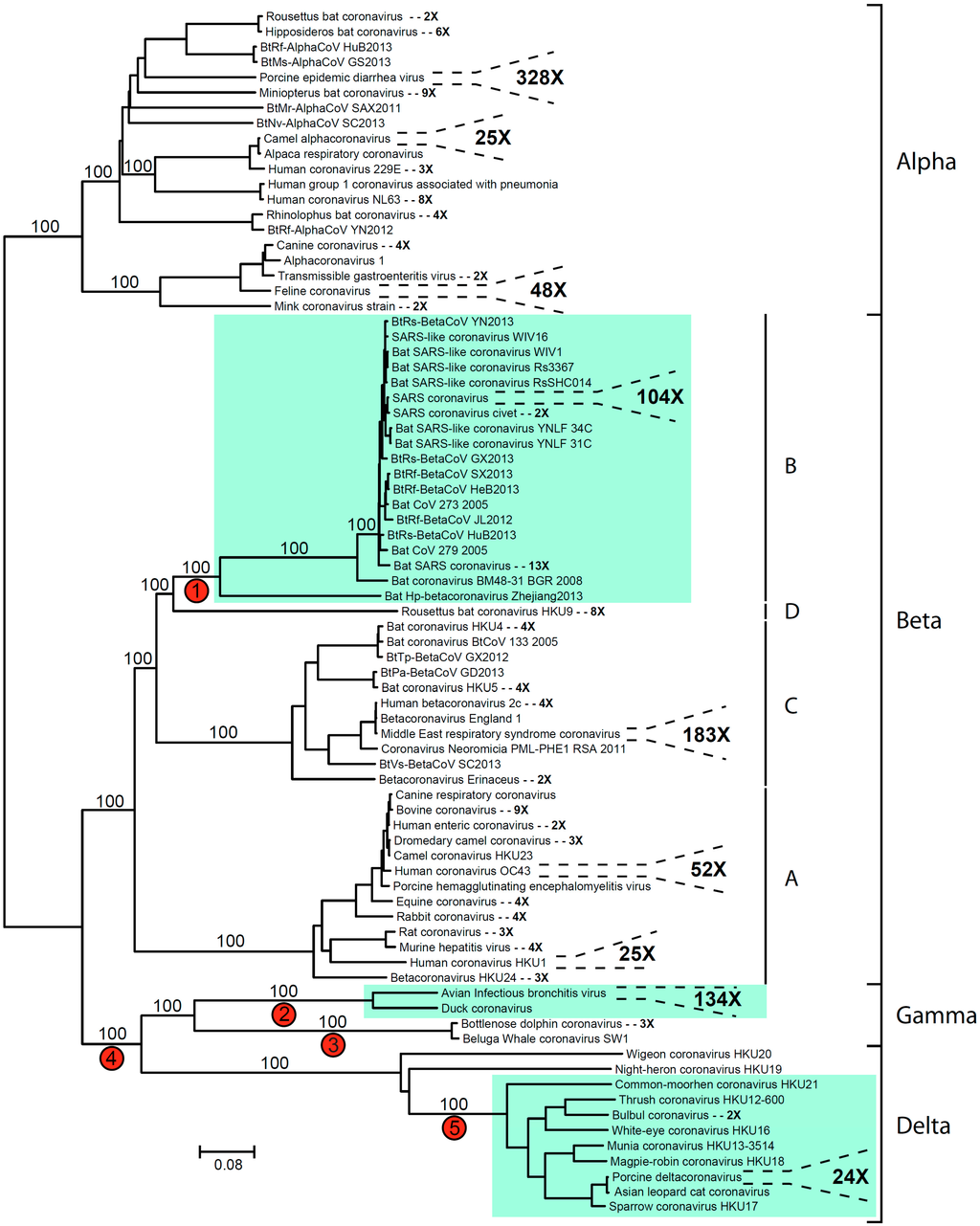 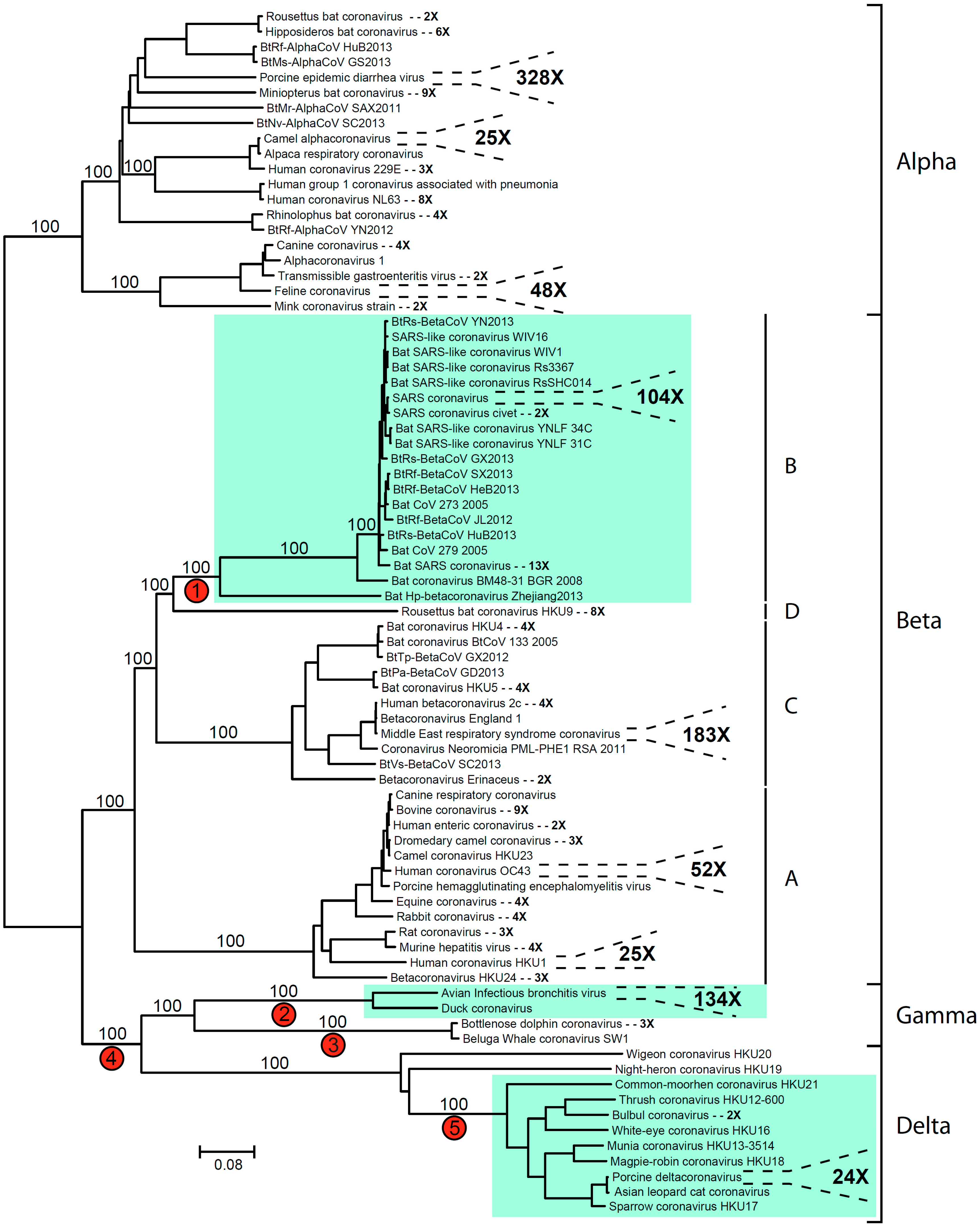 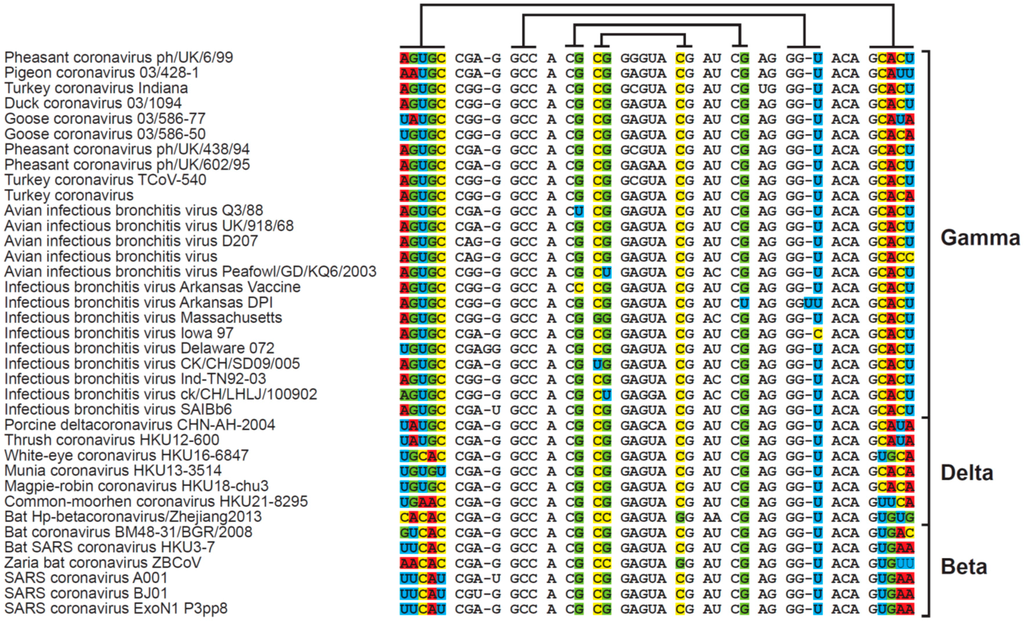 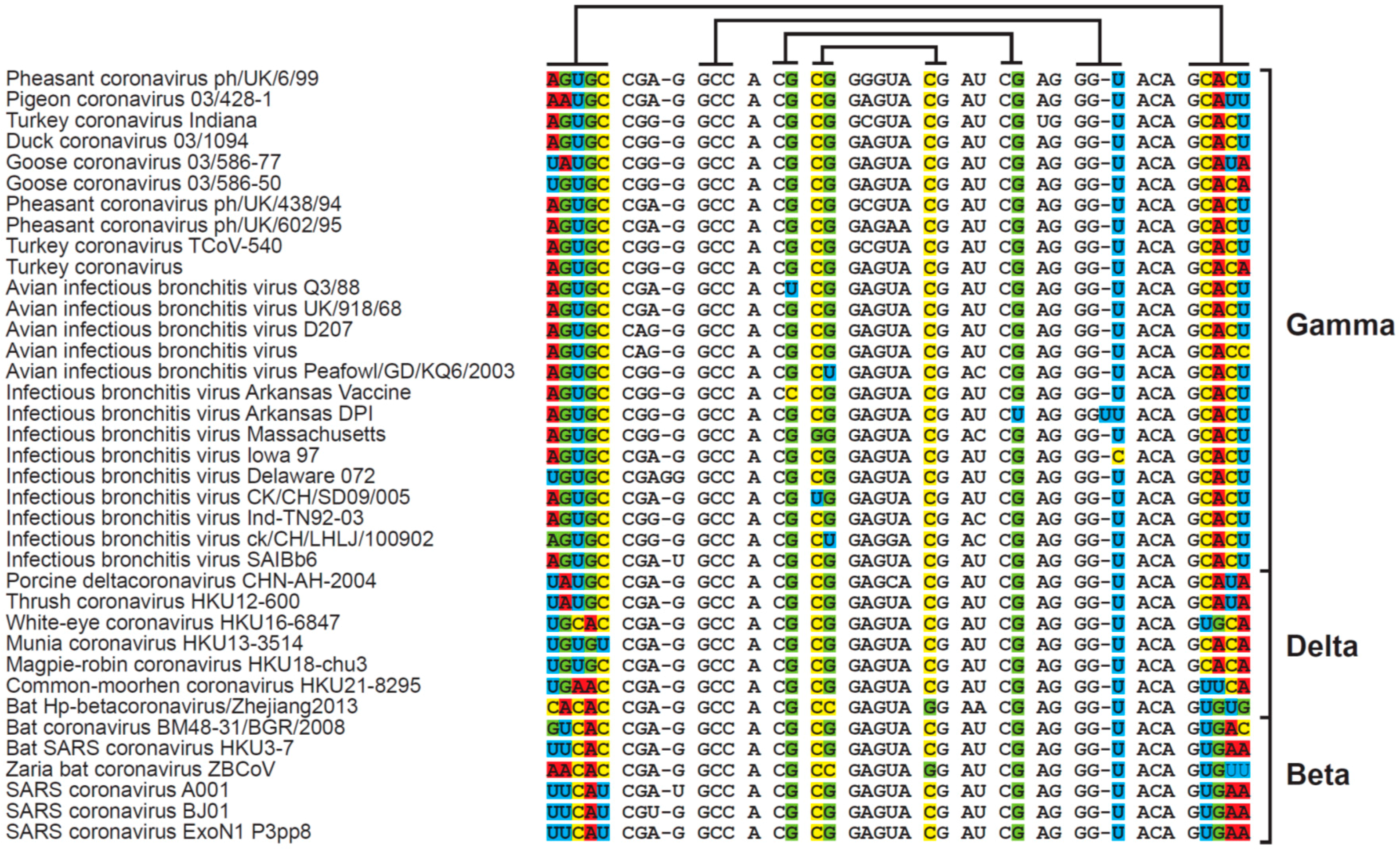