Proctitis Caused by Mycobacterium avium-intracellulare in an HIV-Infected Patient

Zika Virus and the Risk for Renter Households

Recent research on family income indicates that a lack of economic stability can affect healthy housing. Those with limited resources experience higher rates of inadequate and unstable housing many times forcing them to live in undesirable communities in which there can be several community-level health-related issues. One community-level health-related factor of concern has been the reemergence of Zika virus. Some research has indicated that a higher risk of catching Zika virus may exist in neighborhoods and areas with unhealthy housing. Therefore, this study sought to explore the existence of a relationship between rental housing and the Zika virus. Our findings indicated a significant correlation existed between renter occupied household units and the presence of Zika virus. This finding is notable as it indicates that renters have a higher chance of contracting Zika virus than non-renters. Future research should further examine the demographic and housing situation in other communities reporting cases of the Zika virus.
Keywords: social determinants of health; Zika virus; renters social determinants of health; Zika virus; renters

Social determinants of health have a significant impact on the heath of individuals [1,2]. The environments in which people are born, live, learn, work, play, worship, and age affect a wide range of health, functioning, and quality-of-life outcomes and risks [1]. According to Healthy People 2020 five key determinants of health exist: education, social and community context, health and health care, neighborhood, and built environment and economic stability [3].
Recent research on economic stability indicates that, generally, higher income is linked to better health. The greater a person’s income is, the lower that person’s likelihood of disease and premature death [4]. For example, poor adults are almost five times as likely to report being in fair or poor health as adults with family incomes at or above 400 percent of the federal poverty level [5]. Low-income American adults have higher rates of heart disease, diabetes, stroke, and other chronic disorders than wealthier Americans [6].
In addition to negatively influencing physical health, a lack of economic stability can affect healthy housing. A healthy home is sited, designed, built, renovated, and maintained to support health [7]. Those with limited resources experience higher rates of inadequate and unstable housing. A lack of economic stability can preclude individuals from being able to afford to live in healthier, more desirable areas leading them to struggle with the challenges related to a variety of community-level health-related factors [6].
One community-level health-related factor of concern has been the reemergence of Zika virus. Zika is a virus spread through the bite of the as Ae. aegypti and Ae. albopictus mosquito, sex and from a pregnant woman to the fetus and can cause fever, rash, headache, joint pain, red eyes, muscle pain and microcephaly in unborn children [8].
Some research has indicated that a higher risk of catching Zika virus may exist in neighborhoods and areas with unhealthy housing [9]. Therefore, this study sought to explore the existence of a relationship between housing and the Zika virus. This analysis was exempt from Institutional Review Board (IRB) approval because it utilized existing data that were publically available and in which the subjects could not be identified.

Data regarding Zika virus occurrences in Cameron County were acquired from Cameron County Department of Health and Human Services. Demographic and socioeconomic information was collected using data from the Environmental Systems Research Institute (ESRI), Community Analyst and the US Census. Eight demographic and socioeconomic variables were gathered as the independent variables.

The number of Zika virus cases in Cameron County was gathered to identify the possibilities to either prevent or reduce to the spread of Zika virus across the area.

The independent variables were: the Hispanic Population Percentage, (Hispanic refers to a person of Cuban, Mexican, Puerto Rican, South or Central American), the Vulnerable People’s Age Percentage (The percentage of people who are less than age 9 and more than age 65), Renter Occupied Housing Units Percentage, (Renter Occupied refers to a housing unit wherein the dweller pays to live in a housing unit owned by someone else), Vacant Housing Units Percentage, Median Disposable Income per Household, (Median Disposable Income refers to the amount of funds a household has after spending for bills), Average Household Size, Average Money Available per Person per Household and Higher Education Percentage (The percentage of the people who has at least a bachelor’s degree, graduate/professional degree or an associate degree) in each selected Zip code in Cameron County.

Using the Social Determinants of Health as a framework, we sought to explore the potential existence of a relationship between housing and Zika virus. Our findings indicated a significant correlation existed between renter occupied household units and the presence of Zika virus. This finding is notable as it indicates that renters have a higher chance of contracting Zika virus than non-renters.
Exploring why renters have a higher chance of contracting Zika virus is essential to public health efforts. Specifically, understanding the demographics of renters will enable us to make progress towards prevention. We believe that one of the most significant characteristics of renter demographics to consider is income. According to the Joint Center for Houston of Harvard University, renters are becoming increasingly concentrated at the lowest income levels. By 2010, approximately 70% of renter households had incomes below the national median and more than 40% had incomes in the bottom quartile [11]. Furthermore, the National Multi Family Housing Council reported that 51% of renters had a household income less than $34,999 per year [12].
Income-related constraints result in several notable challenges. Families and individuals with tight budgets may experience financial barriers to moving to a better housing [10]. Because they cannot afford to move, they may be forced to live in rental units with substandard or unhealthy conditions, such as housing without air-conditioning, window screens or proper insulation. Such housing conditions provide the perfect opportunity for airborne vectors, such as Ae. aegypti and Ae. albopictus (the mosquitoes responsible for the spread of the Zika virus) to enter living units.
In addition to the housing itself, the neighborhoods in which affordable housing is available may experience community-level health-related circumstances that contribute to the spread of the Zika virus and other communicable diseases spread by the Ae. aegypti and Ae. albopictus, in particular Dengue, Chikungunya and yellow fever. Insufficient sanitation such as inadequate trash collection or illegal dumping can contribute to the spread of the Zika virus by collecting rainwater and providing a breeding ground for mosquitoes. Therefore, the conditions of the neighborhood coupled with the conditions of affordable housing leaves renters vulnerable to conditions that are prime for the spread of Zika and other communicable diseases [6,13,14].

Results of this study are limited due to the small sample size. Future research should examine the demographic and housing situation in other communities reporting cases of the Zika virus.

A.S. and J.H. conceived the idea for this research. A.S. collected the data, analyzed the results and drafted the first manuscript. M.H., H.R. and R.K. completed the data analysis and completed the methods section. J.H. completed the map. All authors reviewed and participated in the revision of the article. 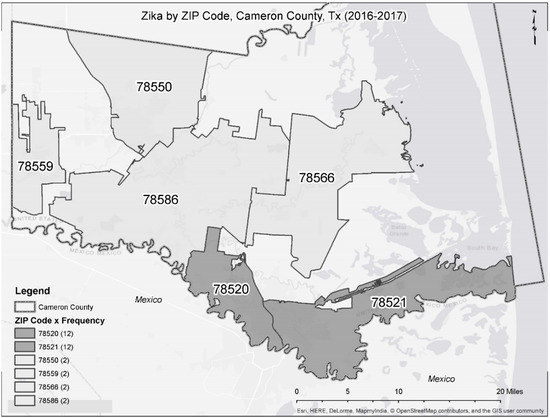 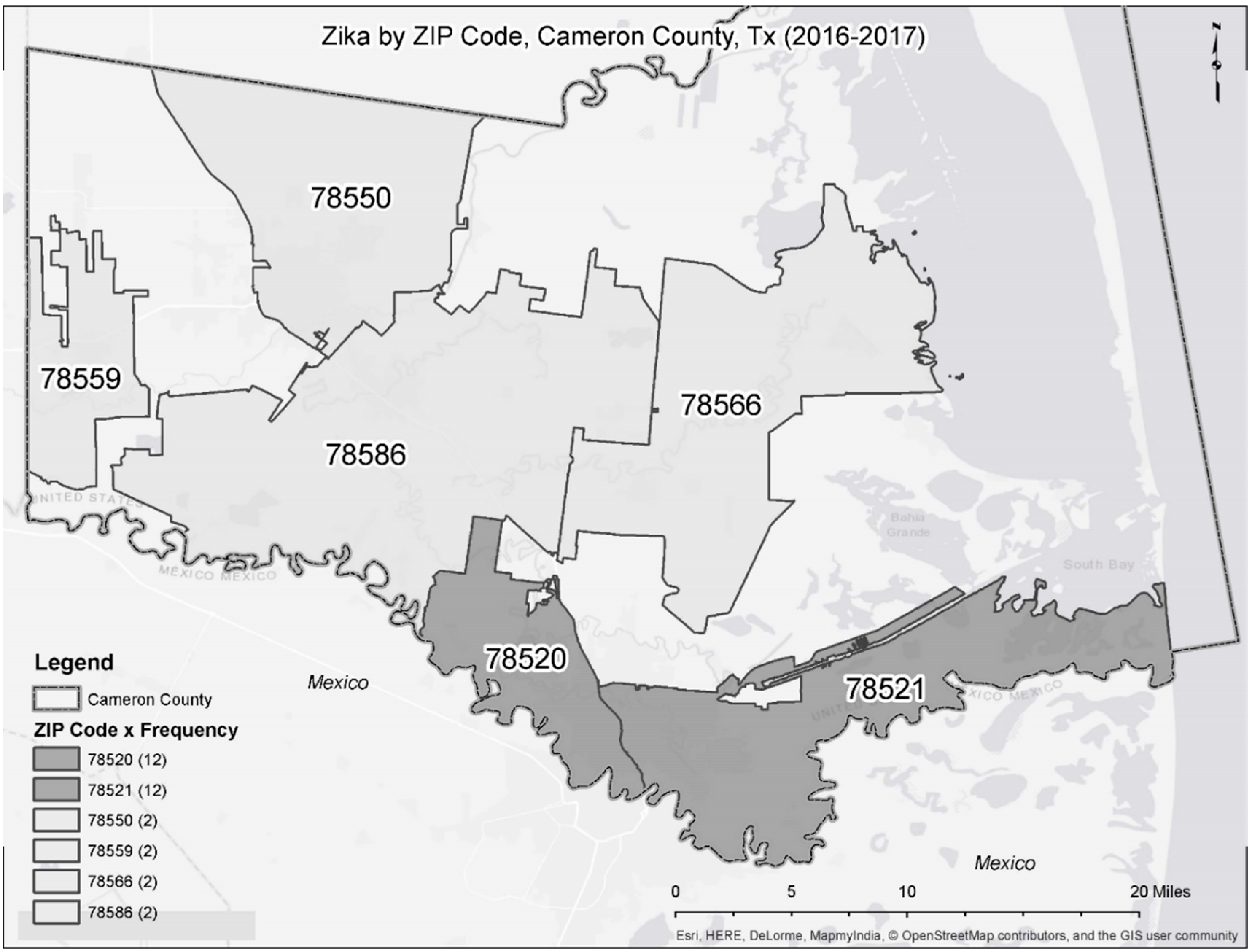 Table 3. Mann-Whitney Test Statistics.
Table 3. Mann-Whitney Test Statistics.
a Exact Significance is not corrected for ties.
© 2018 by the authors. Licensee MDPI, Basel, Switzerland. This article is an open access article distributed under the terms and conditions of the Creative Commons Attribution (CC BY) license (http://creativecommons.org/licenses/by/4.0/).
We use cookies on our website to ensure you get the best experience. Read more about our cookies here.
Accept
We have just recently launched a new version of our website. Help us to further improve by taking part in this short 5 minute survey here. here.
Never show this again