Perceptions on Adherence to Dietary Prescriptions for Adults with Chronic Kidney Disease on Hemodialysis: A Qualitative Study
Previous Article in Journal

Association between Biofilm-Production and Antibiotic Resistance in Uropathogenic Escherichia coli (UPEC): An In Vitro Study

Urinary tract infections (UTIs) are among the most common infections requiring medical attention worldwide. The production of biofilms is an important step in UTIs, not only from a mechanistic point of view, but this may also confer additional resistance, distinct from other aspects of multidrug resistance (MDR). A total of two hundred and fifty (n = 250) Escherichia coli isolates, originating from clean-catch urine samples, were included in this study. The isolates were classified into five groups: wild-type, ciprofloxacin-resistant, fosfomycin-resistant, trimethoprim-sulfamethoxazole-resistant and extended spectrum β-lactamase (ESBL)-producing strains. The bacterial specimens were cultured using eosine methylene blue agar and the colony morphology of isolates were recorded. Antimicrobial susceptibility testing was performed using the Kirby–Bauer disk diffusion method and E-tests. Biofilm-formation of the isolates was carried out with the crystal violet tube-adherence method. n = 76 isolates (30.4%) produced large colonies (>3 mm), mucoid variant colonies were produced in n = 135 cases (54.0%), and n = 119 (47.6%) were positive for biofilm formation. The agreement (i.e., predictive value) of mucoid variant colonies in regard to biofilm production in the tube-adherence assay was 0.881 overall. Significant variation was seen in the case of the group of ESBL-producers in the ratio of biofilm-producing isolates. The relationship between biofilm-production and other resistance determinants has been extensively studied. However, no definite conclusion can be reached from the currently available data. View Full-Text
Keywords: urinary tract infections; uropathogen; Escherichia coli; biofilm; colony morphology; antibiotic; resistance; crystal violet urinary tract infections; uropathogen; Escherichia coli; biofilm; colony morphology; antibiotic; resistance; crystal violet
►▼ Show Figures 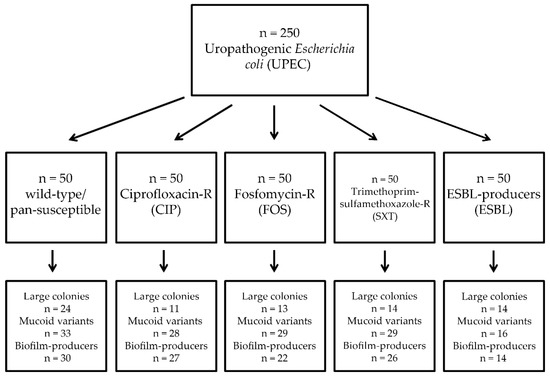