Incidence of Myocardial Injury in COVID-19-Infected Patients: A Systematic Review and Meta-Analysis

Newly Reported Studies on the Increase in Gastrointestinal Symptom Prevalence with COVID-19 Infection: A Comprehensive Systematic Review and Meta-Analysis

Background and Aim: Although constitutional and respiratory symptoms such as cough and fever are the most common symptoms in patients infected with COVID-19, gastrointestinal (GI) tract involvement has been observed by endoscopic biopsies. Multiple GI symptoms, including diarrhea, nausea or vomiting and abdominal pain, have also been reported. This review aims to present the currently available data regarding the GI symptoms of COVID-19 patients, and to compare the frequency of GI symptoms in early stage (Eastern) mostly Chinese data to the current stage (Western) non-Chinese data. Methods: We performed a systematic literature search to identify both published studies by using PubMed, Google Scholar, and CNKI (Chinese medical search engine), and yet unpublished studies through medRxiv and bioRxiv. We also reviewed the cross references of the detected articles. We conducted a Medical Subject Headings (MeSH) search up until 20 September 2020. We pooled the prevalence of symptoms of diarrhea, anorexia, nausea, vomiting, and abdominal pain by using the Freeman–Tukey’s transforming random effect model. Results: A total of 118 studies were included in the systematic review and 44 of them were included in the meta-analysis. There was a significant heterogeneity between the studies; therefore, the random effects model was used. The pooled prevalence estimate of any GI symptoms reported was found to be 0.21 (95%CI, 0.16–0.27). Anorexia was the most commonly reported GI symptom at 18% (95%CI, 0.10–0.27) followed by diarrhea at 15% (95%CI, 0.12–0.19). Diarrhea, abdominal pain, nausea/vomiting, and respiratory symptoms were more common in non-Chinese studies. The prevalence of abdominal pain was lower in the “inpatient-only” studies when compared with studies that included outpatients only and those including both inpatients and outpatients. Conclusions: In this comprehensive systematic review and meta-analysis study, we observed higher rates of diarrhea, nausea/vomiting, and abdominal pain in COVID-19 infected patients among non-Chinese studies compared to Chinese studies. We also observed a higher prevalence of GI symptoms in Chinese studies than was reported previously. Non-respiratory symptoms, including GI tract symptoms, should be more thoroughly and carefully evaluated and reported in future studies. View Full-Text
Keywords: COVID-19; gastrointestinal symptom; systematic review; meta-analysis; diarrhea; nausea; vomit; abdominal pain COVID-19; gastrointestinal symptom; systematic review; meta-analysis; diarrhea; nausea; vomit; abdominal pain
►▼ Show Figures 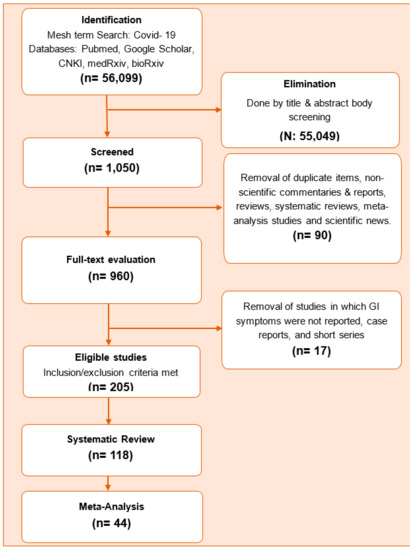