Submit to Diseases Review for Diseases 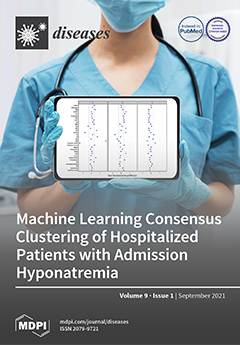 Cover Story (view full-size image): In this study, the unsupervised machine learning consensus clustering algorithm identified a total of three unique patient clusters of hyponatremia based on demographic information, principal diagnoses, comorbidities, and laboratory data. The three clusters represented clinically distinct subgroups derived from multidimensional baseline data, and carried different mortality risk. View this paper
Previous Issue
Volume 9, June
Next Issue
Volume 9, December
We use cookies on our website to ensure you get the best experience. Read more about our cookies here.
Accept
We have just recently launched a new version of our website. Help us to further improve by taking part in this short 5 minute survey here. here.
Never show this again