Glimepiride is an antidiabetic drug which is one of the third generation sulfonylureas. It belongs to class II, according to the BCS (Biopharmaceutical Classification System), which is characterized by low solubility and high permeability. The aim of this work was to formulate glimepiride as solid dispersion using water-soluble carriers to enhance its aqueous solubility and thus enhance its bioavailability. Nine formulations of glimepiride solid dispersion were prepared by a solvent evaporation technique using three different carriers (mannitol, polyethylene glycol 6000, and β-cyclodextrin) with three different drug carrier ratio (1:1, 1:3, and 1:6). Formulation variables were optimized using 32 full factorial design. The prepared formulations were evaluated for production yield, drug content, micromeritic properties, thermal analysis, in-vitro release, and in-vivo hypoglycemic effect. All prepared formulations showed high production yield ranged from 98.4 ± 2.8 to 99.8 ± 2.2% and high drug content in the range of 97.2 ± 3.2 to 99.6 ± 2.1%. The micromeritic properties revealed that all prepared glimepiride formulations showed good flowability. The differential scanning calorimetry study revealed the presence of the drug in the more soluble amorphous form. In accordance with the results of in vitro release study, it was found that the solubility of glimepiride was increased by increasing the drug carrier ratio, compared with the pure form of the drug. It was found that F9 showed a high and rapid reduction in blood glucose levels in diabetic rats, which indicated the success of a solid dispersion technique in improving the solubility and hence the bioavailability of glimepiride. View Full-Text
Keywords: solid dispersion; solvent evaporation; solubility enhancer; polyethylene glycol (PEG); β-cyclodextrin; mannitol solid dispersion; solvent evaporation; solubility enhancer; polyethylene glycol (PEG); β-cyclodextrin; mannitol
►▼ Show Figures 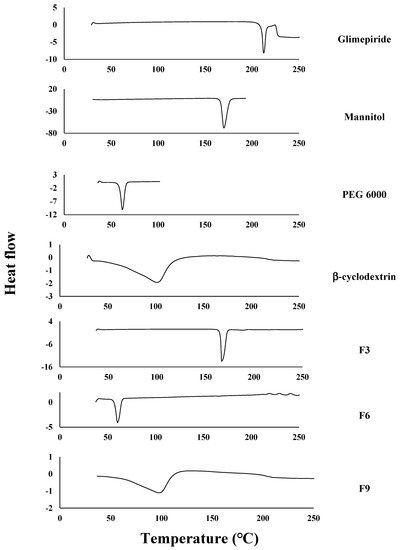