Development of a Novel, Fast, Simple HPLC Method for Determination of Atorvastatin and its Impurities in Tablets

Our main target and concept was to develop a method for the determination of the most prescribed antilipemic drug, atorvastatin, together with its related substances, with a single sample preparation and during a single chromatographic run, in the shortest possible period of time, with the lowest possible mobile phase consumption. A new rapid, simple chromatographic method for the determination of atorvastatin and its main specified impurities was developed, using different chromatographic columns. With this new concept of a mobile phase and a powerful core–shell, or a superficially porous silica-based column, satisfactory results for targeted parameters, such as critical peak resolution, run time length, and column backpressure, were achieved. The analysis is performed within a run duration of less than 15 min, which is about six times shorter than the official European Pharmacopoeia method. The chromatogram performances suggests that the method limit of quantification (LOQ) can be about 7 times lower, and the limit of detection (LOD) about 20 times lower, using an injection volume of only 2 µl. This was confirmed by the performed method validation in accordance with the International Conference on Harmonization (ICH) guideline for the validation of analytical procedures Q2(R1), where the selectivity, linearity, accuracy, precision, limit of quantification, and limit of detection were tested and confirmed.
Keywords: atorvastatin; impurities; liquid chromatography; method optimization; tablets atorvastatin; impurities; liquid chromatography; method optimization; tablets

Statins are members of the anti-atherosclerotic drugs intended to treat and prevent the main cause of hypertension and coronary heart diseases. They are widely used in clinical practice with high recommendation and high efficiency. Atorvastatin, (3R,5R)-7-[2-(4-Fluorophenyl-5-isopropyl-3-phenyl-4-(phenyl-carbamoyl)-1H-pyrrol-1-yl]-3,5-dihydroxyheptanoic acid calcium salt, belongs to a group of drugs called 3-hydroxy-3-methylglutaryl-coenzyme A (HMG CoA) reductase inhibitors, or “statins”. Atorvastatin is used together with diet to lower blood levels of “bad” cholesterol (low-density lipoprotein, or LDL), to increase levels of “good” cholesterol (high-density lipoprotein, or HDL), and to lower triglycerides (a type of fat in the blood). Atorvastatin is used to treat high cholesterol and to lower the risk of stroke, heart attack, or other heart complications in people with type 2 diabetes, coronary heart disease, or other risk factors [1,2,3]. An intensive search to develop, create, and improve a new, faster, simpler, and less toxic, i.e., “greener”, analytical method for its quantification is needed. Atorvastatin is a naturally highly hydrophobic molecule, requesting the use of high percentages of hydrophobic organic solvents in the mobile phase for reversed-phase chromatographic analysis, which increases the harmfulness, toxicity, environmental hazard, and costs of quantitative analysis. Creating a method with a possible simultaneous usage for the quantification of atorvastatin as an active pharmaceutical ingredient (API) and its related compounds in tablets and raw materials, with a single sample preparation and chromatographic run, in the shortest possible time with lower mobile phase consumption, was our main target and concept. There are a few high-performance liquid chromatography (HPLC) analytical methods for simultaneous determination of atorvastatin with other active substances [4,5,6,7,8,9,10,11,12,13], for quantification of atorvastatin alone, or together with its impurities [14,15,16,17,18,19,20,21]. Also, there is one method reported for the simultaneous determination of atorvastatin and antihypertensive, antidiabetic, and antithrombotic drugs, with HPLC [22]. The performance of this method described allows its use in the quantification of atorvastatin along with the nine most commonly prescribed drugs available in the market as atorvastatin-combined dosage forms.
As a continuation of our previous efforts [21], the aim of this study was to check the applicability of a modern solid phase particle (SPP)-based 2.2 µm column in the development of a new simple, economical, and faster HPLC method for the determination of atorvastatin and its impurities, using less toxic and more UV-transparent components in the mobile phase composition. The present study describes a new method intended for routine use in quality control laboratories, using less sophisticated equipment at a low cost.

The official and most commonly used method for the determination of impurities of atorvastatin is the method for related substances testing prescribed by the European Pharmacopoeia monograph for atorvastatin calcium. The monograph of atorvastatin from European Pharmacopoeia (EP) prescribes the HPLC method for impurities testing of atorvastatin active substance under the following conditions: octylsilyl C8 (L7) column with dimensions 250 mm × 4.6 mm and 5 µm particles (recommended Zorbax C8 Rx), combined isocratic and linear gradient mode of elution, with mobile phase composed of acetonitrile, tetrahydrofuran, and ammonium acetate buffer adjusted to pH 5.0 with glacial acetic acid, at flow rate 1.5 mL/min, UV signal monitoring at 244 nm and a run time of 85–90 min. We performed the EP method. A chromatogram obtained by the use of this method is presented in Figure 1.
In spite of the pharmacopoeial method, there are also a few published HPLC analytical methods for the quantification of atorvastatin in combination with other active substance [4,5,6,7,8,9,10,11,12,13], or for the determination of atorvastatin alone, or together with its impurities [14,15,16,17,18,19,20,21], with UV detection. We found the articles published by Petkovska et al. [18] and Vakkum et al. [20] as the most applicative and useful for testing atorvastatin impurities. The method published by Petkovska et al. [18] prescribes the use of a short high efficiency column, Zorbax Eclipse XDB C18 Rapid Resolution HT 50 mm × 2.1 mm, 1.8 µm, mobile phase composed of an acetonitrile, tetrahydrofuran, and phosphate buffer with pH 3.5. Use of this method is limited only on UPLC systems with very low system dispersion, extra-column volume, because the prescribed state of the art column with 1.8 µm particles cannot be used with high dwell volume or high dispersion standard HPLC systems with lower performance characteristics. Additionally, these columns are very powerful and more complicated for less skilled analysts, with a higher probability of column clogging. This method uses tetrahydrofuran as a part of the mobile phase, which we intended to avoid because of its toxicity and instability. The method published by Vakkum et al. [20] prescribes the use of simple gradient elution with 0.1% v/v trifluoroacteic acid and acetonitrile, and column Zorbax Bonus RP. Very interesting and attractive separations were achieved. The achieved resolution between critical pairs was even 2, even though EP requires a minimum of 1.5. However, these high resolutions were achieved with peaks of impurities present at low concentrations, at their detection limits. At these low concentrations, the peaks are always narrow and easier to separate. The low pH value of the 0.1% v/v trifluoroacetic acid used as a part of the mobile phase is also critical, usually little less than 2, which is out of the recommended pH range between 2 and 9 for the used column, Zorbax Bonus RP. This will shorten the column life and use.

A new simple, cost-effective, rapid, reproducible, and sensitive method for the determination of atorvastatin and its impurities was developed, through a different systematic approach of mobile phase composition, successfully applied on a properly selected adequate chromatographic column Shim-Pack XR-ODS II 75 mm × 3 mm, 2.2 µm. This method is significantly “greener” than most of the published chromatographic methods and the pharmacopoeial methods for the determination of the impurities of atorvastatin. A very important advantage of the developed method is that during one single run, simultaneous determination of the quantity of atorvastatin and its impurities can be performed. The low injection volume of not more than 2 µl offers the needed sensitivity for quantification of impurities present in low quantities, and still offers almost perfect peak symmetry not only of small peaks of impurities, but also of the peak of atorvastatin, enabling their simultaneous quantification. This was accomplished with appropriate mobile phase composition, and the use of a chromatographic silica column with a high quality bonded phase matrix. It successfully separates all the specified and detected unspecified impurities of atorvastatin, achieving all the needed system suitability requirements during an almost six times shorter run time than the pharmacopoeial method. 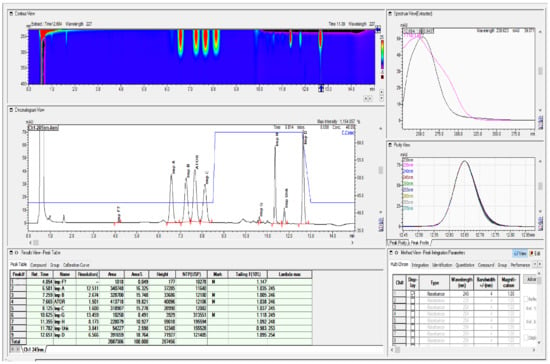 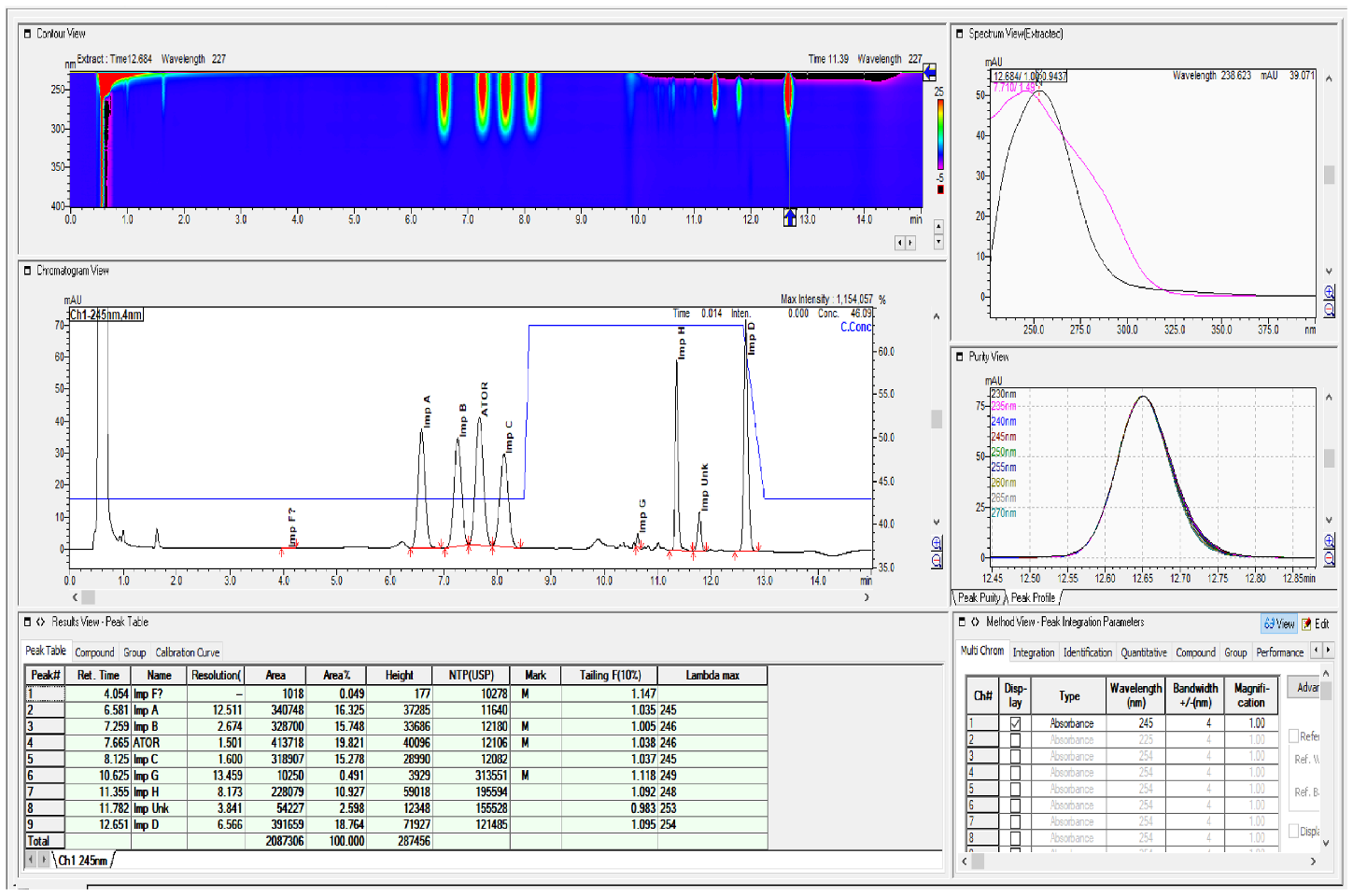 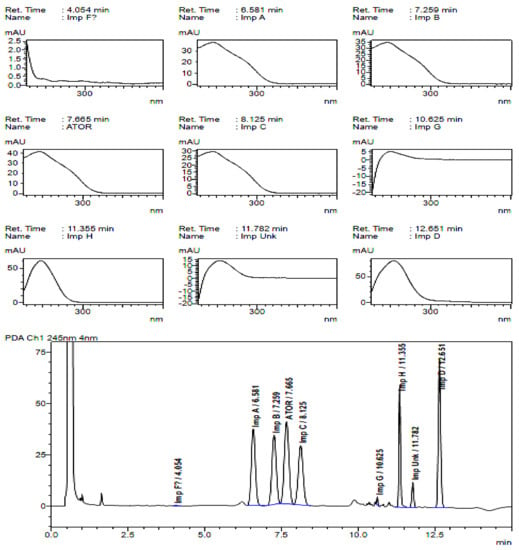 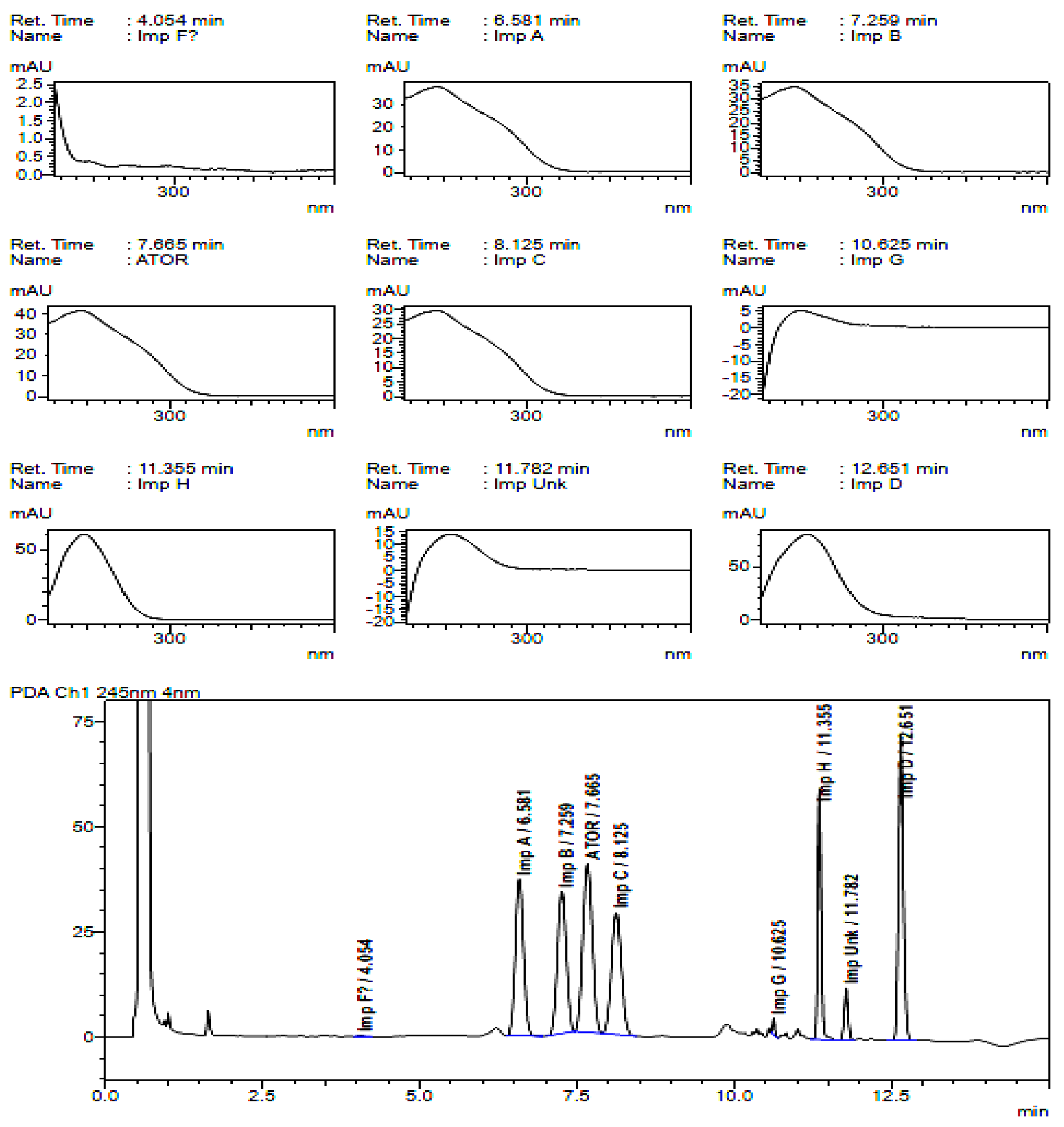 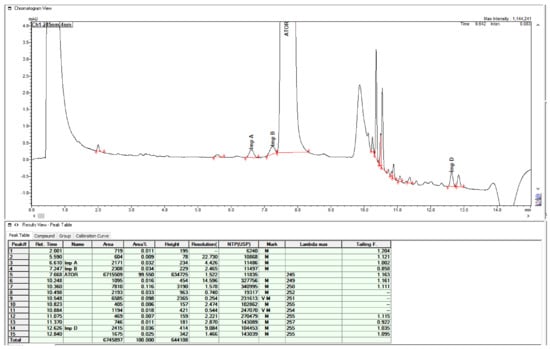 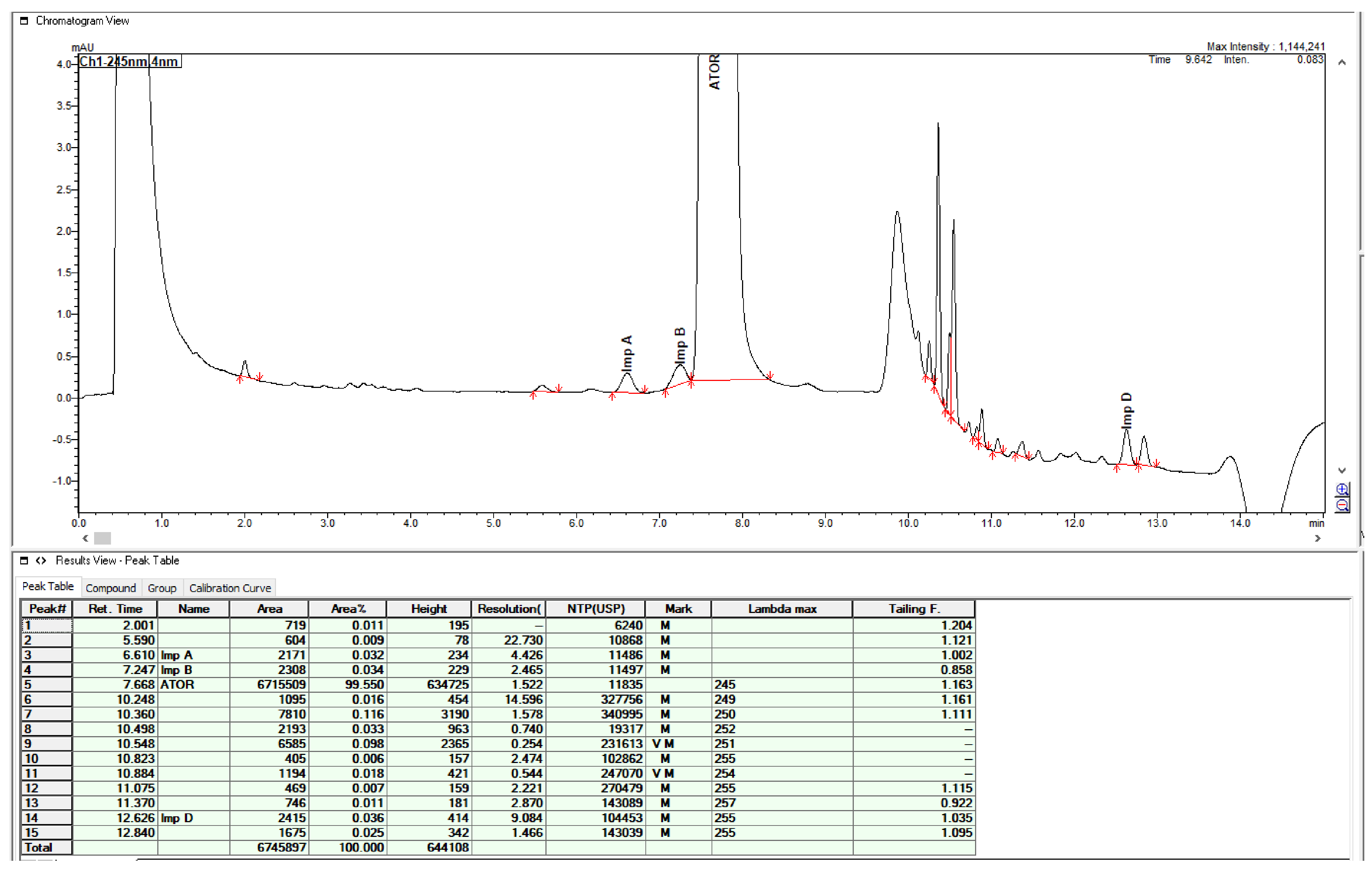 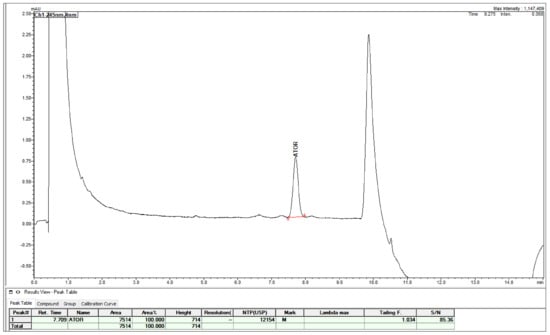 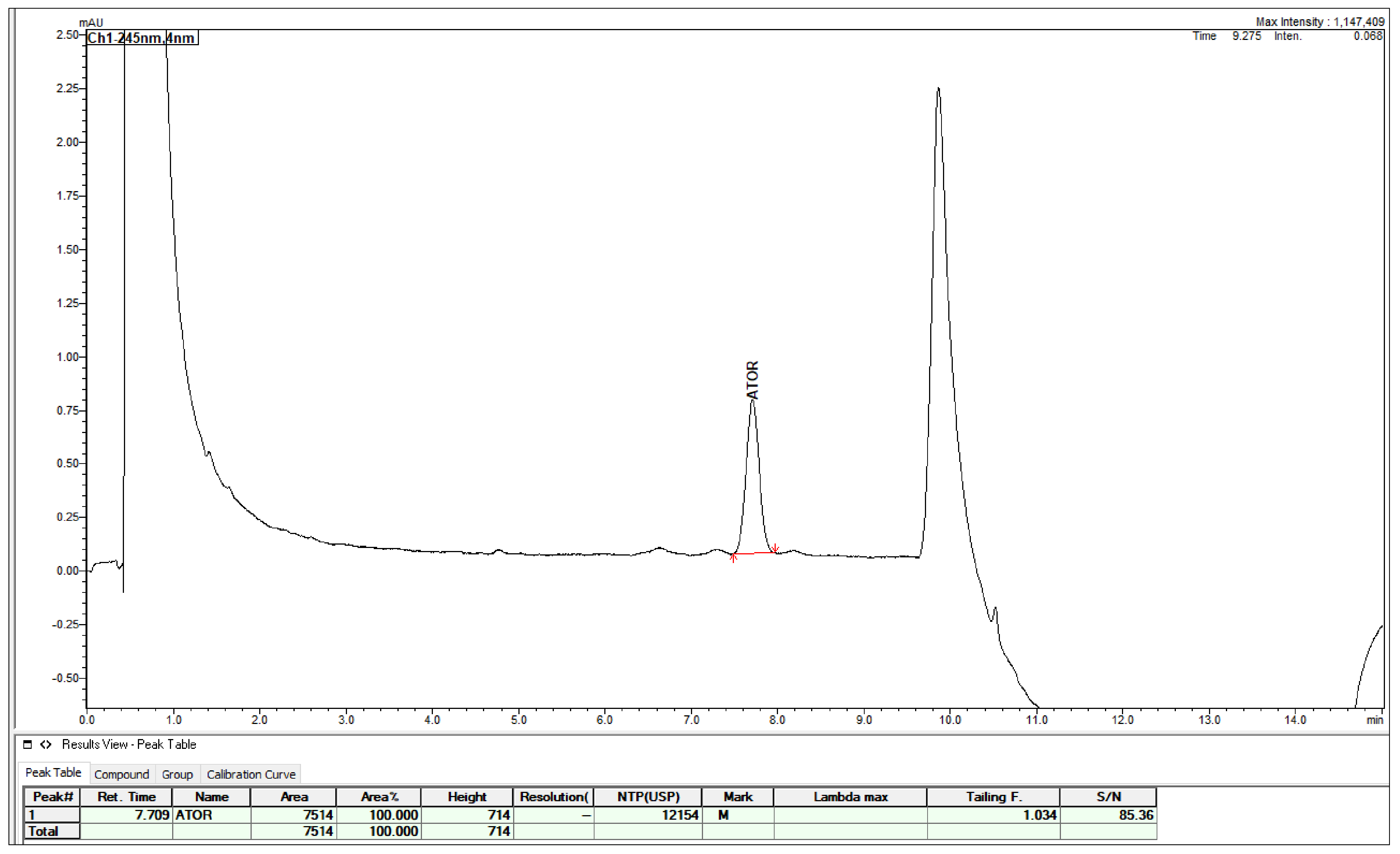 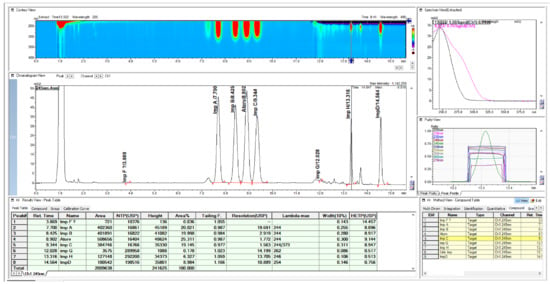 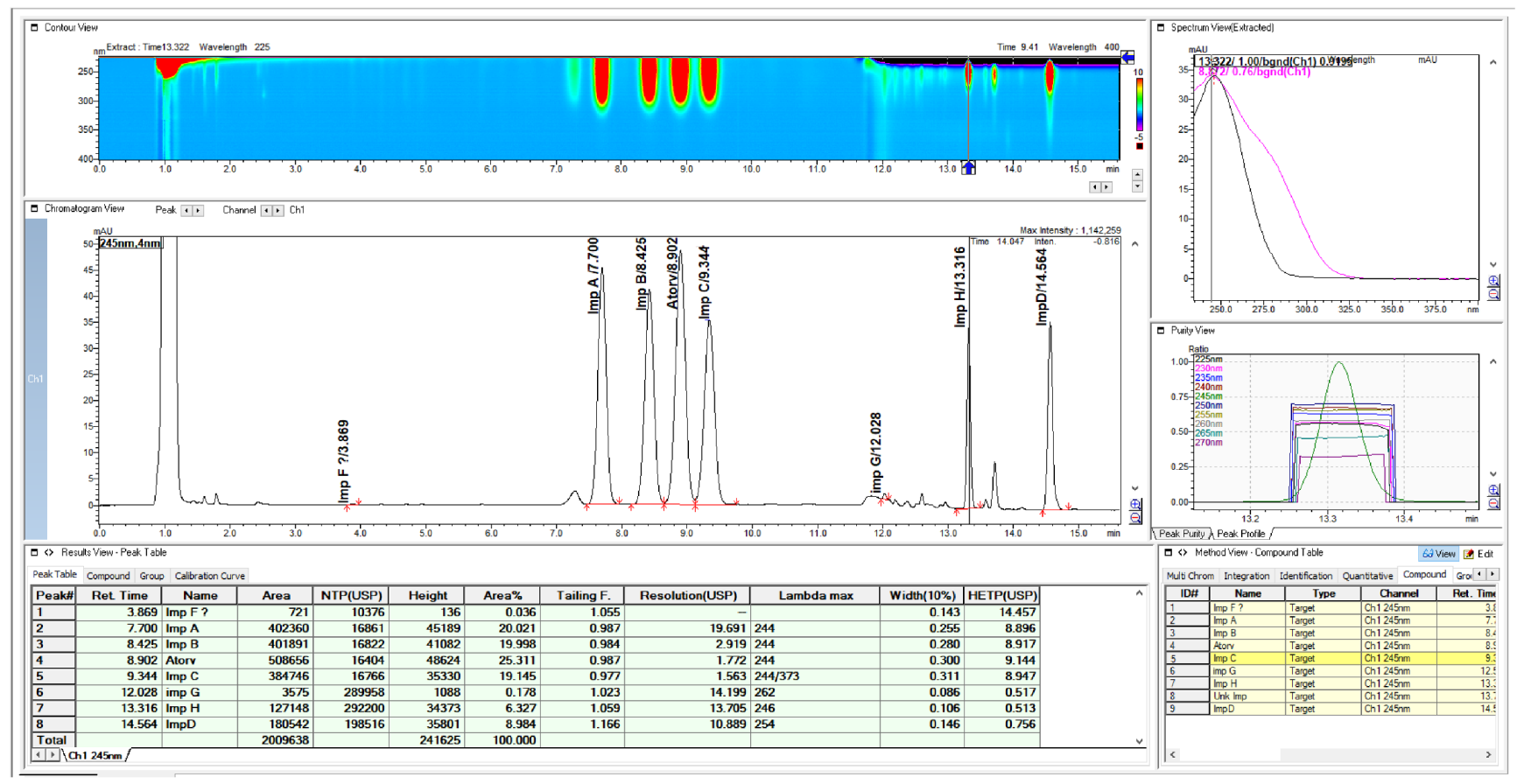