Submit to Atoms Review for Atoms 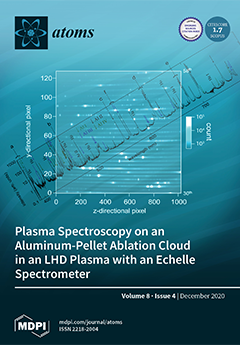 Cover Story (view full-size image): Spectroscopic studies of emission from an ablation cloud of a pellet injected into a high-temperature plasma may offer information about not only atomic data and the possibility of new light sources but also the ablation mechanism and atomic processes therein, and transport in the main plasma. In this work, we developed an echelle spectrometer to perform a whole-visible-range single-shot measurement with high resolution and observed the emission spectrum of an aluminum ablation cloud generated in a large helical device (LHD). More than 50 emission lines were identified as Al I, Al II, Al III, and Al IV lines. We estimated the electron temperature and density of the ablation cloud from the line intensity distribution and Stark broadening, respectively, and newly determined the Stark broadening coefficients of many Al II and III lines from the observed Stark widths. View this paper
Previous Issue
Volume 8, September
Next Issue
Volume 9, March
We use cookies on our website to ensure you get the best experience. Read more about our cookies here.
Accept
We have just recently launched a new version of our website. Help us to further improve by taking part in this short 5 minute survey here. here.
Never show this again