Stark-Broadening of Ar K-Shell Lines: A Comparison between Molecular Dynamics Simulations and MERL Results
Next Article in Special Issue

We present relativistic ab initio calculations of fundamental parameters for atomic selenium, based on the Multiconfiguration Dirac-Fock method. In detail, fluorescence yields and subshell linewidths, both of K shell, as well as K to K intensity ratio are provided, showing overall agreement with previous theoretical calculations and experimental values. Relative intensities were evaluated assuming the same ionization cross-section for the K-shell hole states, leading to a statistical distribution of these initial states. A method for estimating theoretical linewidths of X-ray lines, where the lines are composed by a multiplet of fine-structure levels that are spread in energy, is proposed. This method provides results that are closer to K experimental width values than the usual method, although slightly higher discrepancies occur for the K lines. This indicates some inaccuracies in the calculation of Auger rates that have a higher contribution for partial linewidths of the subshells involved in the K profile. Apart from this, the calculated value of K to K intensity ratio, which is less sensitive to Auger rates issues, is in excellent agreement with recommended values.
Keywords: X-rays; atomic fundamental parameters; selenium; fluorescence yields; high-accuracy spectra simulation X-rays; atomic fundamental parameters; selenium; fluorescence yields; high-accuracy spectra simulation

The need of data related to the interactions of light with matter is important in the development of research tools in several fields, such as fundamental physics [1], spectroscopy [2], plasma physics [3], and astrophysics [4]. Atomic calculations constitute an important source of information that partially fulfill this need.
Within this framework, the x-ray emission spectrum has long been a subject of interest, not only because it provides information about the atomic structure through the analysis of the characteristic radiation as, for instance, transition energies, but also because the peaks asymmetry reflects the existence of complex atomic processes beyond a simple bound-bound transition. Nowadays, the atomic structure is adequately explained through the relativistic quantum theory of the atom, whereas profile analysis is a test bed of atomic models.
Among the various atomic systems, inner-shell, multiple open-shell systems, and systems with highly excited states, are the most difficult to handle due to technical issues like the growth of needed computation time, convergence failure, and the existence of multiple near-degenerate eigenstates. Selenium is an example of such systems.
Experimental K-shell fluorescence yields for several atoms, among which Se is included, have been published by several authors. A compilation of the latest results can be found in Kahoul et al. [5]. In what concerns theoretical results, one still relies on the works of Kostroun et al. [6], and Walters and Bhalla [7]. KK intensity ratios have been very recently compiled by Daoudi et al., and although there are a substantial number of experimental data, the theoretical results are scarce.
In the last decade, with the fast development of computational power, emission spectra of open shell systems such as Se, Ti, and Cu could be investigated theoretically. A good way of testing the quality of the calculations is by comparing a synthesized emission spectra with high resolution x-ray data from crystal spectrometers. This has been done by the group of Chantler et al. for Ti [8,9], Cu [10], and V, Sc, Cr, and Mn [9] and by other collaborations bridging together theory and experiment [11,12,13,14,15]. These high resolution spectra might soon be used to update the SRD 128 database [16] run by the National Institute for Standards and Technology, by providing transferable x-ray standards, traceable to the S.I. units, that can be used by the x-ray community to perform high-accuracy calibrations of their systems [17]. Among these recent works are the measurements with a Double-Crystal-Spectrometer (DCS) of Cu [18], Mo [19], and the new microcalorimeter results for the lanthanide metals [20].
In this paper, we report some fundamental parameters related to the x-ray spectra of the selenium isolated atom calculated using the MCDFGME code, developed by Desclaux and Indelicato [21,22], which implements the Multiconfiguration Dirac-Fock code (MCDF) method.

In the context of the MCDF method, an atomic state is characterized by the electronic configuration A, the total angular momentum J, the total magnetic quantum number M, and all other quantum numbers necessary to fully characterize that state. In the absence of external fields, the energies of these states are degenerate in the total magnetic moment, that is, there are states with identical energies. The set of these degenerate states is called an atomic level, which will then be characterized by . The MCDFGME code developed by Desclaux and Indelicato [23,24] allows for the calculation of the level energies as well as radiative , and radiationless transition rates between levels i and f. From these quantities one can obtain the other atomic fundamental parameters.
The fluorescence yield of an one-hole atomic configuration A is defined as the probability that a vacancy in the ith subshell is filled through a radiative transition where the sum in i is over all the initial levels belonging to the configuration A and the sum in f is over all allowed final atomic levels. The quantity takes into account the degeneracy of the initial level.

Level energies and transition probabilities, both radiative and radiationless, were obtained using the multiconfiguration Dirac–Fock method, fully implemented in the general relativistic MCDFGME code developed by Desclaux and Indelicato [23,24].
We will give here a brief description of the MCDF method. For a detailed description we refer the reader to Refs. [23,25,26,27]. The relativistic Hamiltonian is taken in the form where is the one-electron Dirac Hamiltonian, and describes the sum of Coulomb repulsion and Breit interaction between the ath and the bth electron. Furthermore, the code also accounts for radiative corrections, namely, self-energy and vacuum polarization. For details on Quantum Electrodynamics (QED) corrections, we refer the reader to Ref. [28]. Nuclear size effects were taken into account by using a uniformly charged sphere, and the atomic masses and the nuclear radii were taken from the tables by Audi et al [29], and Angeli [30], respectively.
For the determination of the radiative transition probabilities we followed the formalism proposed by Löwdin [31] to treat the nonorthogonality effects, and consider independently the initial- and final-state wave functions obtained in the so-called optimized level scheme. The length gauge was used for all radiative transition probabilities.
For radiationless transitions, we assumed that the creation of the inner-shell hole is independent of the decay process. The continuum-electron wavefunctions are obtained by solving the Dirac-Fock equations with the same atomic potential of the initial state. To ensure orthogonality in these calculations, no orbital relaxation was allowed between the initial and final bound state wavefunctions.
The code was used in the single-configuration approach, with the Breit interaction and the vacuum polarization terms included in the self-consistent field process, and other QED effects included as perturbations.

In this work, we have performed simulations of the K and K diagram and satellites lines in Se using an ab initio technique where all of the relevant atomic fundamental parameters were computed with the MCDF method. The relative intensities of the diagram and satellite lines were computed assuming a statistical distribution of the initial levels upon ionization. Our results show a very good agreement of the K-shell fluorescence yields and K linewidths with other authors. For the K natural linewidth we find a 20–25% higher value than the recent result of Ito et al. [13]. The reasons for this increase are related to the difficulty in accurately calculating the Auger rates, which have a higher influence in the K lines than in their K counterparts. Natural widths for all of the studied lines were obtained either by summing all of the relevant level widths and also by fitting Lorentzian distributions to each of the unbroadened simulated lines, thus naturally taking into account the fine-structure broadening of the multiplets. KK intensity rates were also obtained using the same methods and we found good agreement with the most recent recommended values, especially with the new method of fitting the Lorentzian profiles to the unbroadened natural line shapes.

This research was funded in part by FCT (Portugal) under research center grants UID/FIS/04559/2020 (LIBPhys) and UID/MULTI/04046/2020 (BioISI). This work was also funded through the project PTDC/FIS-AQM/31969/2017, “Ultra-high-accuracy x-ray spectroscopy of transition metal oxides and rare earths.” J.M. and J.P.S acknowledge the support of EMPIR, under Contract No. 17FUN02MetroMMC. The EMPIR initiative is co-funded by the European Union’s Horizon 2020 research and innovation programme and the EMPIR participating States.

The authors kindly thank professor Yokiashi Ito for providing the raw experimental spectra that were analyzed in this work. 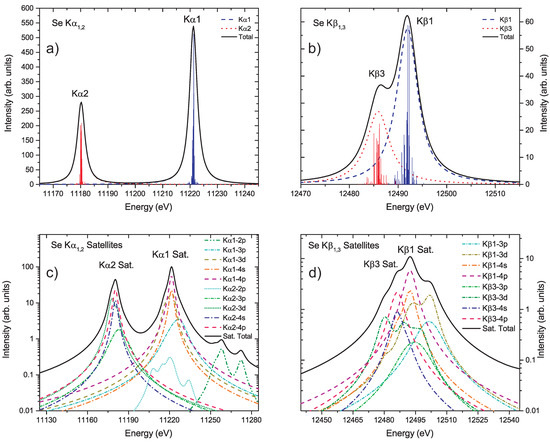 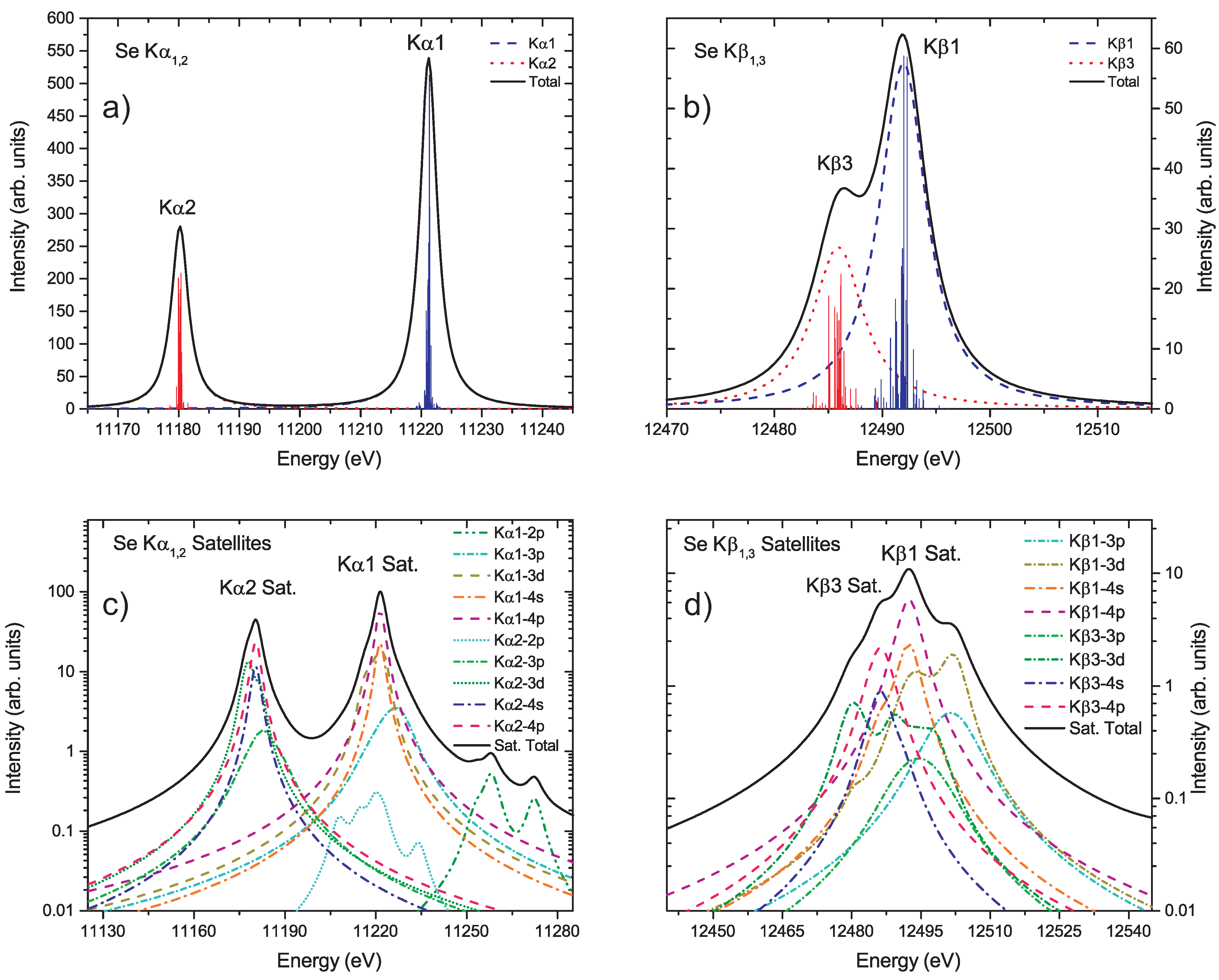 Table 3. KK intensity ratios.
Table 3. KK intensity ratios.
© 2021 by the authors. Licensee MDPI, Basel, Switzerland. This article is an open access article distributed under the terms and conditions of the Creative Commons Attribution (CC BY) license (http://creativecommons.org/licenses/by/4.0/).
We use cookies on our website to ensure you get the best experience. Read more about our cookies here.
Accept
We have just recently launched a new version of our website. Help us to further improve by taking part in this short 5 minute survey here. here.
Never show this again