Methylation is an essential biochemical mechanism that is central to the transmission of life, and crucially responsible for regulating gametogenesis and continued embryo development. The methylation of DNA and histones drives cell division and regulation of gene expression through epigenesis and imprinting. Brain development and its maturation also depend on correct lipid methylation, and continued neuronal function depends on biogenic amines that require methylation for their synthesis. All methylation processes are carried out via a methyltransferase enzyme and its unique co-factor S-adenosylmethionine (SAM); the transfer of a methyl group to a target molecule results in the release of SAH (SA homocysteine), and then homocysteine (Hcy). Both of these molecules are toxic, inhibiting methylation in a variety of ways, and Hcy recycling to methionine is imperative; this is achieved via the one carbon cycle, supported by the folates cycle. Folate deficiency causes hyperhomocysteinaemia, with several associated diseases; during early pregnancy, deficiency interferes with closure of the neural tube at the fourth week of gestation, and nutraceutical supplementation has been routinely prescribed to prevent neural tube defects, mainly involving B vitamins, Zn and folates. The two metabolic pathways are subject to single nucleotide polymorphisms that alter their activity/capacity, often severely, impairing specific physiological functions including fertility, brain and cardiac function. The impact of three types of nutraceutical supplements, folic acid (FA), folinic acid (FLA) and 5 Methyl THF (MTHF), will be discussed here, with their positive effects alongside potentially hazardous secondary effects. The issue surrounding FA and its association with UMFA (unmetabolized folic acid) syndrome is now a matter of concern, as UMFA is currently found in the umbilical cord of the fetus, and even in infants’ blood. We will discuss its putative role in influencing the acquisition of epigenetic marks in the germline, acquired during embryogenesis, as well as the role of FA in the management of cancerous disease. View Full-Text
Keywords: methylation; folic acid; folinic acid; 5MTHF; UMFA; fertility; cancer; epigenesis methylation; folic acid; folinic acid; 5MTHF; UMFA; fertility; cancer; epigenesis
►▼ Show Figures 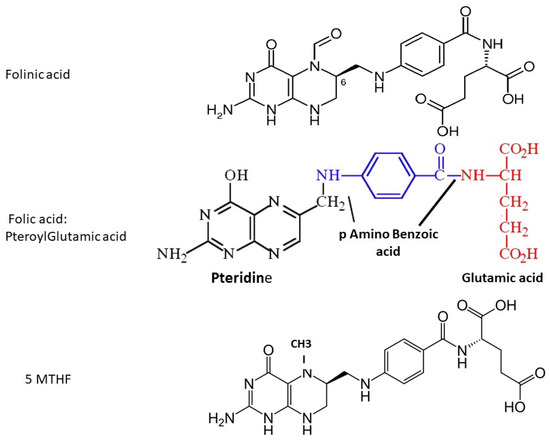