An Examination of People’s Privacy Concerns, Perceptions of Social Benefits, and Acceptance of COVID-19 Mitigation Measures That Harness Location Information: A Comparative Study of the U.S. and South Korea
Previous Article in Special Issue

Registration is essential for terrestrial LiDAR (light detection and ranging) scanning point clouds. The registration of indoor point clouds is especially challenging due to the occlusion and self-similarity of indoor structures. This paper proposes a 4 degrees of freedom (4DOF) coarse registration method that fully takes advantage of the knowledge that the equipment is levelled or the inclination compensated for by a tilt sensor in data acquisition. The method decomposes the 4DOF registration problem into two parts: (1) horizontal alignment using ortho-projected images and (2) vertical alignment. The ortho-projected images are generated using points between the floor and ceiling, and the horizontal alignment is achieved by the matching of the source and target ortho-projected images using the 2D line features detected from them. The vertical alignment is achieved by making the height of the floor and ceiling in the source and target points equivalent. Two datasets, one with five stations and the other with 20 stations, were used to evaluate the performance of the proposed method. The experimental results showed that the proposed method achieved 80% and 63% successful registration rates (SRRs) in a simple scene and a challenging scene, respectively. The SRR in the simple scene is only lower than that of the keypoint-based four-point congruent set (K4PCS) method. The SRR in the challenging scene is better than all five comparison methods. Even though the proposed method still has some limitations, the proposed method provides an alternative to solve the indoor point cloud registration problem.
Keywords: indoor point clouds; registration; 4DOF; line matching indoor point clouds; registration; 4DOF; line matching

Two datasets were used to validate the proposed method. The first one, provided by ETH Zurich (https://ethz.ch/content/dam/ethz/special-interest/baug/igp/photogrammetry-remote-sensing-dam/documents/sourcecode-and-datasets/PascalTheiler/office.zip) and abbreviated as SR, contains five scans of an indoor office (Figure 1a). All five scans overlap each other, and thus a total of 10 pairs of matching can be conducted (Table 1). The ground truth transformations between pairs are provided by ETH Zurich. The second one, provided by Wuhan RGSpace Technology Co. LTD (http://rgspace.com/) and abbreviated as CB, contains 20 scans of the interior of a building (Figure 1b). The point clouds were captured by a self-integrated scanner using three Azure Kinect DKs (https://azure.microsoft.com/en-us/services/kinect-dk/). The Azure Kinect DKs were operated in a WFOV (wide field-of-view) 2 × 2 binned mode in data acquisition and thus the scanning range was less than 2.9 m. The scanner was leveled using tilt sensors with a 0.1 degree precision and rotated around z axis with a pre-calibrated fixed angle interval (30 degrees) in data acquisition. The relative relationships between the Azure Kinect DK sensors were also carefully calibrated, and thus all the data scanned in a station can be transformed to a unified coordinate system. A total of 19 pairs of matching was conducted to ensure that all the 20 scans could be registered to the points of the first scan station. The ground truth transformations between pairs were provided by Wuhan RGSpace Technology Co. LTD. The pairs used to conduct experiments and other details can be found in Table 1.

Vertical plane points such as walls and doors are used to generate ortho-projected images. To get vertical plane points, the ground points and ceiling points are first eliminated from the raw indoor point clouds. It is obvious that the ground and ceiling have the most points in the height histogram, as illustrated in Figure 3, so we can find the height of the ground and ceiling using the height histogram and eliminate the points with values smaller than the ground height and points with values higher than the ceiling height.
Since the equipment is mounted above the floor and the coordinate origin of the sensor is on the equipment, the z values of the floor points are certainly smaller than zero and the z values of ceiling points are certainly larger than zero. The height of the floor points can be found by fitting under the zero part of a height histogram using extreme value distribution. Accordingly, the height of ceiling points can be found by fitting above the zero part of the height histogram using extreme value distribution. The probability density function used in this paper is defined as Equation (6). In Equation (6), is the location of the maximum value and is a scale parameter.
After the heights of the floor (denoted as ) and ceiling (denoted as ) are found, to eliminate moving objects only points with z values between and are used to generate ortho-projected images. In this paper, and are used to avoid moving objects on the floor and hanging objects on the ceiling.
Before registration, the source and target points are all in the scanner-owned coordinate system. To generate ortho-projected images of a station point cloud (source points or target points), the minimum and values (denoted as ) of that station point cloud are found. For a point , its row number and column number in the ortho-projected image are obtained by Equations (7) and (8). is the grid resolution of the ortho-projected images. Theoretically, the smaller the , the better the matching accuracy but the higher the computing complexity. To compromise between accuracy and computing complexity, is empirically set to 0.01 m in this paper. If a pixel in an ortho-projected image contains at least one point, its pixel value is set to 255. Otherwise, the pixel value is set to 0. In such a way, we can obtain a binary ortho-projected image for the source points and target points.

When the point clouds that need to be registered are scanned in a closed room, the generated ortho-projected image may be a square or rectangle. In such situation, the matching between the source ortho-projected image and the target ortho-projected image may result in a wrong matching result. As illustrated in Figure 13a,b, the proposed method cannot distinguish these two situations and may lead to a wrong matching result. Fortunately, the indoor scenes often have doors and static objects (as illustrated in Figure 13c), and these doors and static objects can help us to avoid such ambiguity. The successful registration of dataset SR proved that the proposed method can successfully deal with such situations.
For point pairs with one scanned inside a room and one outside the room (for example, S11 and S12 in dataset CB), the registration may fail due to it being hard to find enough corresponding lines in the source and target ortho-projected images. Besides this, some pairs of point clouds scanned in large rooms may only exist one corresponding line due to the limited scanning distance of the used equipment, as illustrated in Figure 14a,b. The failed pairs of S4-S5, S8-S9, S10-S11, S11-S14, S14-S15, and S17-S18 belong to this case. 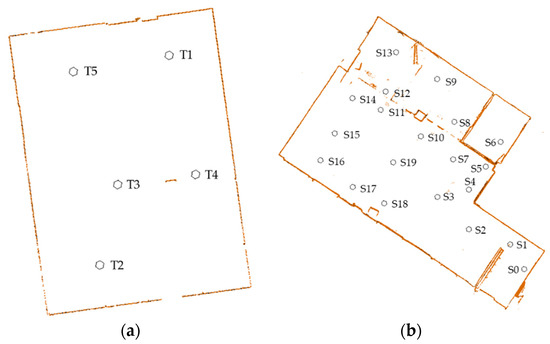 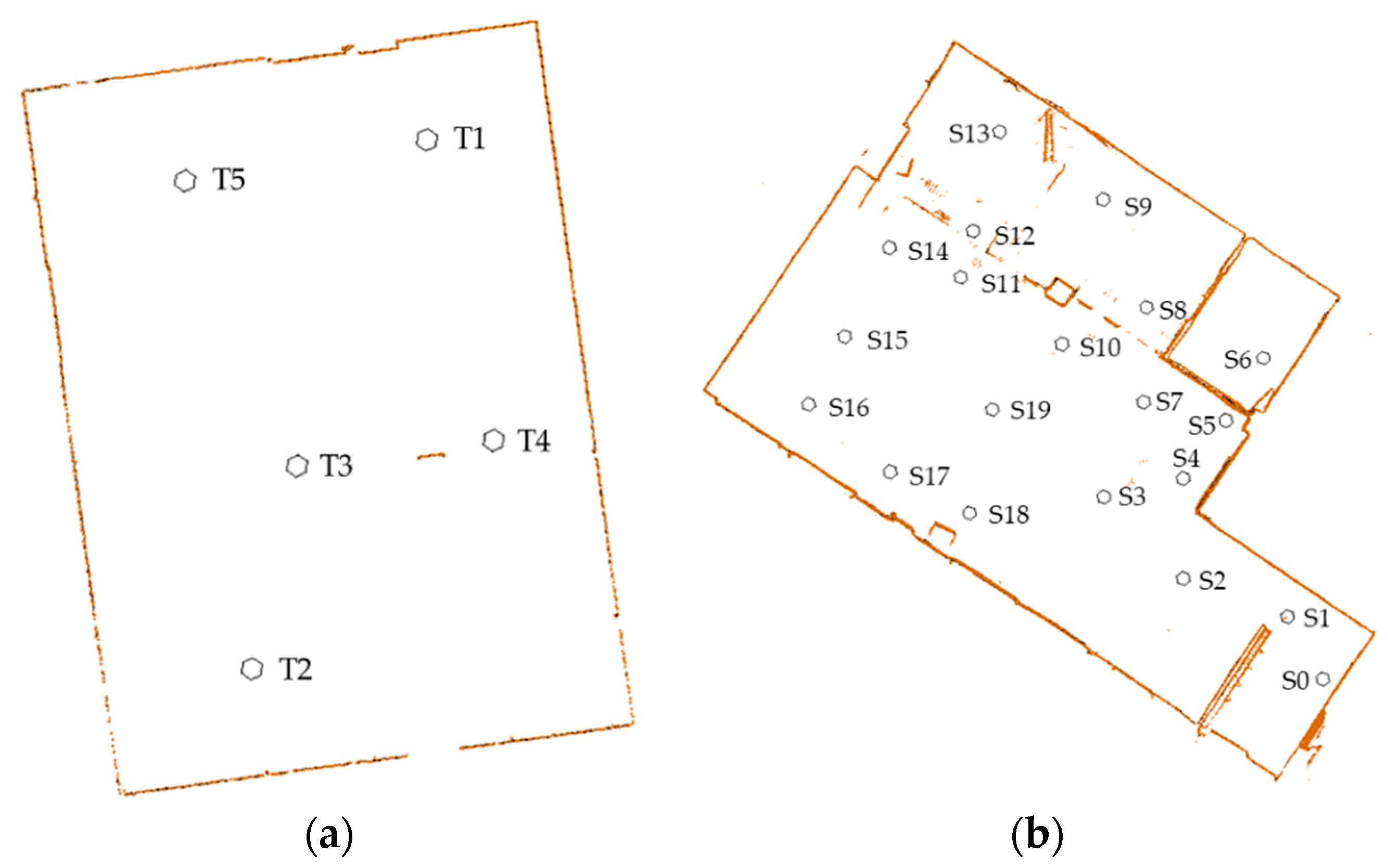 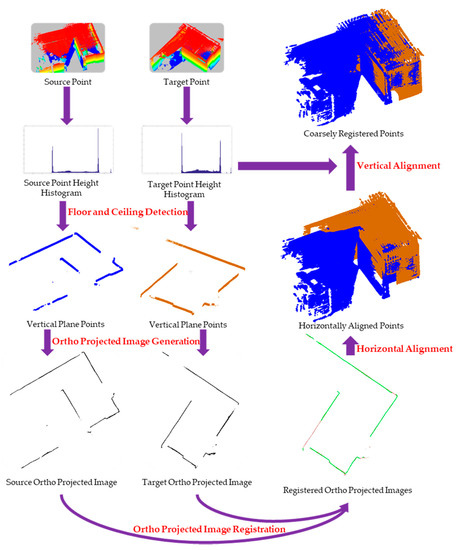 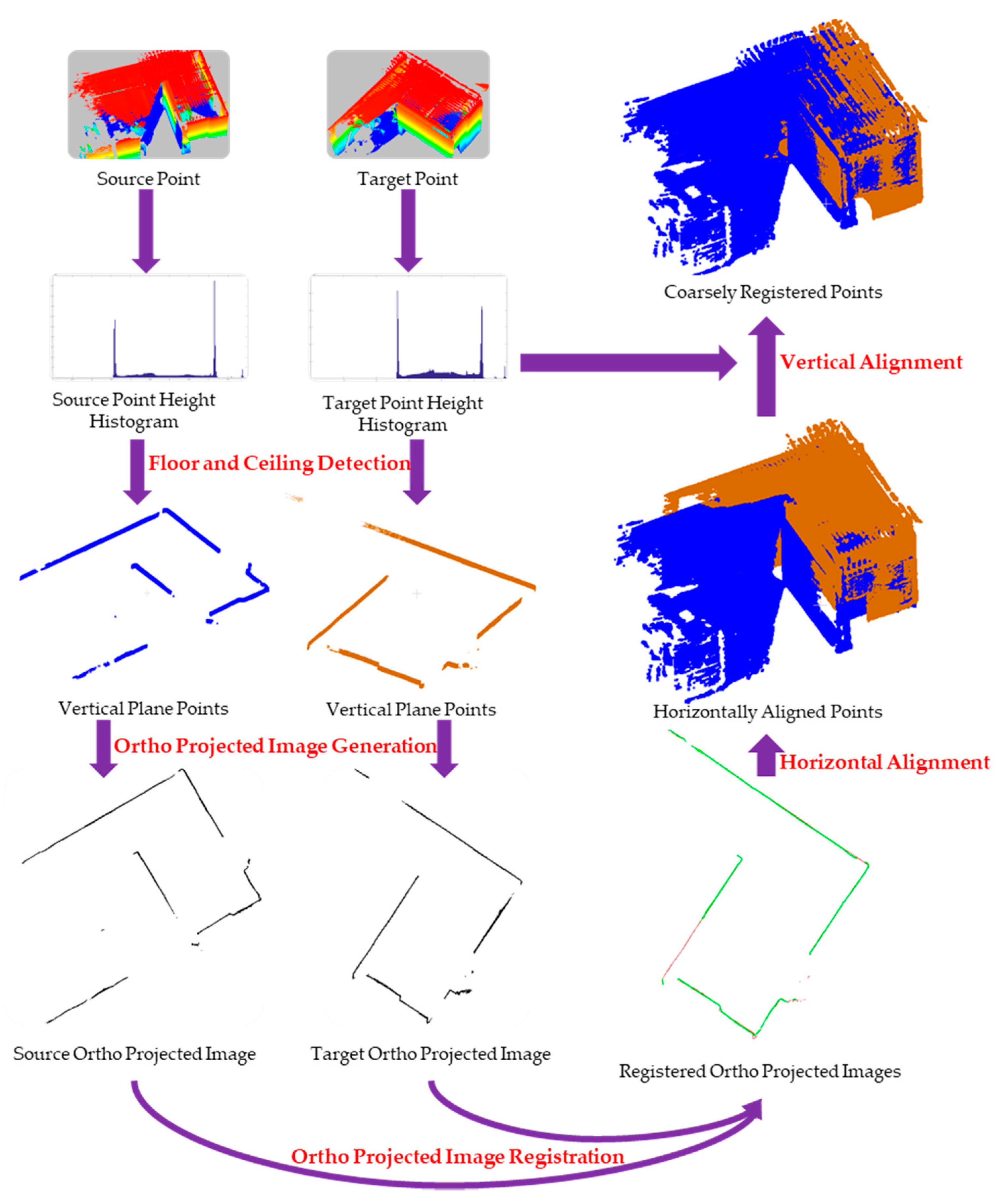 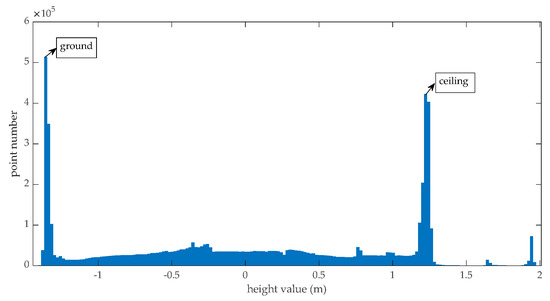 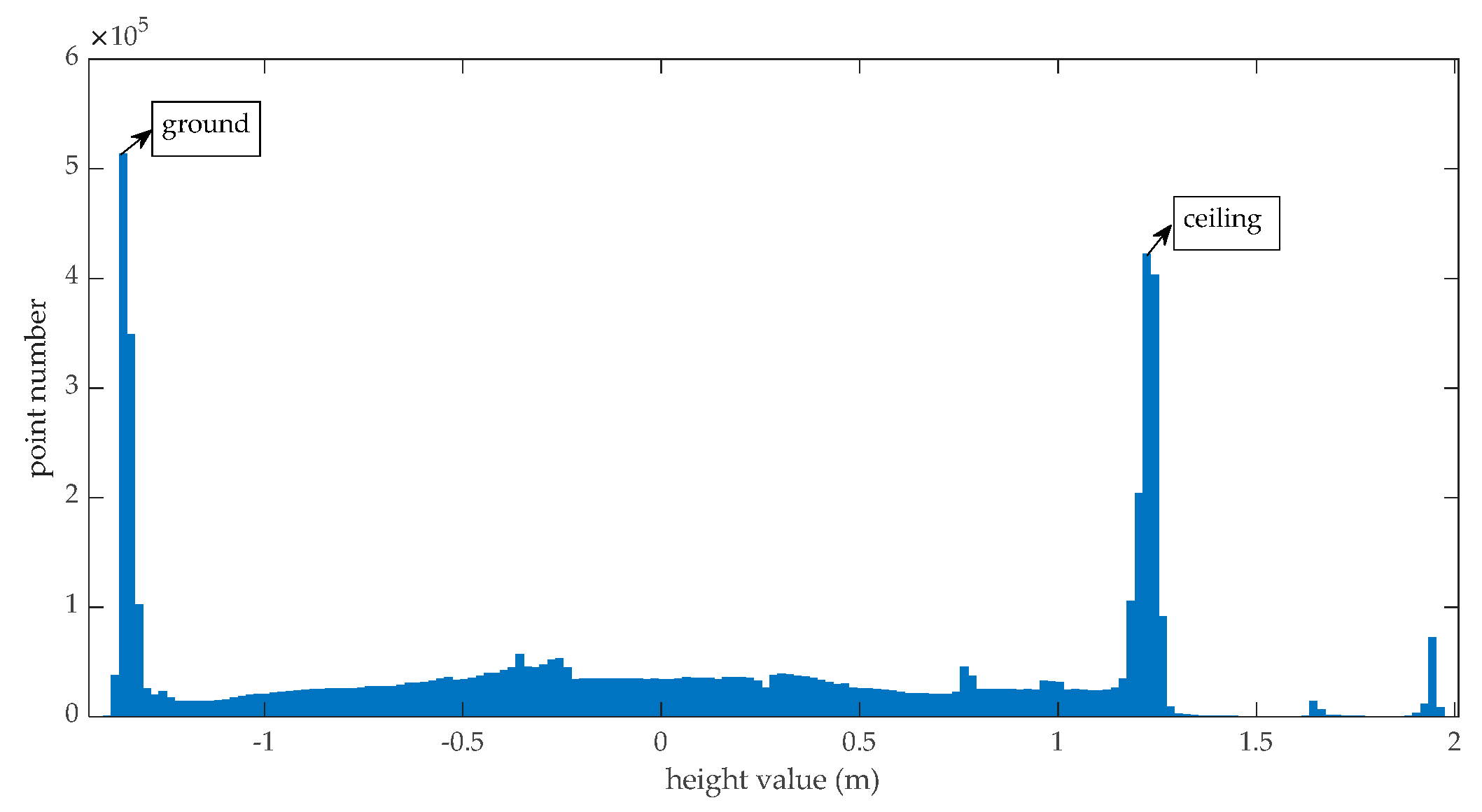 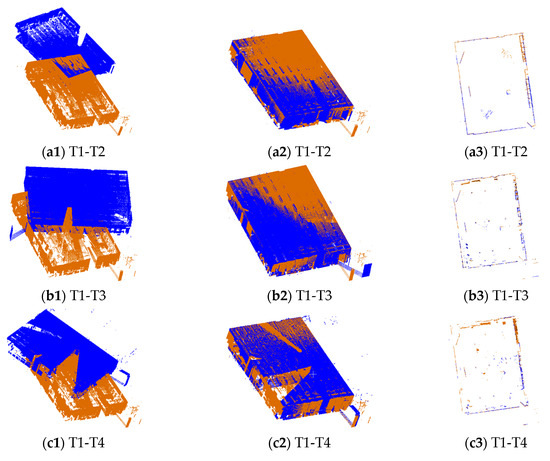 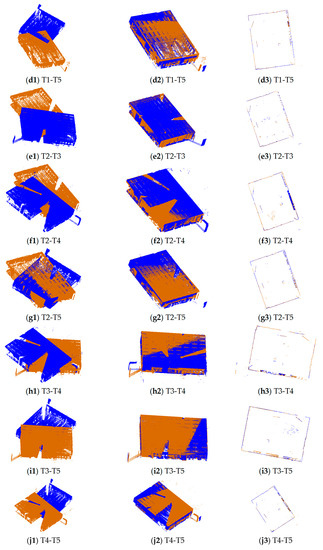 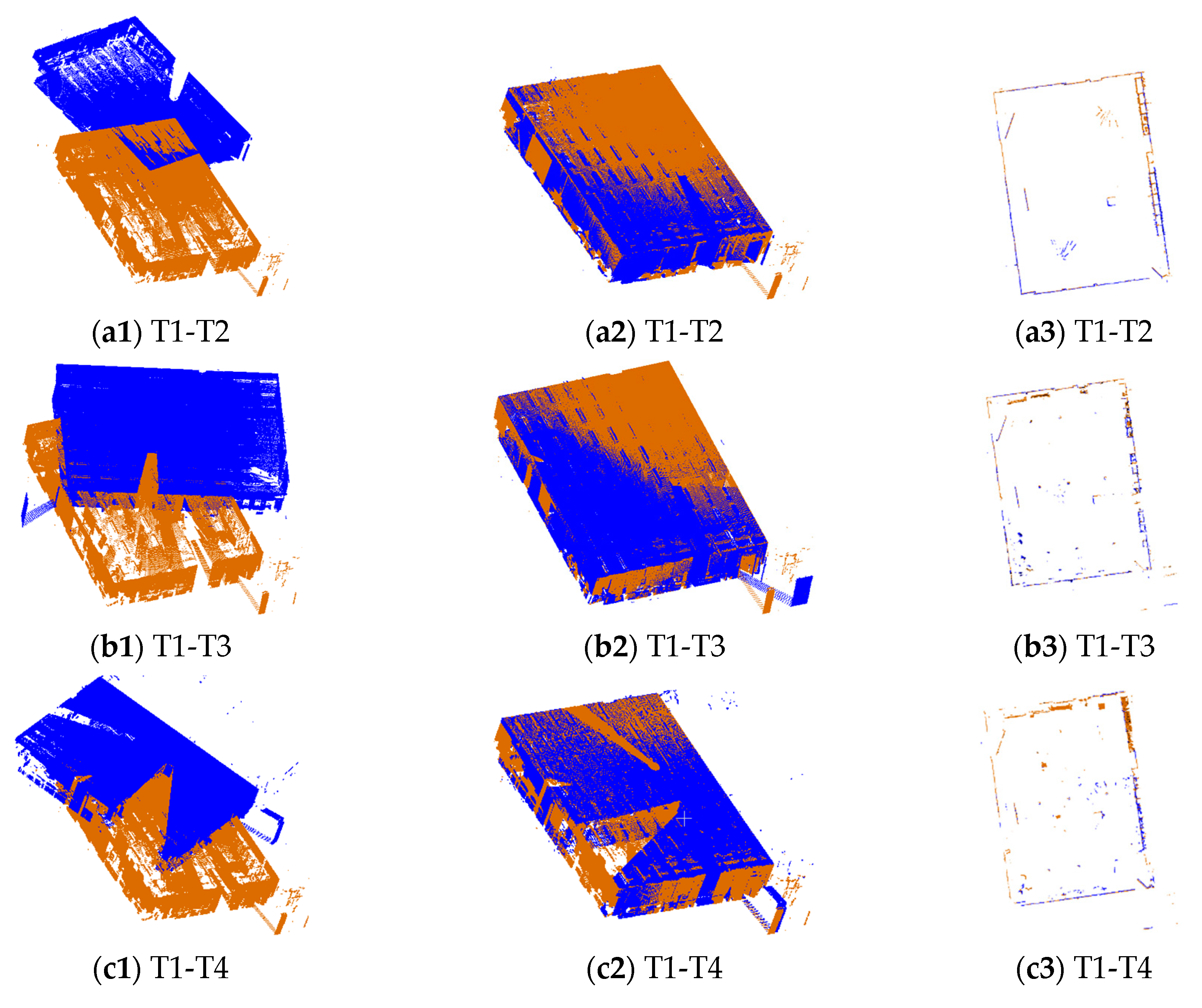 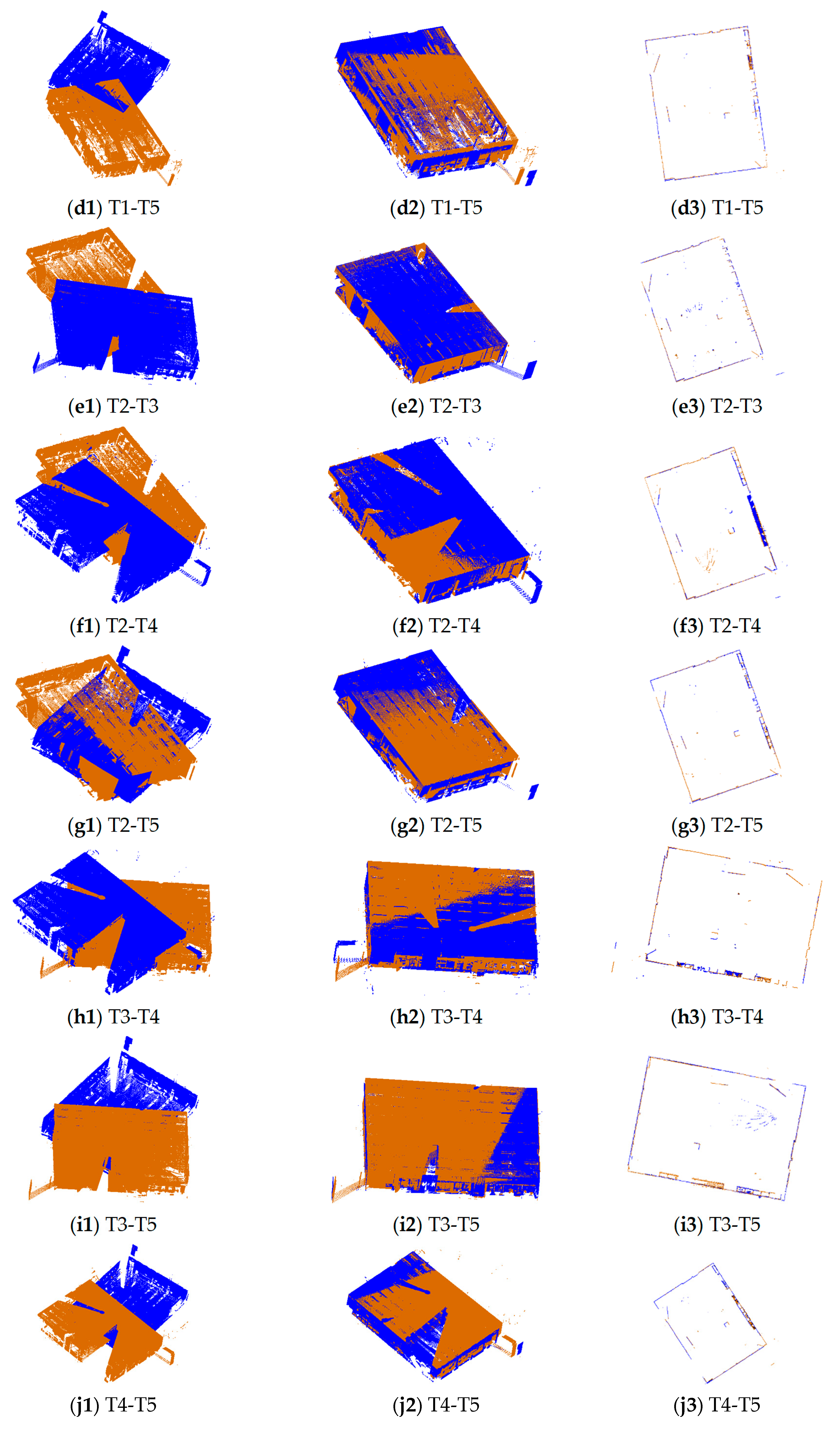 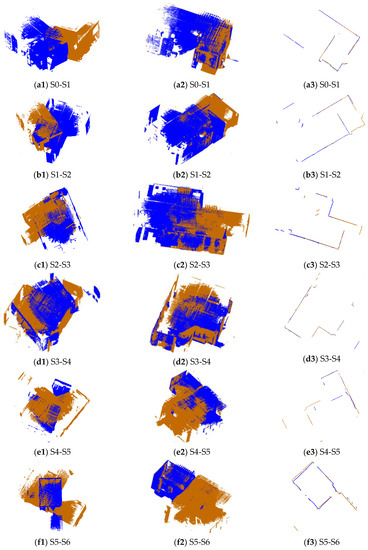 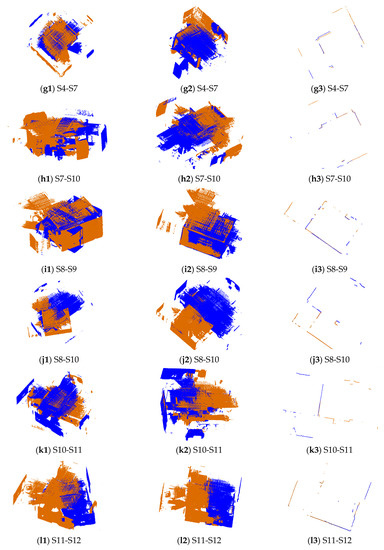 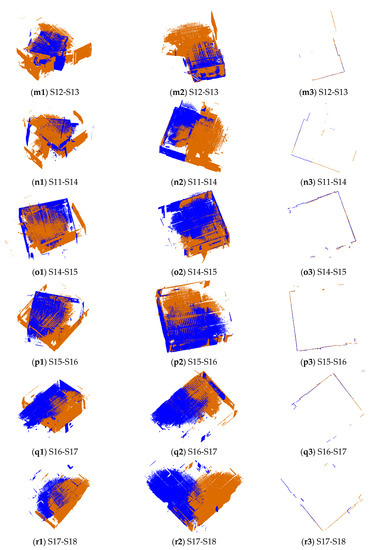 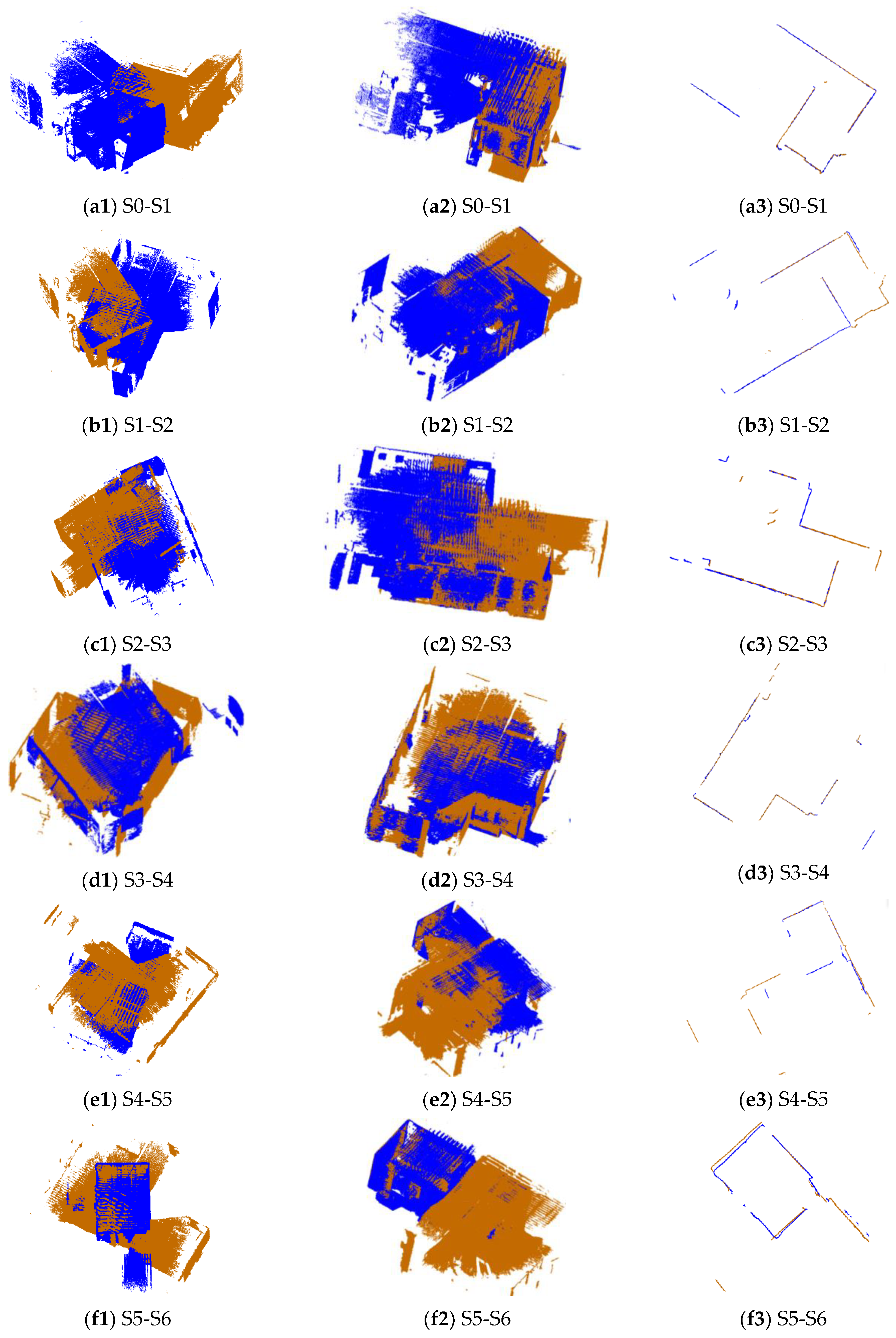 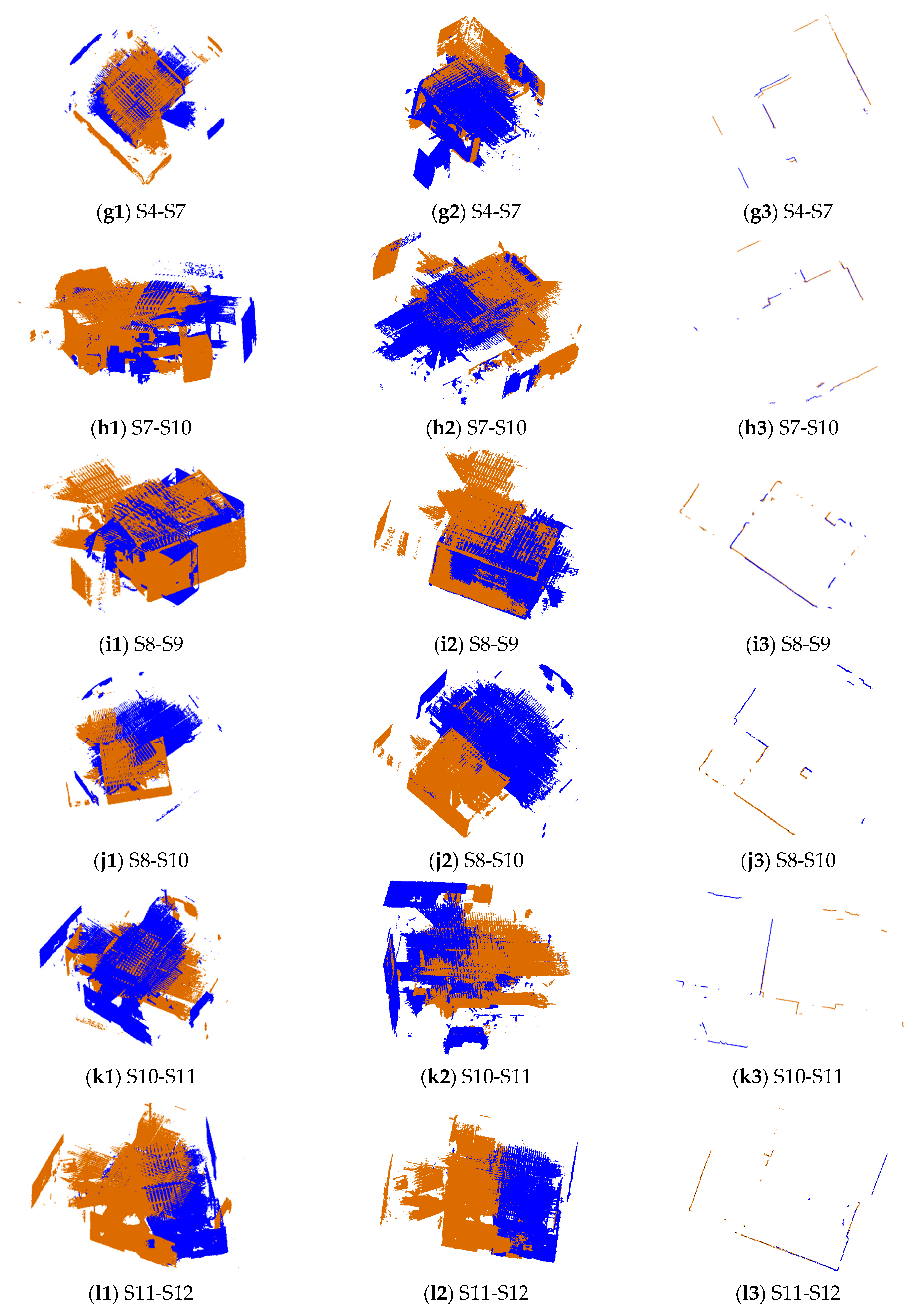 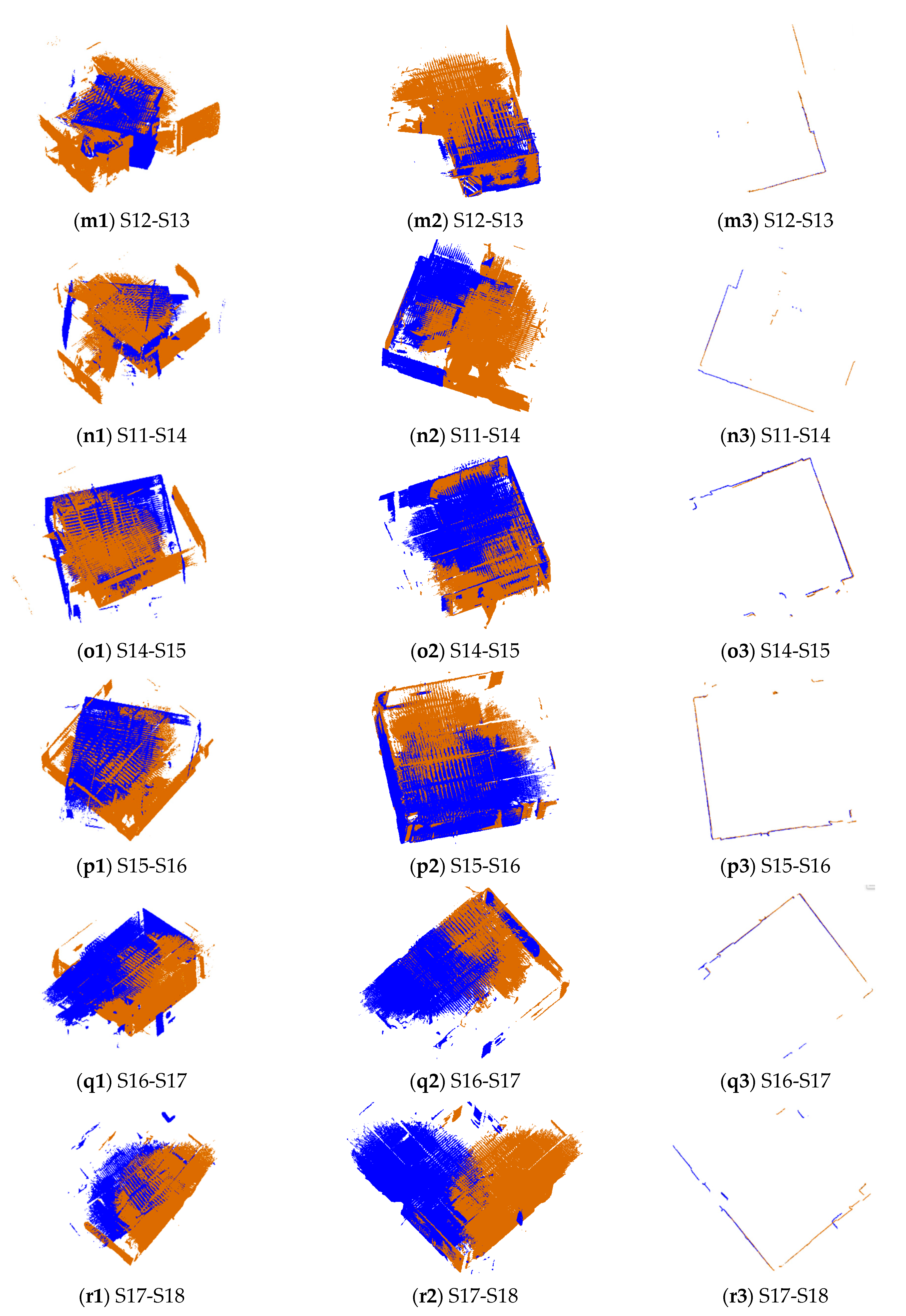 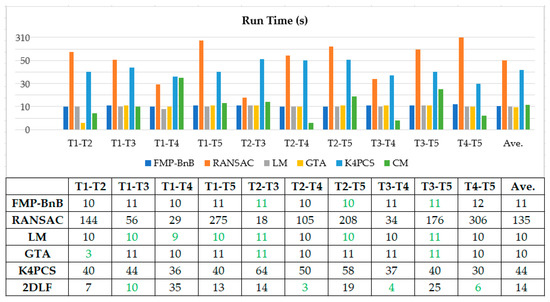 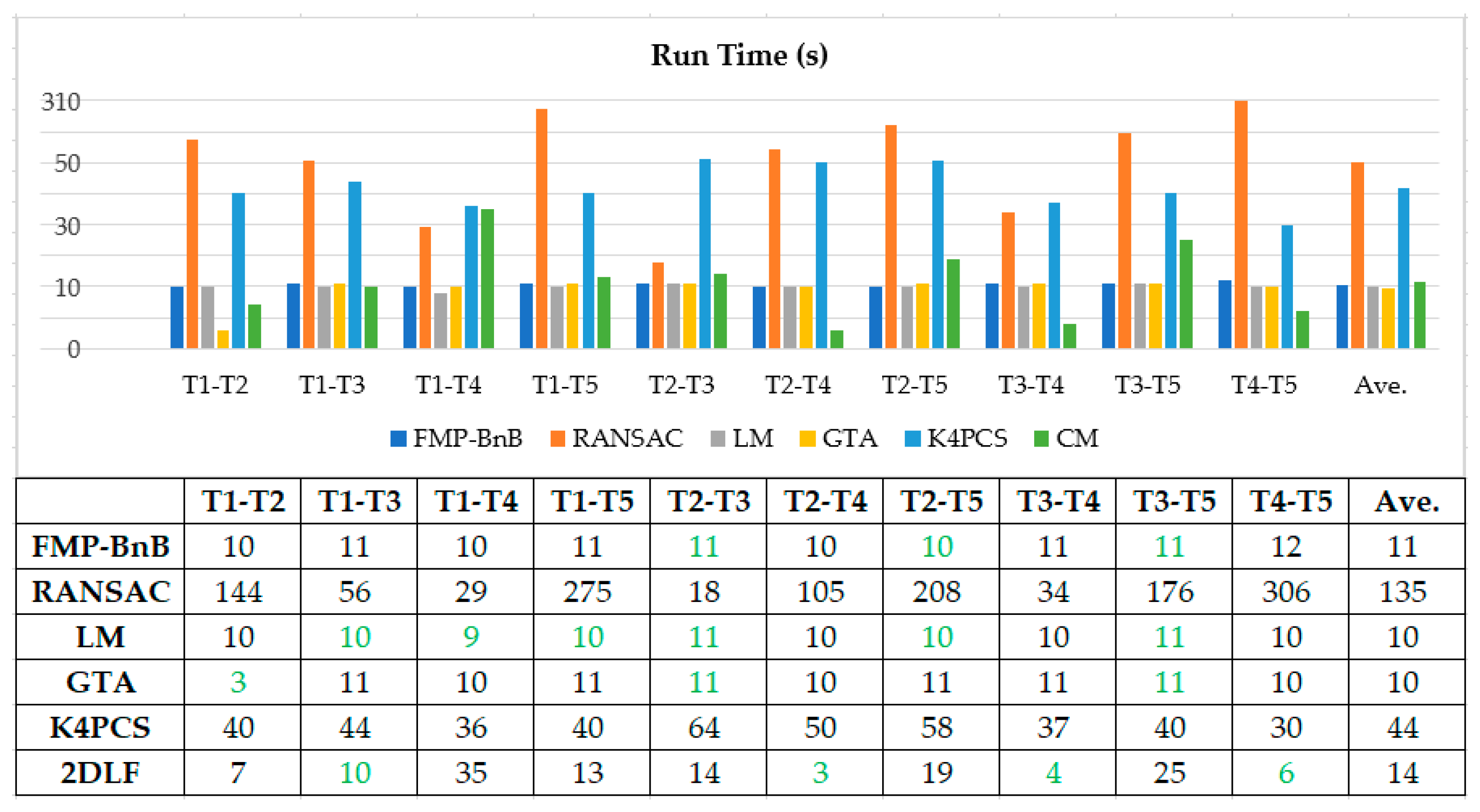 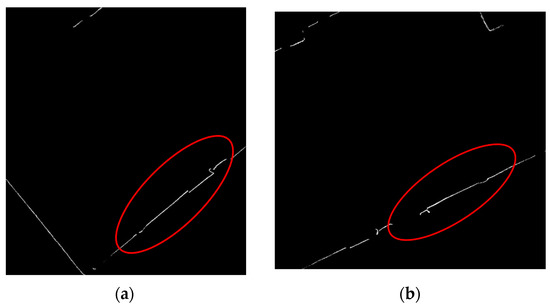 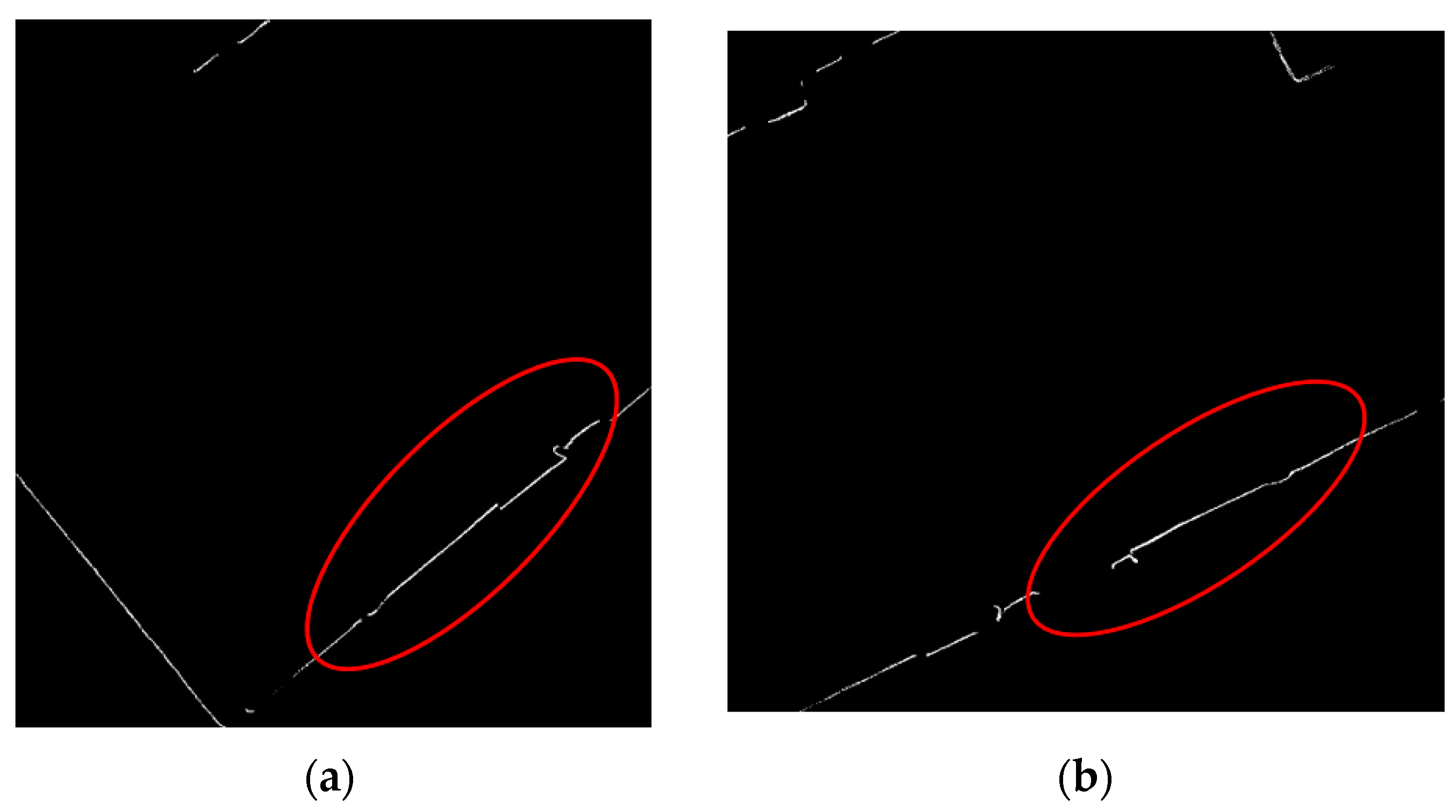 Table 1. Summary of the experimental datasets.
Table 1. Summary of the experimental datasets.
© 2021 by the authors. Licensee MDPI, Basel, Switzerland. This article is an open access article distributed under the terms and conditions of the Creative Commons Attribution (CC BY) license (http://creativecommons.org/licenses/by/4.0/).
We use cookies on our website to ensure you get the best experience. Read more about our cookies here.
Accept
We have just recently launched a new version of our website. Help us to further improve by taking part in this short 5 minute survey here. here.
Never show this again