Vegetation is vital, and its greening depends on access to water. Thus, precipitation has a considerable influence on the health and condition of vegetation and its amount and timing depend on the climatic zone. Therefore, it is extremely important to monitor the state of vegetation according to the movements of precipitation in climatic zones. Although a lot of research has been conducted, most of it has not paid much attention to climatic zones in the study of plant health and precipitation. Thus, this paper aims to study the plant health in five African climatic zones. The linear regression model, the persistence index (PI), and the Pearson correlation coefficients were applied for the third generation Normalized Difference Vegetation Index (NDVI3g), with Climate Hazard Group infrared precipitation and Climate Change Initiative Land Cover for 34 years (1982 to 2015). This involves identifying plants in danger of extinction or in dramatic decline and the relationship between vegetation and rainfall by climate zone. The forest type classified as tree cover, broadleaved, deciduous, closed to open (>15%) has been degraded to 74% of its initial total area. The results also revealed that, during the study period, the vegetation of the tropical, polar, and warm temperate zones showed a higher rate of strong improvement. Although arid and boreal zones show a low rate of strong improvement, they are those that experience a low percentage of strong degradation. The continental vegetation is drastically decreasing, especially forests, and in areas with low vegetation, compared to more vegetated areas, there is more emphasis on the conservation of existing plants. The variability in precipitation is excessively hard to tolerate for more types of vegetation. View Full-Text
Keywords: vegetation change; climate zone; rainfall variability; Africa; NDVI3g; persistence index; endangered plants types; Climate Change Initiative Land Cover vegetation change; climate zone; rainfall variability; Africa; NDVI3g; persistence index; endangered plants types; Climate Change Initiative Land Cover
►▼ Show Figures 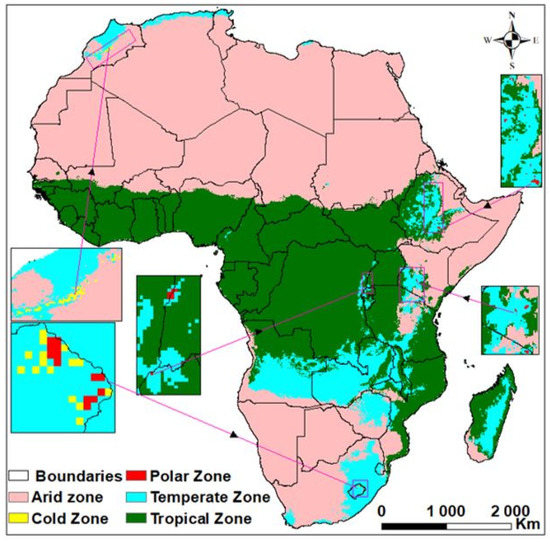