Austria aims to meet 100% of its electricity demand from domestic renewable sources by 2030 which means, that an additional 27 / of renewable electricity generation are required, thereof 11 / from photovoltaic. While some federal states and municipalities released a solar rooftop cadastre, there is lacking knowledge on the estimation of the potential of both, ground mounted installations and rooftop modules, on a national level with a high spatial resolution. As a first, in this work data on agricultural land-use is combined with highly resolved data on buildings on a national level. Our results show significant differences between urban and rural areas, as well as between the Alpine regions and the Prealpine- and Easter Plain areas. Rooftop potential concentrates in the big urban areas, but also in densely populated areas in Lower- and Upper Austria, Styria and the Rhine valley of Vorarlberg. The ground mounted photovoltaic potential is highest in Eastern Austria. This potential is geographically consistent with the demand and allows for a production close to the consumer. In theory, the goal of meeting 11 / in 2030 can be achieved solely with the rooftop PV potential. However, considering the necessary installation efforts, the associated costs of small and dispersed production units and finally the inherent uncertainty with respect to the willingness of tens of thousands of individual households to install PV systems, installing the necessary solar PV on buildings alone is constrained. View Full-Text
Keywords: photovoltaic; rooftop; ground mounted; potential; Austria photovoltaic; rooftop; ground mounted; potential; Austria
►▼ Show Figures 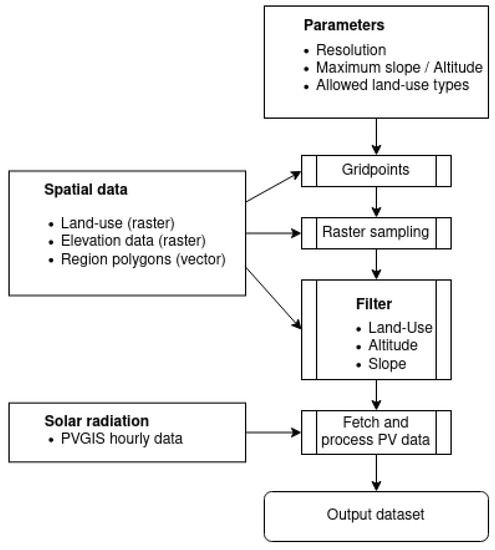