Recent advancements in spatial modelling and mapping methods have opened up new horizons for monitoring the migration of bird species, which have been altered due to the climate change. The rise of citizen science has also aided the spatiotemporal data collection with associated attributes. The biodiversity data from citizen observatories can be employed in machine learning algorithms for predicting suitable environmental conditions for species’ survival and their future migration behaviours. In this study, different environmental variables effective in birds’ migrations were analysed, and their habitat suitability was assessed for future understanding of their responses in different climate change scenarios. The Jacobin cuckoo (Clamator jacobinus) was selected as the subject species, since their arrival to India has been traditionally considered as a sign for the start of the Indian monsoon season. For suitability predictions in current and future scenarios, maximum entropy (Maxent) modelling was carried out with environmental variables and species occurrences observed in India and Africa. For modelling, the correlation test was performed on the environmental variables (bioclimatic, precipitation, minimum temperature, maximum temperature, precipitation, wind and elevation). The results showed that precipitation-related variables played a significant role in suitability, and through reclassified habitat suitability maps, it was observed that the suitable areas of India and Africa might decrease in future climatic scenarios (SSPs 2.6, 4.5, 7.0 and 8.5) of 2030 and 2050. In addition, the suitability and unsuitability areas were calculated (in km2) to observe the subtle changes in the ecosystem. Such climate change studies can support biodiversity research and improve the agricultural economy. View Full-Text
Keywords: citizen science; machine learning; Indian monsoon; Jacobin cuckoo; Maxent; species distribution model; habitat suitability; range expansion; WorldClim; CMIP citizen science; machine learning; Indian monsoon; Jacobin cuckoo; Maxent; species distribution model; habitat suitability; range expansion; WorldClim; CMIP
►▼ Show Figures 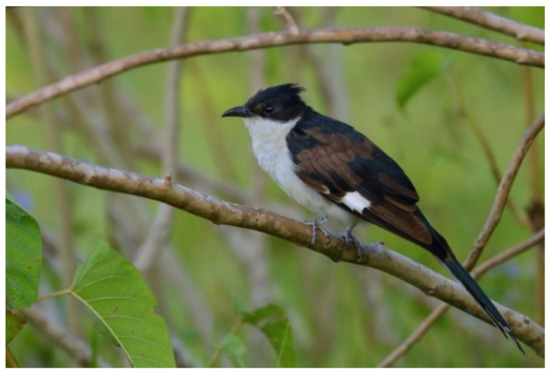