Understanding urban growth spatiotemporally is important for landscape and urban development planning. In this study, we examined the spatiotemporal pattern of urban growth of the Colombo Metropolitan Area (CMA)—Sri Lanka’s only metropolitan area—from 1992 to 2014 using remote sensing data and GIS techniques. First, we classified three land-use/cover maps of the CMA (i.e., for 1992, 2001, and 2014) using Landsat data. Second, we examined the temporal pattern of urban land changes (ULCs; i.e., land changes from non-built-up to built-up) across two time intervals (1992–2001 and 2001–2014). Third, we examined the spatial pattern of ULCs along the gradients of various driver variables (e.g., distance to roads) and by using spatial metrics. Finally, we predicted the future urban growth of the CMA (2014–2050). Our results revealed that the CMA’s built-up land has increased by 24,711 ha (221%) over the past 22 years (11,165 ha in 1992 to 35,876 ha in 2014), at a rate of 1123 ha per year. The analysis revealed that ULC was more intense or faster during the 2000s (1268 ha per year) than in the 1990s (914 ha per year), coinciding with the trends of population and economic growth. The results also revealed that most of the ULCs in both time intervals occurred in close proximity to roads and schools, while also showing some indications of landscape fragmentation and infill urban development patterns. The ULC modeling revealed that by 2030 and 2050, the CMA’s built-up land will increase to 42,500 ha and 56,000 ha, respectively. Most of these projected gains of built-up land will be along the transport corridors and in proximity to the growth nodes. These findings are important in the context of landscape and urban development planning for the CMA. Overall, this study provides valuable information on the landscape transformation of the CMA, also highlighting some important challenges facing its future sustainable urban development. View Full-Text
Keywords: Colombo Metropolitan Area; land-change intensity; gradient analysis; land-change modeling Colombo Metropolitan Area; land-change intensity; gradient analysis; land-change modeling
►▼ Show Figures 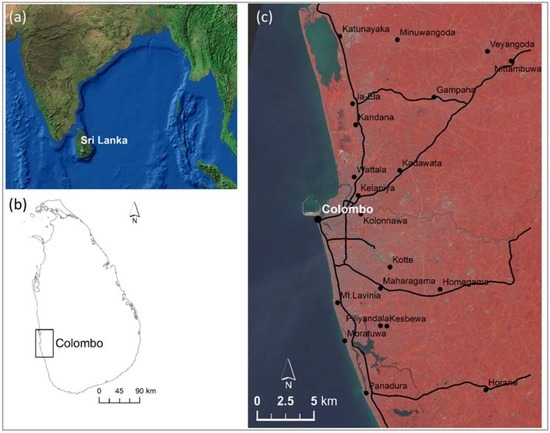