The focus of our study was China’s cropland, and these were delineated from GlobeLand30 [24,25] land use land cover (LULC) map produced in 2010. The data refers to 10 land cover types, namely cultivated land, forest, grassland, and others. We use cultivated land of GlobeLand30 as croplands masked from 2012 to 2015. The dataset can be found at the following link: http://www.globallandcover.com (last access date: 2 October 2016). The cropland mask was extracted by identifying cultivated land as one class and all nine other land cover types as a single non-cropland class. In Figure 1, the green regions denote cropland, and the white regions represent non-cropland areas.

Deep feedforward neural network (DFNN) was used because it is an established supervised tool that can produce a regression task to extract deep features among a large number of variables and enable high predictive accuracy. The H2O implementation of deep learning was used in this study, which is based on a DFNN that is trained with gradient descent using error back propagation. Readers can find the H2O R package 3.0 edition by using the following link: https://github.com/h2oai/h2o-3 (last access date: 22 December 2016).
We built deep learning-based models including one input layer with two types of explanatory variables (VIIRS TOA reflectance and brightness temperature), one response variable (in situ soil moisture), one output layer (estimated soil moisture), and multiple hidden layers. The procedure of model building, as shown in Figure 3, includes the following steps.
(1)  Tuning the model’s training parameters
The H2O deep learning model has more than 70 parameters [36]. To reduce the complexity of the H2O deep learning model, we adopted the recommended default values for the majority of model parameters, such as L1 = 0.2, L2 = 0.2, momentum_start = 0.5, input_dropout_ratio = 0.2, hidden_dropout_ratios = 0.5, and others, where L1, L2 and dropout are effective regularization techniques to prevent model overfitting. In addition, the default rectifier linear was used as the activation function. The H2O deep learning model enables the following constraining parameters: (1) the number of hidden layers; (2) the number of hidden units in each hidden layer, i.e., neurons; and (3) the number of iterations over the training samples, i.e., epochs. To address the optimal values, a grid search algorithm [37,38] was employed. For each model, the number of hidden layers started at 3 and ended at 11, neurons started at 100 and ended at 500, and epochs started at 1000 and ended at 3500. Then, after each iteration, the number of hidden layers, neurons and epochs would be increased by 1100 and 100, respectively. When the minimum MSE value and maximum are obtained, the optimal parameters are determined.
(2)  Model calibration using DFNN
By tuning hidden layers, neurons and epochs, three groups of models can be calibrated when the highest and lowest MSE value occurs. The output of the calibration includes the calibrated models (model category, weights, biases, statues of neuron layers, etc.), the estimated soil moisture, and the optimized training parameters (hidden layers, neurons and epochs).
(3)  Model validation using in situ soil moisture
The number of validating samples was approximately one tenth of total samples. All samples were independent of the training samples. To measure model variance and to further explore model performance, we performed residual analysis on estimated soil moisture and in situ soil moisture using residual scatter plots, residual frequency histograms, and residual cumulative percent plots. The residual scatter plots were employed to identify probable outliers under a conditional probability of 99.7%. Based on this confidence level, Jarque–Bera tests [39] were performed on the residual data to evaluate the normality of the models. Accompanied by residual frequency histograms and residual cumulative percent plots, the Jarque–Bera test uses the hypothesis that the data are normally distributed at the significance level of 0.3%. When the probability is lower than 0.003, the null hypothesis can be rejected and the data are normally distributed, and vice versa. Additionally, the Jarque–Bera test results can be used to determine whether the residual data have the skewness and kurtosis patterns that match those of a normal distribution.

The optimal versions of Model I (highlighted in Table 2) were validated using 1000 pairs of validation samples. As shown in Figure 4, the adjusted coefficients of determination were greater than 0.95, demonstrating that Model I was able to capture more than 95% of variability in measured soil moisture data. The model using 10 hidden layers was more stable compared to that using nine hidden layers for RMSE was reduced from 0.0282 to 0.0131. The optimal versions of Model II (highlighted in Table 3) were validated using 700 pairs of validation samples. The validation results were > 0.89 and RMSE < 0.03. While the adjusted coefficients of determination of the model validation results were lower than those of the model calibration results, one possible reason is that the relatively small sample size may have resulted in more instability for DFNN in the model calibration process. The optimal versions of Model III (highlighted in Table 4) were validated using 500 pairs of samples. Similar to Models I and II, the results demonstrated Model III could explain most of variability in measured soil moisture.
The models using eight hidden layers generated better results than those using more hidden layers. By comparing the three groups of models, we observed that deep neural hidden layers are not suitable for relatively small-scale datasets containing 5900 to 7300 samples. At the same time, the iterative operations in the model training of Model II and III were more computationally intensive than that of Model I. This is mainly because Models II and III have higher dimensions of input parameters than Model I. In addition, using Model III is better if the size of the training data are relatively small due to the multi-sensor remote sensing data. In contrast, we suggest using Model I to estimate soil moisture when the size of soil samples is relatively large with only visible remote sensing data.

This paper proposed a deep learning model-based method for upscaling in situ soil moisture using VIIRS RDR to address the challenging problem of surface soil moisture estimation at the national scale. Three groups of models were built using VIIRS SWIR, Visible/SWIR, and Visible/SWIR/TIR data. The results showed high accuracy with 0.8917 < < 0.9813 and 0.0118 < RMSE < 0.0294, thereby confirming the effectiveness of the deep learning model. The results also showed that models using eight hidden layers should be employed when the size of the training samples is relatively small and the dimension of the input variables is relatively large (multi-sensor). For the upscaling of the in situ soil moisture to the national scale, we suggest using a model with eight hidden layers, 500 neurons per hidden layer, and 3500 epochs per hidden layer. We observed that the effectiveness of these models depended on the model parameters and the size of the input training dataset. To make the models more operational, further work is necessary. Our approach produces surface soil moisture estimated for cropland in China that are more accurate than the SMAP radar soil moisture products and GLDAS 0–10 cm depth soil moisture products. However, the soil moisture map has data gaps due to clouds in image data. Still, the deep learning models provided a practical way to upscale the soil moisture to a national scale. We believe that they can be applied more comprehensively when more remote sensing sensors such as radar are involved.

Dongying Zhang designed the experiment and procedure. Wen Zhang analyzed the results and together they wrote the manuscript. The work was supervised by Lingkui Meng, who contributed to all stages of the work. Wei Huang made major contributions to the interpretations and modification. Zhiming Hong performed the model validation experiment. 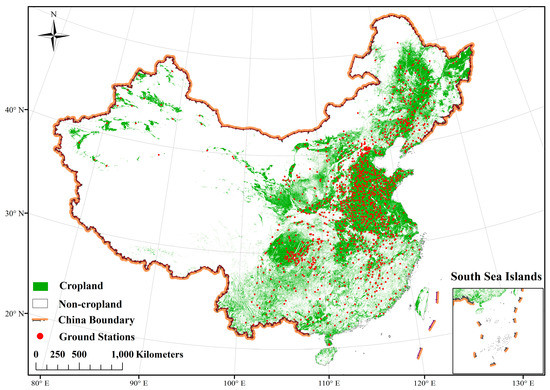 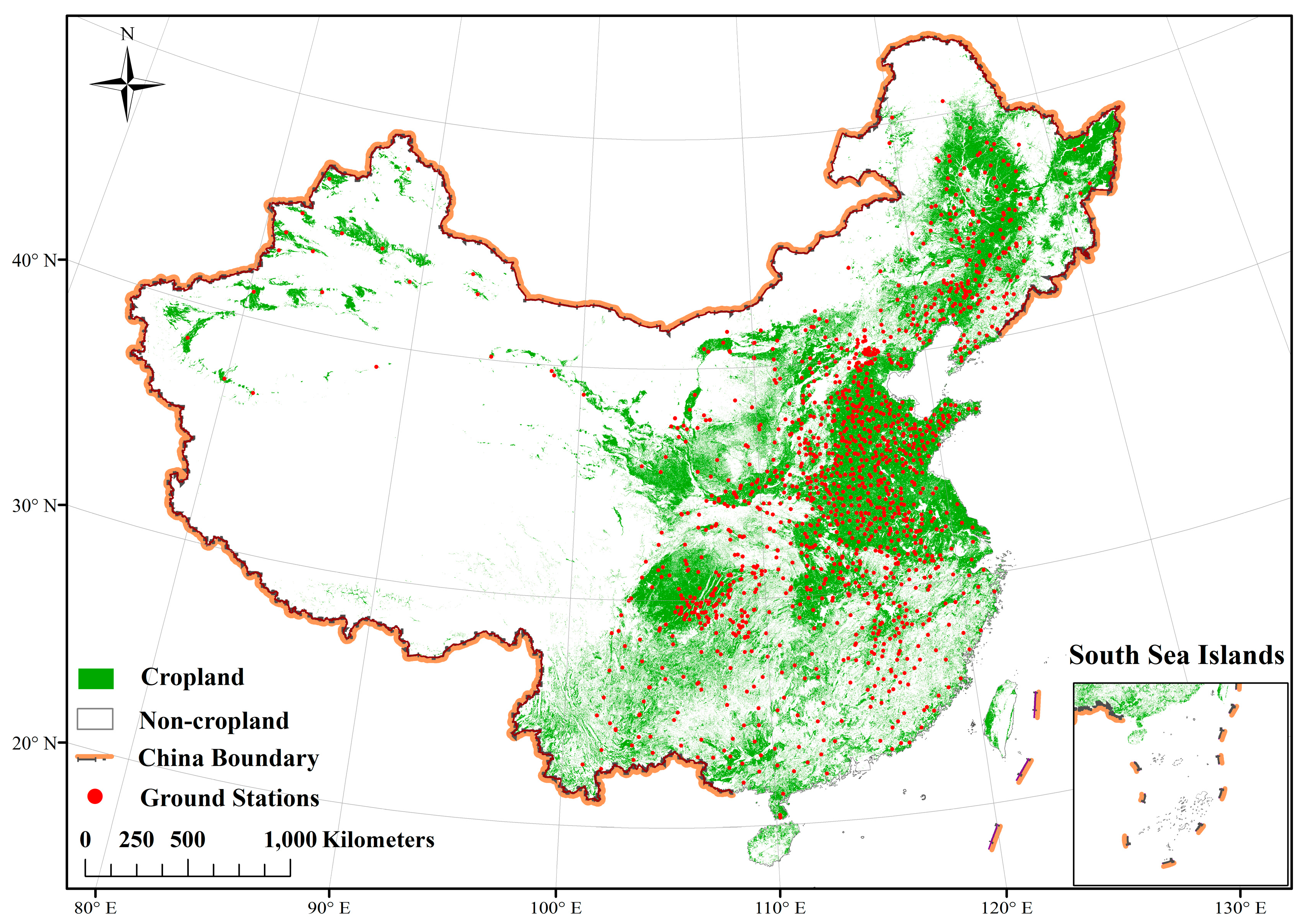 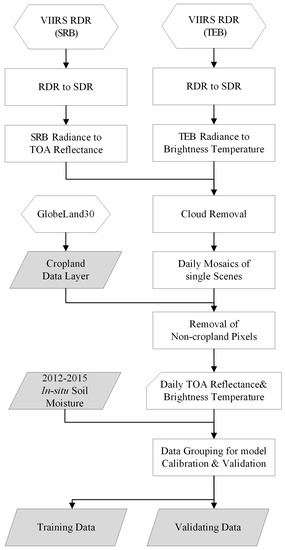 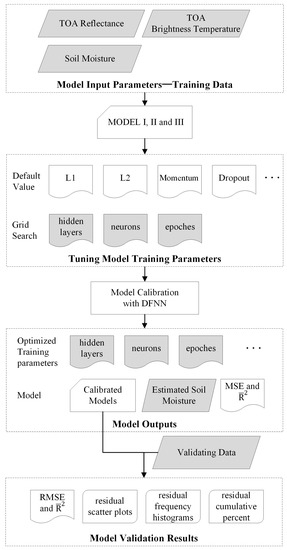 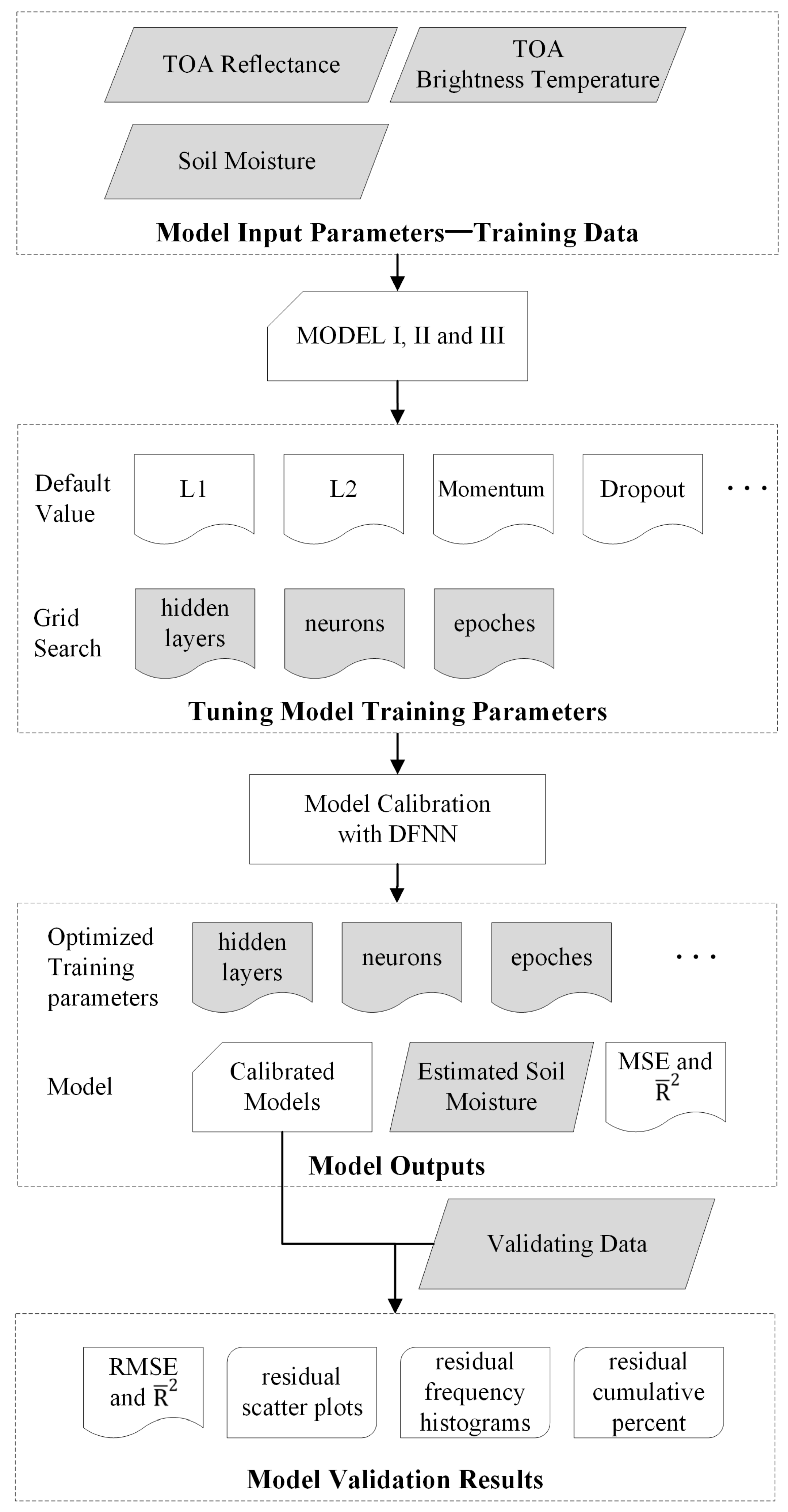 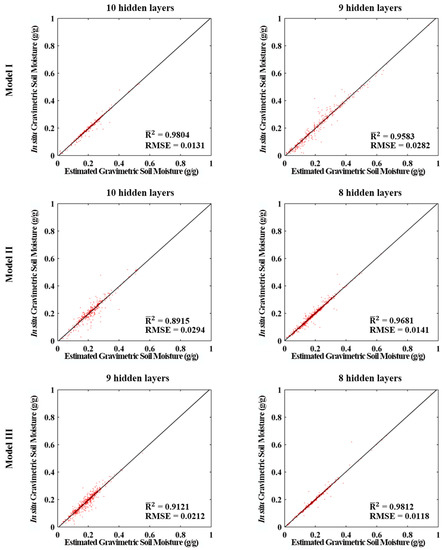 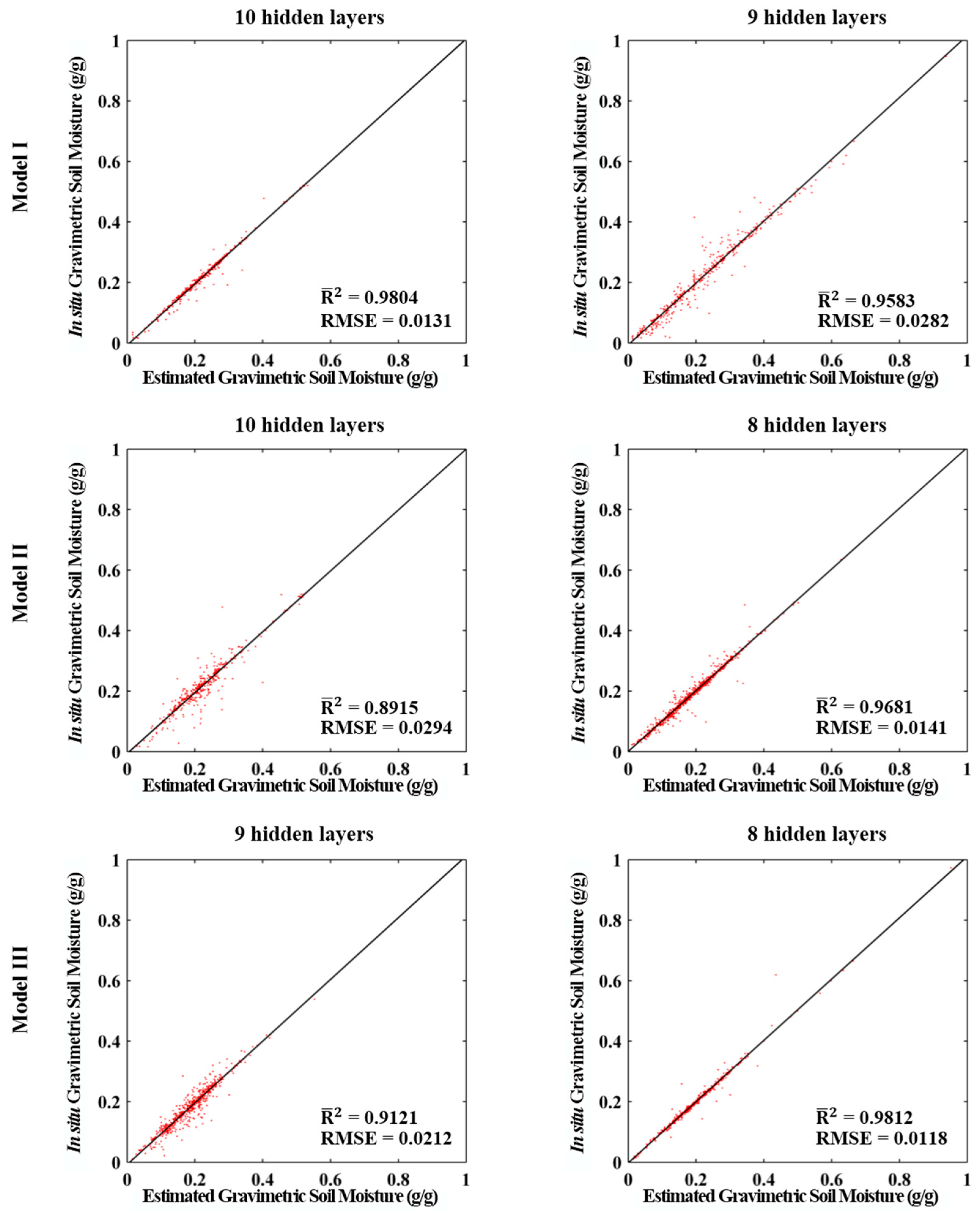 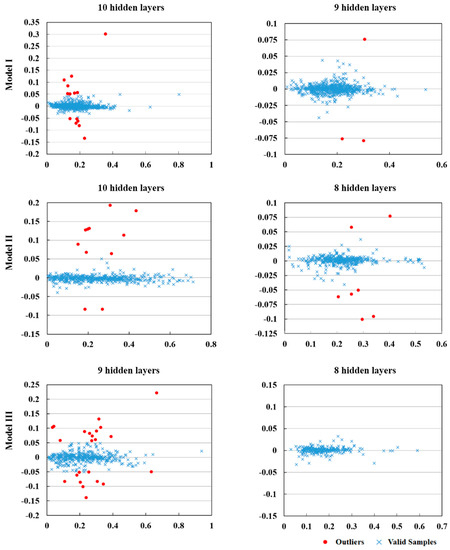 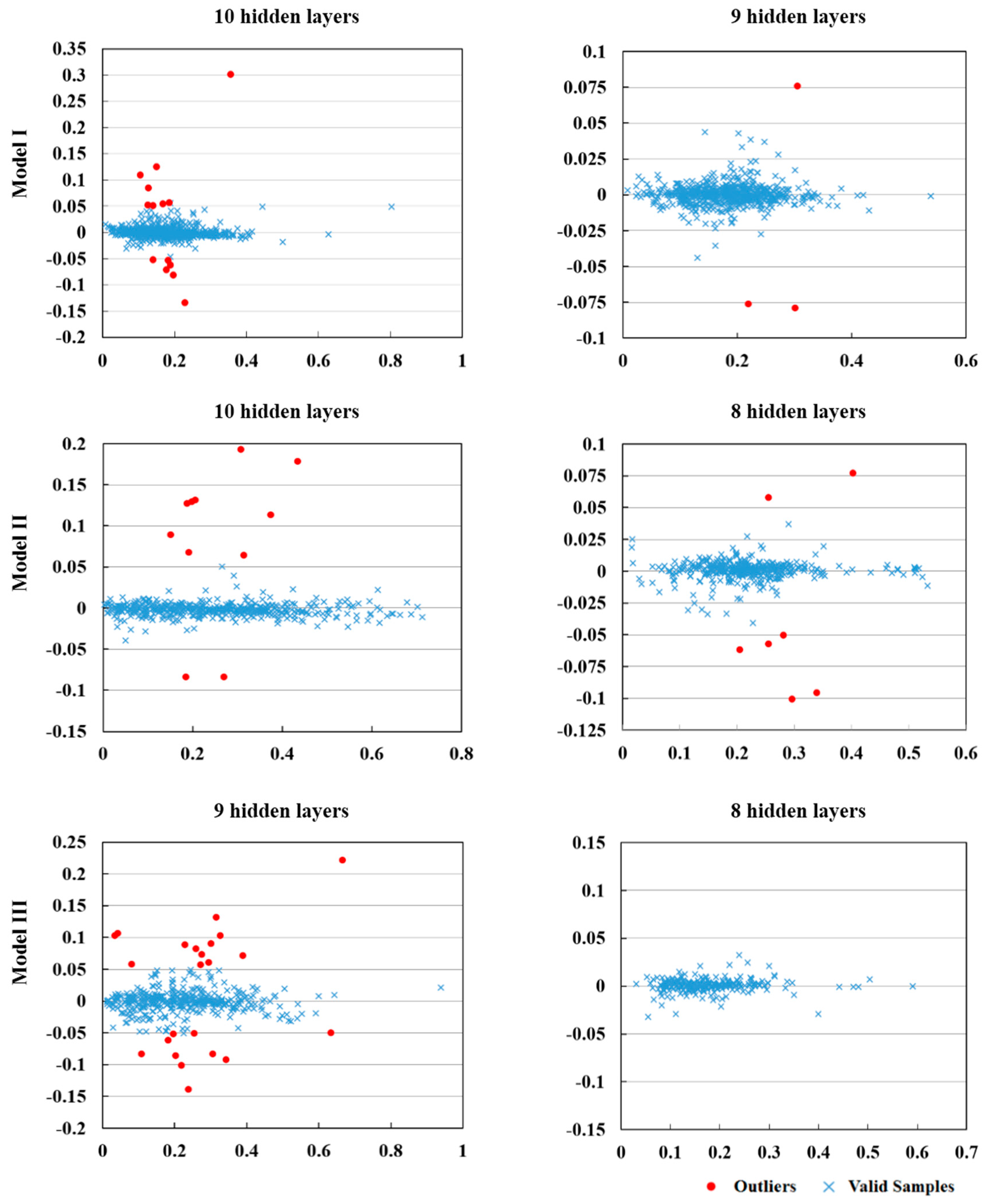 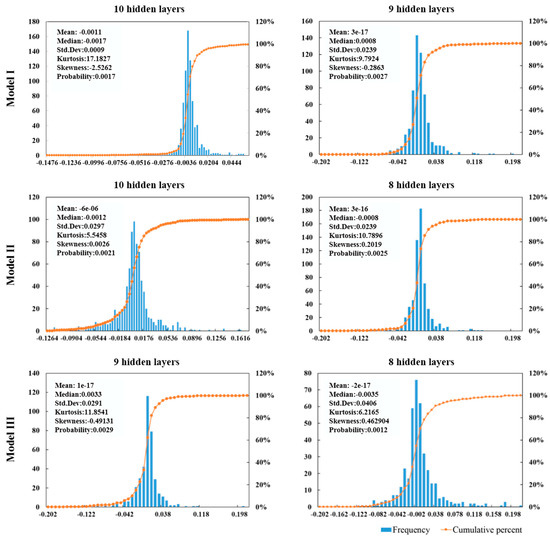 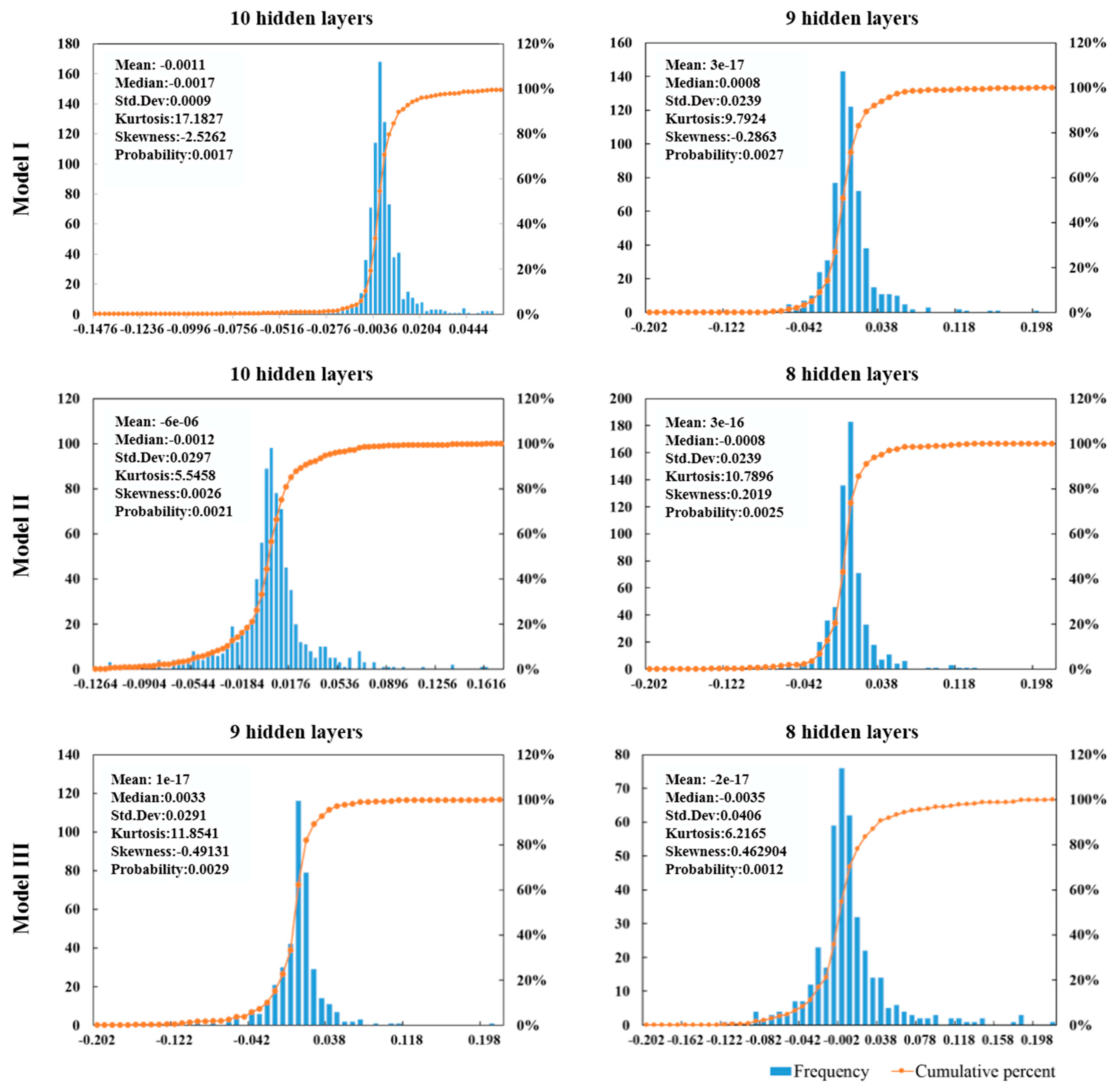 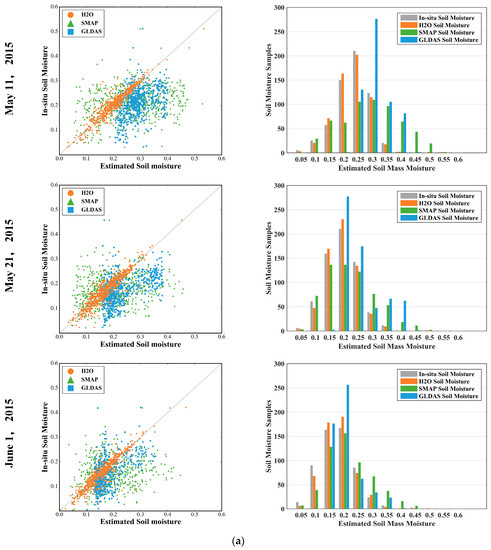 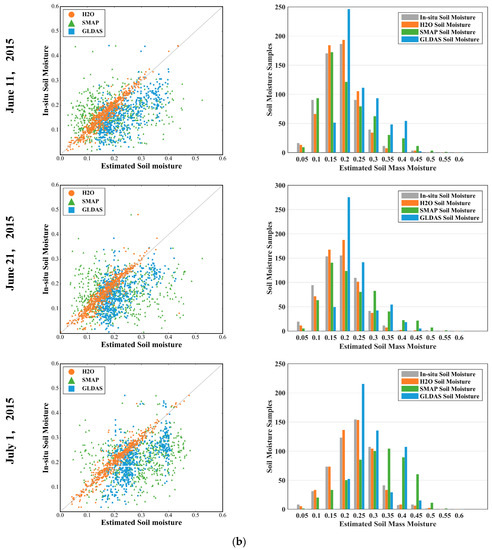 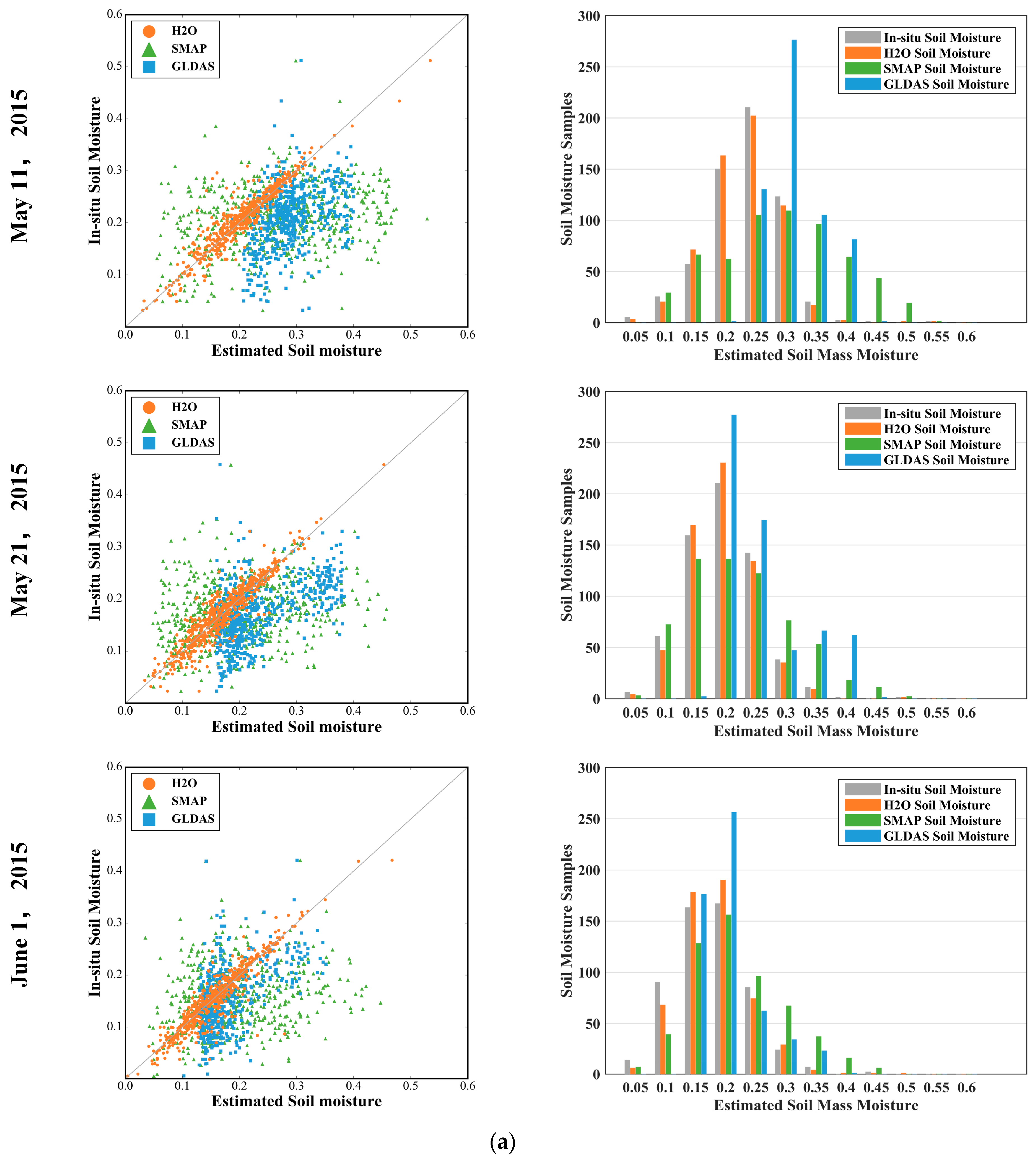 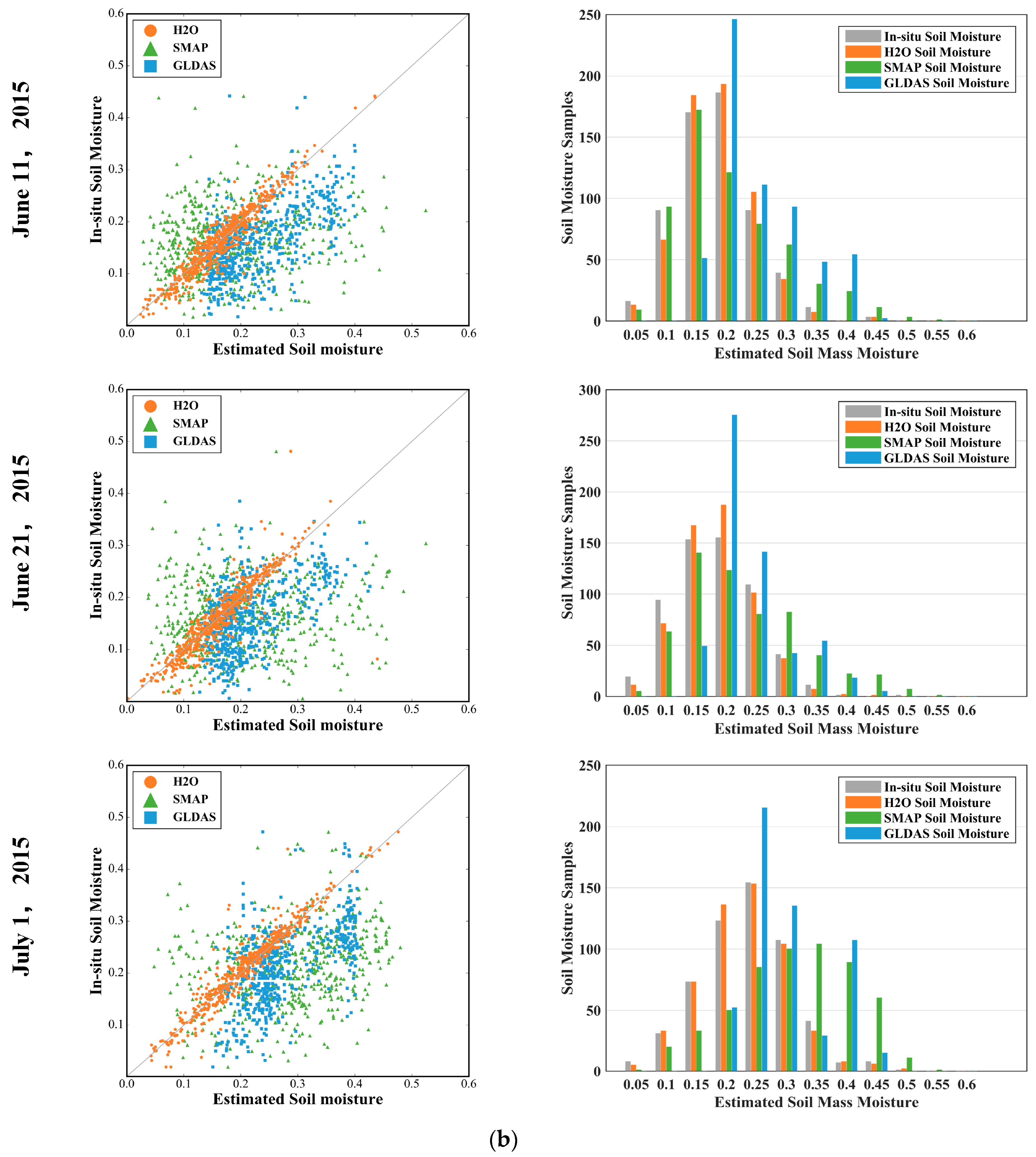 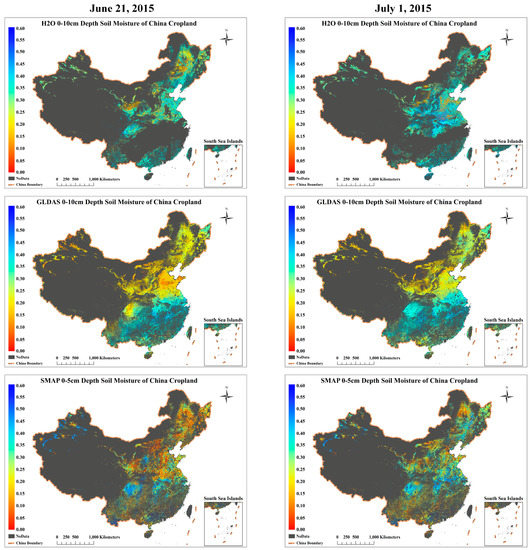 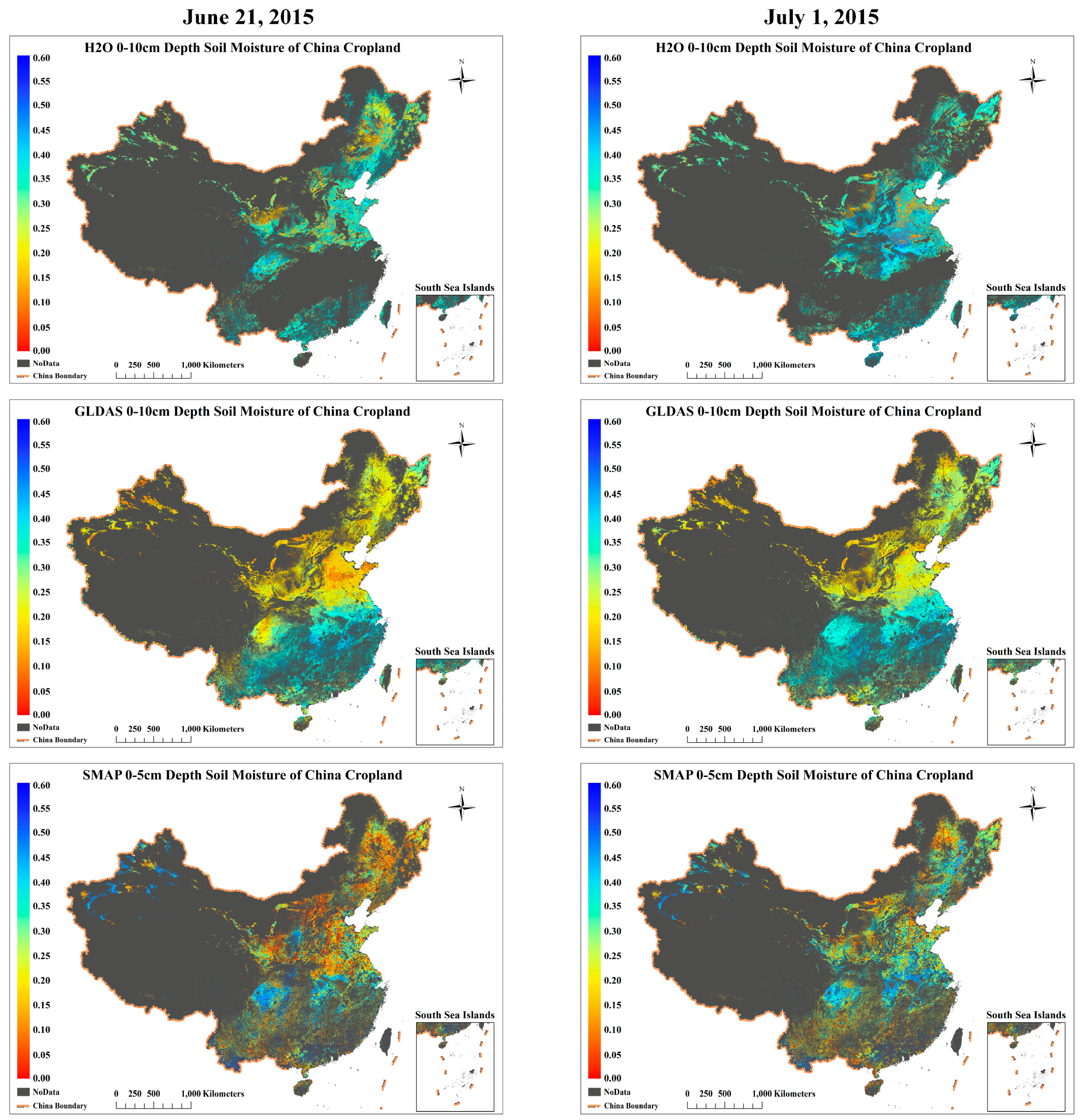