The relationship between burglary and socio-demographic factors has long been a hot topic in crime research. Spatial dependence and spatial heterogeneity are two issues to be addressed in modeling geographic data. When these two issues arise at the same time, it is difficult to model them simultaneously. A cross-comparison of three models is presented in this study to identify which spatial effect should be addressed first in crime analysis. The negative binominal model (NB), Bayesian hierarchical model (BHM) and the geographically weighted Poisson regression model (GWPR) were implemented based on a three-year residential burglary data set from ZG, China. The modeling result shows that both BHM and GWPR outperform NB as they capture either of the spatial effects. Compared to the NB model, the mean absolute deviation (MAD) of BHM and GWPR was decreased by 83.71% and 49.39%, the mean squared error (MSE) of BHM and GWPR was decreased by 97.88% and 77.15%, and the of BHM and GWPR was improved by 26.7% and 19.1%, respectively. In comparison with BHM and GWPR, BHM fits the data better with lower MAD, MSE and higher . The empirical analysis indicates that the percentage of renter population, percentage of people from other provinces, bus line density, and bus stop density have a significantly positive impact on the number of residential burglaries. The percentage of residents with a bachelor degree or higher, on the other hand, is negatively associated with the number of residential burglaries. View Full-Text
Keywords: residential burglary; spatial autocorrelation; spatial heterogeneity; BHM; GWPR residential burglary; spatial autocorrelation; spatial heterogeneity; BHM; GWPR
►▼ Show Figures 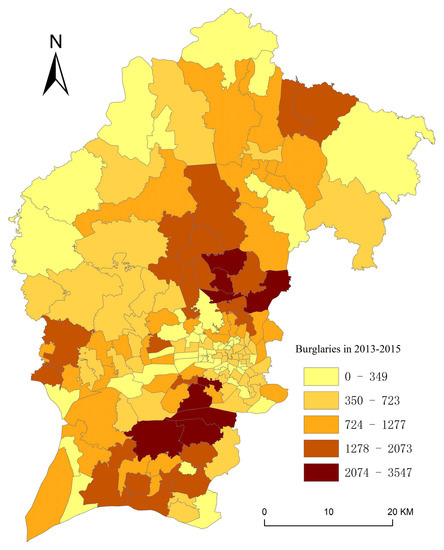