The arid valley in the upper reaches of the Min River is located at 31.27° N–32.43° N, 102.94° E–103.90° E, the transition zone from the Tibetan Plateau to the Sichuan Basin, and includes the drought areas of Wenchuan County, Li County, Mao County, Heishui County, and Songpan County in Sichuan Province, China (Figure 1a). In this region, the ranges of annual average temperature, precipitation, and evaporation are 6.7–14.6 °C, 454–798 mm, and 1300–1450 mm, respectively. Adapting to the vertical climate belt, the mountain vegetation vertical belt shows: small-leafed shrubs in the arid valley (1300–2200 m); deciduous broad-leaved and mixed coniferous broad-leaved forests (2000–2800 m); spruce and fir forests (2800–3600 m); alpine brushes and meadows (>3600 m); and the snow belt (>3900 m) [20]. The dominant shrub species in the arid valley belong to the temperate genera. They include the Convolvulus tragacanthoides, Ajania achilleoides, Aster smithianus, Artemisia gmelinii, etc. [25], and the main soil types developing under the shrubs are the yellow cinnamon soil and cinnamon soil. As the typical fragile ecological-environment zone in the upper reaches of the Yangtze River, the arid valley is characterized by a low threshold on ecological security, but is high risk in ecological degradation, with poor habitat suitability, frequent geological disasters (earthquake, landslide, debris flow, etc.), and strong human activities [26,33]. Ecological restoration and reconstruction in the arid valley has become an important aspect of current academic research and government work [17,34].

Meteorological Data: The datasets were obtained from the National Meteorological Information Centre of the China Meteorological Administration. They include the annual average temperature, annual precipitation, annual sunshine duration, annual average relative humidity, and annual evaporation of the five weather stations in the upper reaches of the Min River from 1999 to 2013 (Figure 1a, Table 1).
Remote Sensing Data: Due to the short time scale of the study, the arid valley boundary’s movement may be small and the high-resolution images were selected as the basic data. They include SPOT-2 and SPOT-4 image data in 1999, SPOT-6 image data in 2013, and Landsat MSS image data in 1974. Details of the remote sensing images are shown in Table 2.

3.2.1. Analysis on the Trend of Climate Change

3.2.2. Interpretation of the Arid Valley Boundary and Calculation of its Displacement

The Preprocessing of the Remote Sensing Image: Due to the unclear definition of the arid valley boundary, the arid valley in 1974 was interpreted for comparing with existing research [3] on the displacement rate. Using ERDAS IMAGINE software, the remote sensing images were preprocessed, such as the geometric correction, orthogonal correction, image fusion, image mosaic, and image cutting, in the WGS_1984_UTM_Zone_48N coordinate system (central meridian at 105° E).
Interpretation of the Arid Valley Boundary: First, the field investigation was conducted using a handheld GIS (Geographic Information System) data collector in typical regions of the arid valley in the upper reaches of the Min River. The surrounding information of sample sites were recorded [39]. Second, due to the existence of shadow areas in the SPOT image data, the Landsat images over the same period that were downloaded from the United States Geological Survey were referenced. Third, combined with the field investigation and the unsupervised classification of remote sensing images, the interpretation signatures of the arid valley boundary were established, which were mainly based on vegetation types, image color, and texture features. Finally, the arid valley boundaries in 1974, 1999, and 2013 were, respectively, interpreted by two persons simultaneously. The consistency of interpretation results were checked by using the maximum likelihood method: when the consistent rate was more than 90%, the inconsistent part was modified through consultation; when the consistent rate was less than 90%, the re-interpretation was conducted. The partial results are shown in Figure 2.
Calculation of the Displacement of the Arid Valley Boundary: Based on the Digital Elevation Model (DEM) (30 m), the elevation of the arid valley boundary was extracted and the linear data of the arid valley boundary was converted to point data. In order to conduct regularity research intuitively, segmenting the point data by altitude with an interval of 100 m was carried out in this study. The vertical displacement of the arid valley boundary was calculated by the average elevation difference on the same elevation segment in different periods.

During 1999–2013, temperature, evaporation, and precipitation increased, and sunshine duration and relative humidity showed decreasing tendencies in the upper reaches of the Min River (Table 3). Due to the differences in climate background and regional geographical characteristics, the climate change in the upper reaches of the Min River showed significant regional features and spatial pattern characteristics under the influences of global climate change (Figure 3).
The increase of drought factors (i.e., temperature, evaporation and sunshine duration) can make the regional climate more arid. The average increased rate of annual average temperature in the upper reaches of the Min River was 0.008 °C/a, which is lower than that in the Hengduan Mountains (0.015 °C/a during 1960–2008) [31]. The warming rate fluctuated between 0.002–0.023 °C/a with the increase in altitude, and the special geographical background made the center of the arid valley (Maoxian Station) become the high-value zone of regional warming with a rate of 0.018 °C/a (Figure 3a). Meanwhile, annual evaporation in the whole basin increased at an average rate of 5.51 mm/a, and the variation trends showed a “tow points and one belt” regional differentiation (Figure 3b). Wenchuan and Songpan are the two high-value centers of the evaporation increase, with increased rates of 15.86 mm/a and 14.34 mm/a, respectively. In the Maoxian-Heishui areas, the annual evaporation increased slowly or decreased slightly and the range of the change rate was −5.40–4.20 mm/a. However, the annual sunshine duration in the whole basin decreased at an average rate of −8.72 h/a. From Lixian to Heishui, the variation range of annual sunshine duration gradually slowed down and showed a horizontal zonal distribution (Figure 3c). The annual sunshine duration decreased with the fastest speed (−25.67 h/a) in the southern Zagunao River Basin, while showing a slower increased trend at the rate of 8.17 h/a in the northern Heishui River Basin.
The increase of moist factors (i.e., precipitation and relative humidity) represents the mitigation of climate drought. In the recent 15 years, the annual precipitation in the upper reaches of the Min River increased with the average rate of 2.25 mm/a (Figure 3d), slower than the increase of evaporation. While the annual average relative humidity in the whole basin decreased at the rate of −0.189%/a (Figure 3e). Furthermore, the variation rate of annual precipitation showed a significant negative linear correlation with altitude (r = −0.925, p = 0.024 < 0.05), and a significant quadratic positive correlation between the variation rates of relative humidity and temperature (r = 0.959, p = 0.0099 < 0.01). Hence, for the regional differentiation, the annual variations of moist factors in the upper reaches of the Min River are obviously related to the variation of annual average temperature.
The regional differentiation characteristics of drought factors and moisture factors reflect the influences of terrain conditions on climate change in the longitudinal range-gorge region [31]. Based on the differences of regional climate background, the arid valley in the upper reaches of the Min River can be divided into three types: the arid valley of the Shaba-Weizhou mainstream of the Min River, the semi-arid valley of the Heishui River Basin and the semi-arid and humid valley of the Zagunao River Basin. According to the analysis of regional differences in climate change: (1) in the central Shaba-Weizhou mainstream of the Min River, temperature and precipitation increased fastest, sunshine duration and evaporation both slightly reduced, and relative humidity slightly increased, causing the regional climate to become warm and humid. (2) In the northern Heishui River Basin, the trend of warmth and humidity in the climate was less obvious due to the increase in sunshine duration and the decrease in relative humidity. (3) In the southern Zagunao River Basin, the annual evaporation showed an increased trend and the annual average relative humidity decreased faster than that in the Heishui River Basin, causing the climate to become warm and dry in the past 15 years.

4.3. Relationship between the Arid Valley Boundary’s Displacement and Climate Change

4.3.1. Analysis of the Upper Reaches of the Min River

The displacement of the arid valley boundary is one of the response indicators to climate change in the natural mountainous ecosystem. The habitat conditions and climatic change characteristics in the region have significant influences on the arid valley boundary’s variation in the upper reaches of the Min River. This study provides new research on mountainous environmental change. It can also give guidance for regional ecological construction and eco-environment assessments in accordance with regional differences on the water-heat balance. Based on the results, in the Shaba-Weizhou mainstream of the Min River, the current climate change has been advantageous for the improvement of regional moisture conditions. However, it is not enough to improve the habitat environment, showed as a slight upward movement of the arid valley boundary. Thus, water conservancy construction should become the main task. As for the Heishui River Basin, ecological construction should focus on water conservation due to the significant correlation between evaporation increase and the arid valley boundary’s displacement. Additionally, the warm and humid trend on climate change has been shown in the Shaba-Weizhou mainstream of the Min River and the Heishui River Basin. It is certainly beneficial to local ecological restoration and the development of regional eco-environment quality. For the Zagunao River Basin, the climate is relatively humid, but has a warm and dry tendency, and water conservation must also be strengthened. Due to the arduousness and long-term task of ecological construction in the arid valley of the upper reaches of the Min River, only with scientific cognition of regional environmental characteristics and reasonable artificial regulation can it be effectively carried out.

Yalin Guo conceived and designed the research method; Yalin Guo and Min Fan analyzed the data; and Yalin Guo and Qing Wang wrote the paper. All authors read and approved the final manuscript. 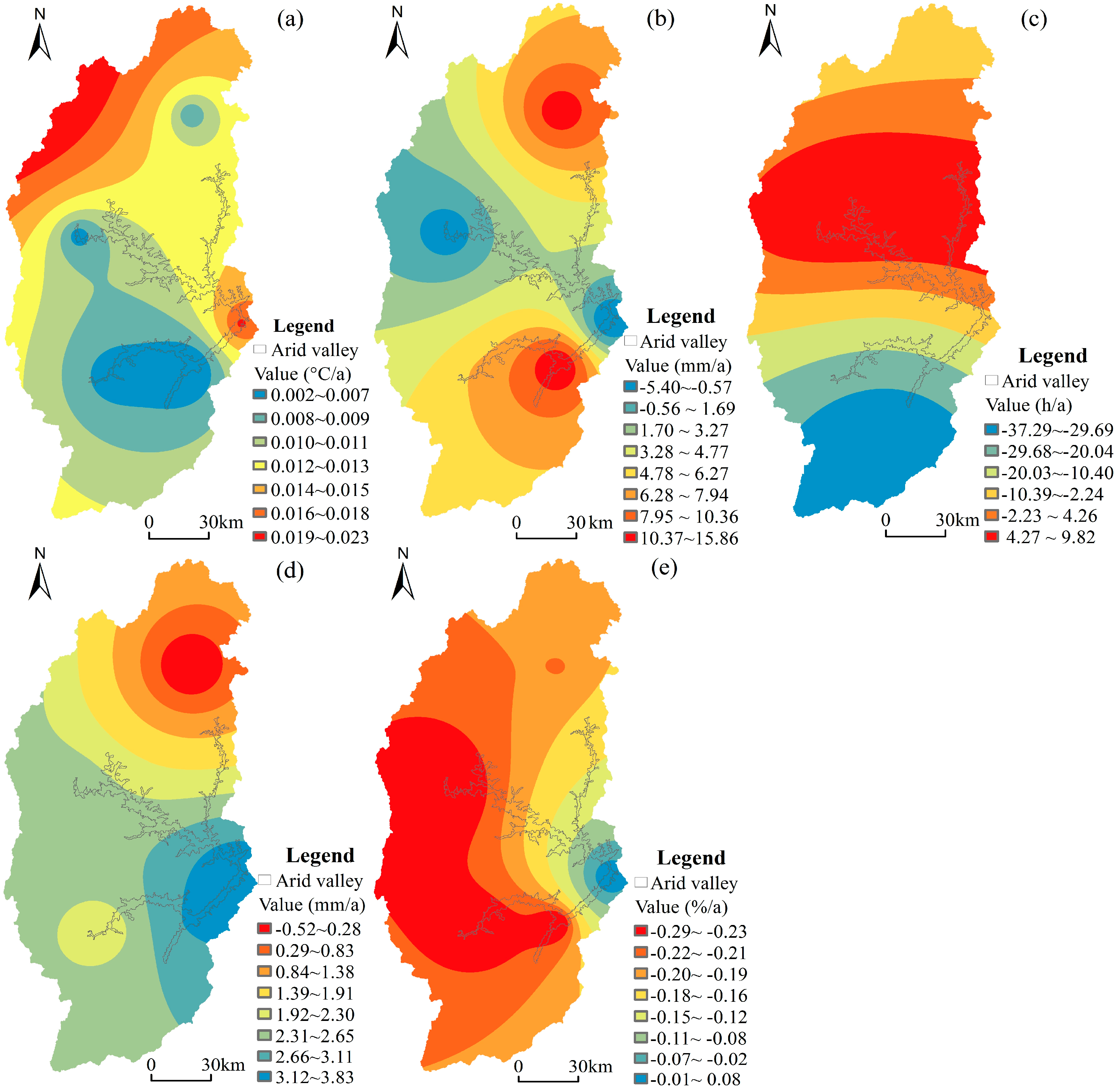 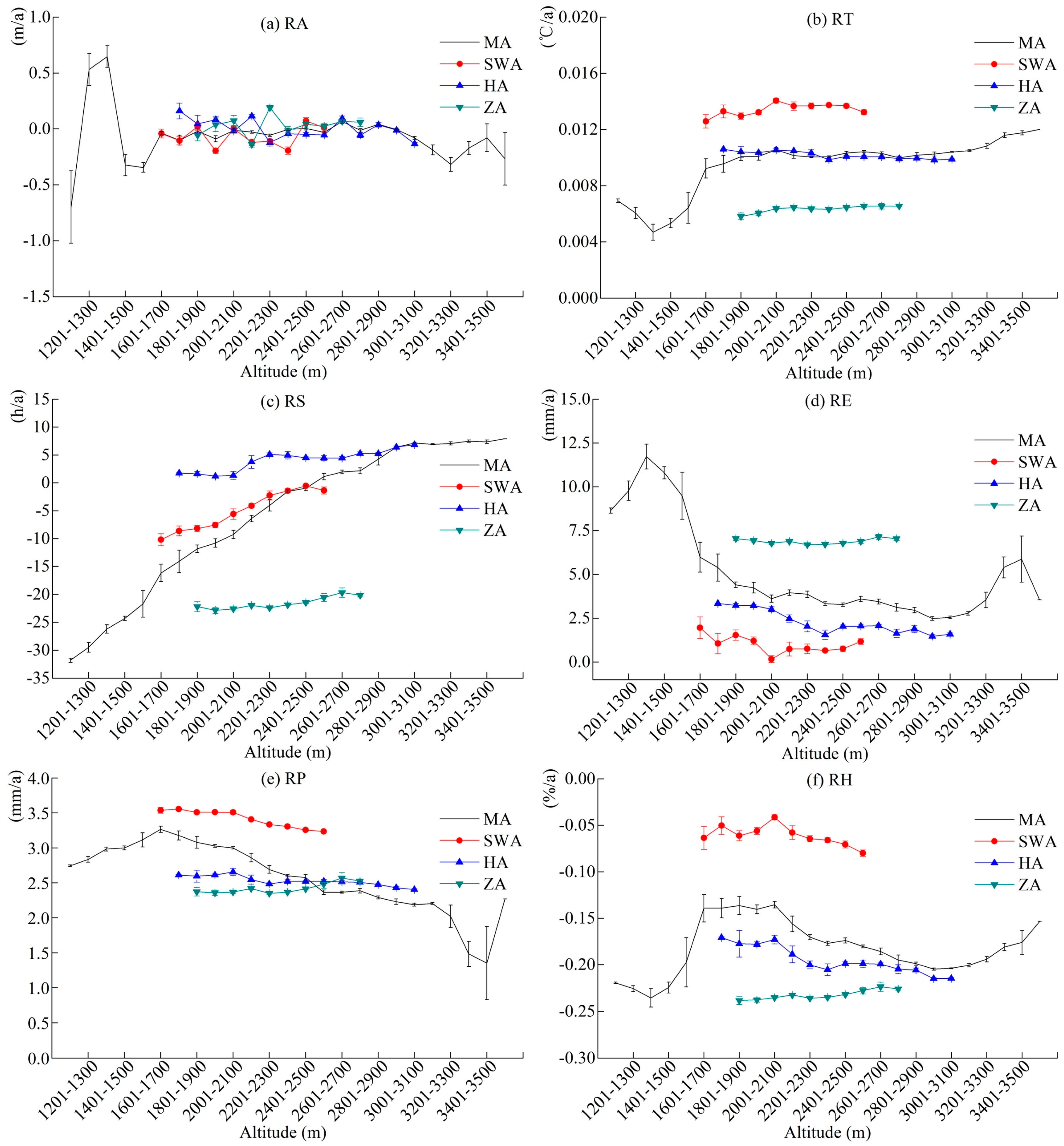