The Standardization and Harmonization of Land Cover Classification Systems towards Harmonized Datasets: A Review
Previous Article in Journal

2.1. Space of Flows and Geographical Centrality

GGCI and LGCI vary with different spatial structures and spatial interaction structures in different regions; thus, no absolute standard exists to determine whether GGCI and LGCI are high or low. We aim to avoid random factors influencing GGCI and LGCI. For this purpose, we refer to the random permutation operation of the Moran’s I method widely used in spatial autocorrelation analysis to test the significance of GGCI and LGCI and evaluate the reliability of geographical centrality. Random permutation of geographical centrality randomly permutes rows and columns of the spatial interaction matrix simultaneously and does not change the spatial weight matrix. This operation does not change the geospatial structure and spatial interaction structure and permutes the interaction relationships of a spatial unit at a specific location with other units. After numbers of random permutations and calculation of GGCI and LGCI, the simulated distributions of GGCI and LGCI are generated. Then, the corresponding significance test can be conducted accordingly. The significance level in this research is 0.05 by default.

3.1. Data Sources and the Basic Characters

The primary difficulty in urban network study is data acquisition. Previous studies mostly used the distribution data of headquarters and branches of multi-location enterprises (e.g., advanced producer service enterprises and multinational enterprises) or network data of infrastructures (e.g., air passenger flows and telecommunication flows among cities) [10]. In recent years, the development and popularization of smartphones and mobile Internet services (e.g., social network services and location-based services) have changed the data environment and facilitated the emergence of urban network studies based on big data [36]. In this research, we use urban network data containing 370 prefecture-level units in China shared by Liu et al. to validate the proposed analysis method of geographical centrality in the case study. The data are derived from a major location-based social network platform in China, containing 23.5 million valid checkin data from September 2011 to September 2012 Supplementary Materials [37].
The spatial distribution of spatial interaction (Figure 2a) shows strong interactions among Beijing, Shanghai, Guangzhou, and Chengdu, thereby forming a typical diamond-shaped urban network structure in China. The statistical distribution of spatial interaction (Figure 2b) shows that the strength of intercity interaction is a power-law distribution, which indicates that most intercity interactions are weak and less is strong. As the distance between cities increases, the number of city pairs interacting with each other at each distance segment decreases, and the number of city pairs with strong interaction also decreases. Furthermore, the strength distribution becomes narrow, and the mean and median become gradually small. This situation indicates that geographical space still dominates spatial interaction at the national scale. However, the diamond-shaped urban network structure also shows that high-strength and long-distance interaction have already occurred under the effect of space of flows.

The proposed analysis method of geographical centrality needs a distance threshold σ to determine whether a distance is short or long. Such a problem of spatial scale selection is considered by many geospatial analysis methods. Two aspects need to be considered to solve this problem. One is determining the characteristic spatial scales for the specific geospatial problem, and the other is determining the practical significance of the selected scale. The intercity interaction data based on the social network in China (Figure 3a) show that, with the increase in σ, the averages of SDII and LDII decrease and GGCI increases. The reason is that spatial interaction is stronger in short distance than in long distance. With the increase in σ, some long-distance weak interactions are added to SDII, while some short-distance strong interactions are removed from LDII. Consequently, both SDII and LDII decrease. The increase in GGCI is due to that short-distance space expands into long-distance space actually dominated by space of flows, such that the gap between SDII and LDII narrows. Furthermore, SDII is one order of magnitude larger than LDII at every spatial scale. This finding further indicates that geographical space plays a relatively more important role than space of flows in spatial interaction. Therefore, the proposed SDII and LDII are relative and generally need to be logarithmically transformed. Moreover, curves within 500 km are all changed rapidly, while they are stable beyond 2000 km. The spatial distribution map of cities in China (Figure 3b) with Beijing, Shanghai, Guangzhou, and Chengdu as centers shows that the radius of 250 km covers most cities in their corresponding urban agglomerations; the radius of 500 km covers most of the provincial capital cities nearby; the radius of 750 km nearly covers the entire area of provinces nearby. Therefore, we define the three spatial scales as the urban agglomeration scale, regional scale, and large regional scale. If the radius exceeds 750 km, large overlaps will exist among short-distance spaces of different cities, thereby leading to loss of practical significance of the spatial scale. Therefore, three spatial scales, 250, 500, and 750 km, are chosen for further analysis of geographical centrality.
As shown in scatterplots of geographical centrality (Figure 4a,c,e), the distributions of SDII and LDII at three spatial scales are all lognormal distribution, and spatial units of cities are distributed in the direction of first-third quadrants. Furthermore, most of the significant units are located in the first and third quadrants, which are identified as global centers and isolated units, respectively. This situation suggests that short- and long-distance interactions are relatively synchronous. The effects of spatial distance and geographical space are relatively limited at the national scale, while space of flows is relatively significant. This situation is proven by the large and significant GGCI. With the increase in the spatial scale, the number of significant global centers and isolated units gradually decreases, while the number of externally and locally oriented units increases. Moreover, the GGCIs at three spatial scales are 0.8262, 0.8669, and 0.8789, respectively. The corresponding significances are 0, 0.0001, and 0.1227. In other words, GGCI gradually increases but its significance decreases. The reason is due to that short-distance space expands into long-distance space actually dominated by space of flows with the increase in the spatial scale.
The spatial distribution of significant units of geographical centrality (Figure 4b,d,f) at the urban agglomeration scale of 250 km shows that core cities of the main urban agglomerations in China are all identified as global centers, such as Beijing and Tianjin in the Beijing–Tianjin–Hebei urban agglomeration, Shanghai, Hangzhou, Nanjing, Ningbo, and 13 other cities in the Yangtze River Delta urban agglomeration, Guangzhou, Shenzhen, and Hong Kong in the Pearl River Delta urban agglomeration, Chengdu in the Chengdu–Chongqing urban agglomeration, Wuhan in the Wuhan urban agglomeration, Xi’an in the Guanzhong urban agglomeration, Jinan and Qingdao in the Shandong Peninsula urban agglomeration, Xiamen in the urban agglomeration of the west coast of the Taiwan Straits, and Kunming in the urban agglomeration of the central Yunnan. Moreover, Lijiang, which is a tourist city, is also identified as a global center. This situation may be because of the strong attraction of tourist cities shown on the social network. A total of 11 isolated units distribute in remote provinces, such as Qinghai, Gansu, and Hainan; three locally oriented units are located around western provincial capital cities, namely, Urumqi, Lhasa and Kunming; no externally oriented units are found. At the regional scale of 500 km, the number of global centers decreases from 26 to 14, and most of them are located in the Beijing–Tianjin–Hebei region, Yangtze River Delta, Pearl River Delta, and the Chengdu–Chongqing economic zone; these areas are the four endpoints of the diamond-shaped urban network structure in China. The number of isolated units decreases from 11 to 4, and these units are still located in Qinghai and Hainan. Four externally oriented units emerge in Hubei and Jiangxi, and the locally oriented units are nearly the same as those at the urban agglomeration scale. At the large regional scale of 750 km, four types of geographical centrality change in numbers but retain the spatial distributions.
According to the analysis at three different spatial scales, the urban agglomeration scale of 250 km can effectively identify the core cities of the main urban agglomerations in China. Moreover, the regional scale of 500 km and the large regional scale of 750 km have similar analysis results, which can identify the central cities in the four areas of east, west, south, and north in China. Furthermore, a global center cluster is formed in Yangtze River Delta; however, the northeast, northwest, and central regions of China lack central cities to promote their regional development. In addition, isolated units, externally oriented units, and locally oriented units are mostly located in remote areas, central provinces, and around western provincial capital cities, respectively.

4.1. Geographical Centrality Based on Space of Flows and Other Centralities

4.2. Geographical Centrality Based on Space of Flows and Moran's I

This research was funded by the National Science & Technology Support Program of China (No. 2012BAJ22B02). 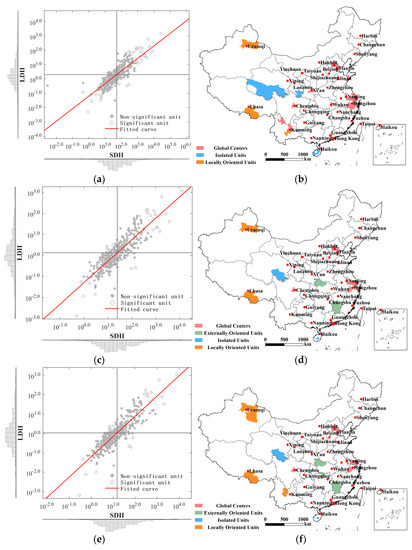 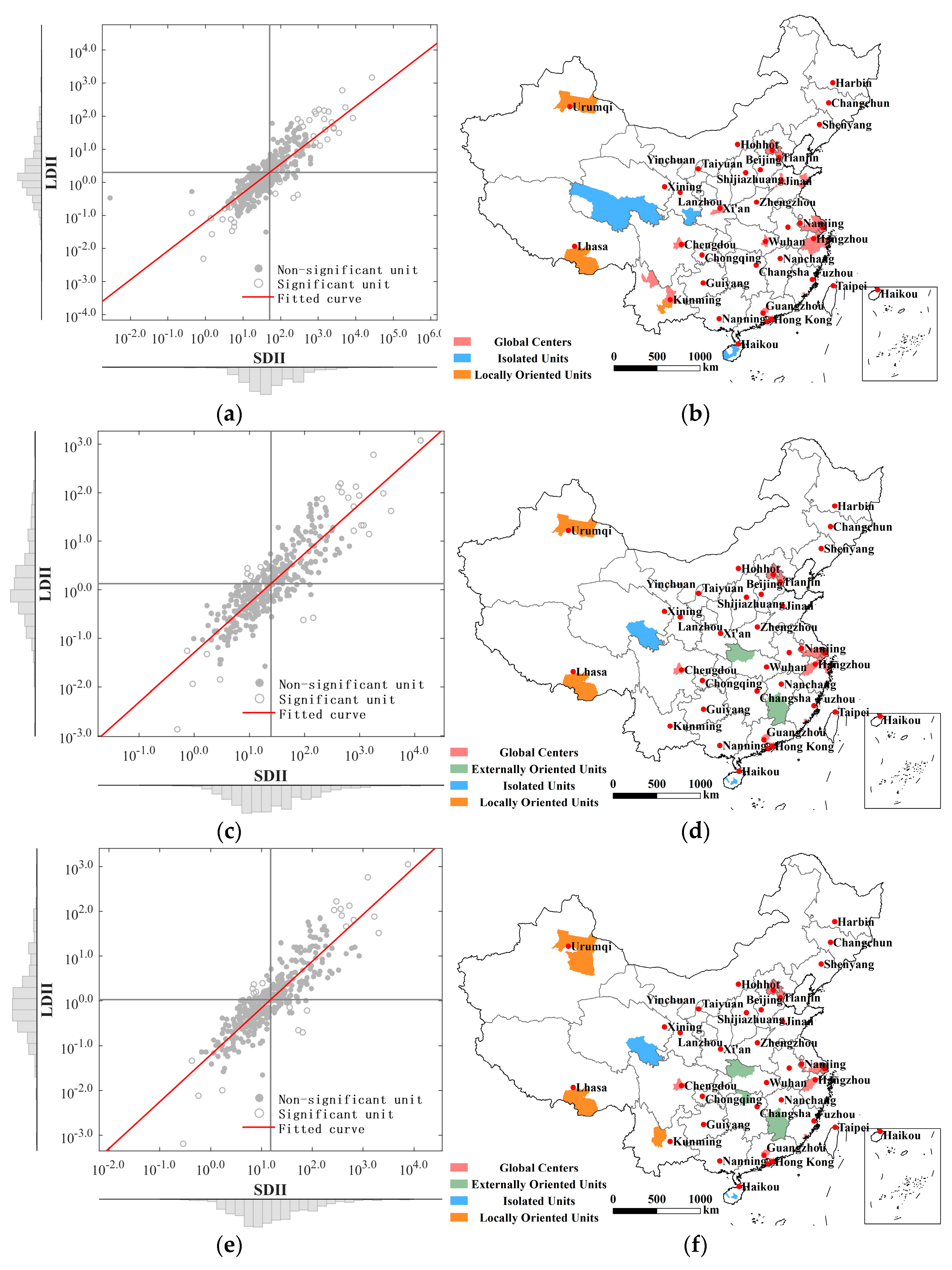 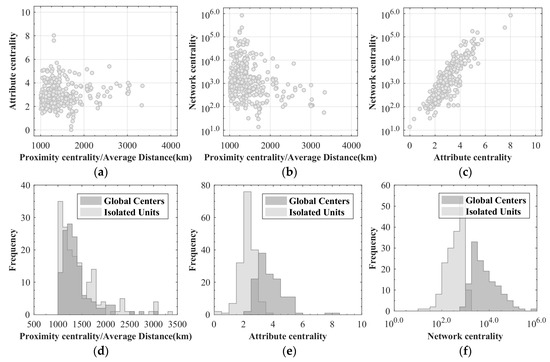 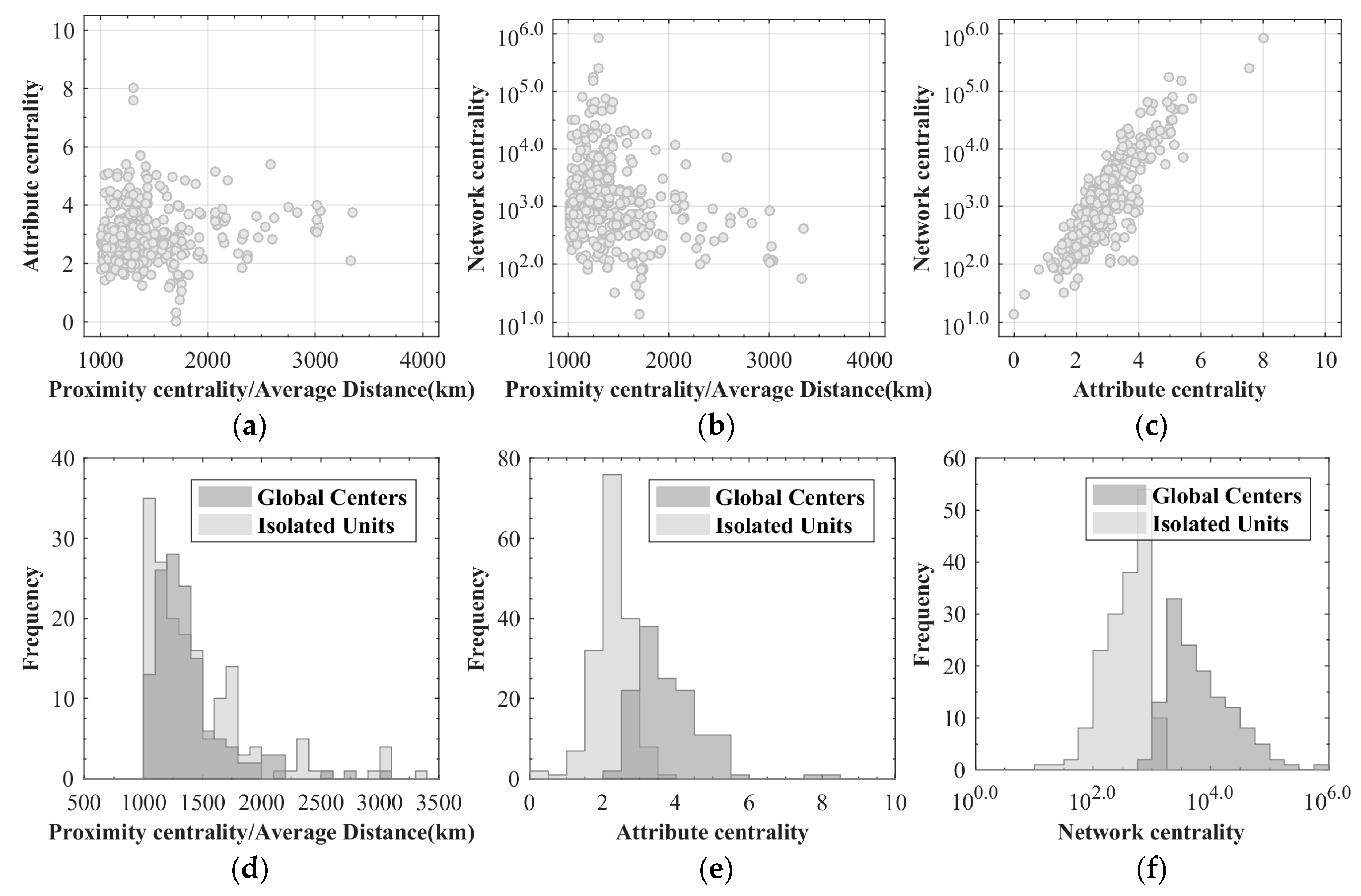