Development and Comparison of Species Distribution Models for Forest Inventories

The study area (36°38′–37°29′ N, 99°52′–100°50′ E) is located in the southeast part of the Qinghai Lake Basin, on the Tibetan Plateau, China (Figure 1). The long-term combined action of geological movement and external forces have formed a complicated and diverse array of geomorphic features in the area. The study area covers a total of 2100 km2, with an altitude ranging between 3043 and 4516 m, and is characterized by complex landforms, including mountains, hills, tablelands, and plains. Abundant agricultural and husbandry activities are carried out in the area.
The study area is characterized by 6 soil types (Figure 2a); 12 geology types, including alluvial terrace, denudate high terrace, and diluvial plain (Figure 2b); and 8 land use types, including cropland, grassland, and potential arable land (Figure 2c). The grassland can be divided into 20 types, mainly including Achnatherum splendens, leymus, and Blysmus sinocompressus (Figure 2d). We calculated the statistical characteristics of soil K+ in secondary variables using 110 training samples (Table 1).
Field sampling of surface soil (0–30 cm) at 110 sampling points was carried out in September 2013 to supplement map data. The mean distance between soil sampling locations was approximately 6.74 km. The sampling sites were designed to cover the whole area and include different landscapes. In order to ensure rational distribution of the sampling points across the different geo-environments, a spatially stratified sampling strategy was applied based on landscape types [20]. Supported by the Qinghai Environmental Monitoring Center, we recorded information such as soil type, altitude, geology, and land use for each sample location. Each position was sampled three times and the mean was recorded as the sample value. Soil samples were taken back to the laboratory for analysis. After air drying, grinding, and screening through a 2 mm sieve, soil K+ of the samples was measured using sodium hydroxide melting analysis [21].
The secondary variables were compiled in ArcGIS 10.2, and converted to a resolution ratio of 30 m through resampling. Since the study area covers a comparatively large range of landscape types, and the number of samples was relatively small, the spatial distribution of samples was uneven (Figure 1) and some landscape types with a relatively high degree of fragmentation are poorly represented. In the study area, the subtypes of secondary variables not sampled anywhere covered only a very small area (i.e., scrubland; Figure 2c; Table 1). For this area, we directly used the nearest five-point surrounding values for the subtype to calculate the mean value.

IDW is a deterministic method for multivariate interpolation using a known scattered set of points. Values assigned to unknown points are calculated with a weighted average of the values available at known points. Weights are usually inversely proportional to the power of distance [22], which, at an unsampled location x, leads to an estimator: where Z*(x) is the predicted value, Z (xi) is the measured value, n is the number of closest points (typically 10 to 30), p is a parameter (typically p = 2), and d is the cut-off distance.

Kriging interpolation is considered the best unbiased linear estimation method [23]. When the mathematical expectation of the regionalized variable Z*(x) is unknown, it is termed ordinary kriging. Z*(x), the estimated value of variables at point x, is obtained by the linear combination of n Z (xi)s, the effective observed value, using the expression: where is the weight given to the observed value and represents the contribution of each observed value to the estimated value Z*(x). It can be calculated by the semi-variance function of the variables on the condition that the estimated value is unbiased and optimal. The semi-variance function can be expressed by the equation: where is the semi-variance, N(h) is the point group number at distance h, is the numerical value at position , and is the numerical value at distance .

Based on fitted nugget, sill, and range values, the semi-variogram model was selected for analysis of spatial correlation. Other models were considered, including exponential, spherical, Bessel, circular, and Gaussian, while exponential and K-Bessel models were selected for the OK and base interpolation models as they better fitted the data/residuals (Figure 4). To determine the number of kriging samples, we chose the best samples from 5 to 30 at 5-step intervals.
The spatial correlation of residuals showed good performance after removal of the local mean within the different secondary variables (Table 2). All of the semi-variograms of residuals tended to show a smaller sill and a shorter range, indicating that drift had been removed [26]. The nugget/sill ratio (N/S) of residuals was <0.3 for all models except OK-Geology, which indicates strong spatial correlation of the residual data [27]; the spatial correlation increased after trend removal. This finding suggests that the OK and base interpolation models were appropriate for the study area.
The secondary variables used for each method were analyzed by ANOVA. The soil K+ data were grouped into classes in order to compare soil K+ for the different secondary variables. For example, in terms of soil type, the soil K+ data were grouped into five classes: alpine meadow soil, chestnut soil, flow sandy soil, meadow marsh soil, and semi-fixed sandy soil, with 32, 54, 10, 6, and 8 samples in each, respectively. The soil K+ variances between and within soil types were determined by ANOVA using SPSS 21.0 for Windows.

The ANOVA results comparing the influence of different secondary variables on Soil K+ are shown in Table 3. Geology type, soil type, and land use type are strongly correlated with the spatial variation in soil K+, with significance at the 0.01 level. However, grassland type is poorly correlated with soil K+ (significance level of 0.2). This is mainly due to the larger degree of fragmentation of the soil map of grassland types, and the limited number of sample points for some grassland, with some subtypes of grassland having just 1 or 2 sampling points (Table 1). Hence, grassland type was not used in the process of constructing the base interpolation and ASM-SP models.

3.3.1. Construction of Base Interpolation Models

Step one: Equation (4) was used to calculate mean soil K+ for each geological factor and obtain mean surface m(Emn). The mean soil K+ was correlated to the secondary variables, based on measured values of soil K+ (Figure 5).
Step two: The mean value of soil K+ was subtracted from the measured value to calculate the residuals of soil K+. The residuals were then interpolated by OK to obtain the residual surface r(xmn,ymn) (Figure 6).
Step three: The mean (Figure 5) and residual surfaces (Figure 6) were added to give z(xmn,ymn), the spatial interpolation result of soil K+ that integrates the secondary variables, which is the base interpolation surface to be integrated.

The predictive capabilities of the six interpolation methods in terms of the soil K+ maps are compared in Figure 10. The IDW interpolation gives a good representation of the overall pattern of soil K+ distribution, but the accuracy of small scale variations is low. Also, a relatively strong ‘bull’s-eye’ effect is created in areas with greater or fewer sampling points. The simulation surface of OK is smoother and its interpolation range is at an intermediate level. Owing to the smoothing effect of kriging, the range of variation in soil K+ is narrower than the true value, which is what has been found in other studies [28,29,30,31]. The OK map also shows a weak ‘bull’s-eye’ effect. The OK-Landuse, OK-Geology, and OK-Soil maps eliminate the smoothing effect of OK interpolation relatively well, and their interpolation accuracy is slightly higher. The ASM-SP method is most effective in depicting the pattern of spatial variation in soil K+ and has a moderate interpolation range (1.31–2.38), and can give more details of soil K+ distribution in different secondary variables, especially in the abrupt boundary. In contrast, soil K+ values of OK and IDW interpolation map did not have the discrete information. The method has stronger adaptability to the spatial interpolation of soil properties in areas with complex landforms, which allowed it to describe the patterns of spatial variation in soil properties in the study area more accurately.

Based on the above, it is clear that the interpolation results derived from the ASM-SP method provide a better physical explanation of the spatial variation in soil properties. Also, the simulation accuracy of ASM-SP is greatly enhanced compared with OK, OK-Landuse, OK-Soil, OK-Geology etc. Thus, ASM-SP is a more suitable method for application in areas with complex landforms.

This study was supported by the National Natural Science Foundation of China (Grant No. 41601405). We are grateful to the Qinghai Environmental Monitoring Center for providing topsoil sampling approval. Thanks to the China Soil Investigation Office and the Bureau of Geological Exploration & Development of Qinghai Province for providing secondary datasets. 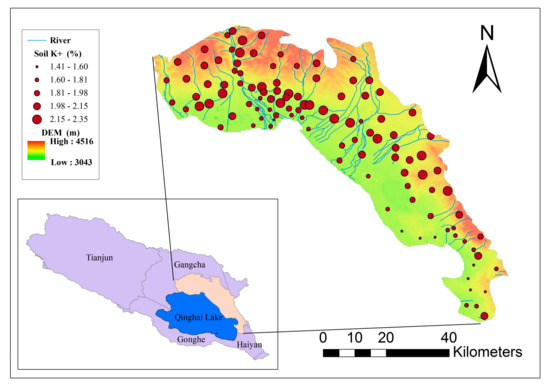 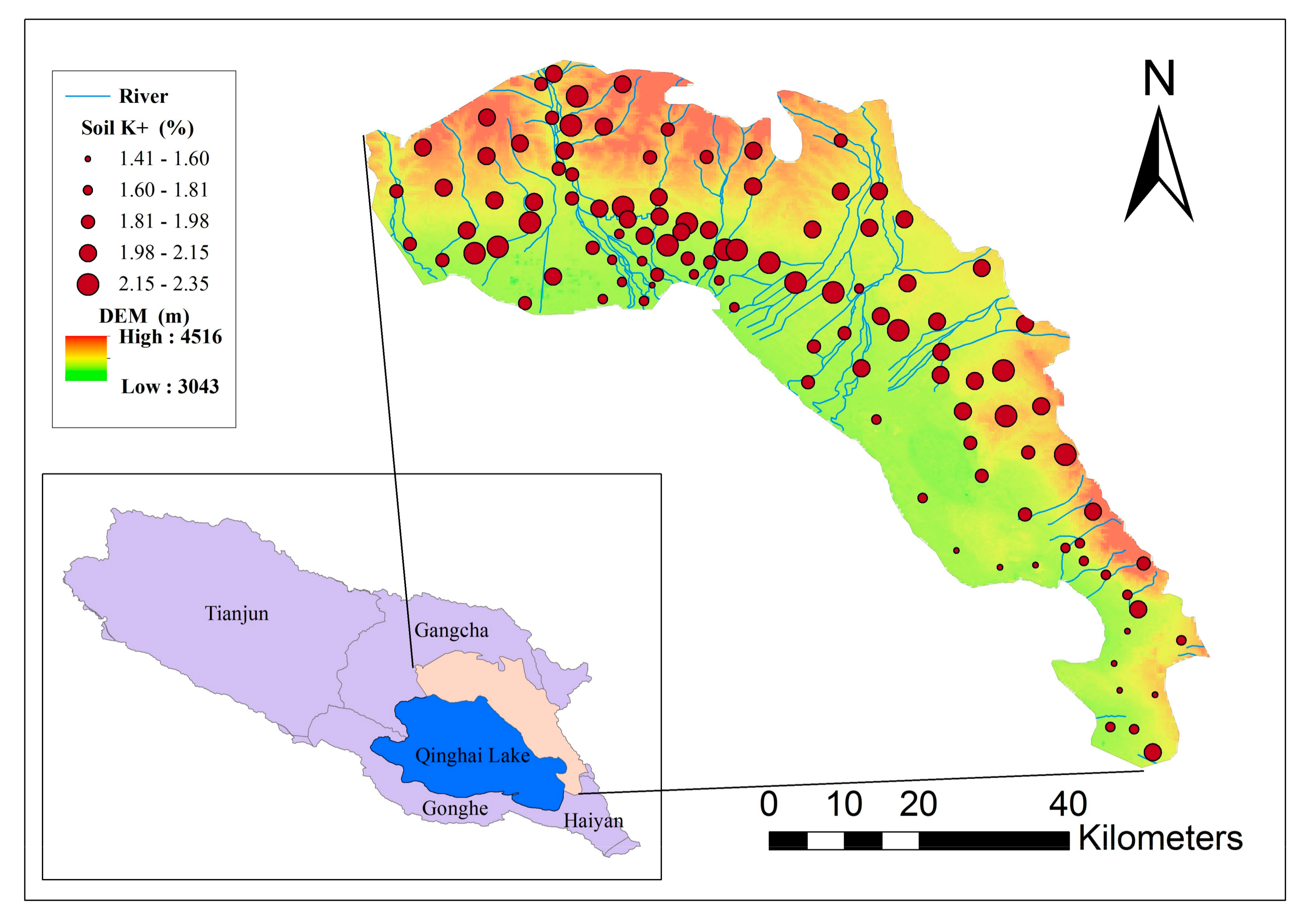 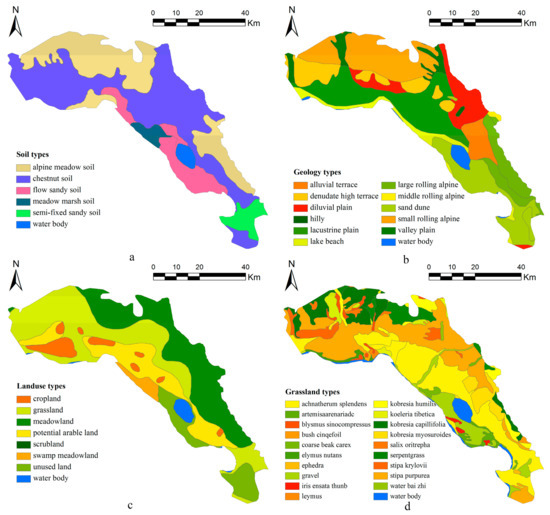 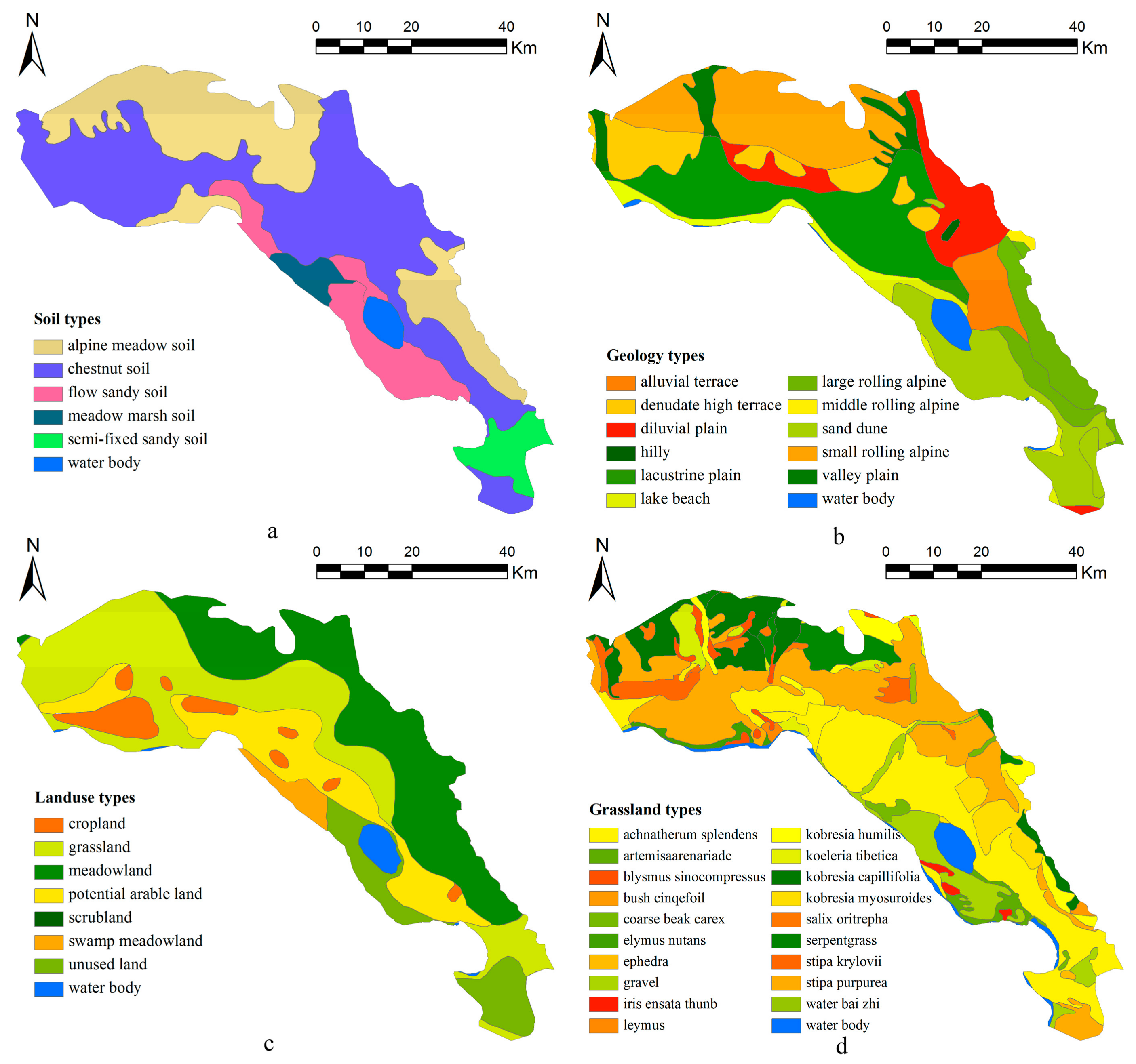 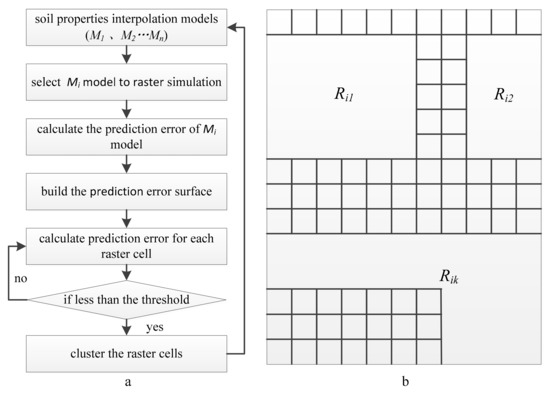 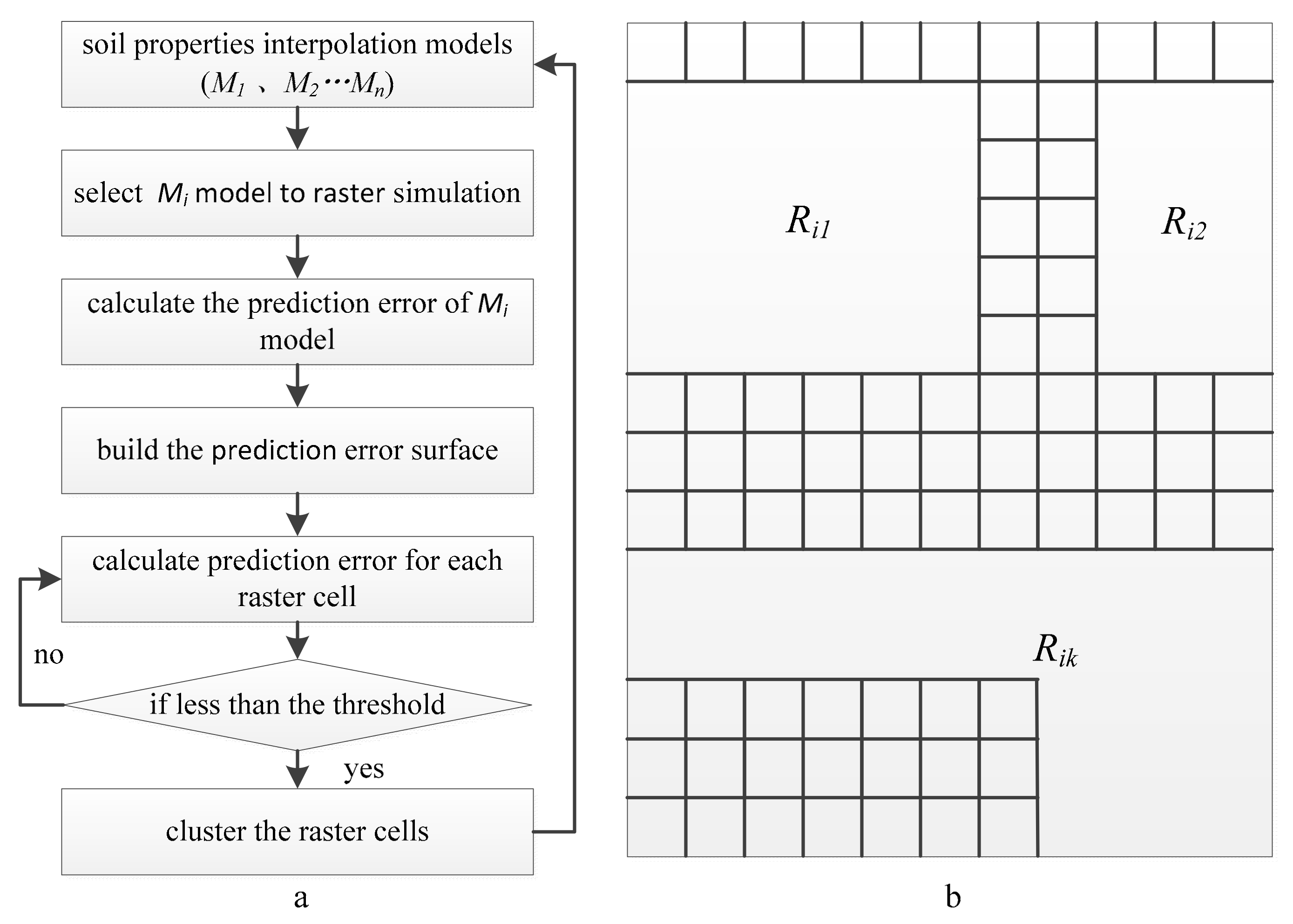 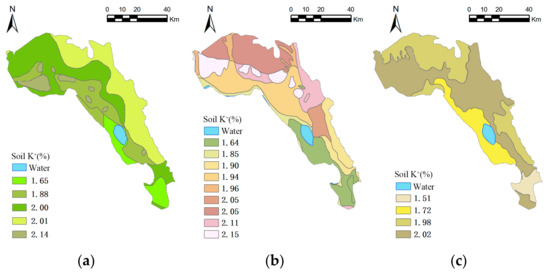 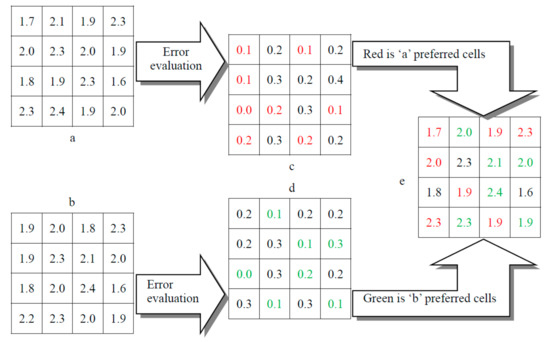 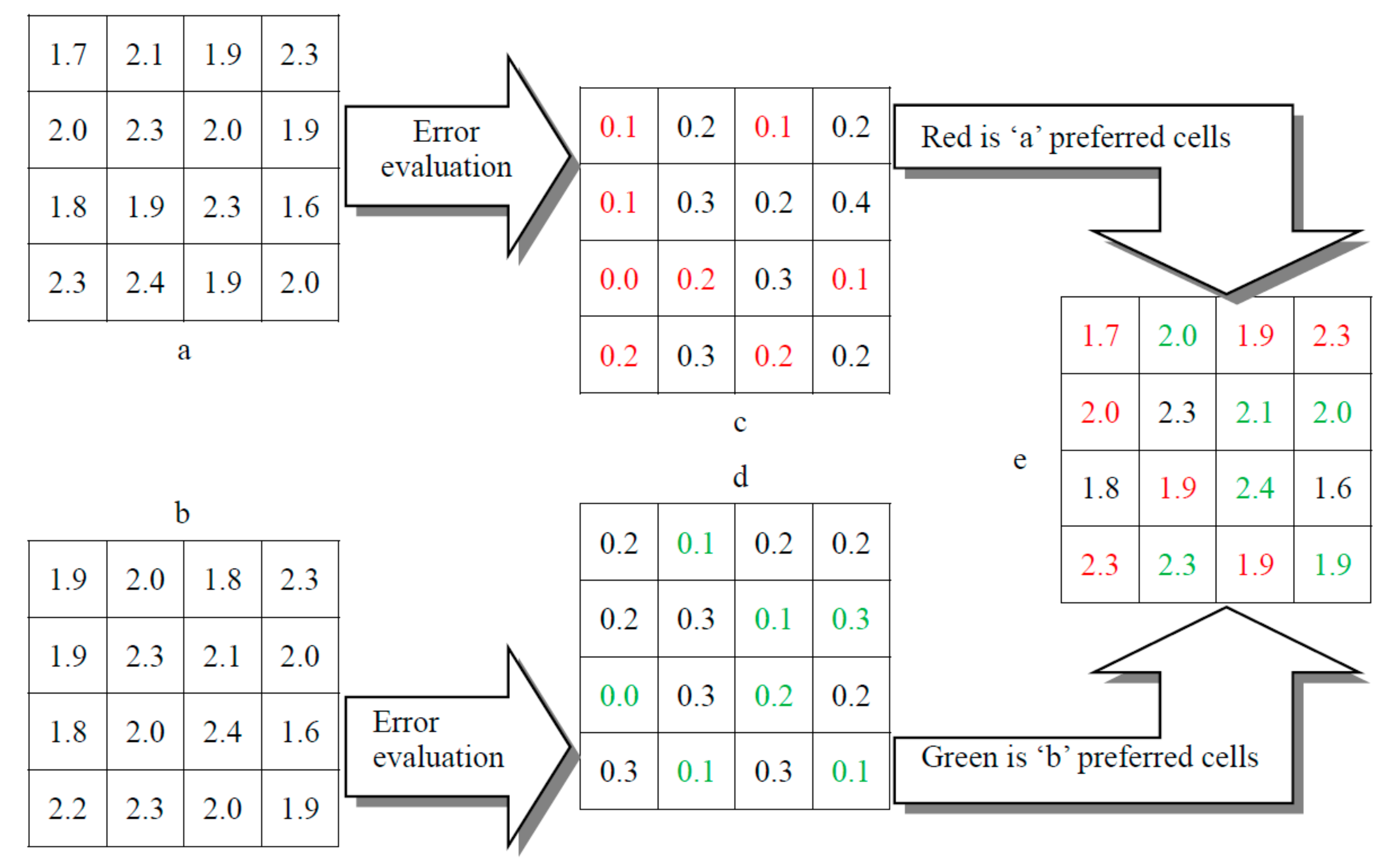 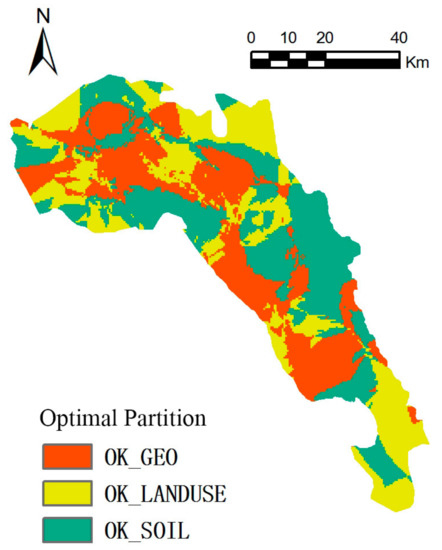 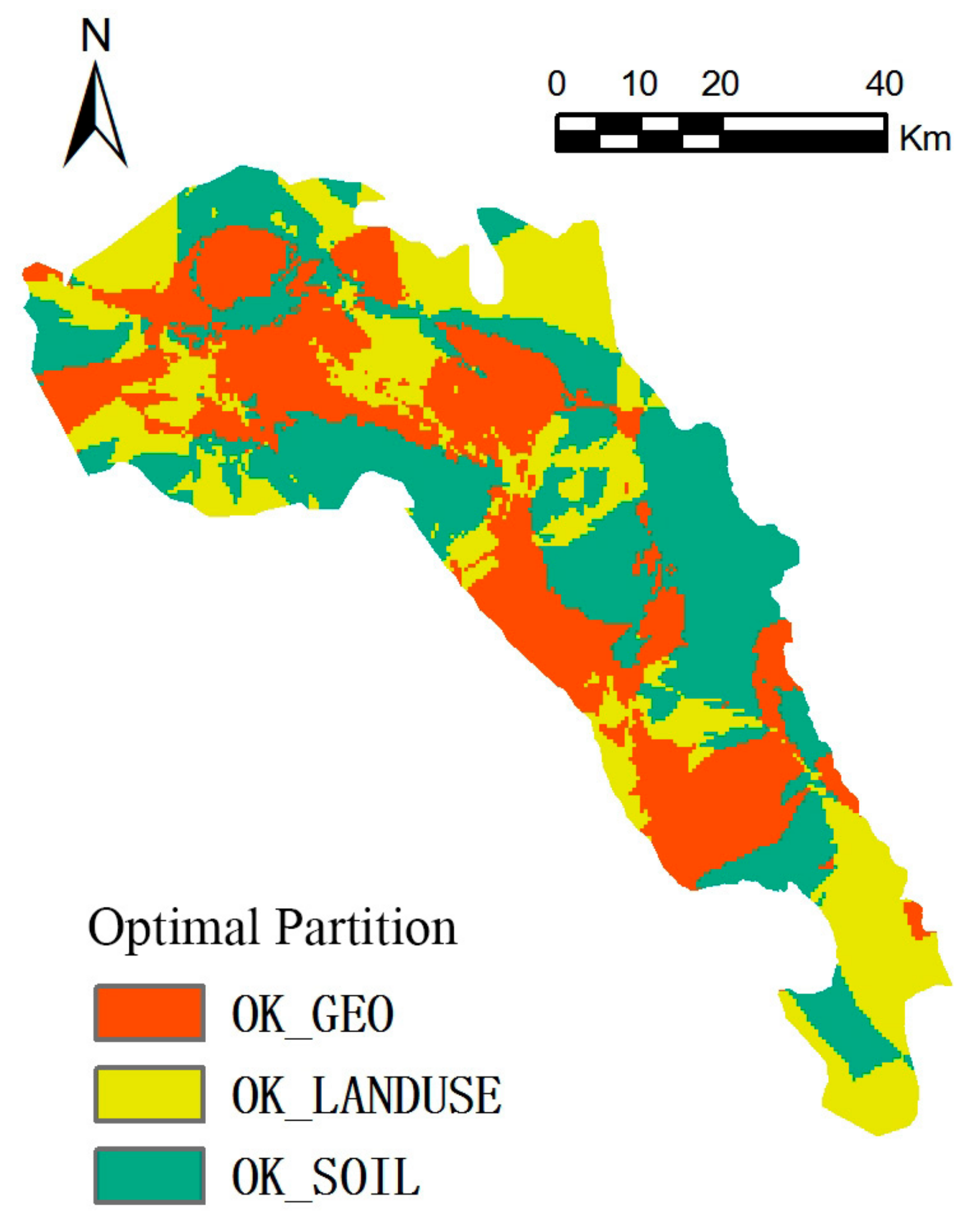 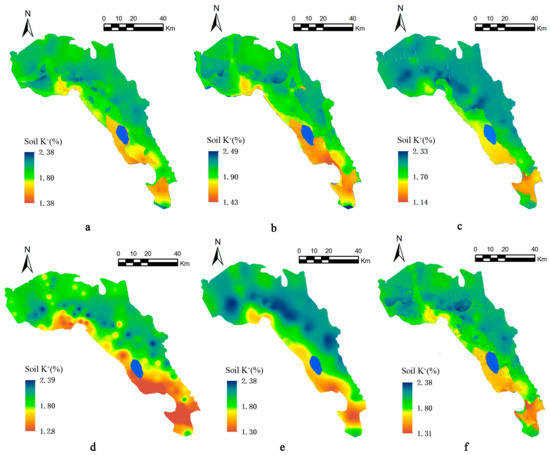 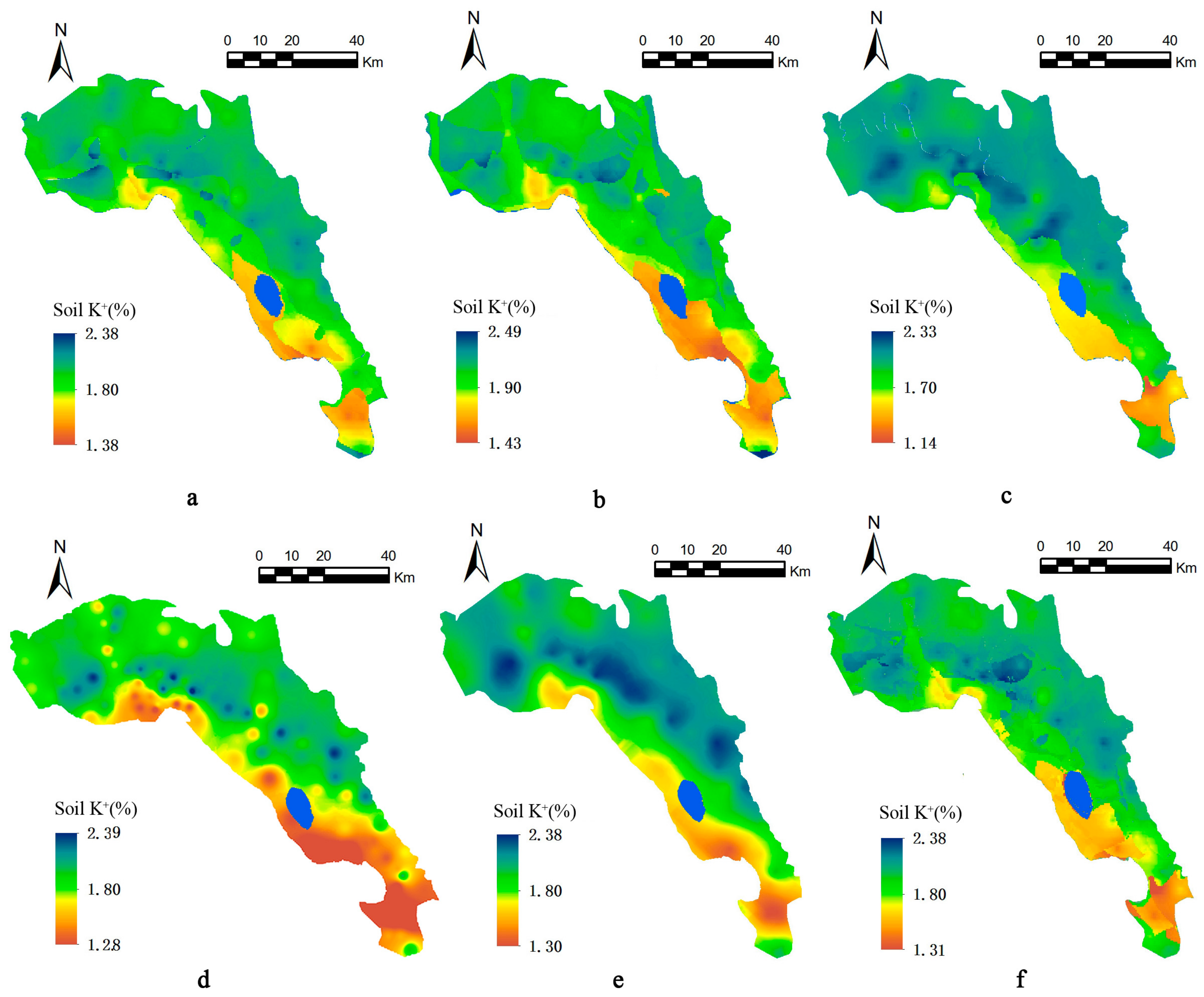