The Elephant in the Room: Informality in Tanzania’s Rural Waterscape
Previous Article in Special Issue

The objective of this study was to identify the areas that are most susceptible to landslide occurrence, and to find the key factors associated with landslides along Jinsha River and its tributaries close to Derong and Deqin County. Thirteen influencing factors, including (a) lithology, (b) slope angle, (c) slope aspect, (d) TWI, (e) curvature, (f) SPI, (g) STI, (h) topographic relief, (i) rainfall, (j) vegetation, (k) NDVI, (l) distance-to-river, (m) and distance-to-fault, were selected as the landslide conditioning factors in landslide susceptibility mapping. These factors were mainly obtained from the field survey, digital elevation model (DEM), and Landsat 4–5 imagery using ArcGIS software. A total of 40 landslides were identified in the study area from field survey and aerial photos’ interpretation. First, the frequency ratio (FR) method was used to clarify the relationship between the landslide occurrence and the influencing factors. Then, the principal component analysis (PCA) was used to eliminate multiple collinearities between the 13 influencing factors and to reduce the dimension of the influencing factors. Subsequently, the factors that were reselected using the PCA were introduced into the logistic regression analysis to produce the landslide susceptibility map. Finally, the receiver operating characteristic (ROC) curve was used to evaluate the accuracy of the logistic regression analysis model. The landslide susceptibility map was divided into the following five classes: very low, low, moderate, high, and very high. The results showed that the ratios of the areas of the five susceptibility classes were 23.14%, 22.49%, 18.00%, 19.08%, and 17.28%, respectively. And the prediction accuracy of the model was 83.4%. The results were also compared with the FR method (79.9%) and the AHP method (76.9%), which meant that the susceptibility model was reasonable. Finally, the key factors of the landslide occurrence were determined based on the above results. Consequently, this study could serve as an effective guide for further land use planning and for the implementation of development. View Full-Text
Keywords: landslide susceptibility mapping; frequency ratio; principal component analysis; logistic regression analysis; receiver operating characteristic curve landslide susceptibility mapping; frequency ratio; principal component analysis; logistic regression analysis; receiver operating characteristic curve
►▼ Show Figures 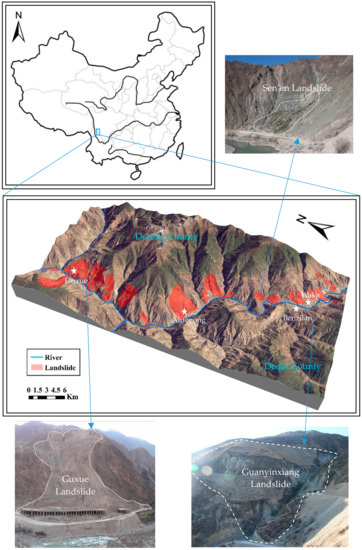