Are the Poor Digitally Left Behind? Indications of Urban Divides Based on Remote Sensing and Twitter Data

Every city is—quoting Plato—divided into two, one city of the poor, the other of the rich. In this study we test whether the economic urban divide is reflected in the digital sphere of cities. Because, especially in dynamically growing cities, ready-to-use comprehensive data sets on the urban poor, as well as on the digital divide, are not existent, we use proxies: we spatially delimit the urban poor using settlement characteristics derived from remote sensing data. The digital divide is targeted by geolocated Twitter data. Based on a sample of eight cities across the globe, we spatially test whether areas of the urban poor are more likely to be digital cold spots. Over the course of time, we analyze whether temporal signatures in poor urban areas differ from formal environments. We find that the economic divide influences digital participation in public life. Less residents of morphological slums are found to be digitally oriented (“are digitally left behind”) as compared to residents of formal settlements. However, among the few twitter users in morphological slums, we find their temporal behavior similar to the twitter users in formal settlements. In general, we conclude this discussion, this study exemplifies that the combination of both heterogeneous data sets allows for extending the capabilities of individual disciplines for research towards urban poverty. View Full-Text
Keywords: urban society; morphological slum; digital divide; social media; Twitter; remote sensing; geoinformation system; human geography urban society; morphological slum; digital divide; social media; Twitter; remote sensing; geoinformation system; human geography
►▼ Show Figures 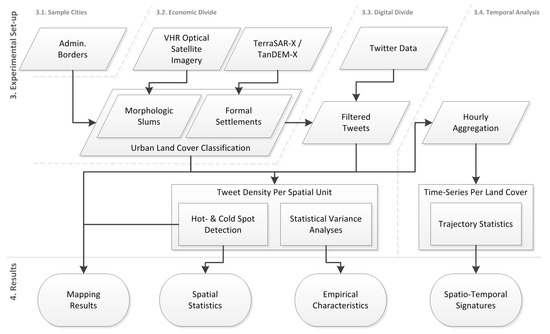