The conventional extracting–transforming–loading (ETL) system is typically operated on a single machine not capable of handling huge volumes of geospatial big data. To deal with the considerable amount of big data in the ETL process, we propose D_ELT (delayed extracting–loading –transforming) by utilizing MapReduce-based parallelization. Among various kinds of big data, we concentrate on geospatial big data generated via sensors using Internet of Things (IoT) technology. In the IoT environment, update latency for sensor big data is typically short and old data are not worth further analysis, so the speed of data preparation is even more significant. We conducted several experiments measuring the overall performance of D_ELT and compared it with both traditional ETL and extracting–loading– transforming (ELT) systems, using different sizes of data and complexity levels for analysis. The experimental results show that D_ELT outperforms the other two approaches, ETL and ELT. In addition, the larger the amount of data or the higher the complexity of the analysis, the greater the parallelization effect of transform in D_ELT, leading to better performance over the traditional ETL and ELT approaches.
Keywords: ETL; ELT; big data; sensor data; IoT; geospatial big data; MapReduce ETL; ELT; big data; sensor data; IoT; geospatial big data; MapReduce

In our previous study [11], we developed a high performance geospatial big data processing system based on Hadoop/MapReduce, named Marmot [17]. In Marmot, spatial analysis is defined as a sequence of RecordSetOperators, where a RecordSet is a collection of records and a RecordSetOperator is a processing element using a RecordSet, similar to a relational operator in Relational Database Management System (RDBMS). A sequence of RecordSetOperators is defined as a Plan, as shown in Figure 1.
In Marmot, a RecordSetOperator is classified as three possible types: RecordSetLoader, RecordSetFunction, or RecordSetConsumer. RecordSetLoader is a non-spatial operator loading source data and transforming it to a RecordSet; RecordSetFunction is a spatial or non-spatial operator taking a RecordSet as source data and producing a new RecordSet as output data; RecordSetConsumer is a non-spatial operator storing a finally created RecordSet as a result of a given spatial analysis outside of Marmot.
To process a given spatial analysis, a developer creates a corresponding Plan by combining spatial operators and non-spatial operators and injects the Plan into Marmot. Marmot processes each RecordSetOperator one by one and automatically transforms the given Plan to map and reduce jobs, as shown in Figure 2.
While parsing a given Plan, when Marmot meets a RecordSetFunction that can be separated into mapping and reducing operators (e.g., ReduceByGroupKey), as shown in Figure 2a, Marmot decomposes the RecordSetFunction into the mapping operator and reducing operator, and eventually transforms the Plan into MapReduce jobs consisting of map and reduce phases, as shown in Figure 2b. During this transformation, Marmot controls the number of MapReduce phases in a way to achieve better performance by decreasing the overhead of mapping and reducing. To describe how Marmot handles such processes in detail, an example of spatial analysis to retrieve subway stations in a city is shown in Figure 3 and Figure 4.
Figure 3 is a Marmot code for an example of spatial analysis. The analysis is represented as a Plan consisting of five RecordSetOperators: Load, Update, SpatialJoin, ReduceByGroupKey, and StoreAsCsv. As shown in Figure 4, using the Load operator, Marmot reads the boundaries of each subway station and computes their center coordinates. The calculated center points are then utilized as the representative locations of each subway station via the Update operator. For each subway station, using the SpatialJoin operator, Marmot identifies the city that is the center point of the subway station. Finally, the number of subway stations per city is calculated via the ReduceByGroupKey operator and the results are stored in a CSV file named “result” via the StoreAsCsv operator.
During the process of transforming the Plan to a sequence of MapReduce jobs, ReduceByGroupKey is decomposed into GroupBy and Reduce as a mapping operator and a reducing operator, respectively. Accordingly, Load, Update, SpatialJoin, and GroupBy are executed during the Map phase; Reduce and StoreAsCsv, during the Reduce phase.

This section explains our evaluation of the improvement in performance achieved by our proposed approach, D_ELT. In addition, the scalability of three different approaches (traditional ETL, ELT, and D_ELT) were measured and compared by varying data size and levels of analysis complexity.

Our experiments were conducted on the four nodes of a Hadoop cluster. Each node was a desktop computer with a 4.0 GHZ Intel 4 core i7 CPU, a 32 GB main memory, and a 4 TB disk. The operating system was CentOS 6.9 and the Hadoop version was Hortonworks HDP 2.6.1.0 with Ambari 2.5.0.3. PostgreSQL 9.5 was used for the database management system along with Oracle JDK 1.8. The 2.7.3 version of MapReduce2 was used.
The test data used in the experiment were DTG data installed in vehicles, which record the driving record in real time. The structure of the data consisted of timestamp, vehicle number, daily mileage, accumulated mileage, speed, acceleration, RPM, brake, x_position, y_position, and angle. The data were classified into three different sizes: small, 9.9GB; medium, 19.8 GB; and large, 29.8 GB, as shown in Table 1. For the geospatial big data platform, we used our developed system Marmot, as explained in Section 2.

In this experiment, we compared the data analysis time of ETL, ELT, and our proposed D_ELT, and the scalability of each approach based on the different data size. Additionally, this experiment also included optimized D_ELT, D_ELT_Opt, conducting data analysis by filtering and using only the required data. In order to see the variation in performance according to the different complexity levels of analysis, we utilized three analyses—Count, GroupBy, and SpatialJoin—for low, middle, and high-level complex analysis, respectively. The overall results from this experiment are presented in Table 3.
As shown in Figure 5 in Section 3, the total time for data analysis in ETL includes only the analysis, which is conducted in a parallel distributed way using MapReduce. In the case of ELT, once the data preparation is completed, the analysis will be conducted in the same way as for ETL. In the cases of D_ELT and optimized D_ELT, the total time spent on data analysis is the time required to execute transform and analysis in a parallel distributed way using MapReduce.

There are two conventional methods—ETL and ELT. The traditional ETL method does not use the distributed/parallel method during data pre-processing, causing problems especially when the volume of data to be pre-processed is large. The ELT method improves traditional ETL methods to speed up data pre-processing using the distributed/parallel method. Our proposed D_ELT method reduces overhead in data pre-processing. In D_ELT, the transformation task is piggybacked onto the analysis task and both tasks are performed together using the same MapReduce. This way allows one to conduct the analysis immediately without storing transform results and also excludes unnecessary transformations that are not utilized in the analysis.
Compared to existing methods, however, the D_ELT method significantly reduces the data preparation time, but has the disadvantage in the following cases. First, the case that the same kind of analysis must be conducted repetitively. For example, the D_ELT method results in a 1382-second reduction (large data, Table 2) in data preparation time compared to that of the conventional ETL method, but 103 seconds is added (large data, SpatialJoin, Table 3) every time an analysis is conducted. Therefore, the greater the number of conducting analyses, the more inefficient D_ELT is compared to traditional methods. In the example above, the D_ELT method is more inefficient than the existing method when the same analysis is conducted more than 14 times in succession. Second, in the case that a large amount of input data is invalid, a large amount of data can be removed as a result of the transform. In D_ELT, the transformation task is piggybacked every time an analysis task is executed, a large amount of invalid data is repeatedly read, resulting in unnecessary I/O and computation burden. Finally, the method proposed in this paper does not consider real-time applications. However, it provides the advantage that required analysis results can be obtained relatively more quickly than other conventional methods.

This paper presents our proposed D_ELT approach to efficiently transform and analyze data, thereby making it usable for a large amount of sensor big data, especially geospatial big data. Based on the experimental results, we made several observations as follows. First, D_ELT outperforms ETL and ELT during data preparation. Second, D_ELT shows performance degradation during data analysis. However, the higher the complexity of the analysis, the smaller the performance degradation, resulting in overall improved performance compared to ETL or ELT. Finally, in the case of simple analysis increasing the scope of optimization, optimized D_ELT outperforms ELT. In the future, we plan to further increase the overall performance of our developed system including D_ELT and Marmot by investigating the spatial index, to better support spatial queries in dealing with geospatial big data.

K.-W.L. designed and implemented the D_ELT; K.-W.L. and J.J. conducted the testing of D_ELT and analyzed the experiment results; J.J. wrote and K.-W.L. revised the manuscript.

This research was supported by the MOLIT (The Ministry of Land, Infrastructure and Transport), Korea, under the national spatial information research program supervised by the KAIA(Korea Agency for Infrastructure Technology Advancement) (19NSIP-B081011-06).

This research, ‘Geospatial Big data Management, Analysis and Service Platform Technology Development’, was supported by the MOLIT (The Ministry of Land, Infrastructure and Transport), Korea, under the national spatial information research program supervised by the KAIA(Korea Agency for Infrastructure Technology Advancement) (19NSIP-B081011-06). 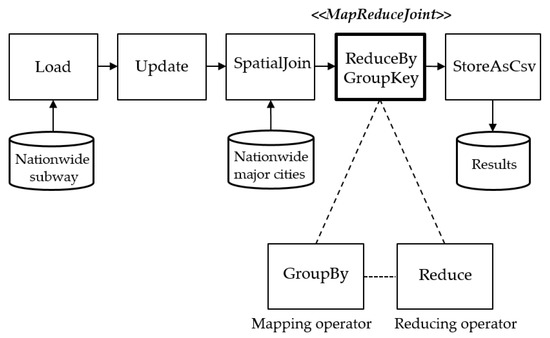 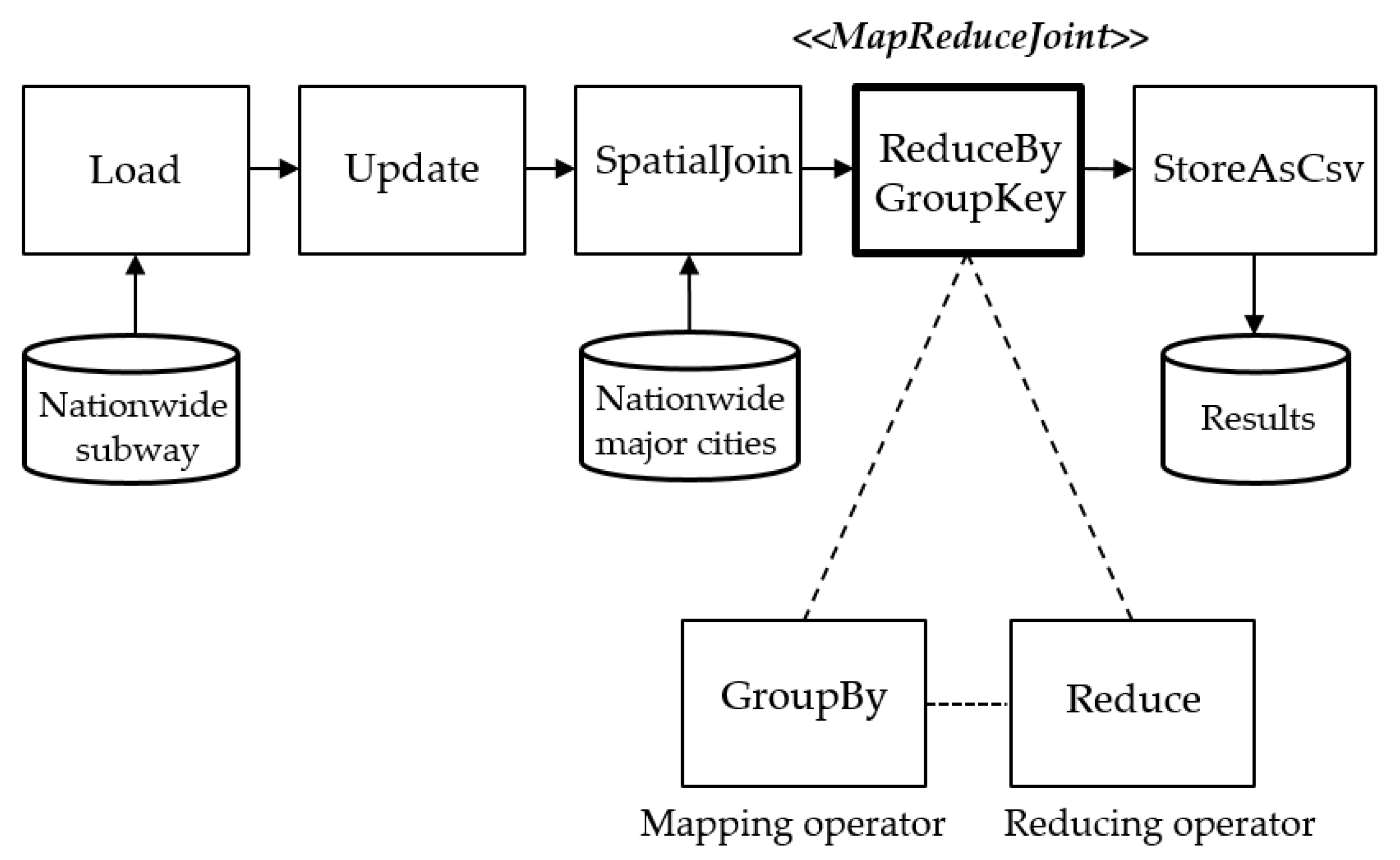 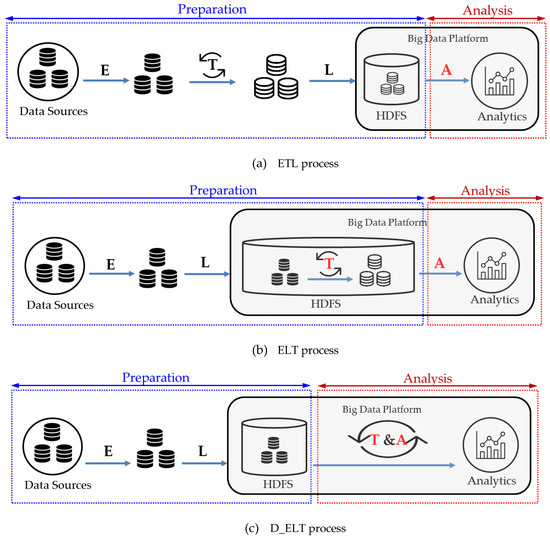 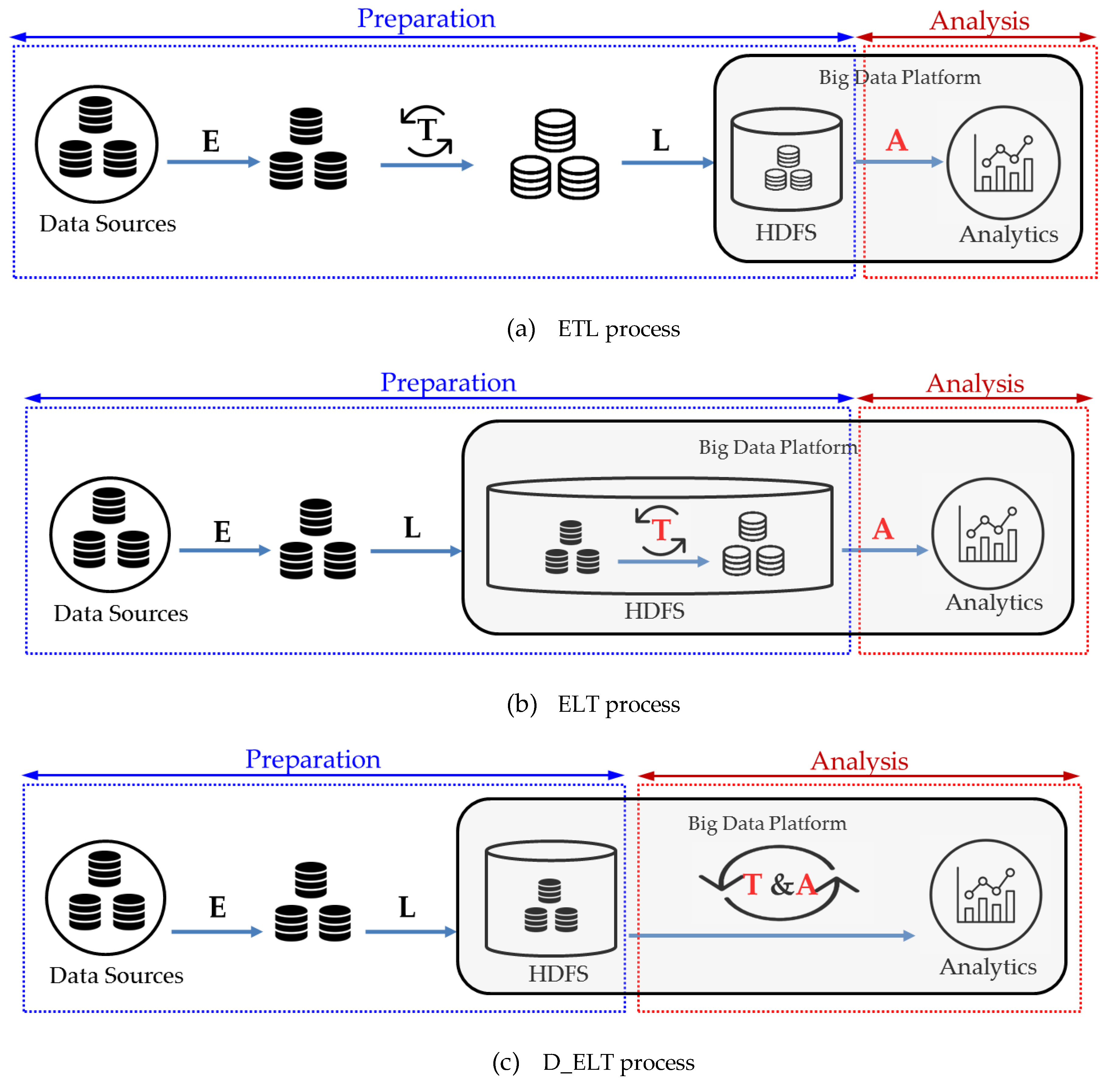 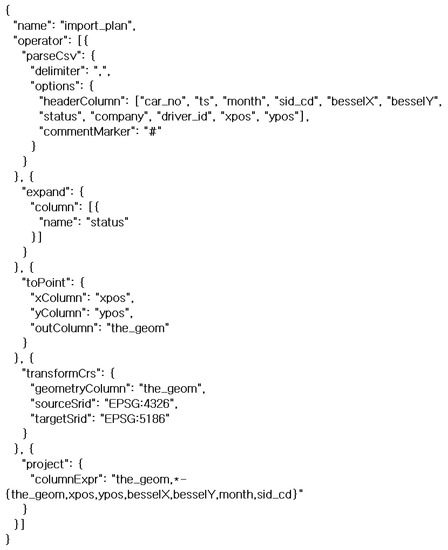 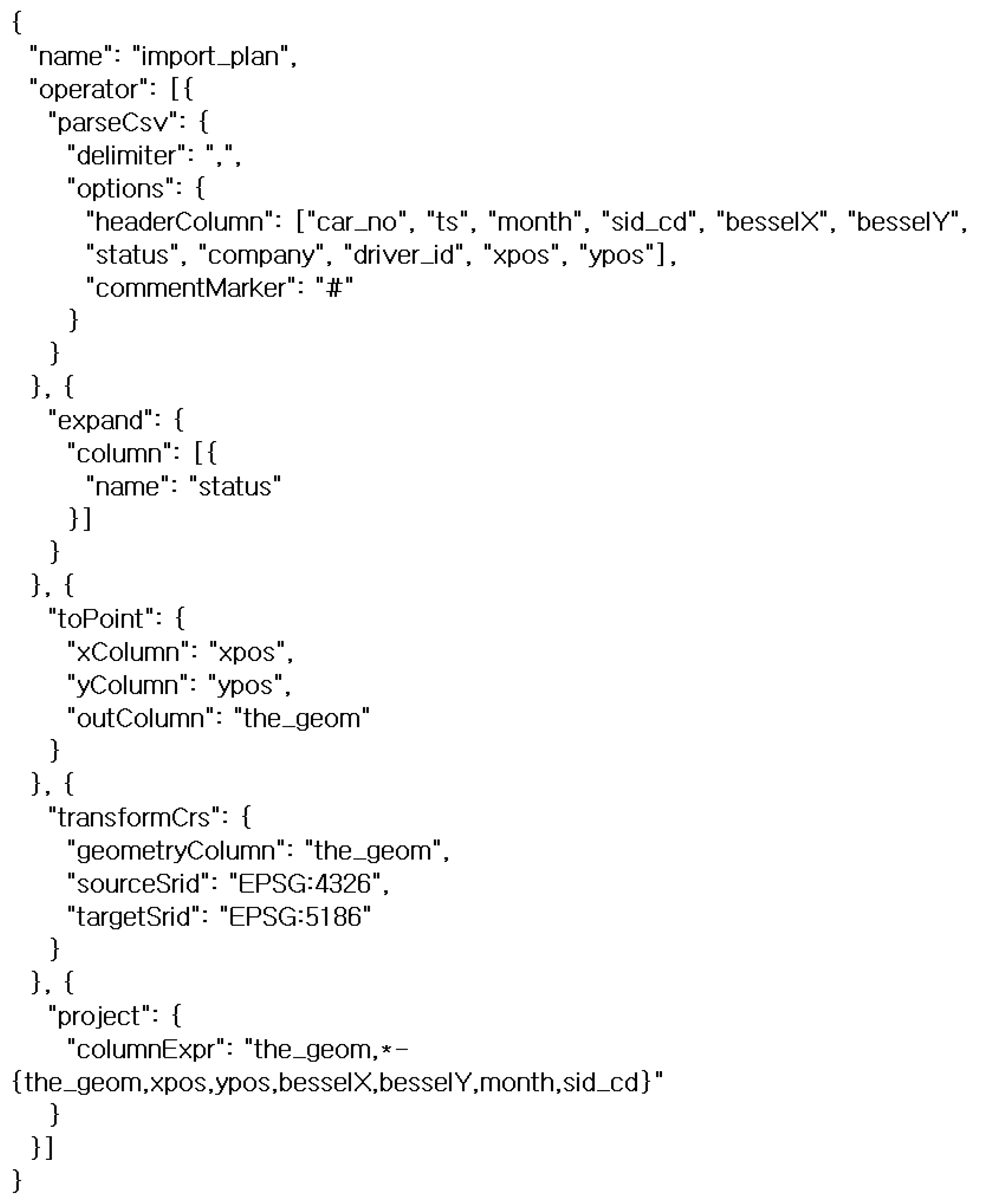 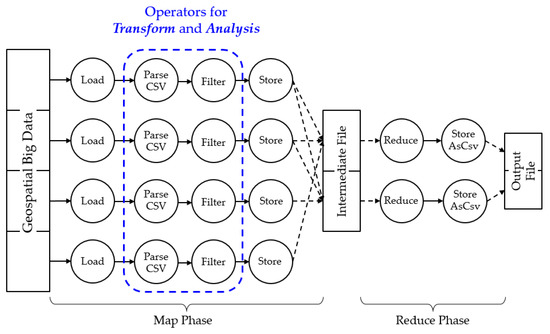 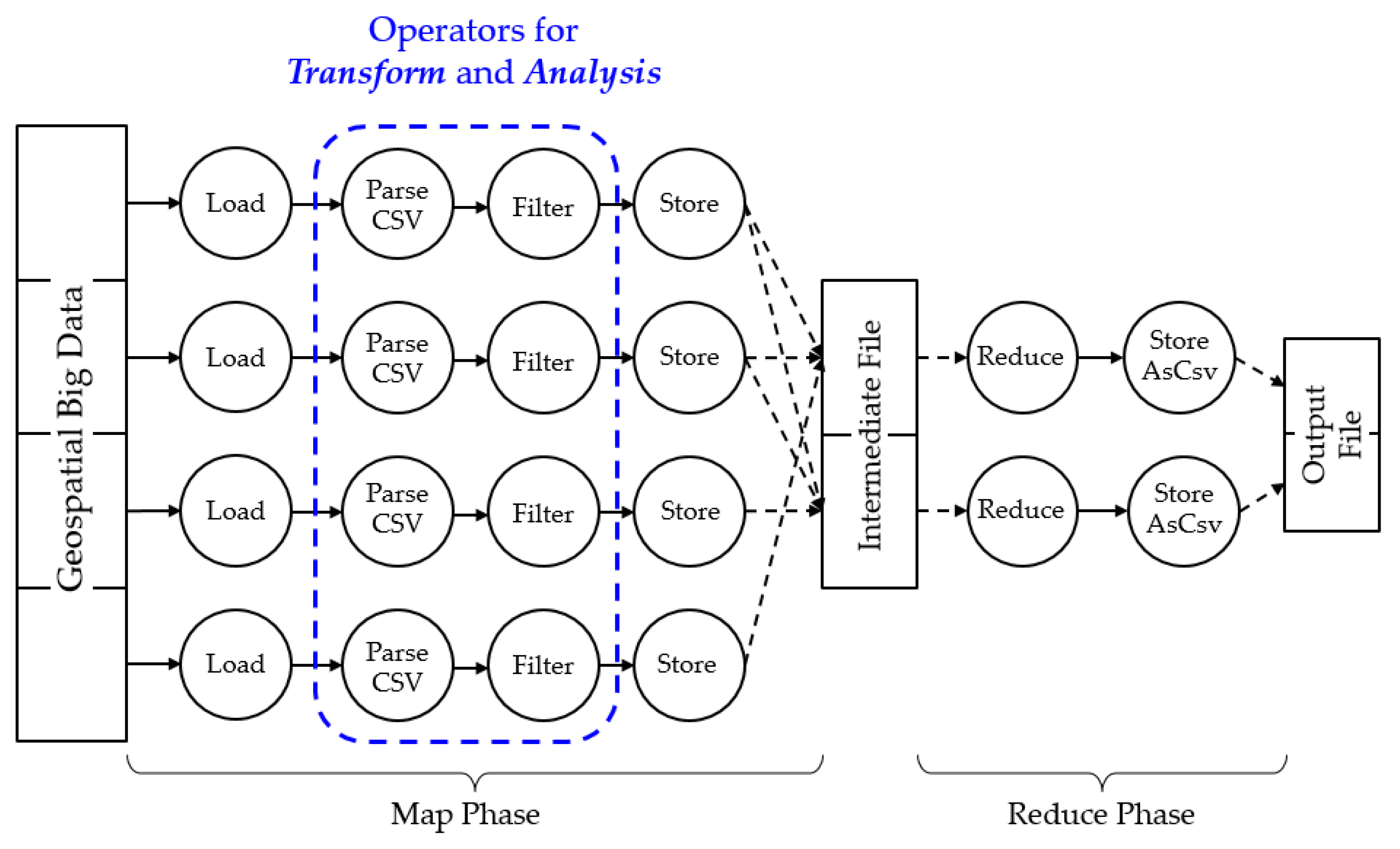 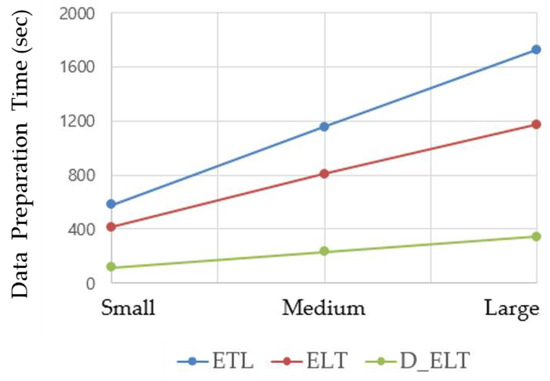 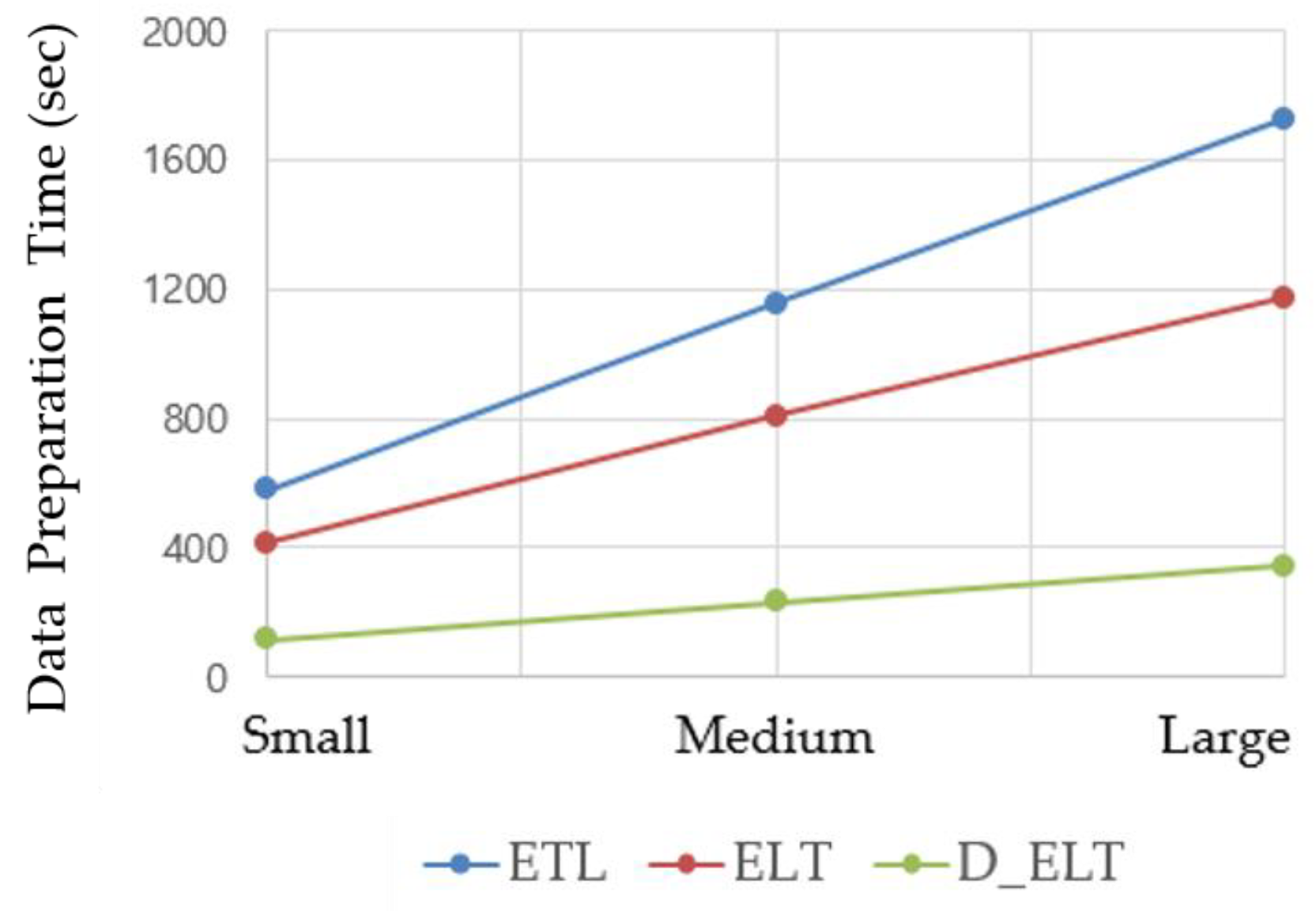 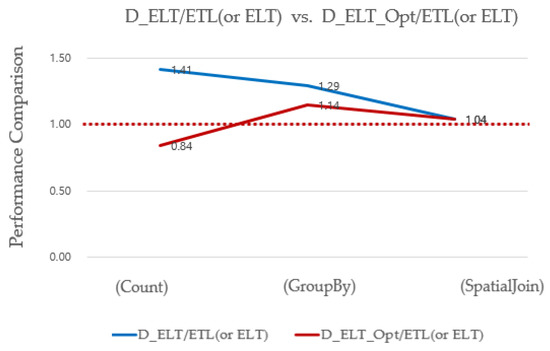 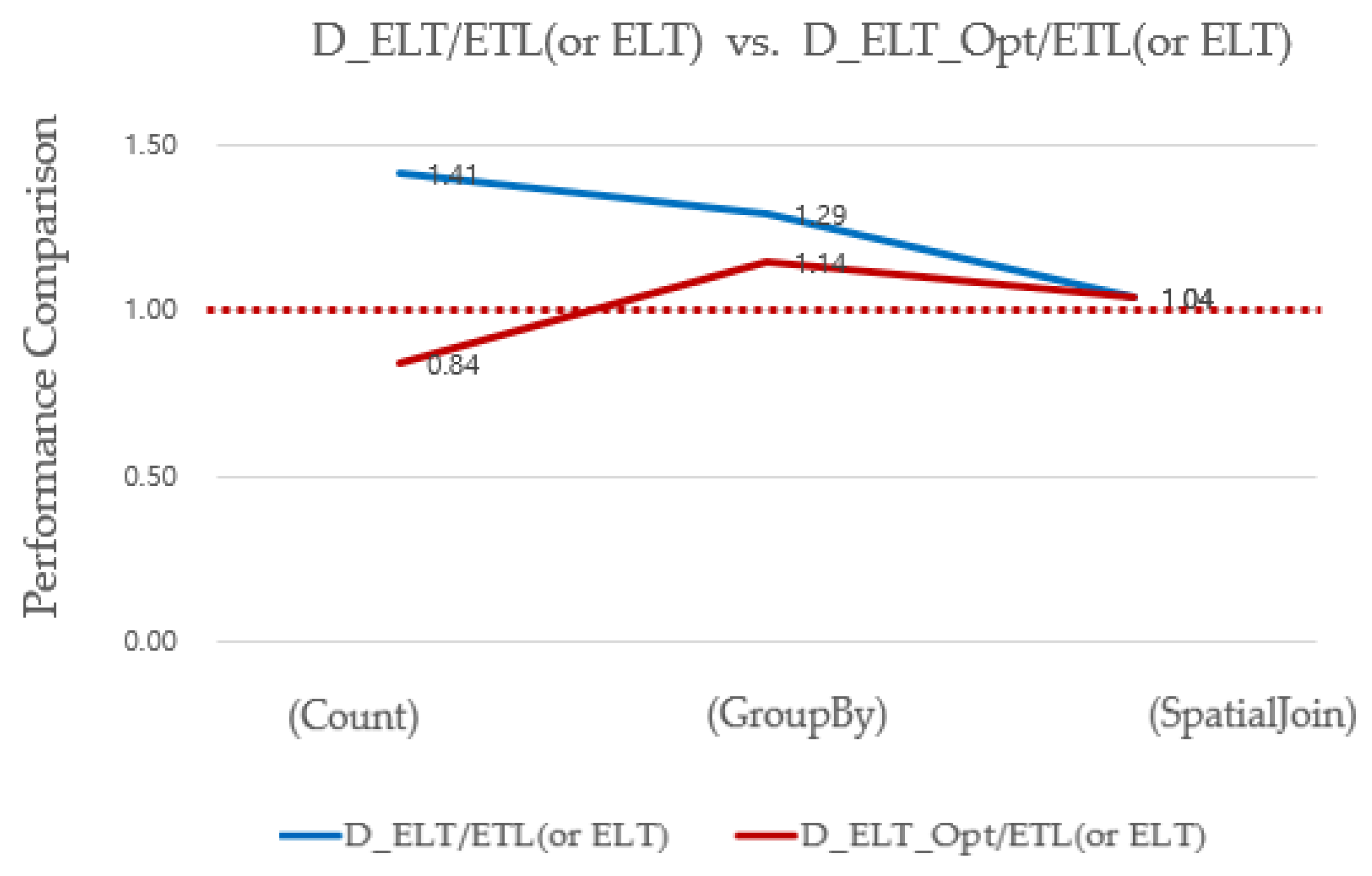 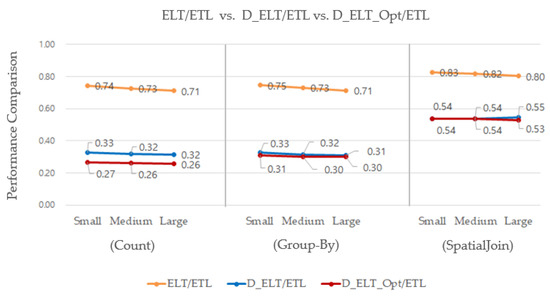 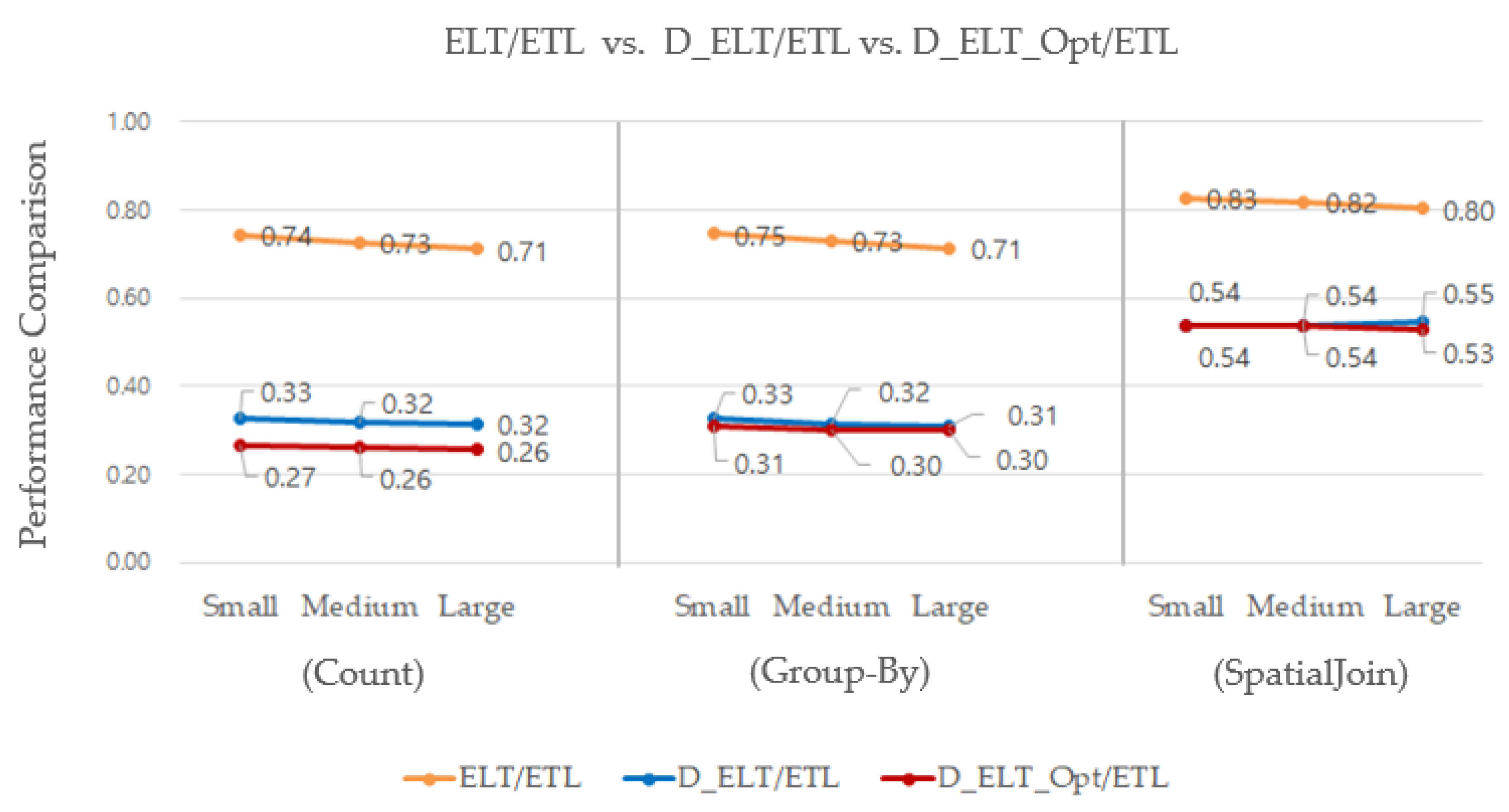