Social Media Use in American Counties: Geography and Determinants

Analysis of Tourism Hotspot Behaviour Based on Geolocated Travel Blog Data: The Case of Qyer

We contribute a system design and a generalized formal methodology to segment tourists based on their geolocated blogging behaviour according to their interests in identified tourist hotspots. Thus, it is possible to identify and target groups that are possibly interested in alternative destinations to relieve overtourism. A pilot application in a case study of Chinese travel in Switzerland by analysing Qyer travel blog data demonstrates the potential of our method. Accordingly, we contribute four conclusions supported by empirical data. First, our method can enable discovery of plausible geographical distributions of tourist hotspots, which validates the plausibility of the data and its collection. Second, our method discovered statistically significant stochastic dependencies that meaningfully differentiate the observed user base, which demonstrates its value for segmentation. Furthermore, the case study contributes two practical insights for tourism management. Third, Chinese independent travellers, which are the main target group of Qyer, are mainly interested in the discovered travel hotspots, similar to tourists on packaged tours, but also show interest in alternative places. Fourth, the proposed user segmentation revealed two clusters based on users’ social media activity level. For tourism research, users within the second cluster are of interest, which are defined by two segmentation attributes: they blogged about more than just one location, and they have followers. These tourists are significantly more likely to be interested in alternative destinations out of the hotspot axis. Knowing this can help define a target group for marketing activities to promote alternative destinations. View Full-Text
Keywords: social media mining; overtourism; tourist hotspots; tourist segmentation; geolocated data social media mining; overtourism; tourist hotspots; tourist segmentation; geolocated data
►▼ Show Figures 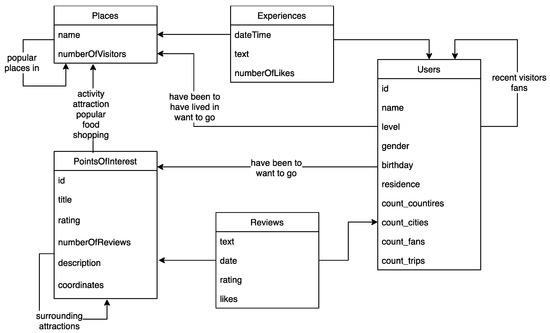