Monitoring 2.0: Update on the Halyomorpha halys Invasion of Trentino

“BugMap” is a citizen science mobile application that provides a platform for amateur and expert scientists to report sightings of two invasive insect pests, the tiger mosquito Aedes albopictus Skuse (Diptera: Culicidae) and the brown marmorated stink bug, Halyomorpha halys Stål (Hemiptera: Pentatomidae). The latter is a notorious pest of fruit trees, vegetables, ornamentals, and row crops, inflicting severe agricultural and ecological disturbances in invaded areas. Our approach consists of coupling traditional monitoring with citizen science to uncover H. halys invasion in Trentino. The project was initiated in 2016 and the first results were reported in 2018. Here, we revisit our initiative four years after its adoption and unravel new information related to the invader dispersal and overwintering capacity. We found that our previous model predicted the current distribution of H. halys in Trentino with an accuracy of 72.5%. A new MaxEnt model was generated by pooling all reports received so far, providing a clearer perspective on areas at risk of stink bug establishment in this north Italian region. The information herein presented is of immediate importance for enhancing monitoring strategies of this pest and for refining its integrated management tactics.
Keywords: citizen science; northern Italy; invasive insect pests; crowdsourcing; long-term monitoring; brown marmorated stink bug citizen science; northern Italy; invasive insect pests; crowdsourcing; long-term monitoring; brown marmorated stink bug

Disentangling a species’ invasion requires extensive sampling and surveys across large spatial and temporal scales, which can be challenging and costly for a small group of scientists trying to track invasive species. Citizen science is a potentially powerful means to overcome some of these challenges, whereby it enlists the public in collecting a large amount of data across an array of habitats and locations [1]. Another major strength of citizen science is that it can aid in raising public awareness regarding local ecological issues and promote a more active scientific citizenship [2]. Catalyzed by access to technology and the internet, citizen science is on the rise, with thousands of projects worldwide [3], yet, few involve agricultural pests [4]. Numerous projects have been initiated in the USA and UK to monitor the species richness of “Lady Beetles” [5,6,7]. Another example is the Monarch Larva Monitoring Project (MLMP), a trinational long-term project concerning the monarch butterfly, Danaus plexippus that involves volunteers from across the United States, Canada, and Mexico in monarch research [8].
The brown marmorated stink bug Halyomorpha halys is an invasive pest that feeds on over 300 plants including economically important fruit trees, vegetables, and row crops as well as ornamentals [9,10]. This insect is native to Eastern Asia, but its occupied range has expanded outside of its areas of origin, probably due to global anthropogenic forcing [11], thus spreading through most of the United States, Canada, and numerous European and Eurasian countries [12]. In the Southern Hemisphere, it has been recorded in Chile [13] and intercepted many times in Australia [14] and New Zealand [15]. Feeding by H. halys results in deformed, symptomatic produce with indents on the surface and corky spots in the flesh, hampering marketability [16]. Severe crop losses have been registered in the USA and Europe, reaching millions of dollars per year [17] as well as serious nuisance problems due to large H. halys aggregations in man-made structures [18]. Some of the most acute agricultural and nuisance problems were recorded in Italy [19,20]. Aside from its polyphagy, H. halys is capable of long-distance flight [21] and hitchhiking on both animate and inanimate objects alike, making it a harder to control and monitor landscape level pest.
About four years ago, we attempted to couple traditional monitoring strategies with a citizen science approach, whereby students, farmers, technicians, and everyday citizens could report sightings of H. halys via ‘BugMap’, a freely available mobile application. The collected data were then employed to forecast its predicted distribution and to identify areas at risk in Trentino, instructing technical monitoring and management efforts. This tactic permitted the uncovering of H. halys seasonal invasion dynamics, phenological patterns, and potential management methods in this North Italian region. Monitoring 2.0: coupling traditional monitoring and citizens science, has thus proved effective in unraveling H. halys invasion in Trentino [22]. The objective of this update is to utilize the newly recorded data points to verify the accuracy of our previously calculated model on the projected distribution of the invasive bug in Trentino. We also reveal new information regarding the seasonal activity of the bug, namely its overwintering capacity in areas of high economic interest. We also aimed to verify and highlight the far-reaching capacity of citizen science in such an initiative, spanning all Italian territories.

Our study focuses on Trentino, North Eastern Italy, which is characterized by a continental climate, covering 6214 km2 south of the Alps. The BugMap team has been generally advertising for the mobile application across the whole of Italy, with special attention to Trentino. Several social media platforms were used to actively disseminate information on the pest and the application, thus engaging followers year-round. This initiative was further circulated in several scientific and socio-technical events that took place in museums as well as national and international conferences (Table 1).

Since the initiation of this mobile application, the BugMap team, which includes technicians, computer scientists, science communicators, modelers, and entomologists, has been receiving citizen feedback and constantly working toward enhancing citizen involvement. Even though the steps to follow are the same as the ones described in Malek et al. [22], registering an H. halys sighting was made easier by refining map visualization, image upload, and ameliorating overall user-experience.
Recorded sightings between February 21, 2018 and October 1, 2019 were seasonally classified according to the North Italian climate. In Trentino, 799 valid BugMap reports were obtained during that period, and were projected in QGIS (version 2.18.16) on the H. halys distribution model that we previously generated. These new 799 records of the species were used to validate the first model, developed using 144 records from the previous survey.
To generate the BugMap reports’ map of Italy and to compute the new MaxEnt model, we utilized all valid datapoints recorded thus far, spanning from May 2016 to October 2019.

Using the same environmental predictors applied in Malek et al. [22] such as digital elevation models, land-use, hydrography, road networks, and forest tracks, along with all valid BugMap reports obtained so far, we modeled H. halys distribution in MaxEnt (v. 3.3.3) and ran the Jackknife test to determine the variables that reduced the model reliability when omitted. The latter software attempts to estimate a probability distribution of species occurrence that is closest to uniform while still subject to environmental constraints [23].
In order to increase the model performance, we followed the recommendations of Fourcade et al. [24], who suggested undertaking a systematic sampling of the records when the data are biased according to travel time. Performing a systematic sampling over a 500 m grid was found to be the best method to account for BugMap sampling bias [22], and we again randomly selected a single point for each mesh of the grid. In the end, we ran the model using a total of 699 presence locations: 490 points were used to train the model and 209 (30%) for testing.
In order to determine the optimal cut-off value, we followed the ROC (receiver operating characteristic) plot-based approach, allowing us to identify the point that maximized the sensitivity of our model against 1-specificity [23,25,26].

The logistic output of the previously generated map from MaxEnt was then classified according to the cut-off value into two classes: unsuitable habitat below 0.26 of the logistic output, and suitable habitat above that value. Projecting the new BugMap reports on the old model, we found that it predicted the distribution of the bug in Trentino with 72.5% accuracy, with 580 out of 799 new reports falling in the projected distribution range (Figure 1).

Halyomorpha halys was reported all year round from most urban and agricultural areas of Trentino. In spring 2018 and 2019, 146 reports were recorded from Trentino (Figure 2), reflecting a seven-fold increase when compared with reports recorded in 2016 and 2017. During the summer of 2016 and 2017, 49 reports were registered, compared with 260 reports in 2018 and 2019. Summer and autumn seem to be the seasons when both citizens and technicians recorded the most H. halys sightings, with 32.5% and 40.9% of reports, respectively. During spring and summer, most reports were registered from the highly suitable Val d’Adige, while in autumn, an upsurge of BugMap reports was noted from Val di Non, an economically important agricultural area. Scattered sightings of the bug were registered during winter from all urban and agricultural valleys of the North Italian region.

Halyomorpha halys reports have been increasing throughout the Italian territories, with 259 new recordings obtained from Italian regions other than Trentino in 2019, compared with 62 recorded reports in 2017 and 2018 (Figure 3). Adjoining North Italian regions such as Veneto and Lombardy have seen an upsurge in recordings of the invasive stink bug when compared with the previous years. Valid BugMap reports were also registered for the first time in Umbria, Marche, Abruzzo, Molise, Puglia, Calabria, Sicily, and Sardinia. Sporadic reports have also occurred from nearby countries such as Switzerland, Slovenia, Croatia, and Hungary.

The occurrence data collected on our platform were treated for travel-time bias by systematic sampling of random points over a 500 m grid. For training the model, 490 points were used while 209 records were used for testing it, the model had an AUC for training data of 0.956 and the test data was 0.943. The 2018 and 2019 suitability maps are shown below (Figure 4). The Jackknife test for assessing variable contribution revealed that the parameters that most affected the dispersal of the bug were the digital terrain model, land use, and distance from houses and from streets.

First and foremost, the authors wish to thank all of the participating citizens, without them this work would not have been possible. The authors wish to thank Marco Deromedi and all Fondazione Edmund Mach technicians for their assistance in the field work. We also express our sincere gratitude to FEM bioinformaticians for the constant improvement and maintenance of the BugMap application. 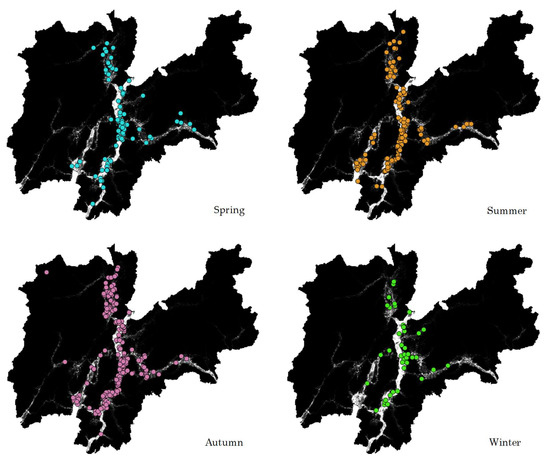 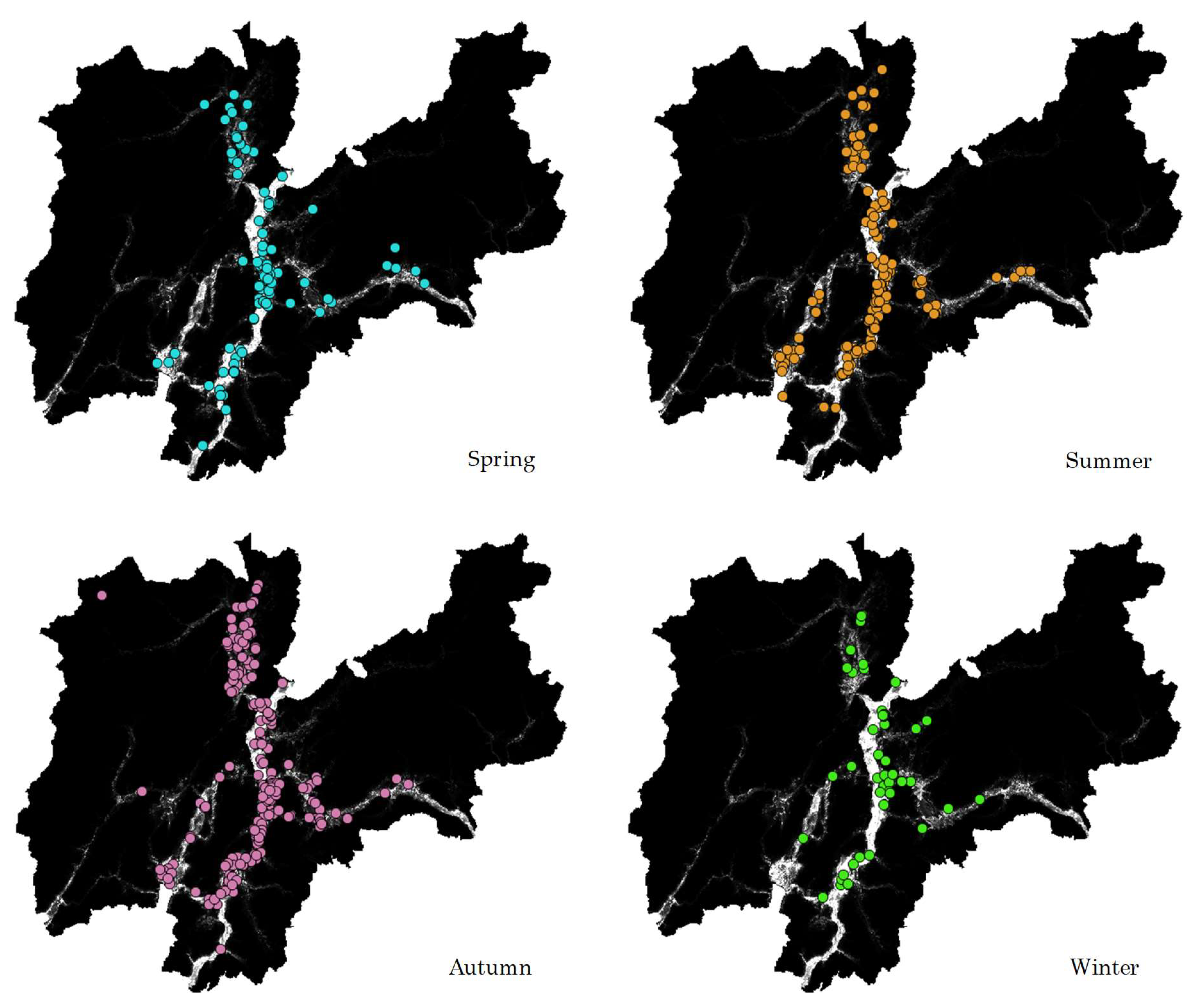 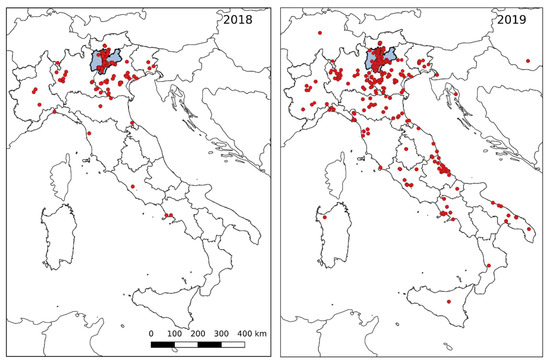 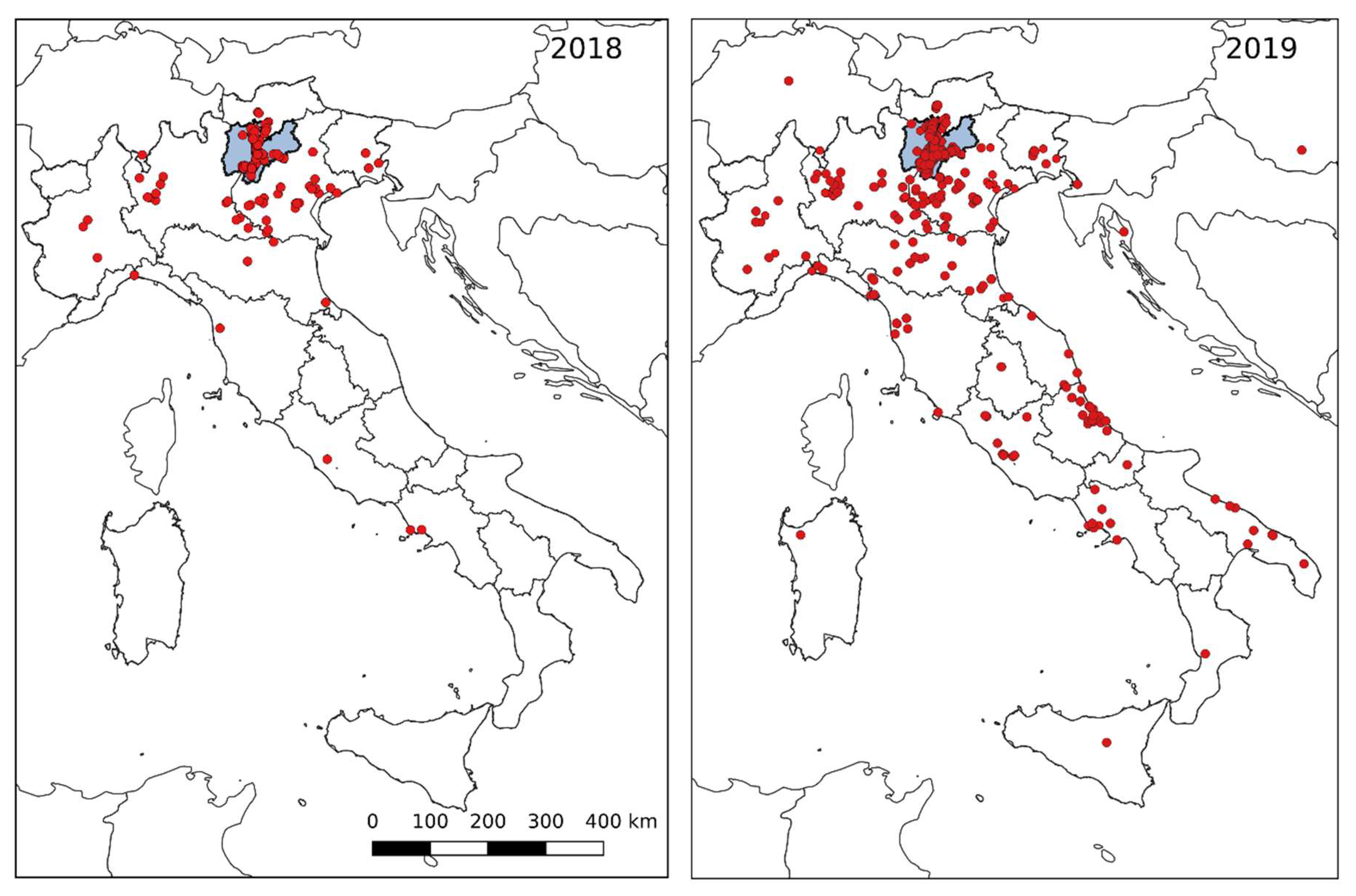