An Occupancy Simulator for a Smart Parking System: Developmental Design and Experimental Considerations
Next Article in Special Issue

Changbai Mountain is situated south-east of Jilin Province in China and has a total area of approximately 3278 km2. The topography and geomorphology of the area is highly complex, and there are numerous large mountains and rivers distributed throughout the region. The elevations range from 2678 m to 725 m, slopes range from 59.31◦ to 0◦, and many regions have slopes greater than 35◦. As a result, some regions exhibit topography and geomorphology that are conducive to the occurrence of geological disasters with high frequency, and strong, sudden destructive characteristics. In recent years, collapses and landslides continue to occur in Changbai Mountain North Slope tourist areas. According to the statistics, there were 119 cases of geological disasters, including collapses, landslides, and debris flow.
The Changbai Mountain volcanic structure is highly developed, and there is intense underground magma activity due to the adjacent eastern deep seismic zone. The monthly frequency of earthquake activity according to volcanic earthquake monitoring data is shown in Figure 2. Before June 2002, the volcanic earthquake frequency was less than 20 per month, with lower reported magnitudes, and weak volcanic activity; after July 2002, the volcanic activity showed a significant increase, reaching a peak in 2003. Since then, the trend has gradually stabilized at this higher level. It is believed that once Changbai Mountain volcano erupts again in the future, volcanic earthquake disasters and their secondary disaster chains will have more serious effect. In 1991, the Mount Pinatubo volcano erupted, and the largest associated earthquake magnitude was 5.6 [31]. Based on this, it is predicted that the largest associated earthquake magnitude will be 6.0 when Changbai Mountain volcano erupts in the future, according to the intensity attenuation formula for eastern China [32,33,34,35]: where I is earthquake intensity, Ms is the earthquake magnitude, and R is the epicentral distance.
The intensity within the radius of R = 40.11 km is 6 degrees, the minimum intensity of geological disaster occurrence considered. Therefore, establishing Tianchi as the center, the Changbai Mountain area with a radius of 40.11 km is selected as the area of study, as shown in Figure 3.

3.3. Construction and Validation of BNs Model

The BN model is supported by a graphical network representing cause and effect relationships between different factors considered in a study [40]. The qualitative component of a BN is a directed acyclic graph (DAG), in which nodes and directed links (“edges”) signify system variables and their causal dependencies [41]. In this paper, the occurrence and evolutionary process of the disaster chain is deconstructed as the interactions between every disaster event indicated by the input elements, state elements, and output elements. In individual disaster events, the input element determines the state element that then influences other state elements, which would lead to the particular event results; output element. In the disaster chain, the state element and output element of primary disaster affect the input element, state elements, and output element of secondary disaster. On the basis of a three-layer structural model of earthquake, collapse, landslide, and debris flow disaster events, all input elements, state elements, and output elements were considered as nodes, and the relationships between the three elements were considered edges in the BN model. The resultant BN model of the earthquake-collapse-landslide-debris flow disaster chain is shown in Figure 5. Error rate and scoring rules were used to validate the accuracy of the BN model for use in hazard assessment models. The scoring rules used extensively were the logarithmic loss, quadratic loss, and spherical payoff that could be obtained using the Netica software. For logarithmic loss (0–∞) and quadratic loss (0–2), scores close to zero indicate that the model is sufficiently accurate whilst for spherical payoff (0–1), scores equal to 1 indicate the best model performance [42]. In this study, there were 300 cases used for learning though the Gradient technique in the Netica software and 60 cases were used for verification. The error rate and scoring rule results are shown in Table 2. The error rate of collapse, landslide, and debris flow nodes was 0, the area under the receiver operating characteristic (ROC) curve was 1, and the error rate of the collapse area, landslide area, and debris flow area nodes was 20%, suggesting that the model could correctly predict the majority of disaster event occurrence. The scoring rule consequences of collapse, landslide, and debris flow events show remarkable model performance and the model is able to obtain the occurrence probability of disaster events, while the scoring rule results of collapse area and landslide area nodes prove the model’s excellent predictive capability. In summary, the BN model performance of the earthquake-collapse-landslide-debris flow chain is sufficiently good enough that the model can be applied in the hazard assessment model of earthquake disaster chains.

The entire area of study is divided into 1 km × 1 km grid cells; the total number of grid cells is 2847, and all attribute values (elevation, slope, aspect, lithology, distance to river, average annual precipitation) of each cell center-point were extracted by the spatial analyst tools in the ArcGIS software. The total grid cell data were converted into case file format and input to the BN model in the Netica software so the occurrence probability of collapse, landslide, and debris flow disaster events and the scale of the collapse area, landslide area, and debris flow area nodes of each grid cell could be obtained from inference of the BN model.
The BN model’s total grid cell output results were converted into ArcGIS file format, according to the natural space classification method that maintains the consistency of the category. The raster reclassification tool in ArcGIS spatial analysis was used to classify the earthquake disaster chain hazard map into five subzones corresponding to the evaluation factor grade assignment: Very high hazard areas, high hazard areas, medium hazard areas, low hazard areas, and very low hazard areas. The probability and hazard intensity of collapse, landslide and debris flow disasters are shown in Figure 6, and the earthquake disaster chain hazard zoning map of the studied area as obtained by ArcGIS is shown in Figure 7.

4.1. Comparative Analysis of the Hazard Map

Figure 6 illustrates the probability and hazard intensity of collapses, landslides, and debris flows derived from the BN based on Netica software. From the visualization analysis of the probability map, it can be seen that the occurrence probability of disaster events indicates approximately the same trend. From collapse to debris flow, the probability of disaster decreased in the northern and western region of the studied area, mainly because of the variation in rainfall. From the areas of very high hazard intensity located around the Tianchi, it is obvious that the spatial mode of the hazard intensity follows the distribution of the slope and elevation observed in the Changbai Mountain region. The other hazard intensity classifications differ due to common effects of topographic factors and occurrence probability.
Figure 7 shows the earthquake-collapse-landslide-debris flow disaster chain hazard zoning map that was constructed according to the disaster chain hazard assessment model. From visual analysis of the earthquake disaster chain hazard map, it seems to fit the trend of elevation and slope. Zones of very high hazard are predominantly located within a 15-km radius of Tianchi, with a distribution area accounting for approximately a fifth of the total studied area. The high-hazard zones are situated in the southern region of the studied area. While the northern and the western regions of the studied area mainly contain very low-to-low hazard values, the distribution area in this case accounts for approximately half of the total studied area. According to this analysis of the earthquake disaster chain hazard zone, it is evident that the spatial trend of the earthquake disaster chain hazard zone follows the distribution of elevation and slope. The interrelations between the lithological coverage and the earthquake disaster chain hazard values are also noted. More importantly, regarding the development of the disaster chain, the favorable terrain for collapses to be induced by earthquakes was that with high elevation and slope, with their occurrence directly leading to a change in the surrounding disaster environment and an increase of hazard factors, which led to landslides and even full disaster chains in certain geological environments. The southern region of the studied area with very high elevation and slope is characterized by high hazard values, of which the probable reason is that there is low annual average precipitation in this region compared with the Tianchi center. Minimal rainfall is seen to significantly limit the occurrence of landslides and debris flows, which is consistent with the results of previous research [44,45]. From this analysis, it can also be concluded that the distance of the region to the river was not a critical factor in the hazard assessment of the earthquake disaster chain.

The authors are grateful to the anonymous reviewers for their insightful and helpful comments to improve the manuscript. 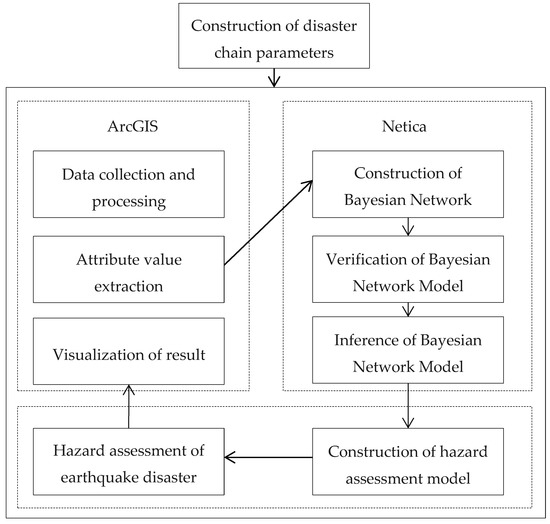 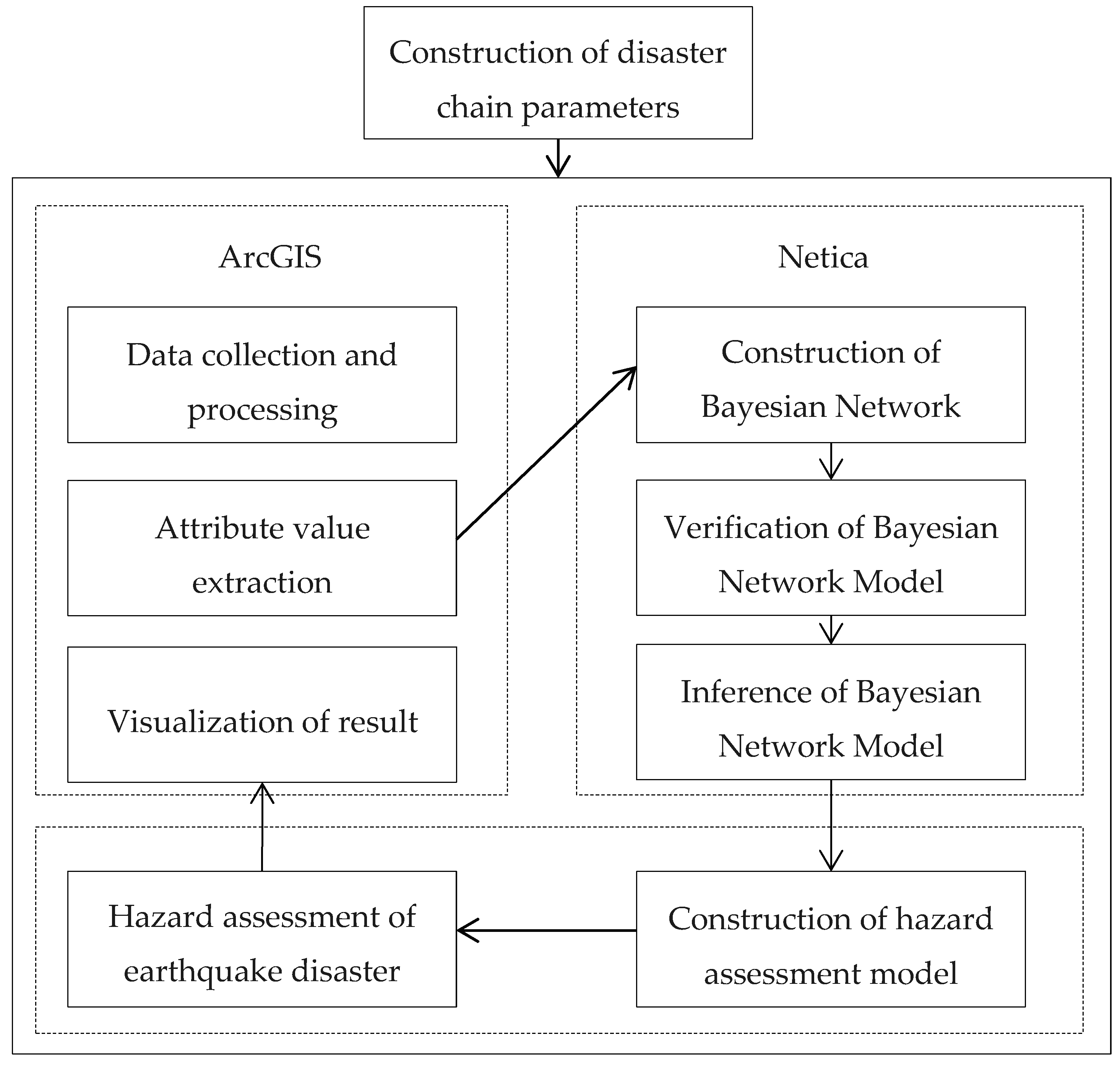 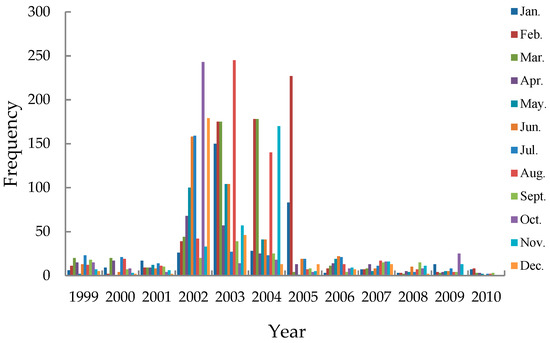 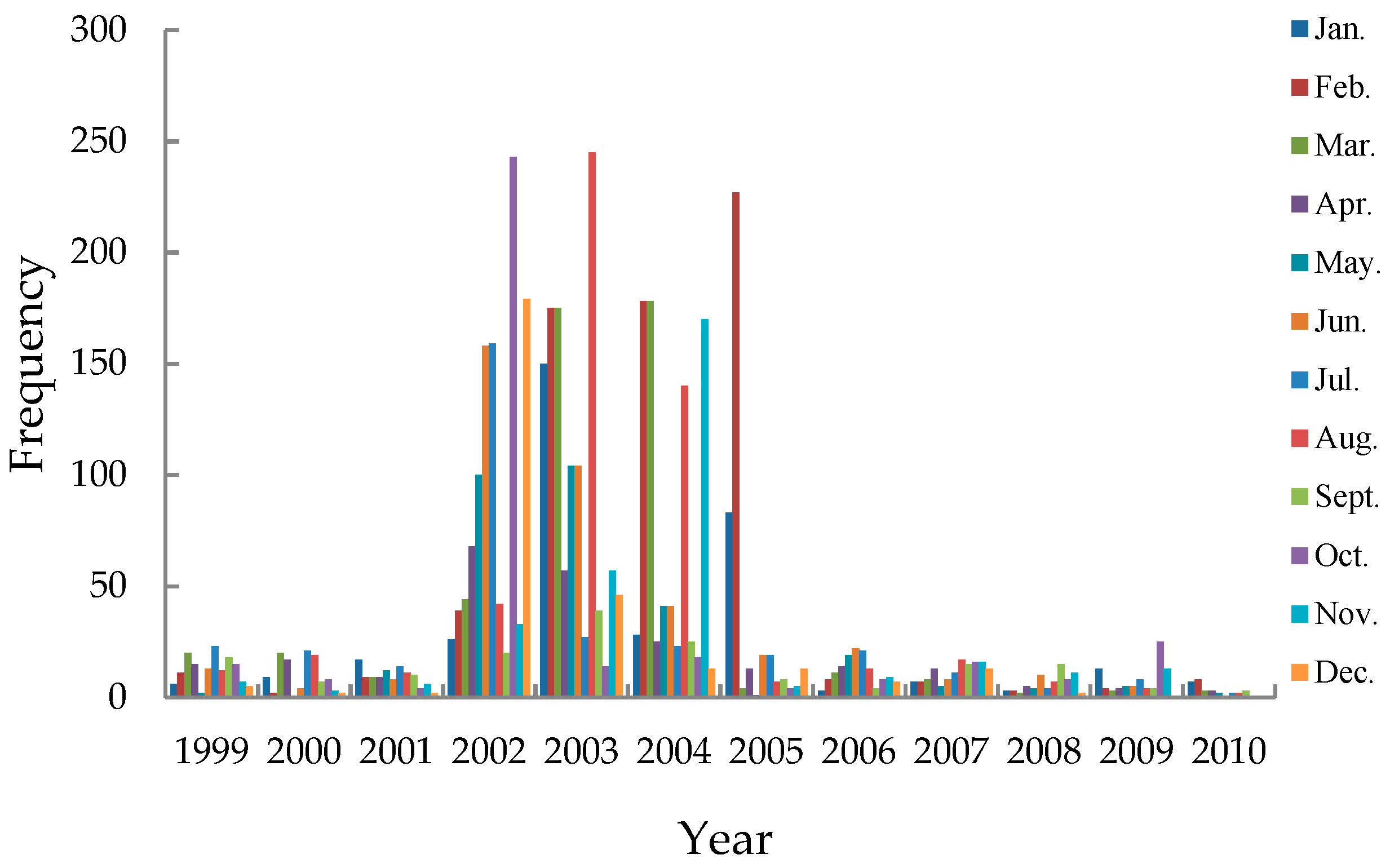 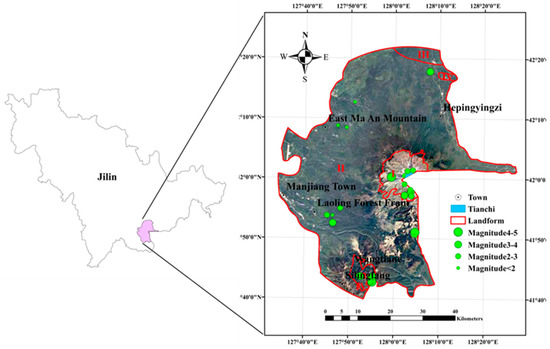 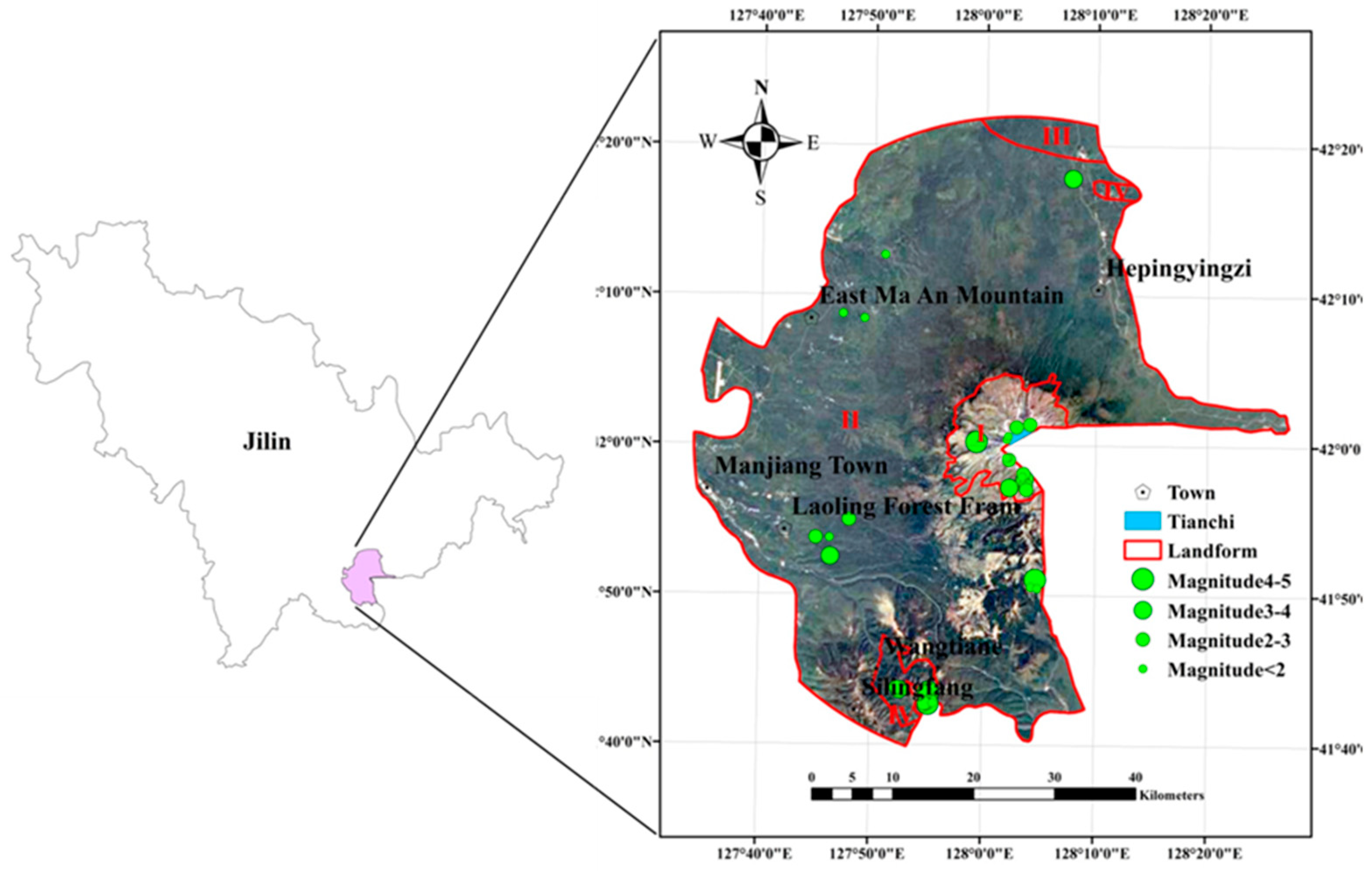 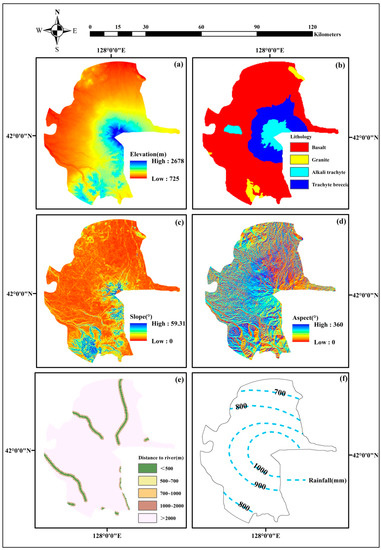 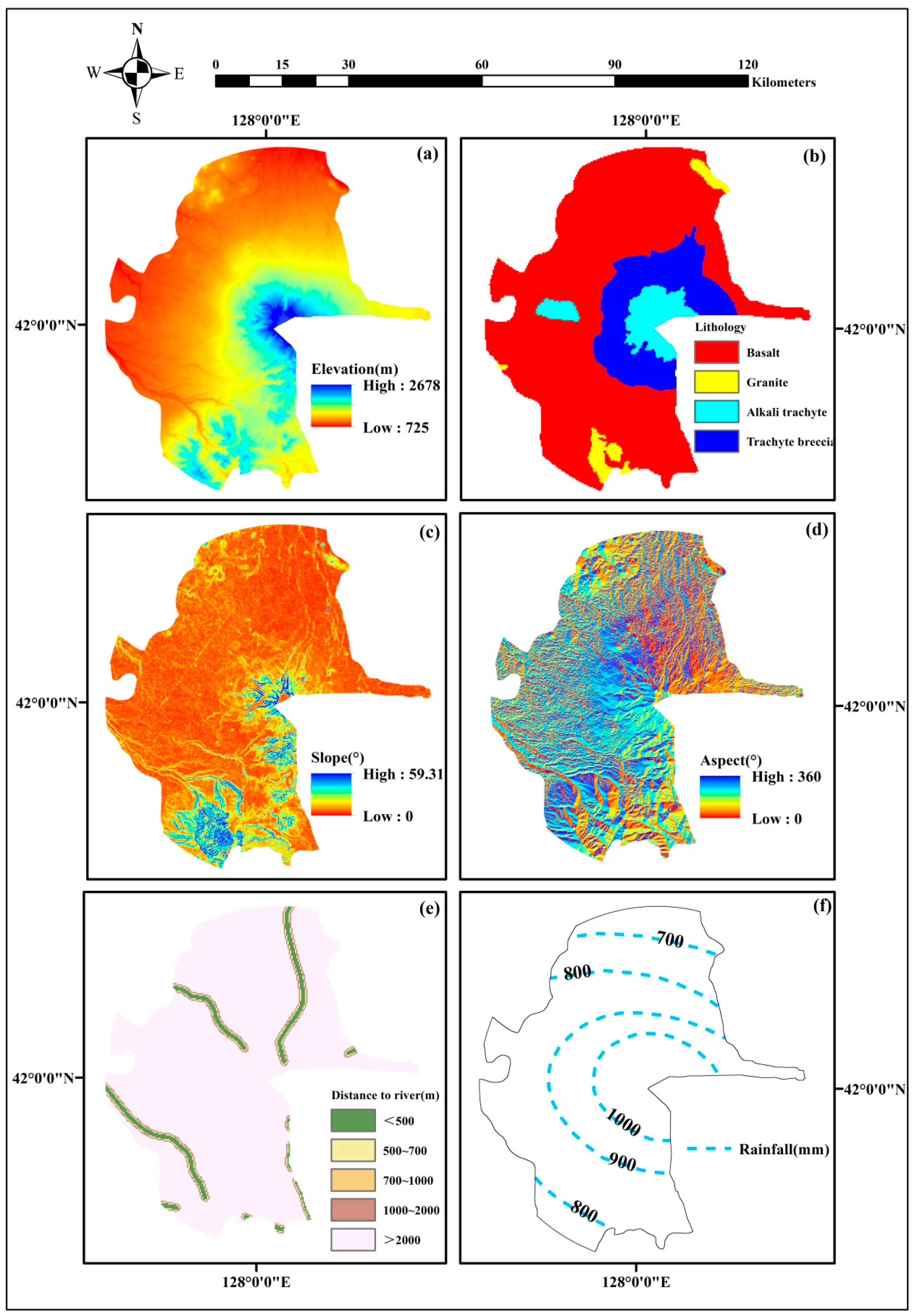 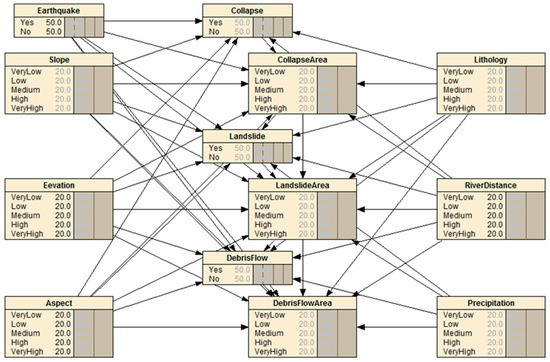 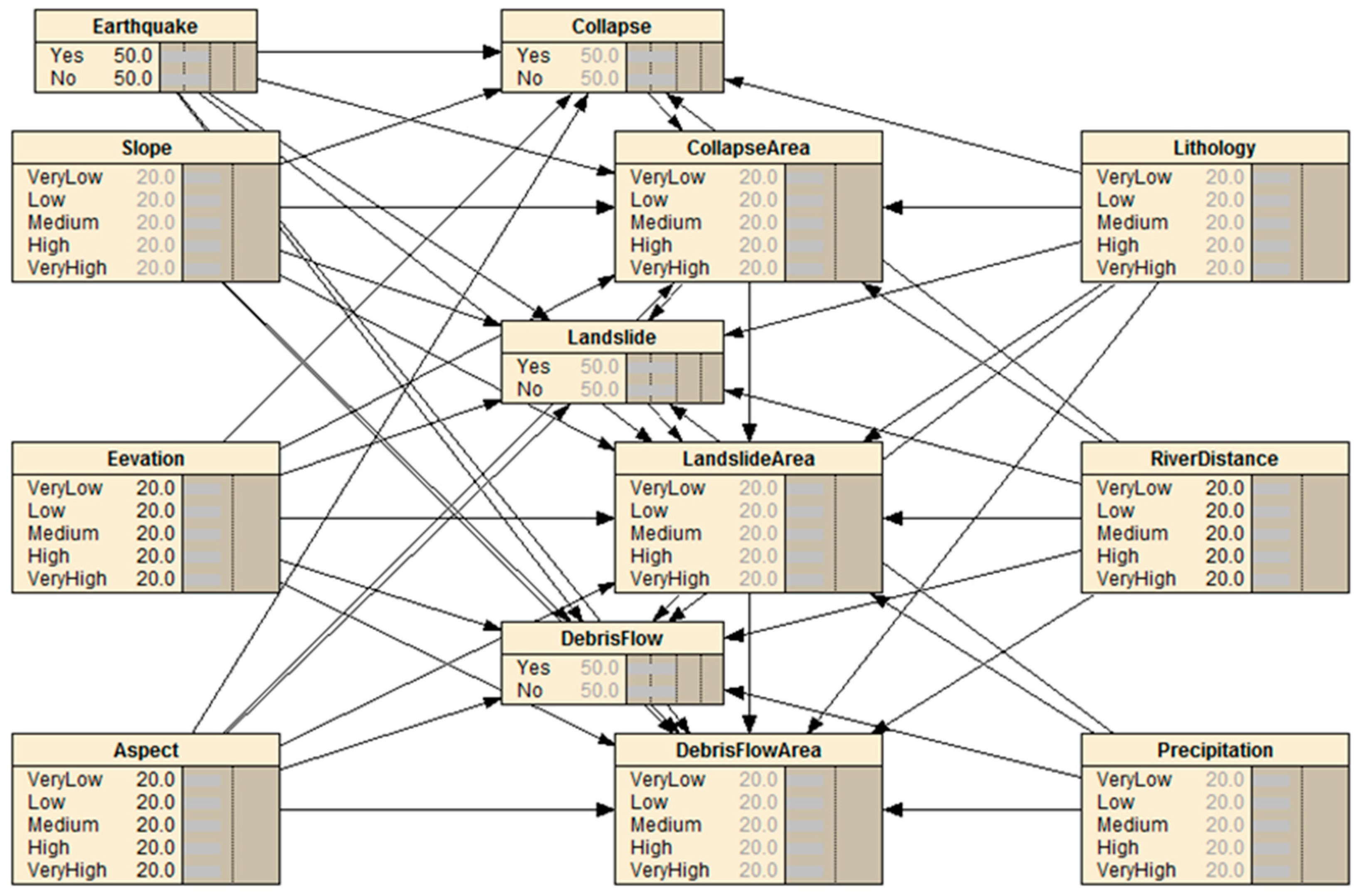 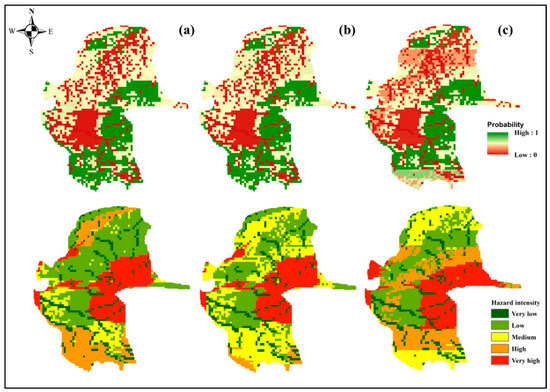 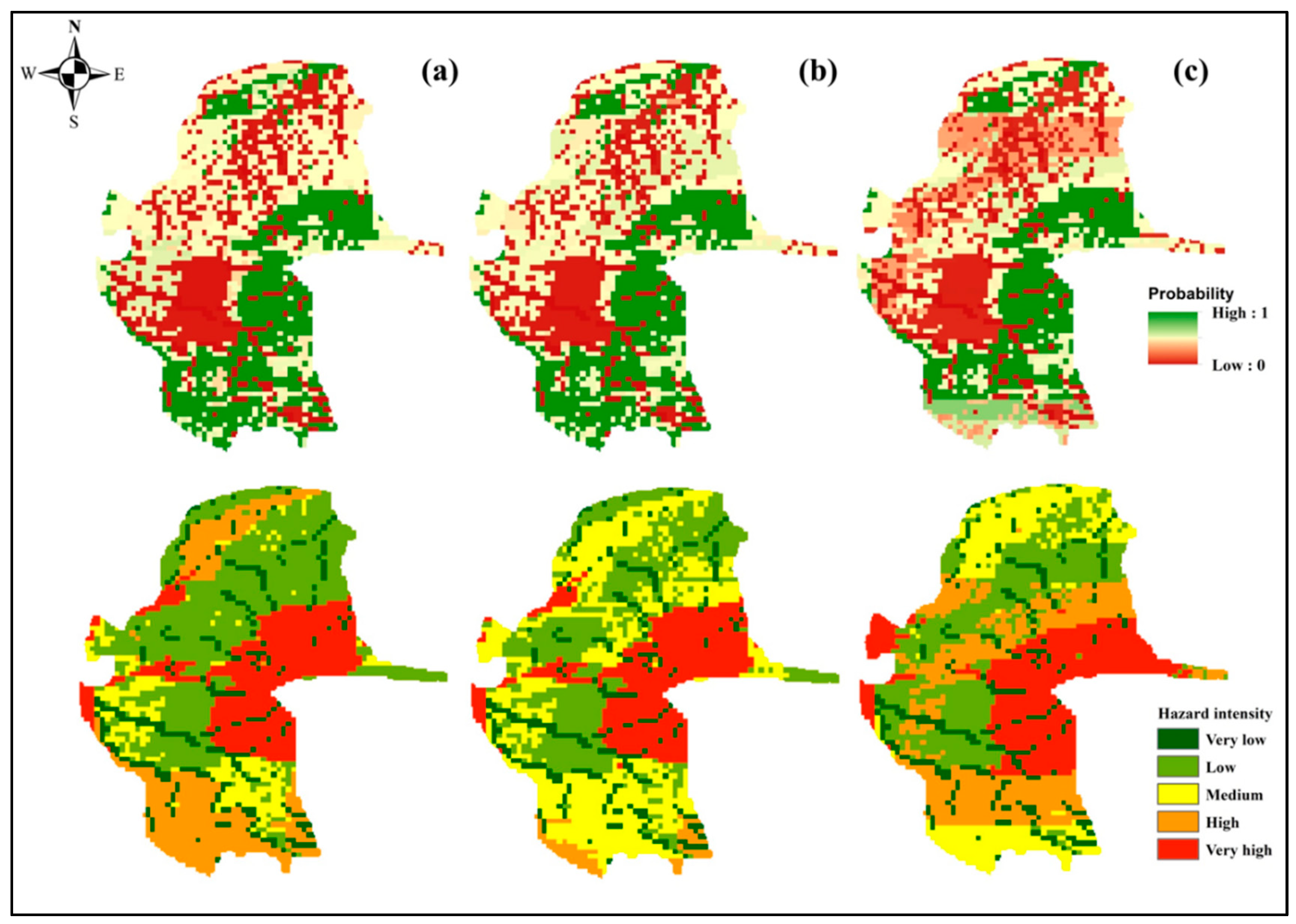 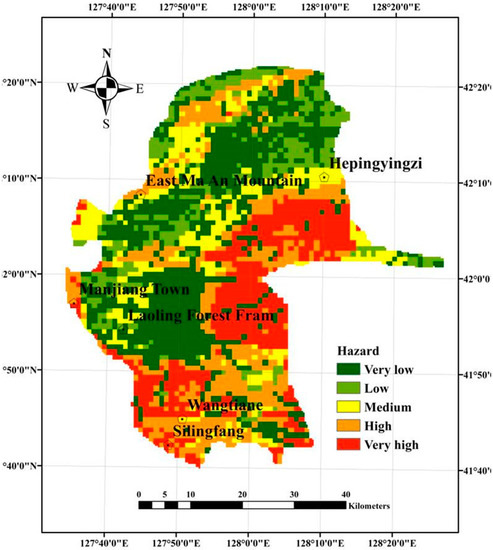 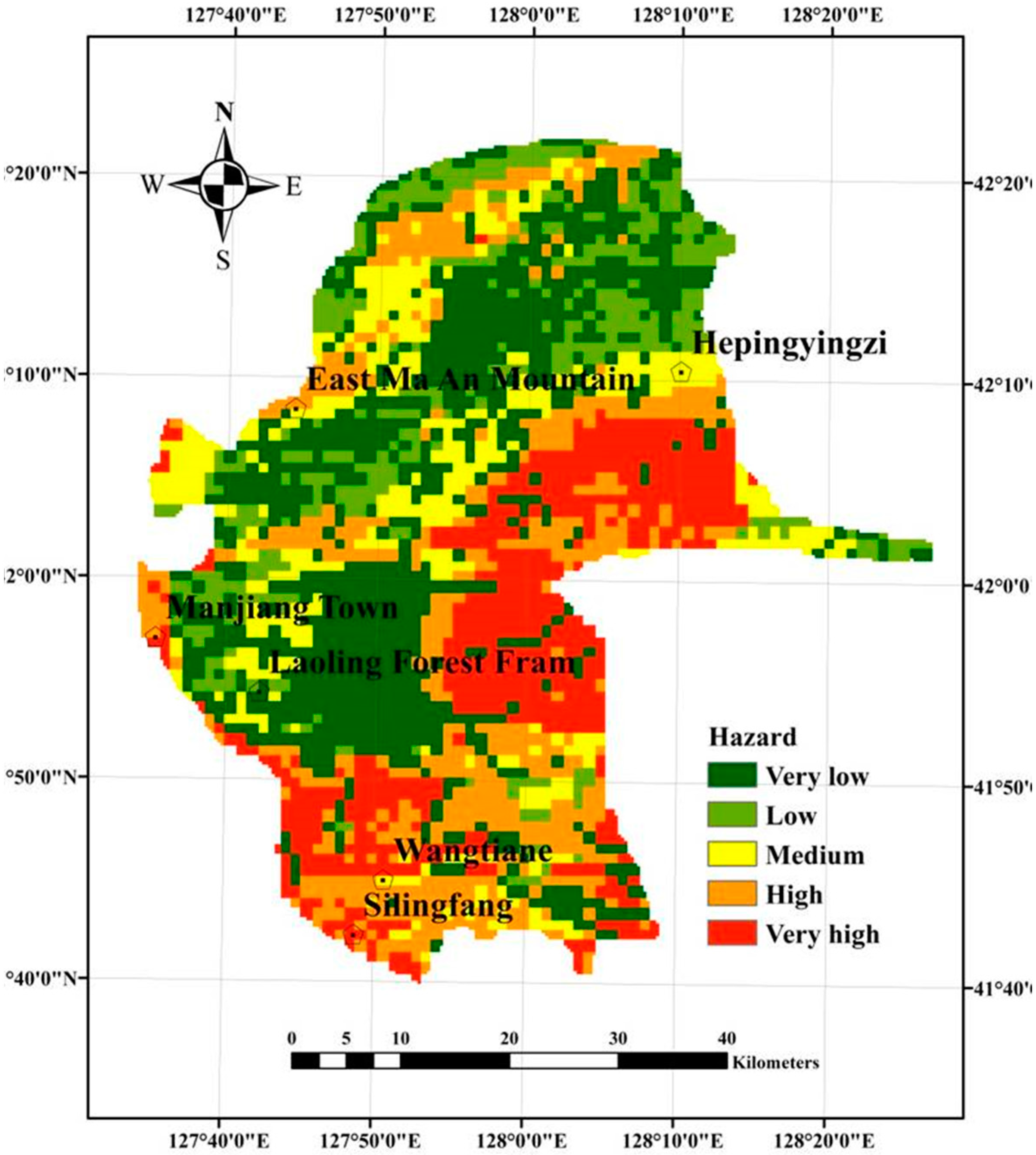 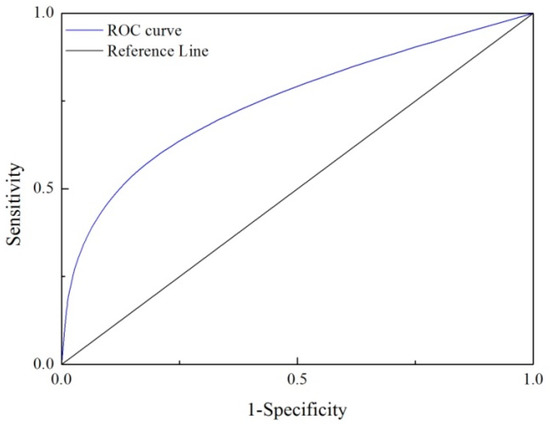 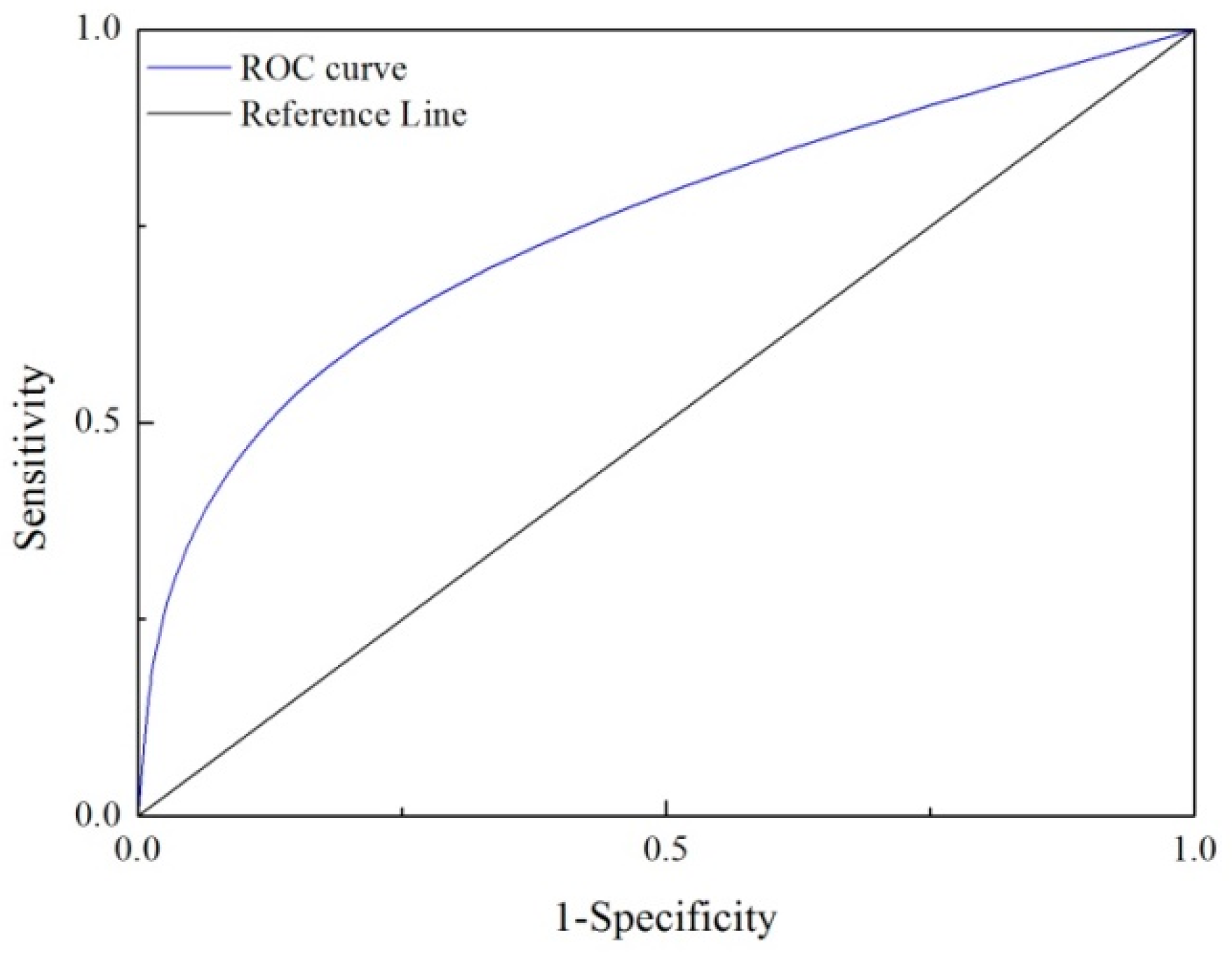