Expressing History through a Geo-Spatial Ontology
Previous Article in Journal

Geo-Referencing and Mapping 1901 Census Addresses for England and Wales

In this section, we describe the proposed method for precise fused transparent visualization of large-scale complex point clouds acquired by laser scanning of cultural heritage objects. The proposed method is an extension of SPBR, which was developed in our previous research.

Similar to the conventional SPBR visualization procedure [21], the fused transparent visualization also consists of three steps.
STEP 1. Creation of point ensembles
We adjusted the number of points according to the desired opacity and then randomly divided the points into multiple groups that we refer to as “point ensembles.” Each point ensemble is statistically independent and has the same point density. Hereafter, we refer to the number of point ensembles as the “ensemble number” and denote it by L.
STEP 2. Point projection and background fusion
For each point ensemble, we created an intermediate image by projecting the 3D points onto a 2D image plane. In this process, we considered point occlusion per pixel. In other words, if a pixel is projected by multiple points, its value is determined by the nearest point along the sight direction. If a pixel is projected by none of the points, its value is given by the background photographic image. This step differs from the conventional SPBR. Thus, each intermediate image is a fused result of the point ensemble and the background photographic image.
STEP 3. Intermediate image averaging
The output fused transparent image of the point cloud data and the photographic image was created by averaging the L intermediate images. Thus, an SPBR-based fused transparent visualization of the point cloud and background was achieved.
The difference between the proposed method and the conventional SPBR [21] is that rather than using a specific fixed color for the background in STEP 2, the proposed method used the pixel color of the selected photo as the background image. Therefore, the background of the transparently visualized target object is its surrounding scene captured in a photograph rather than a single-color. Scheme of the proposed fused transparent visualization is shown in Figure 1.

2.2. Application to a Laser-Scanned Point Cloud

We applied our method to a laser-scanned point cloud of the Hachiman-Yama float in the Gion Festival (Figure A1 and Figure A2) and fused it with a corresponding background photographic image. The point cloud acquired with a RIGEL laser scanner (VZ-400) contains 2.62 × 107 points. Figure 2 shows the comparison result of the conventional SPBR based method and the proposed method . Figure 3 shows the local details of the visualization results of the two methods.
As can be seen in Figure 2c, the scale and surroundings of the float can be perceived, as well as its inner structure, using the proposed method. However, with the effect of the background, the visibility of the float decreased compared to the visibility obtained using the conventional visualization method without the background. Thus, we proposed a visibility enhancement method to solve this problem.

As described in the previous section, the proposed method achieved fused transparent visualization of the point cloud and the background photographic image. However, the visualized point cloud, particularly parts with a lower opacity, becomes unclear after fusing with the colorful background. In this section, we analyze the problems and propose solutions to enhance the visibility of the fused transparent visualization.

When a pixel has fewer projected points, its color will be dominated by the background color, even when the colors of the projected points and the background differ significantly. This problem can be solved by setting a higher opacity in transparent visualization using SPBR. However, higher requires a very large number of projected points, which is extremely difficult in practice. Therefore, we proposed a color enhancement method by replacing the background color with the average point color according to a certain probability.
For the regions only contained in the background, the pixel color in the final image was defined only by the background photographic image. Otherwise, we compared the normalized number of projected points of each pixel to a threshold. If was greater than or equal to the threshold, we considered that a sufficient number of points were projected to the pixel and did not perform any extra processes. On the other hand, if was smaller than the threshold, color enhancement was required for this pixel. Because the final image was generated by averaging the intermediate images, we performed a subsequent process on the pixels of the intermediate images. For each pixel that needed to be color-enhanced, we examined its corresponding pixels in the intermediate images. If the pixel in the intermediate image was not projected by any points, rather than the background color, its color was set to the average color of the projected point by a probability .
Figure 6 shows the results of color enhancement at different values (). In this experiment, we set the threshold for the normalized number of projected points to 0.3, which is consistent with opacity . As can be seen, with a higher value, the color of the point cloud had been enhanced. However, higher led to unnatural enhancement on the visualized image. We considered 0.6 to be an appropriate value for in this application.

This work was supported in part by JSPS KAKENHI, grant number 16H02826. 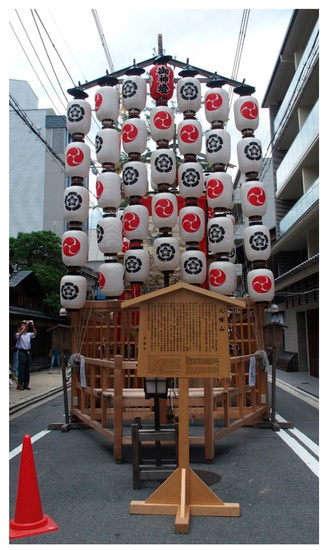 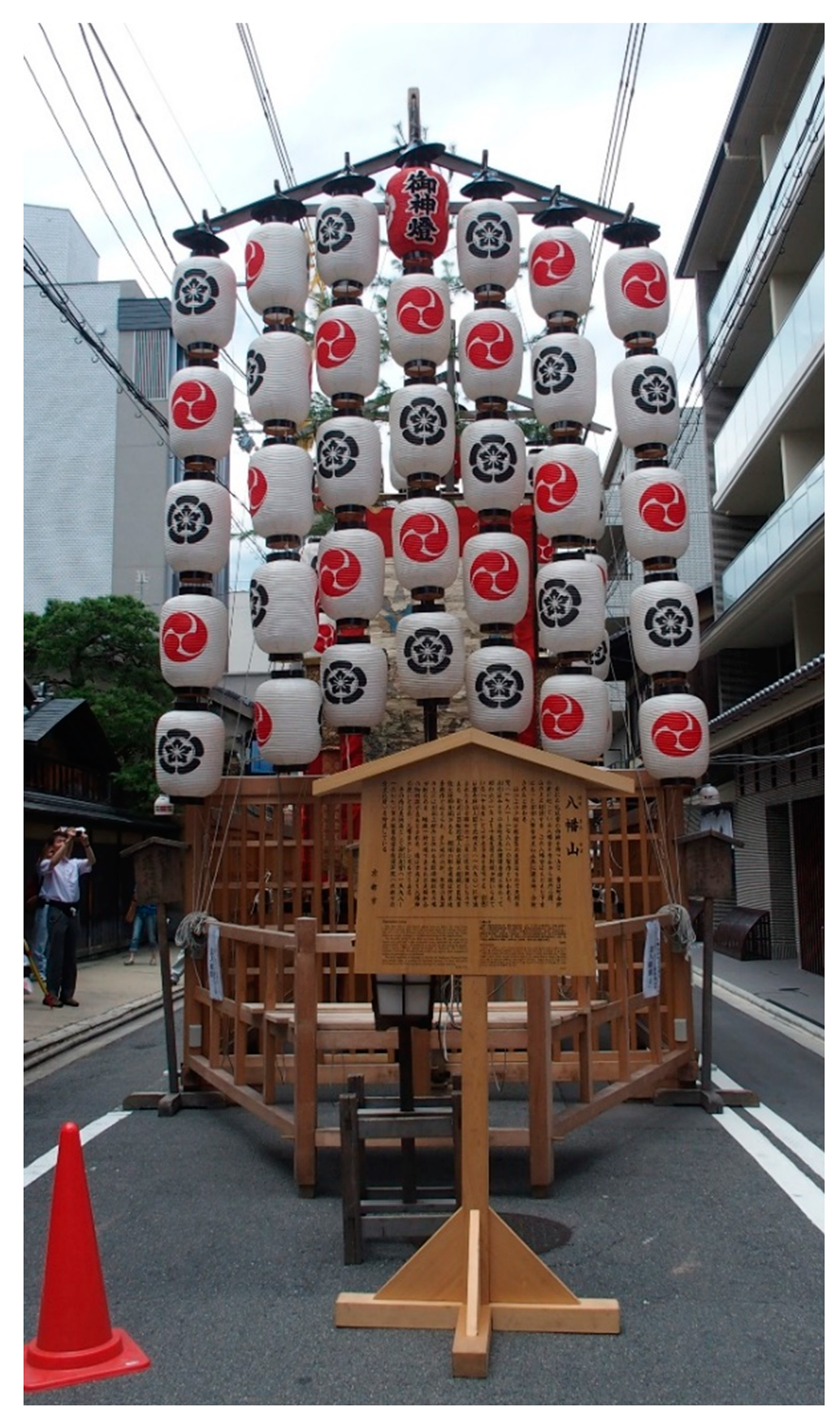 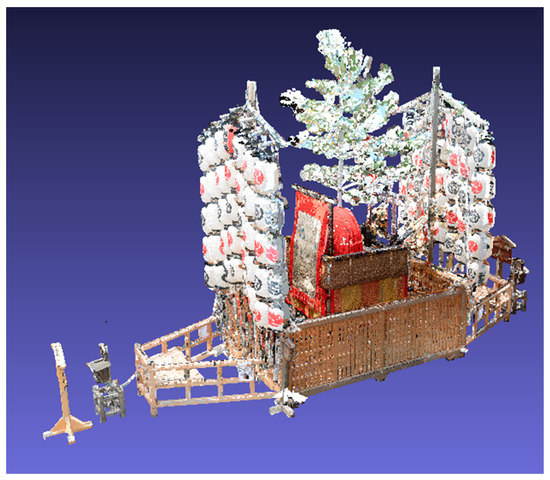 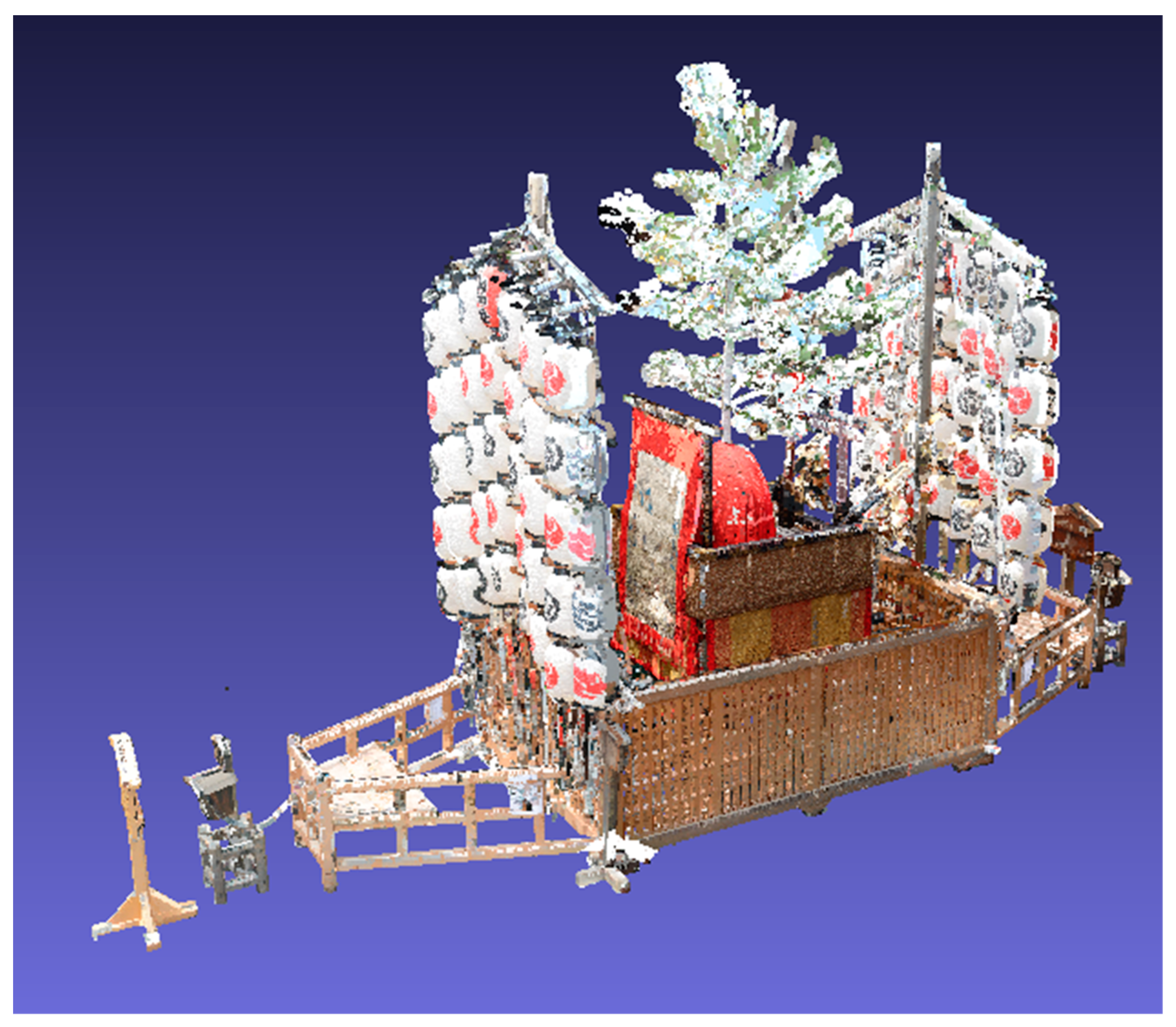 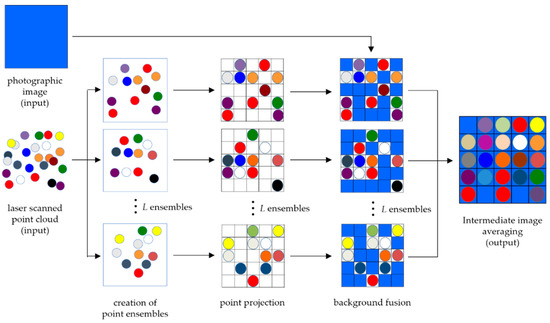 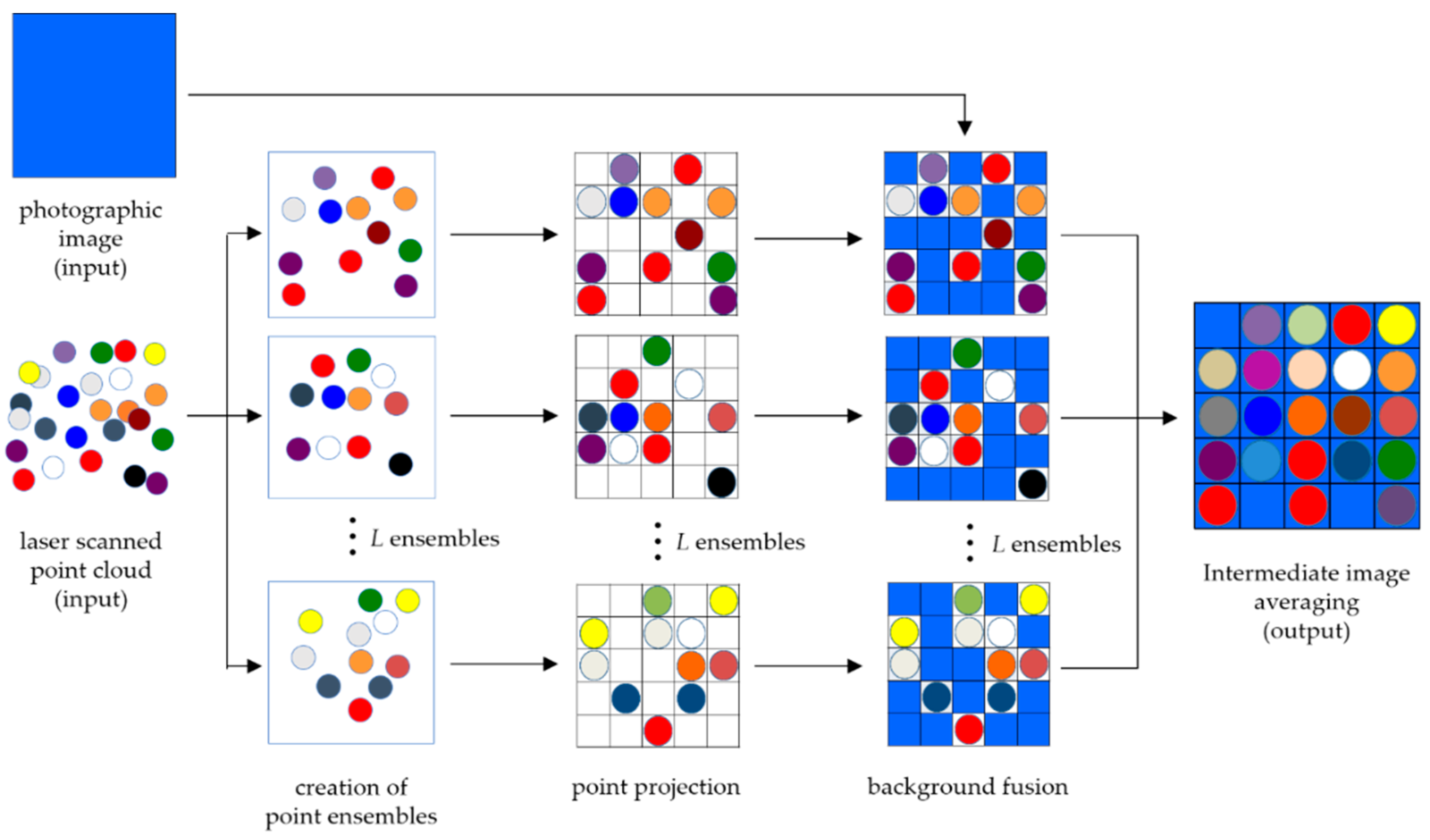 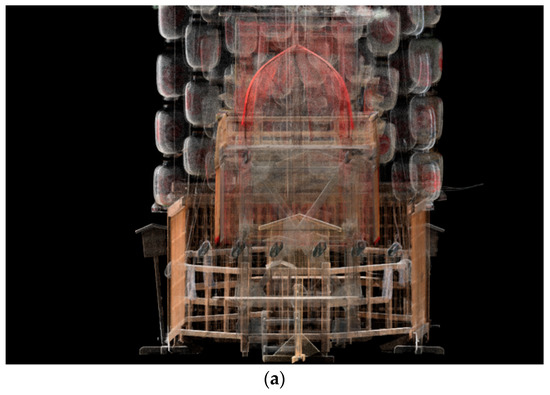 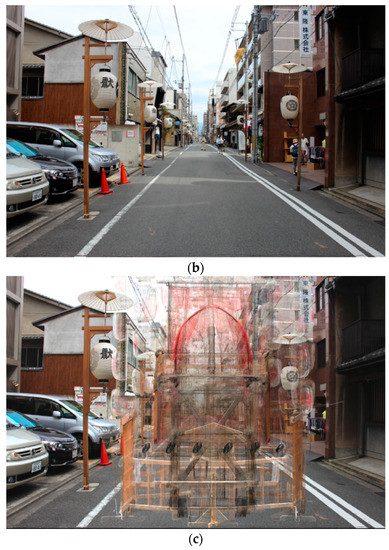 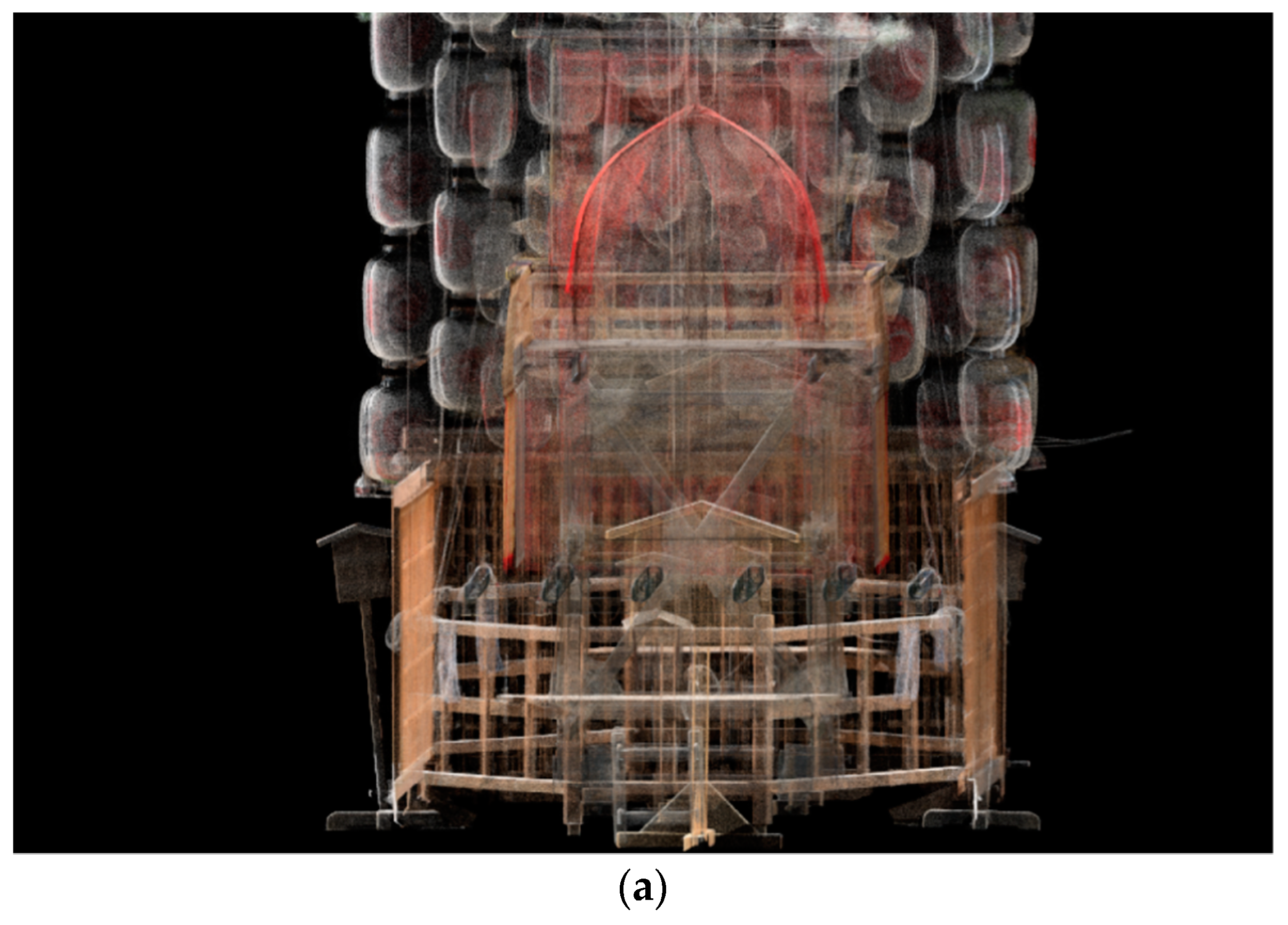 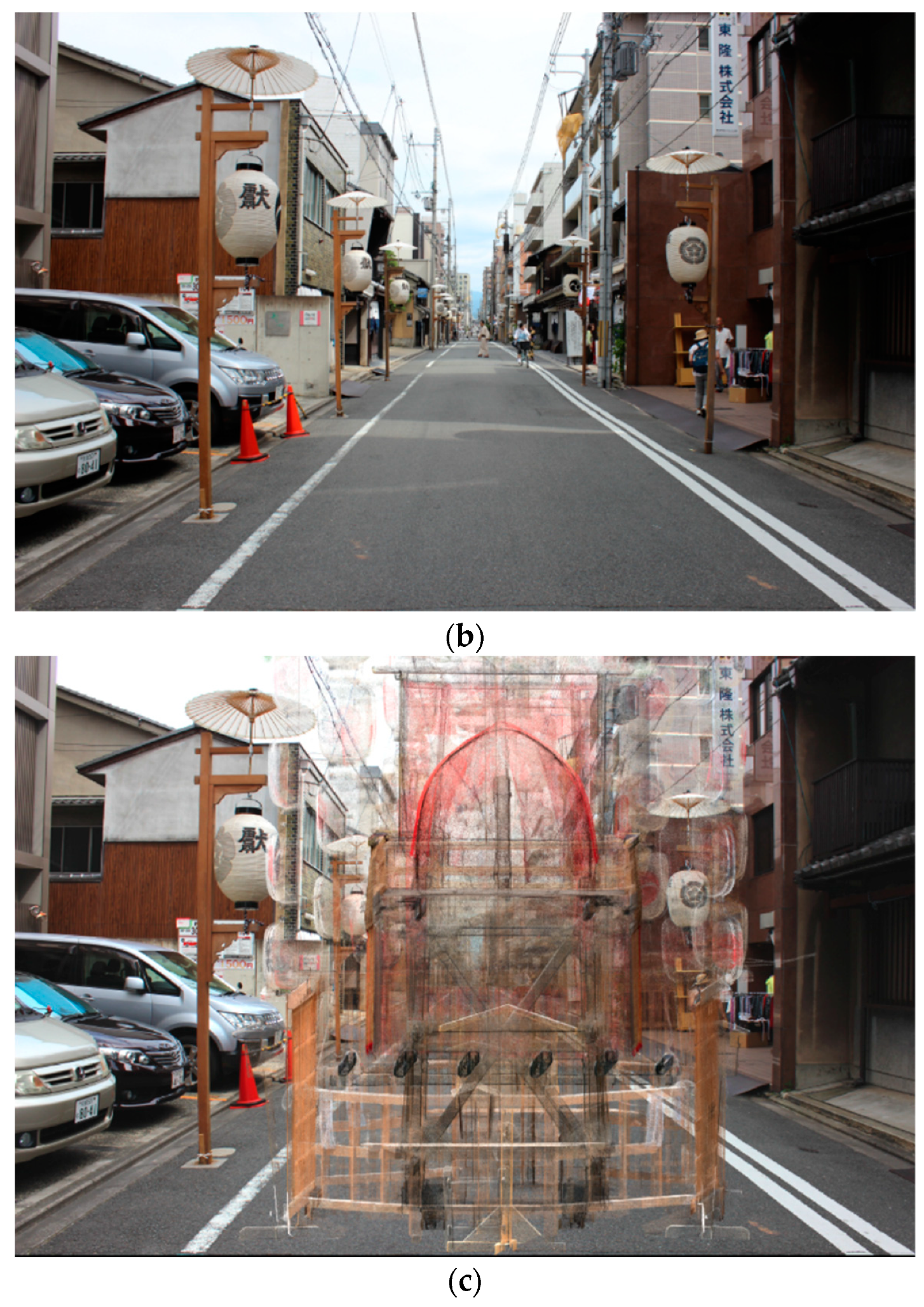 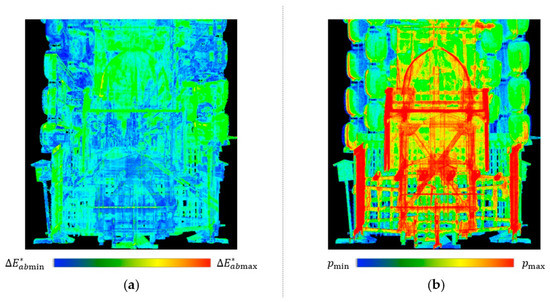 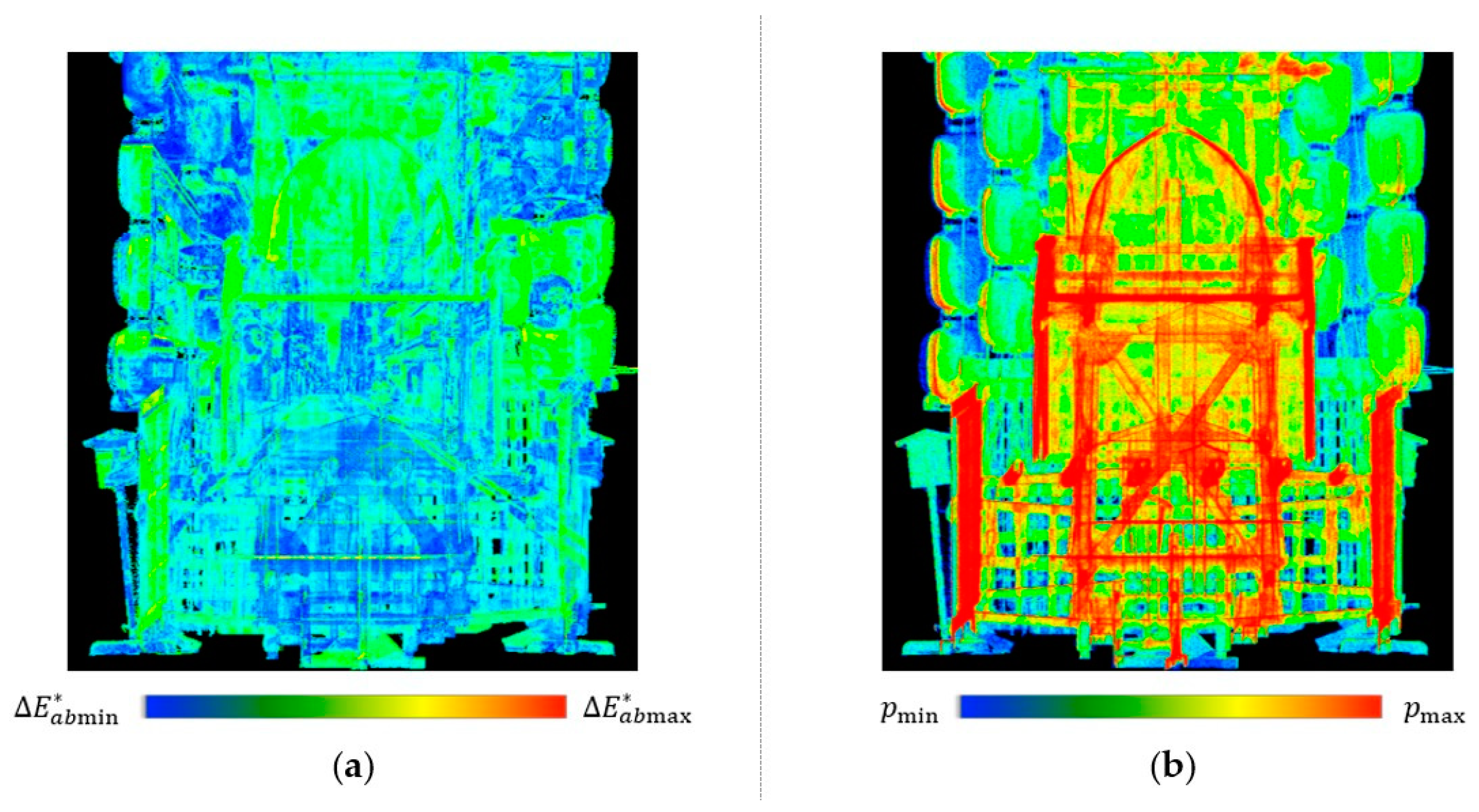 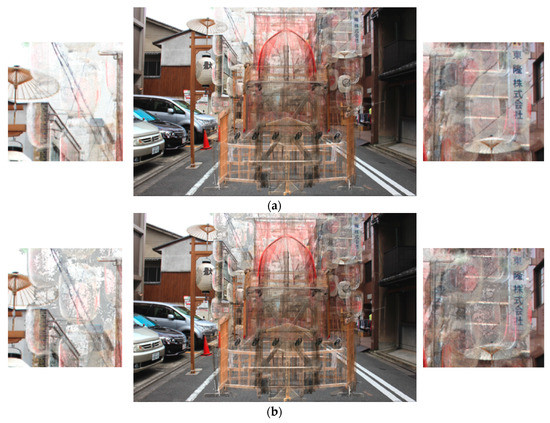 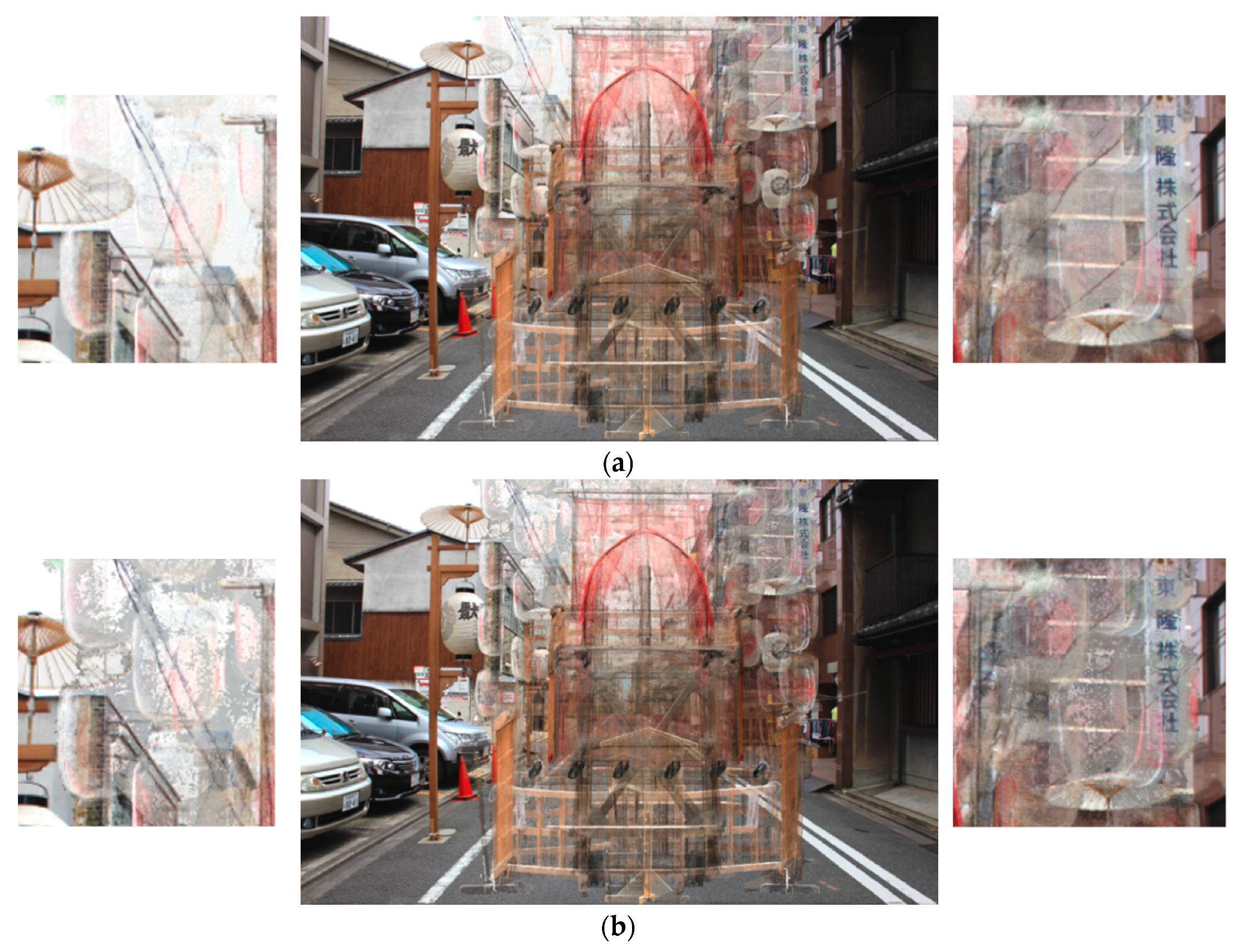 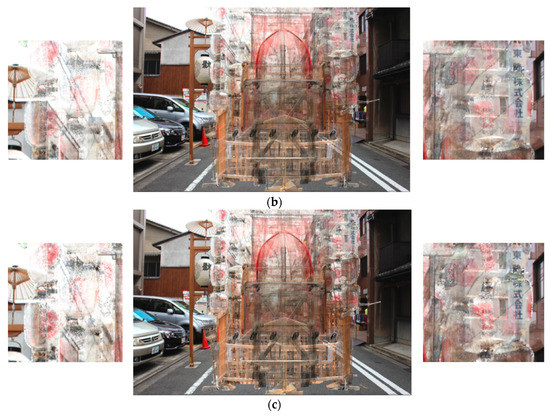 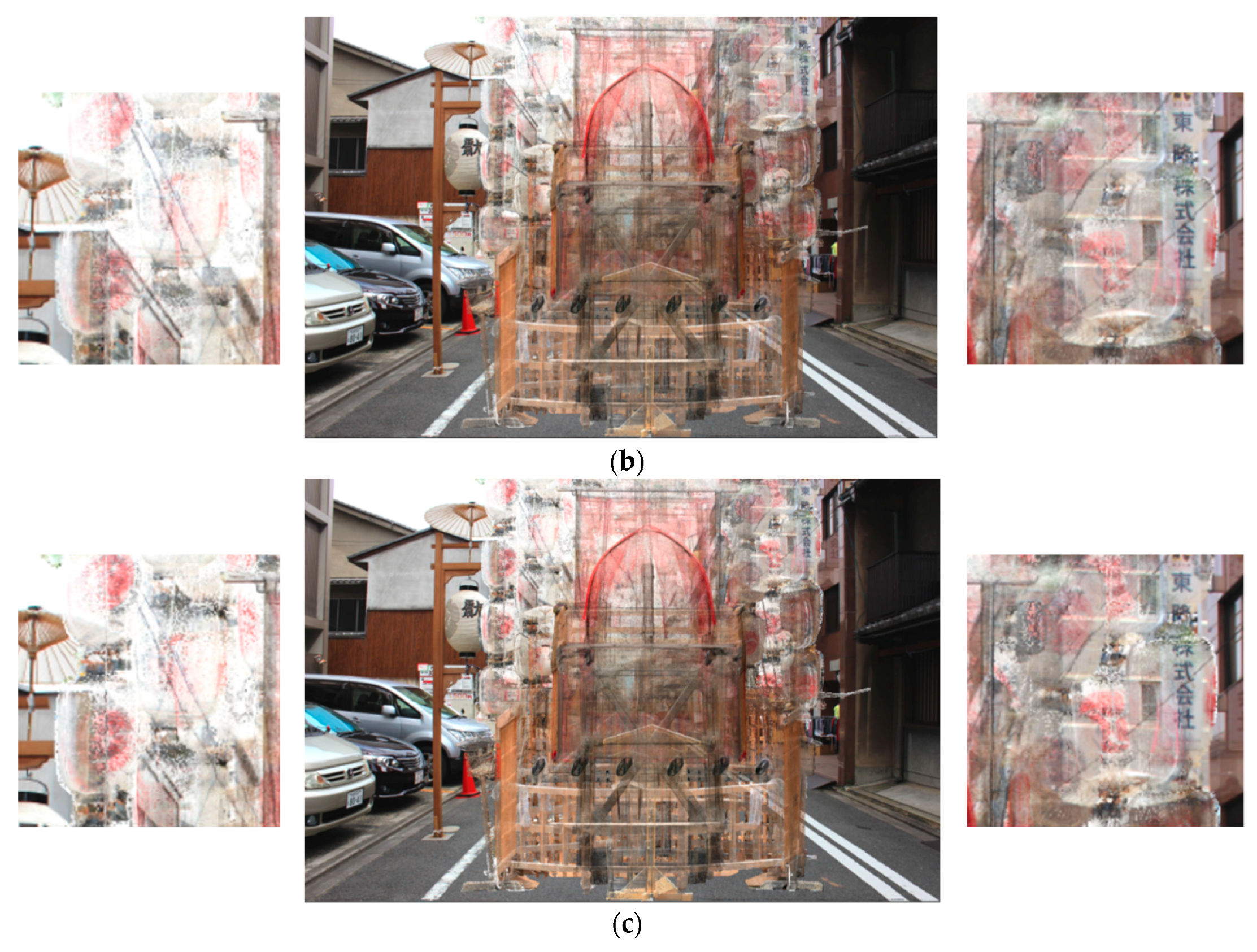 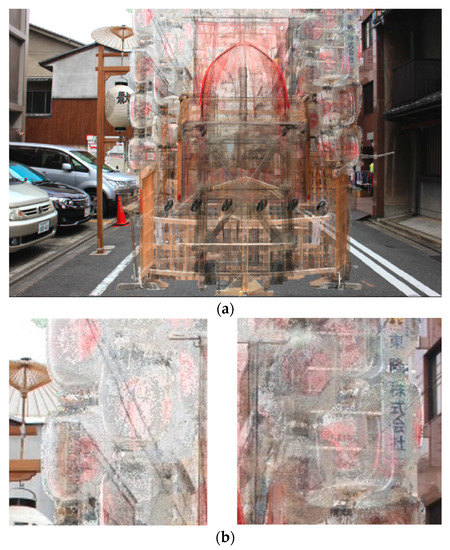 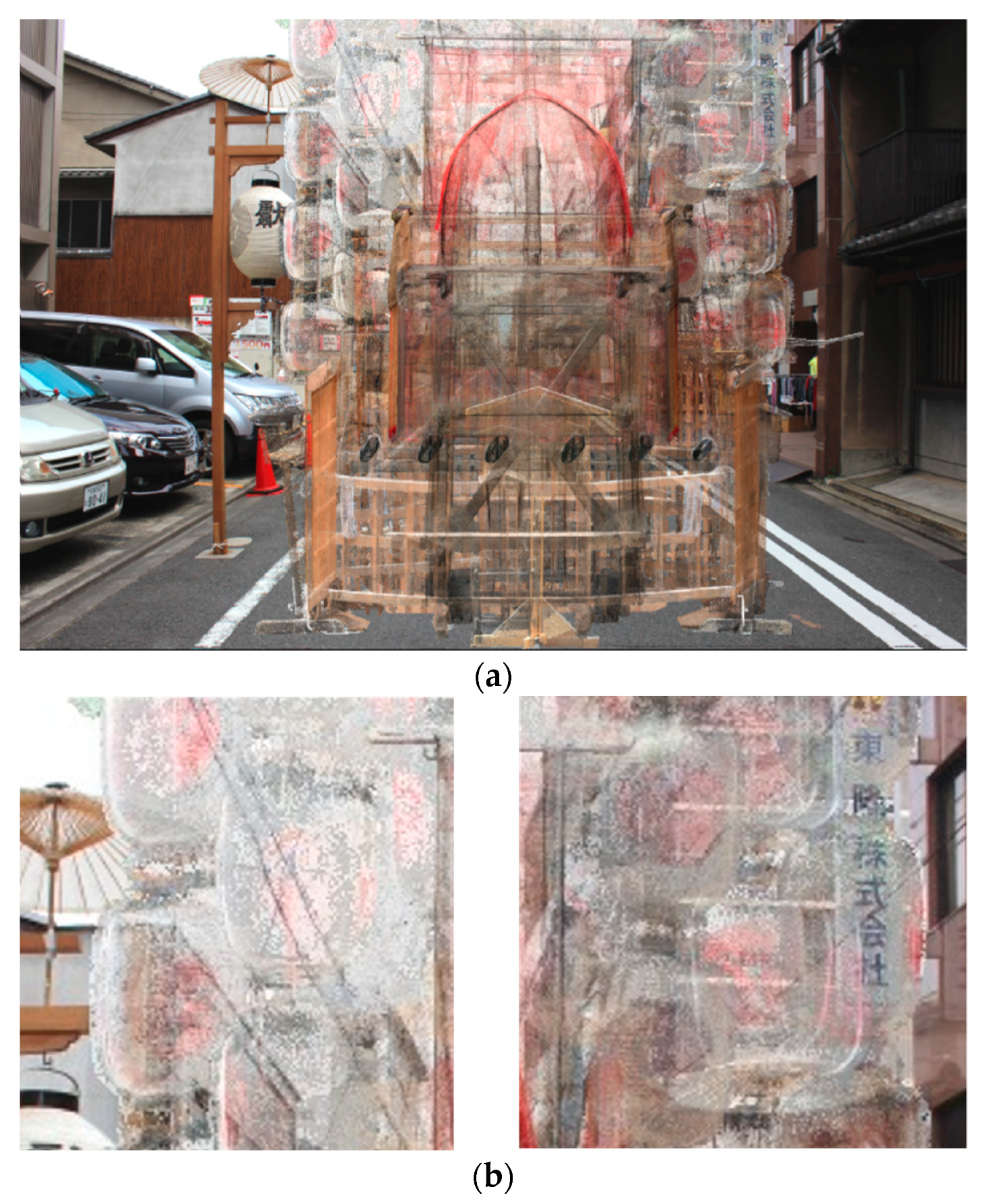 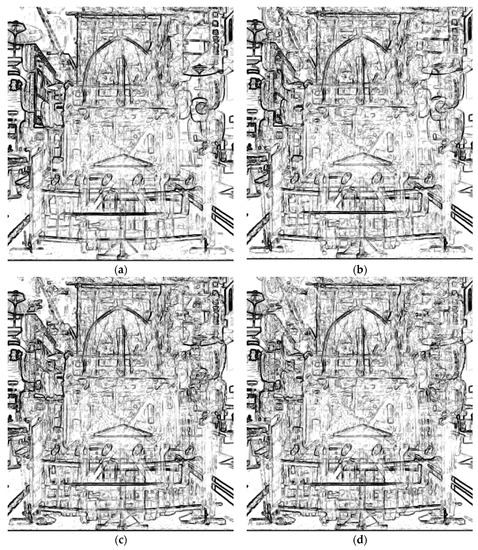 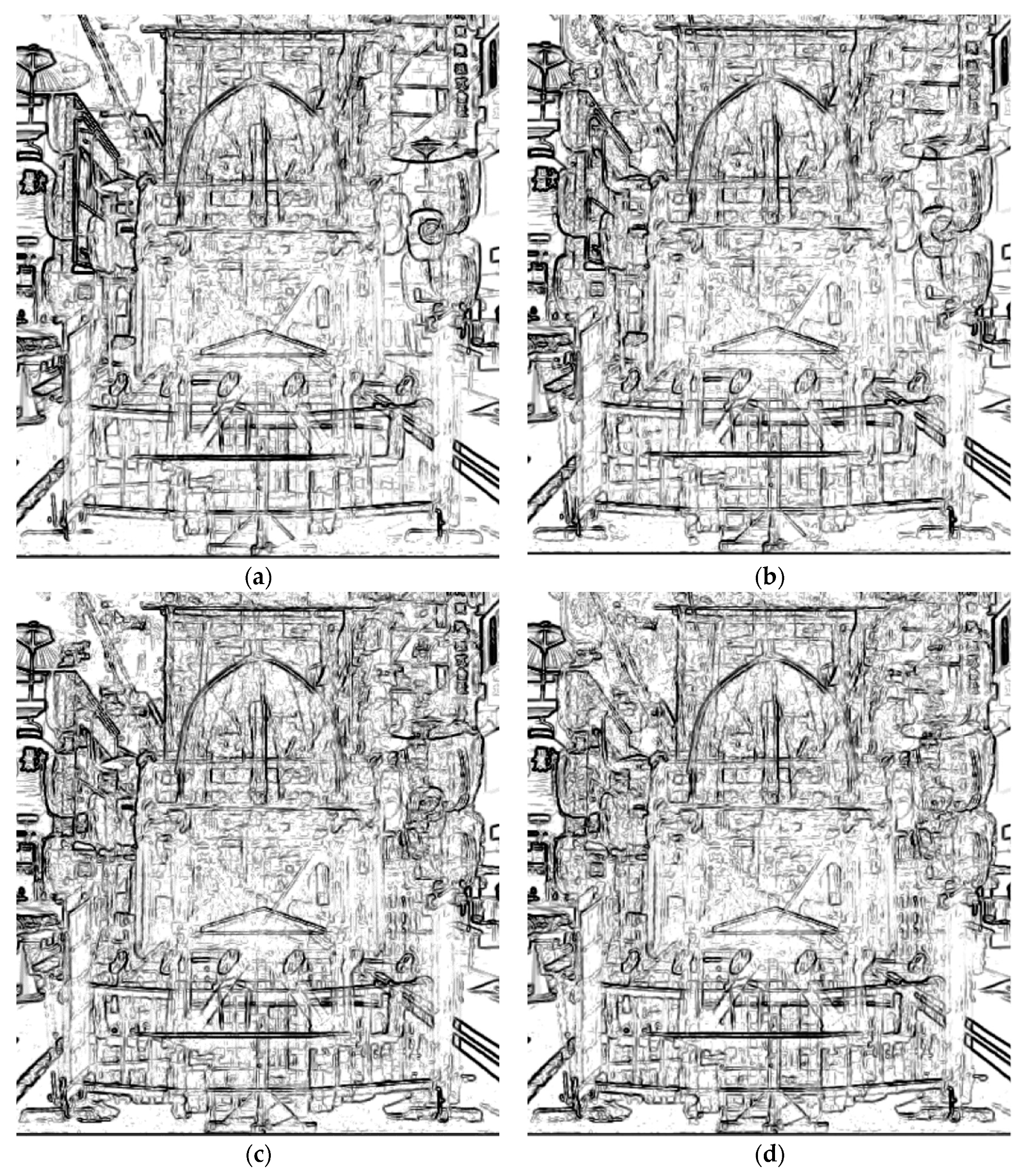