The shadow fraction of the canopy is an important factor in Bidirectional Reflectance Distribution Function (BRDF) and in estimating physical quantities, such as tree height and biomass. Shadows are used as a shielding ratio for direct solar irradiance, but, at shorter wavelengths, the amount of diffuse solar irradiance is greater, so the shielding ratio cannot be ignored. The shielding ratio of direct and diffuse solar irradiance is called Cast Shadow (CS) and Self Cast Shadow (SCS), respectively; however, it has been pointed out that the effect of these shadows is greater at higher resolutions, such as Sentinel-2. In addition, the Bottom Of Atmosphere (BOA) reflectance is greatly affected by shadows, because it is corrected for atmospheric effects. Therefore, the main purpose of this study is to investigate the spatial variability of CS and SCS and simulate the Sentinel-2BOA reflectance with these shadows. The target forest was a greenness season of a deciduous broadleaf forest in Thailand. First, we obtained a point cloud of the forest by Structure from Motion while using the Unmanned Aerial Vehicle. Next, we created a voxel model with CS and SCS as attributes. CS was calculated as the percentage of area where the plane that is assumed per voxel is shielded from direct solar irradiance by other voxels. SCS was calculated as the percentage of area where the hemispheric radiant environment is shielded by other voxels. Subsequently, using solar irradiance and leaf spectral reflectance data, the reflectance of each band of Sentinel-2 was simulated. Nine leaves were used to investigate the effect of leaf species on the simulation. The reflectance acquired by Sentinel-2 is not at the leaf level; however, we used this spectral reflectance data because the reflectance was simulated at the same spatial resolution as the voxel size. Voxel sizes of 20 cm, 50 cm, 100 cm, and 200 cm were used. Our result showed that (1) the spatial variability of SCS was smaller than that of CS when the sun position is fixed and the view zenith angle is changed. SCS was mostly 0.12 at different zenith angles, while the CS had a maximum value of 0.45 and a minimum value of 0.15. (2) The accuracy of the simulations was evaluated using the Root Mean Square Error (RMSE). The best RMSE is 0.020 ± 0.015 and the worst one is 0.084 ± 0.044. It was found that the error is larger in short wavelength infrared bands. (3) In this forest, the relative reflectance changed only about 1.2 times as much, as the voxel size was increased from 20 cm to 200 cm. In this study, we have simulated a single Sentinel-2 image. In the future, we will simulate multi-temporal images in order to investigate the effects of phenology and shadow changes on the reflectance that was observed by optical sensors. View Full-Text
Keywords: Sun-Target-Sensor-Geometry; shadow; point cloud; Unmanned Aerial Vehicle; spatial variation Sun-Target-Sensor-Geometry; shadow; point cloud; Unmanned Aerial Vehicle; spatial variation
►▼ Show Figures 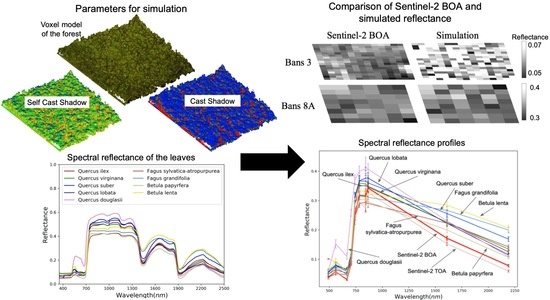