Spatial data of regional populations are indispensable in studying the impact of human activities on resource utilization and the ecological environment. Because the differences between datasets and their spatial distribution are still unclear, this has become a puzzle in data selection and application. This study is based on four mainstream spatialized population datasets: the History Database of the Global Environment version 3.2.000 (HYDE), Gridded Population of the World version 4 (GPWv4), Global Human Settlement Layer (GHSL), and WorldPop. In view of possible influences of geographical factors, this study analyzes the differences in accuracy of population estimation by computing relative errors and population spatial distribution consistency in different regions by comparing datasets pixel by pixel. The results demonstrate the following: (1) Source data, spatialization methods, and case area features affect the precision of datasets. As the main data source is statistical data and the spatialization method maintains the population in the administrative region, the populations of GPWv4 and GHSL are closest to the statistical data value. (2) The application of remote sensing, mobile communication, and other geospatial data makes the datasets more accurate in the United Kingdom, with rich information, and the absolute value of relative errors is less than 4%. In the Tibet Autonomous Region of China, where data are hard to obtain, the four datasets have larger relative errors. However, the area where the four datasets are completely consistent is as high as 84.73% in Tibet, while in the UK it is only 66.76%. (3) The areas where the spatial patterns of the four datasets are completely consistent are mainly distributed in areas with low population density, or with developed urbanization and concentrated population distribution. Areas where the datasets have poor consistency are mainly distributed in medium population density areas with high urbanization levels. Therefore, in such areas, a more careful assessment should be made during the data application process, and more emphasis should be placed on improving data accuracy when using spatialization methods. View Full-Text
Keywords: spatial population dataset; spatial distribution of population; difference; consistency spatial population dataset; spatial distribution of population; difference; consistency
►▼ Show Figures 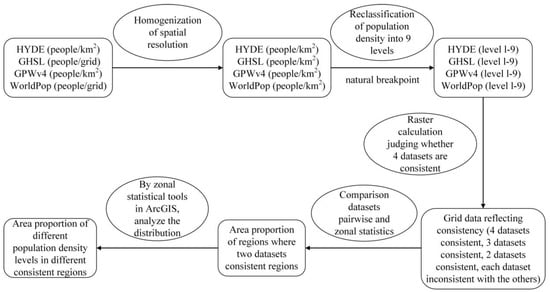