The current trend towards global urbanization presents new environmental and social challenges. For this reason, it is increasingly important to monitor urban growth, mainly in those regions undergoing the fastest urbanization, such as Southeast Asia. Hanoi (Vietnam) is a rapidly growing medium-sized city: since new economic policies were introduced in 1986, this area has experienced a rapid demographic rise and radical socio-economic transformation. In this study, we aim to map not only the recent urban expansion of Hanoi, but also of its surroundings. For this reason, our study area consists of the districts within a 30km radius of the city center. To analyze the rural–urban dynamics, we identified three hypothetical rings from the center: the core (within a 10 km radius), the first ring (the area between 10 and 20 km) and, finally, the outer zone (over 20 km). To map land use/land cover (LULC) changes, we classified a miniseries of Landsat images, collected approximately every ten years (1989, 2000, 2010 and 2019). To better define the urban dynamics, we then applied the following spatial indexes: the rate of urban expansion, four landscape metrics (the number of patches, the edge length, the mean patch area and the largest patch index) and the landscape expansion index. The results show how much the city’s original shape has changed over the last thirty years: confined for hundreds of years in a limited space on the right bank of the Red River, it is now a fringed city which has developed beyond the river into the surrounding periurban areas. Moreover, the region around Hanoi is no longer solely rural: in just thirty years, urbanization has converted this territory into an industrial and commercial region. View Full-Text
Keywords: rural–urban transition; Landsat imagery; LULC; periurbanization; Hanoi rural–urban transition; Landsat imagery; LULC; periurbanization; Hanoi
►▼ Show Figures 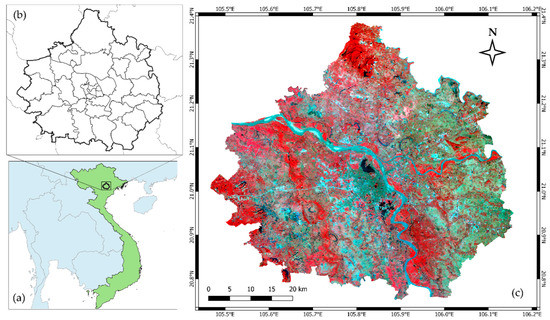