Quality of GNSS Traces from VGI: A Data Cleaning Method Based on Activity Type and User Experience
Next Article in Special Issue

More than half of the world’s populations now live in rapidly expanding urban and its surrounding areas. The consequences for Land Use/Land Cover (LULC) dynamics and Surface Urban Heat Island (SUHI) phenomena are poorly understood for many new cities. We explore this issue and their inter-relationship in the Kathmandu Valley, an area of roughly 694 km2, at decadal intervals using April (summer) Landsat images of 1988, 1998, 2008, and 2018. LULC assessment was made using the Support Vector Machine algorithm. In the Kathmandu Valley, most land is either natural vegetation or agricultural land but in the study period there was a rapid expansion of impervious surfaces in urban areas. Impervious surfaces (IL) grew by 113.44 km2 (16.34% of total area), natural vegetation (VL) by 6.07 km2 (0.87% of total area), resulting in the loss of 118.29 km2 area from agricultural land (17.03% of total area) during 1988–2018. At the same time, the average land surface temperature (LST) increased by nearly 5–7 °C in the city and nearly 3–5 °C at the city boundary. For different LULC classes, the highest mean LST increase during 1988–2018 was 7.11 °C for IL with the lowest being 3.18 °C for VL although there were some fluctuations during this time period. While open land only occupies a small proportion of the landscape, it usually had higher mean LST than all other LULC classes. There was a negative relationship both between LST and Normal Difference Vegetation Index (NDVI) and LST and Normal Difference Moisture Index (NDMI), respectively, and a positive relationship between LST and Normal Difference Built-up Index (NDBI). The result of an urban–rural gradient analysis showed there was sharp decrease of mean LST from the city center outwards to about 15 kms because the NDVI also sharply increased, especially in 2008 and 2018, which clearly shows a surface urban heat island effect. Further from the city center, around 20–25 kms, mean LST increased due to increased agriculture activity. The population of Kathmandu Valley was 2.88 million in 2016 and if the growth trend continues then it is predicted to reach 3.85 million by 2035. Consequently, to avoid the critical effects of increasing SUHI in Kathmandu it is essential to improve urban planning including the implementation of green city technologies. View Full-Text
Keywords: Land Use/Land Cover; NDBI; NDVI; NDMI; SUHI; urban–rural gradient; Kathmandu Valley; Nepal Land Use/Land Cover; NDBI; NDVI; NDMI; SUHI; urban–rural gradient; Kathmandu Valley; Nepal
►▼ Show Figures 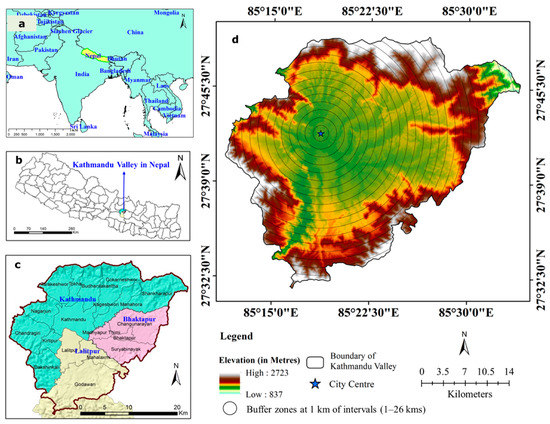