Landslides are one of the most detrimental geological disasters that intimidate human lives along with severe damages to infrastructures and they mostly occur in the mountainous regions across the globe. Landslide susceptibility mapping (LSM) serves as a key step in assessing potential areas that are prone to landslides and could have an impact on decreasing the possible damages. The application of the fuzzy best-worst multi-criteria decision-making (FBWM) method was applied for LSM in Austria. Further, the role of employing a few numbers of pairwise comparisons on LSM was investigated by comparing the FBWM and Fuzzy Analytical Hierarchical Process (FAHP). For this study, a wide range of data was sourced from the Geological Survey of Austria, the Austrian Land Information System, Humanitarian OpenStreetMap Team, and remotely sensed data were collected. We used nine conditioning factors that were based on the previous studies and geomorphological characteristics of Austria, such as elevation, slope, slope aspect, lithology, rainfall, land cover, distance to drainage, distance to roads, and distance to faults. Based on the evaluation of experts, the slope conditioning factor was chosen as the best criterion (highest impact on LSM) and the distance to roads was considered as the worst criterion (lowest impact on LSM). LSM was generated for the region based on the best and worst criterion. The findings show the robustness of FBWM in landslide susceptibility mapping. Additionally, using fewer pairwise comparisons revealed that the FBWM can obtain higher accuracy as compared to FAHP. The finding of this research can help authorities and decision-makers to provide effective strategies and plans for landslide prevention and mitigation at the national level. View Full-Text
Keywords: spatial decision support system; landslide; FAHP; FBWM; natural hazards; eastern Alps; Austria spatial decision support system; landslide; FAHP; FBWM; natural hazards; eastern Alps; Austria
►▼ Show Figures 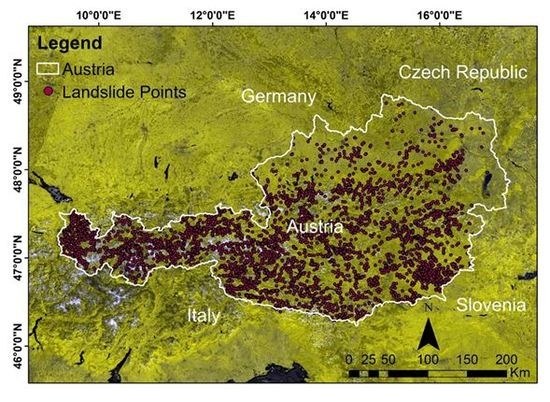