Map Metadata: the Basis of the Retrieval System of Digital Collections
Next Article in Special Issue

Zichang County is located within a longitude of 109°11′58′′E~110°01′22′′E and latitudes of 36°59′30′′N~37°30′00′′N (Figure 1). It belongs to the warm temperate semi-arid continental monsoon climate area with an annual average temperature of 9.1 °C and annual average precipitation of 514.7 mm. The study area has no obvious tectonic movements to transform it, and so it always maintains the characteristics of a stable sedimentary basin. The geomorphological types of the study area are more complicated. The soil and water loss around the beams and ridges are serious, accompanied by the development of a large number of landslides, collapses and other loess gravity landforms. The study area covers a variety of lithologies, such as loess, mudstone and sandstone, as shown in Table 1.

3.2. Preparation of Training and Validation Datasets

Landslide inventory and mapping is the foundation of landslide susceptibility mapping. In this study, the landslide survey data come from the following three methods: consulting the geological report of the study area; conducting a field survey with the help of the global positioning system (GPS); analyzing remote sensing images [38]. Finally, 263 landslides were identified in the study area, as shown in Figure 1. Rainfall and human engineering activities (engineering construction, urban construction and construction of highways and railways, etc.) are the main triggers of landslides [39], and loess landslide is the dominant type of landslide in the study area. Based on the analysis under GIS environment, the largest landslide in the study area is greater than 1 × 107 m3, and the smallest landslide is close to 120 m3. Each landslide polygon in the data set was expressed using the centroid. Furthermore, it is necessary to randomly select the same number of non-landslide points in the study area—defining 263 landslide pixels as “1”, and then defining 263 non-landslide pixels as “0”. In this study, the original data were randomly divided into training data set and validation data set with the ratio of 70/30, because today there is no uniform specification for the division of the data set in LSM [1,40].

The weights-of-evidence model is built from the logarithmic form of Bayes’ rule. The weighted values for the classes of landslide-affected factors can be written as in Equations (3) and (4) [60]: where P1 and P2, respectively, represent the number of pixels that appear and do not appear in the same given factor category. P3 represents the number of pixels that have no landslides in a particular factor category. When there is neither a landslide nor a landslide pixel in a particular factor category, P4 is used [61].
The positive weight (W +) not only indicates that the affecting factors leading to landslides exist, but also that the value reflects the positive correlation between the factors and landslides. The negative weight (W-) reflects the degree of negative correlation between them [60]. The difference between the two weights can be expressed as Equation (5): where C is the weight contrast. According to the value of C, the relationship between predictor variables and landslides can be reflected more comprehensively.

The model can be built by following a few steps: (i) collect examples; (ii) estimate the prior probability of each class; (iii) estimate the mean of the class; (iv) construct a covariance matrix and find the inverse and determinant for each class; (v) for each class formation, create a discriminant function [62]. The unique point of this model is that only a small amount of training data is required for evaluation and analysis to obtain the parameters required for classification [62]. More importantly, building a model is simple [63]. The NB method is widely and successfully used in landslide susceptibility evaluation research [12,32,64].

SysFor is built for a great many good quality decision trees by both low-dimensional and high-dimensional datasets and is applied to many applications [70]. A SysFor can be built by following a few steps: (i) follow the user’s instructions to find a set of “good properties” and corresponding split points; (ii) build the number of trees based on good attributes and user definitions; (iii) take the level 1 node of the tree built from step 2 and select an optional good attribute from the set of good attribute; (iv) return all the trees built in steps 2 and 3 as Sysfor [71].
This technique can be used to study a data set and master the mode of recording for the purpose of classifying a record as one of “class values”. Importantly, the model can predict the “class value” of an unknown tag. The model functions similar to decision trees and decision forests [72].

The landslide susceptibility map is the most direct and authoritative evidence to test the performance of the landslide susceptibility model [79]. Without model validation, the establishment of landslide susceptibility maps has no practical significance [24]. Therefore, the receiver operating characteristic (ROC) curve and the area under the curves (AUC) [80,81] are used to evaluate the predictive power of each model.
Figure 8a and Table 2 show the ROC curve and its parameters under the training data set, respectively. Under the training data set, the areas under the NB and Sysfor model curves were 0.792 (79.2%), 0.777 (77.7%) and 0.876 (87.6%), respectively. Figure 8b and Table 3 show the ROC curve and its parameters under the validation data set, respectively. In the validation data set, the areas under the NB, RBFNetwork and Sysfor model curves were 0.764 (76.4%), 0.729 (72.9%) and 0.783 (78.3%), respectively. In addition, evaluation statistics (MAE) are used to verify the model. The mean absolute error (MAE) is a measure of the difference between two continuous variables (predicted and observed values). The SysFor model has the smallest MAE value under training data (MAE = 0.245) and validation data (MAE = 0.320), indicating that the model also performs well in the prediction and observation comparison of landslide occurrence, as shown in Figure 9.
The Wilcoxon signed-rank test was used to determine the significance of the differences between the susceptibility models, where the main determinants were p and z. The test is used to determine whether there is a significant difference in the susceptibility model—whether the p value is less than the significance level (0.05), and whether the z value is within the range of the critical value (−1.96, + 1.96) [1]. It can be seen from the analysis in Table 4 that the performance difference between the SF model and the other two models (RBFN and NB model) is statistically significant. In contrast, for the NB and RBFNetwork model, the performance difference was not statistically significant.
Comparing the performance rankings of the models obtained under the training data set and the validation data set, it can be found that the performances of the models under the two sets of data have the same ordering—the Sysfor model has the highest accuracy (0.783), followed by the NB model (0.764) and RBFNetwork model (0.729). Other statistical methods show that the Sysfor model has a minimum standard error (SE) and a 95% confidence interval (CI).

Xinxiang Lei, Wei Chen and Binh Thai Pham contributed the conceptualization, data selection and preparation, software, method implementation and testing, formal analysis, interpretation of results and preparation of the final manuscript. All authors have read and agreed to the published version of the manuscript. 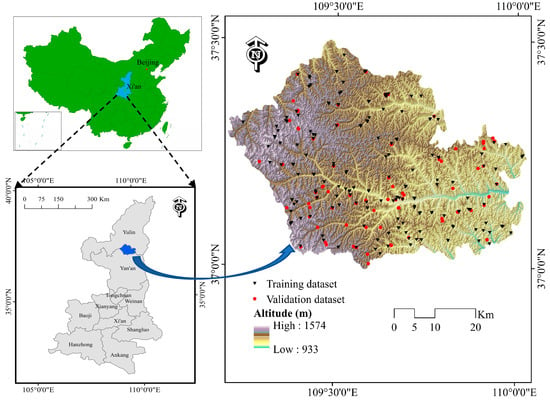 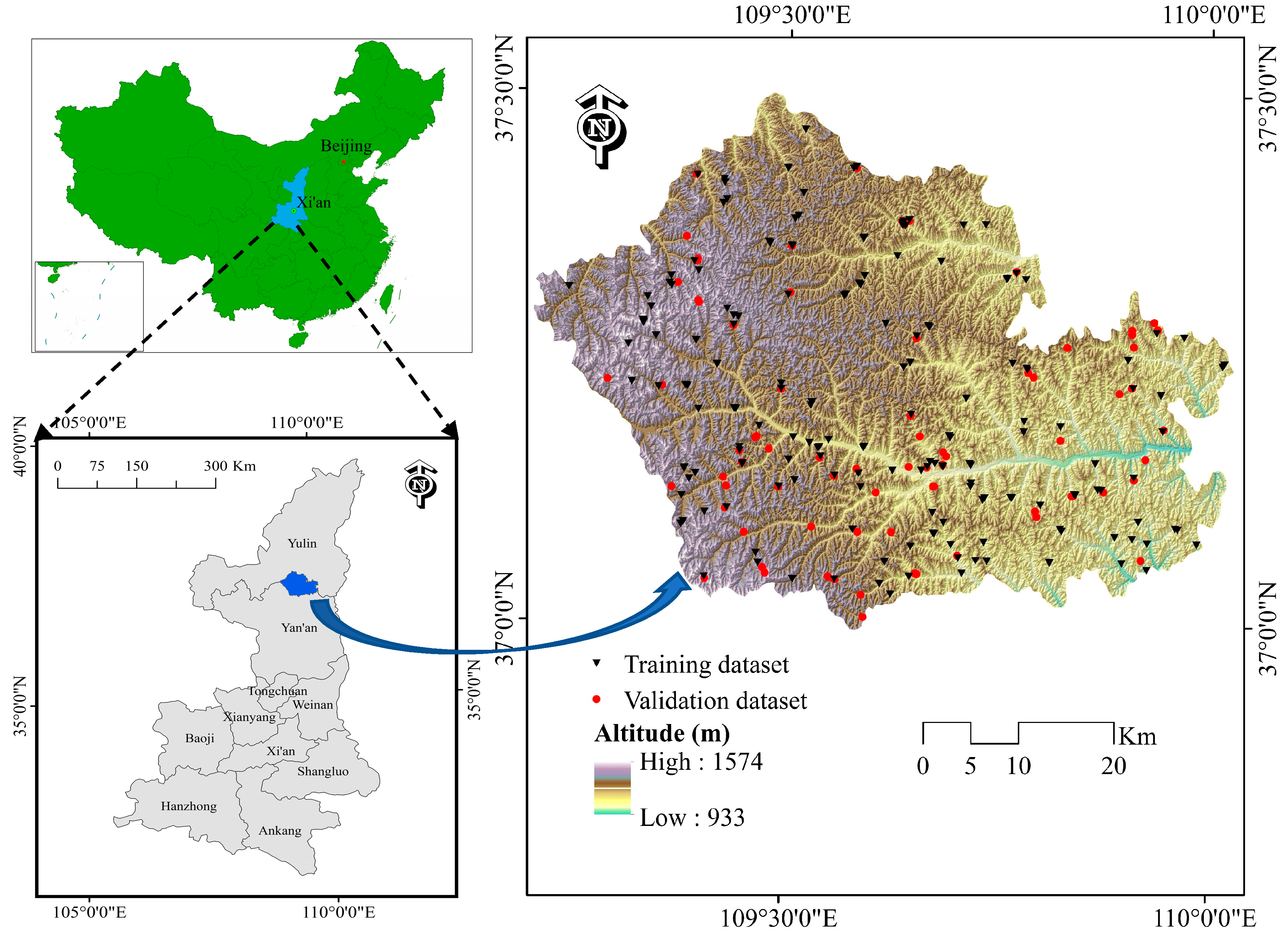 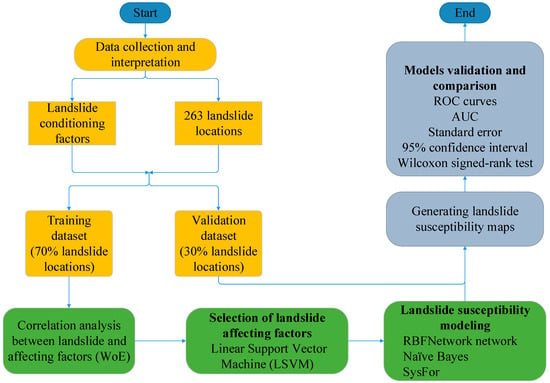 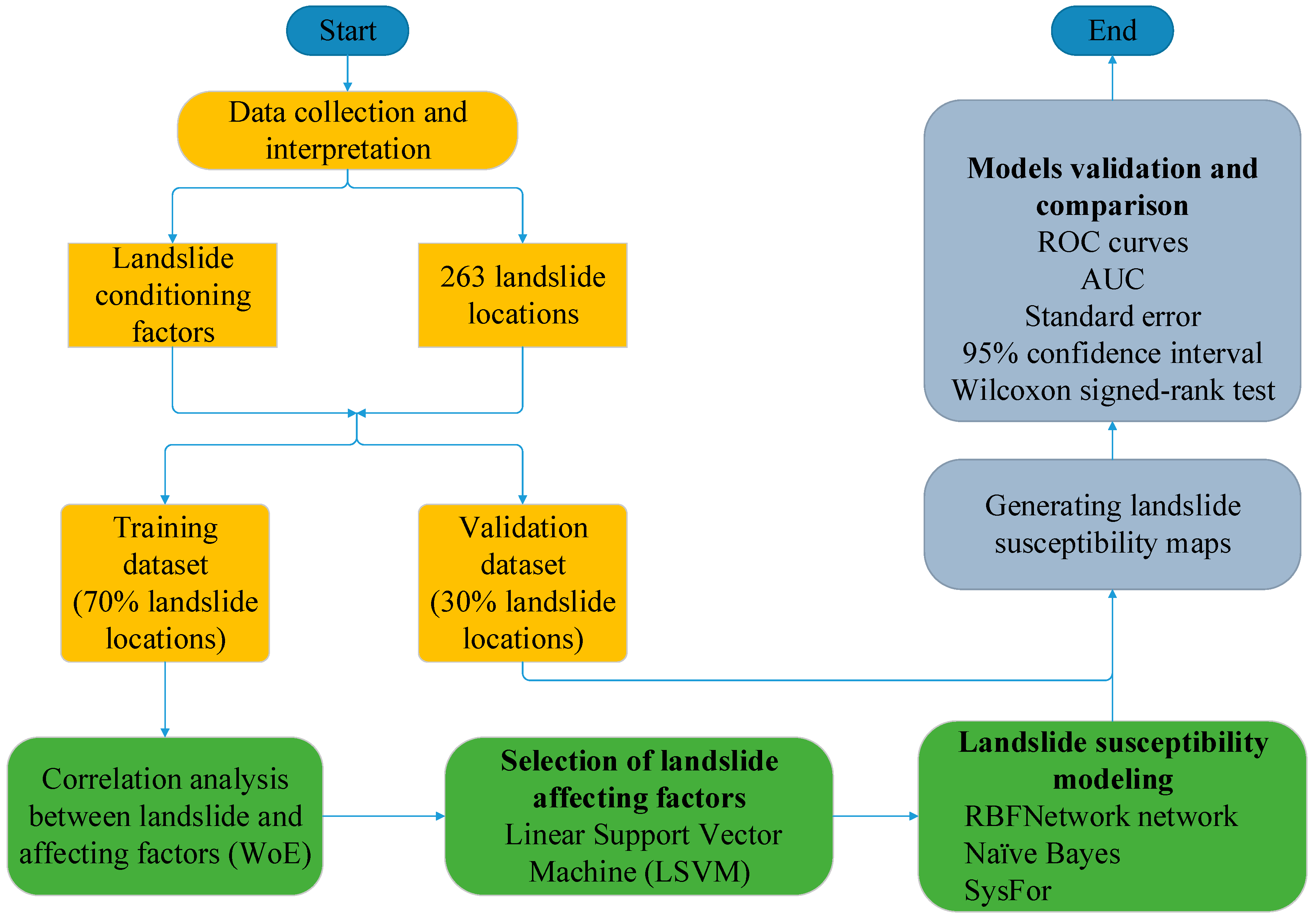 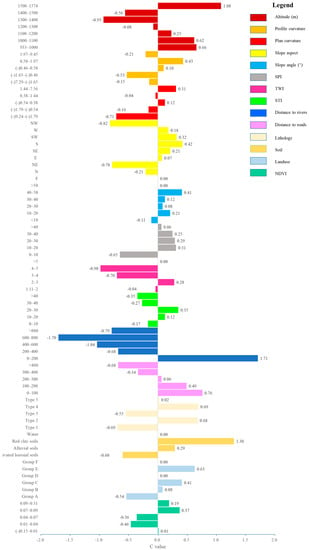 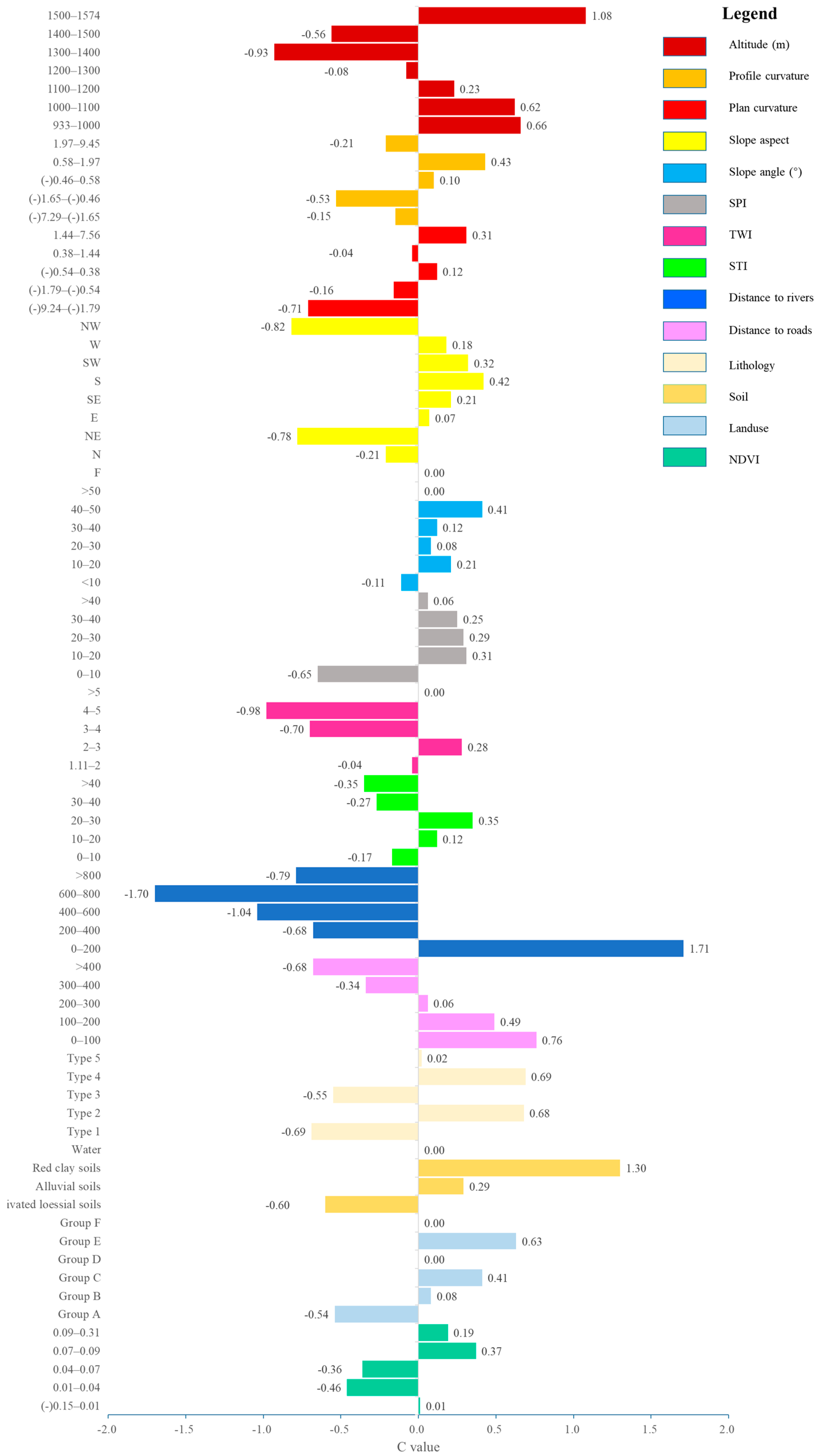 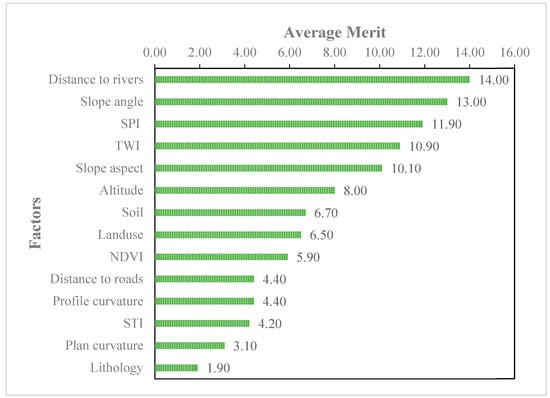 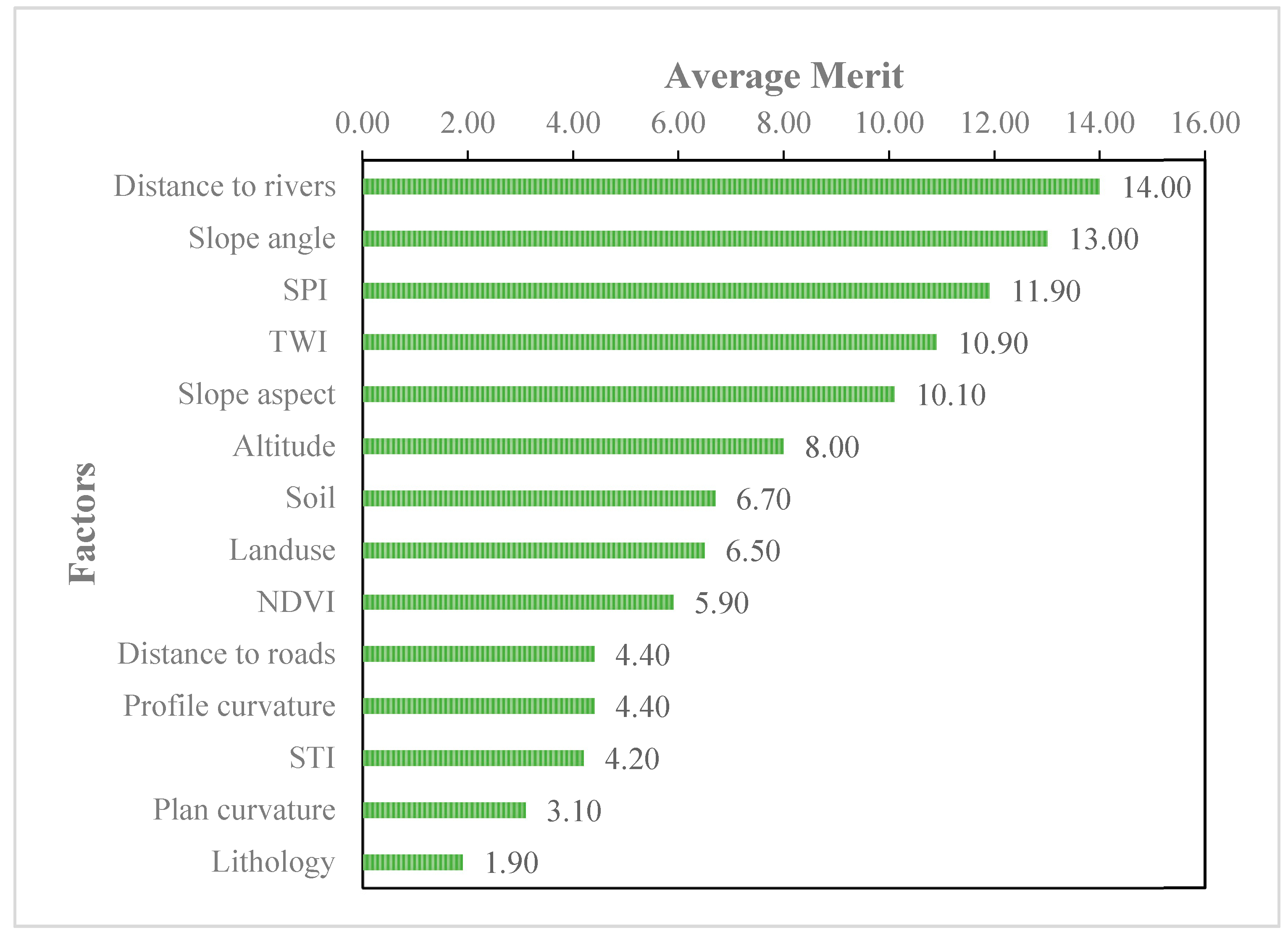 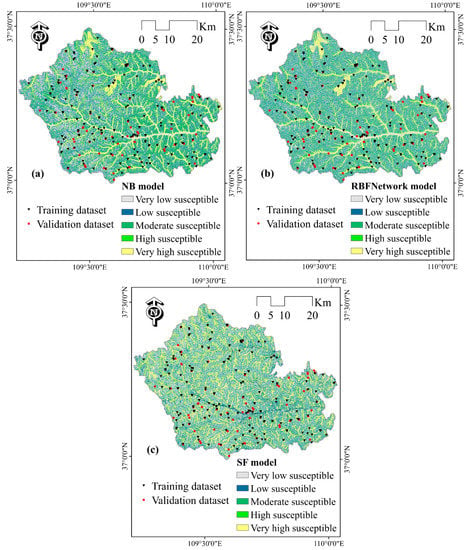 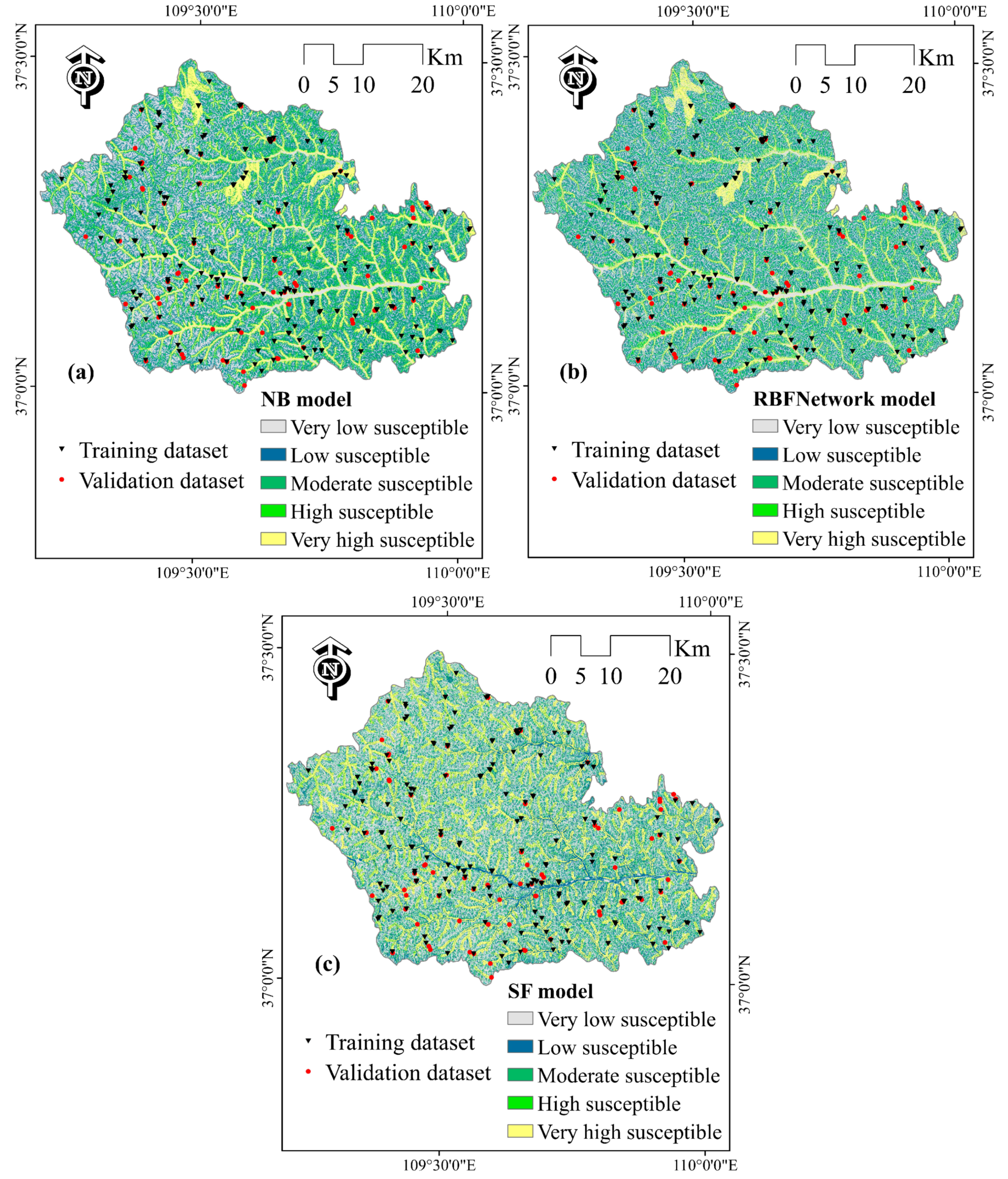 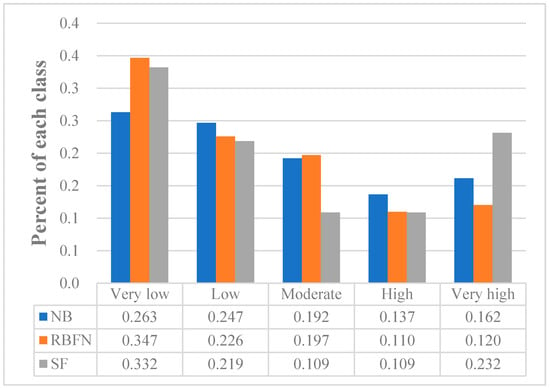 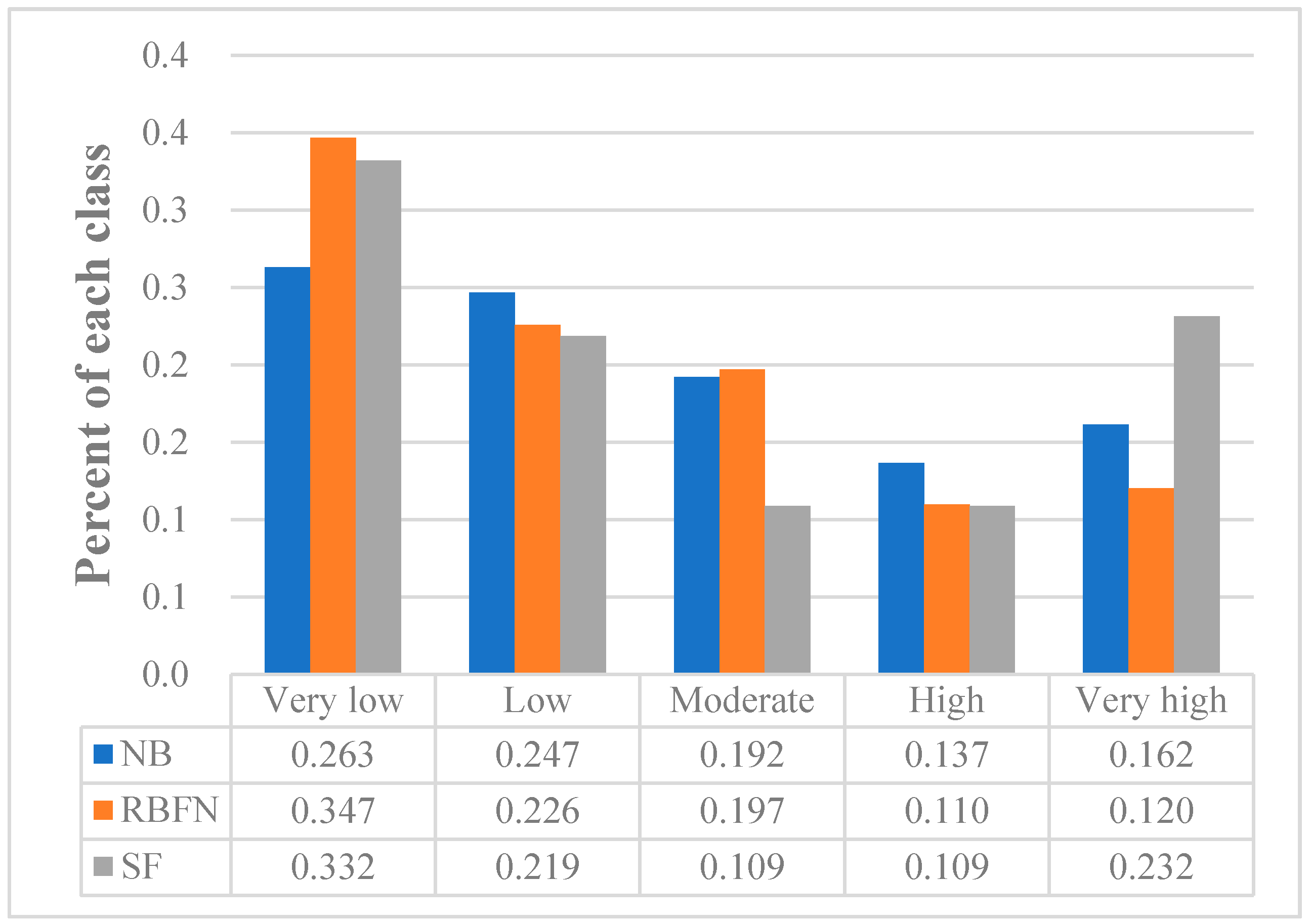 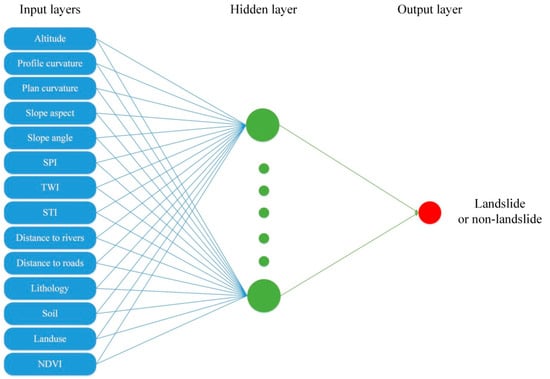 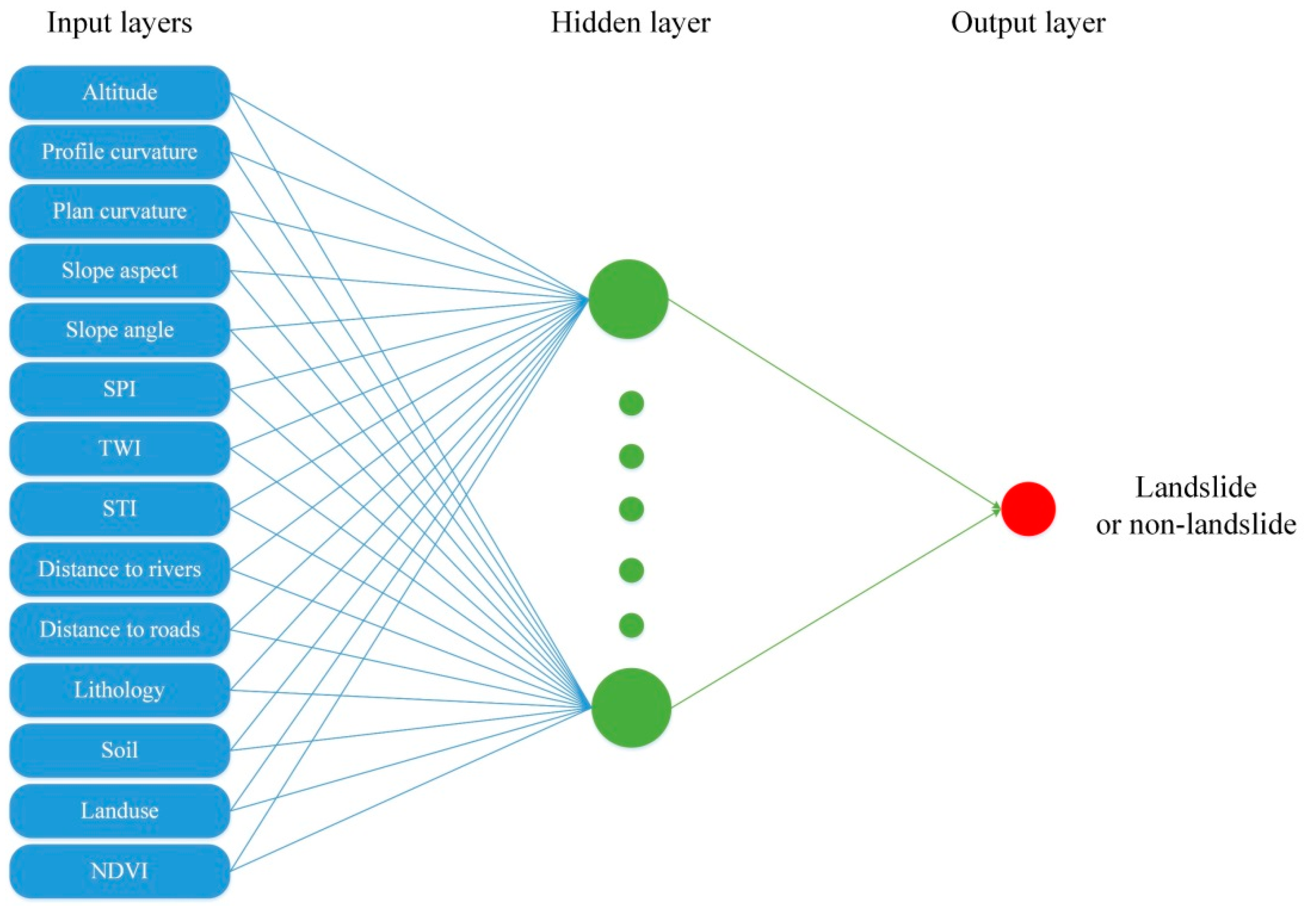 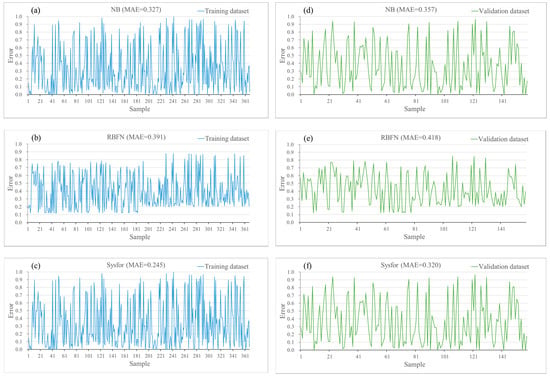 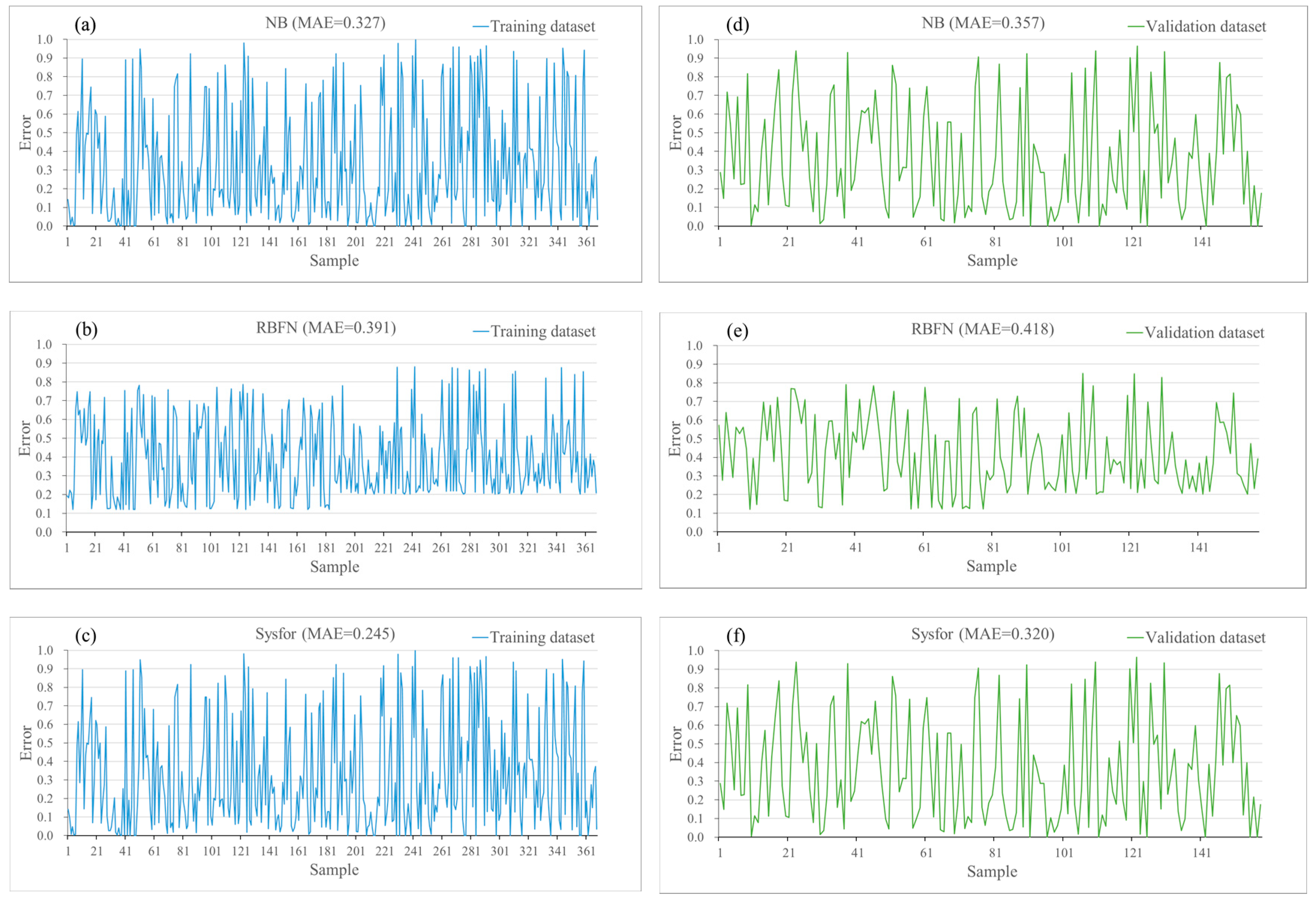