This paper proposes a flow-path-network-based (FPN-based) algorithm, constructed from a square-grid digital elevation model (DEM) to improve the simulation of the flow path curvature (C). First, the flow-path network model was utilized to obtain an FPN. Then, a flow-path-network-flow-path-curvature (FPN-C) algorithm was proposed to estimate C from the FPN. The experiments consisted of two sections: (1) quantitatively evaluating the accuracy using 5 m DEMs generated from the mathematical ellipsoid and Gauss models, and (2) qualitatively assessing the accuracy using a 30 m DEM of a real-world complex region. The three algorithms proposed by Evans (1980), Zevenbergen and Throne (1987), and Shary (1995) were used to validate the accuracy of the new algorithm. The results demonstrate that the C value of the proposed algorithm was generally closer to the theoretical C value derived from two mathematical surfaces. The root mean standard error (RMSE) and mean absolute error (MAE) of the new method are 0.0014 and 0.0002 m, reduced by 42% and 82% of that of the third algorithm on the ellipsoid surface, respectively. The RMSE and MAE of the presented method are 0.0043 and 0.0025 m at best, reduced by up to 35% and 14% of that of the former two algorithms on the Gauss surface, respectively. The proposed algorithm generally produces better spatial distributions of C on different terrain surfaces. View Full-Text
Keywords: digital elevation model (DEM); flow path curvature (C); flow-path-network-based (FPN-based); flow-path-network-flow-path-curvature (FPN-C); flow line digital elevation model (DEM); flow path curvature (C); flow-path-network-based (FPN-based); flow-path-network-flow-path-curvature (FPN-C); flow line
►▼ Show Figures 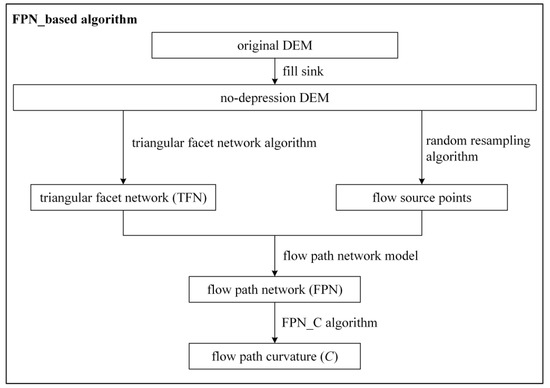