The plastid-nucleus located protein WHIRLY1 has been described as an upstream regulator of leaf senescence, binding to the promoter of senescence-associated genes like HvS40. To investigate the impact of WHIRLY1 on drought stress-induced, premature senescence, transgenic barley plants with an RNAi-mediated knockdown of the HvWHIRLY1 gene were grown under normal and drought stress conditions. The course of leaf senescence in these lines was monitored by physiological parameters and studies on the expression of senescence- and drought stress-related genes. Drought treatment accelerated leaf senescence in WT plants, whereas WHIRLY 1 knockdown lines (RNAi-W1) showed a stay-green phenotype. Expression of both senescence-associated and drought stress-responsive genes, was delayed in the transgenic plants. Notably, expression of transcription factors of the WRKY and NAC families, which are known to function in senescence- and stress-related signaling pathways, was affected in plants with impaired accumulation of WHIRLY1, indicating that WHIRLY1 acts as an upstream regulator of drought stress-induced senescence. To reveal the epigenetic indexing of HvS40 at the onset of drought-induced senescence in WT and RNAi-W1 lines, stress-responsive loading with histone modifications of promoter and coding sequences of HvS40 was analyzed by chromatin immunoprecipitation and quantified by qRT-PCR. In the wildtype, the euchromatic mark H3K9ac of the HvS40 gene was low under control conditions and was established in response to drought treatment, indicating the action of epigenetic mechanisms in response to drought stress. However, drought stress caused no significant increase in H3K9ac in plants impaired in accumulation of WHIRLY1. The results show that WHIRLY1 knockdown sets in motion a delay in senescence that involves all aspects of gene expression, including changes in chromatin structure. View Full-Text
Keywords: drought stress; epigenetics; histone modification; HvS40; leaf senescence; WHIRLY1 drought stress; epigenetics; histone modification; HvS40; leaf senescence; WHIRLY1
►▼ Show Figures 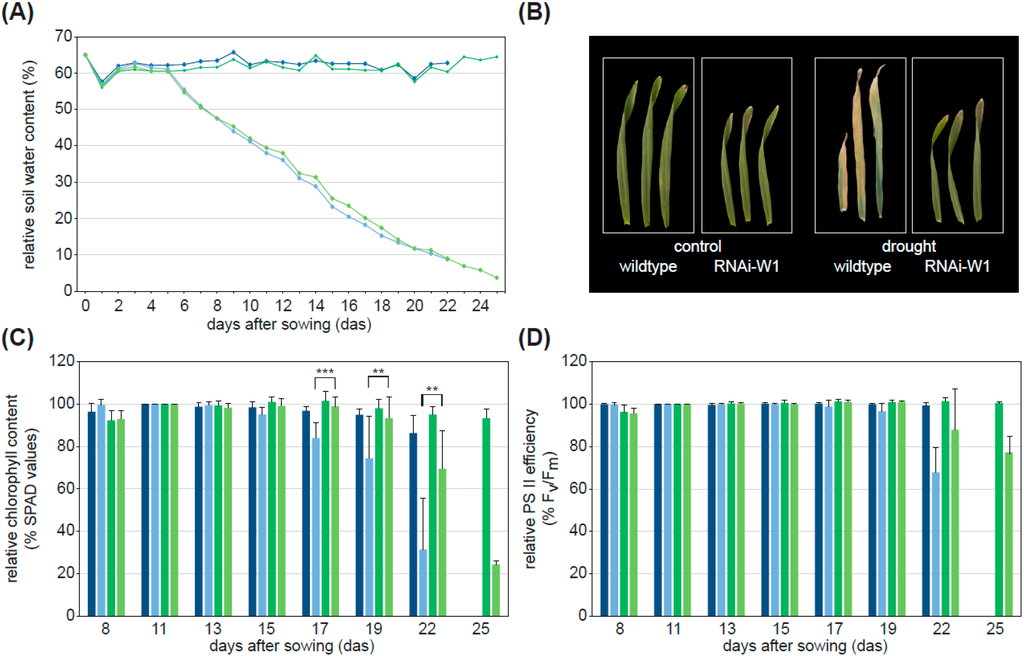