Searching for a Theory That Fits the Data: A Personal Research Odyssey
Previous Article in Special Issue

North et al. (1983) developed the two-dimensional Energy Balance Climate Model (hereafter EBCM) and Brock et al. (2013) considered their model with human relating forcing activity. The EBCM model recently provided by Brock et al. (2013) is given by where is the point on the surface, is the latitude and is the longitude, is effective local heat capacity per unit area, and is the Earth surface temperature at location and time t. By defining , incoming solar radiation hitting the surface of the Earth is , where Q is the solar constant divided by 4, is the mean annual meridional distribution of solar radiation, in which its integral from to 1 must be unity, and is the absorption coefficient or co-albedo function, which is one minus the albedo of the Earth–atmosphere system. Outgoing radiation is , which is determined by surface temperature and clouds.
As in Brock et al. (2013) who include atmospheric CO concentration in the EBCM model, I included an external radiative forcing component, , at specific location and time t in the model. Following Hansen et al. (2017), however, I employed the sum of well-mixed GHG, ozone, surface albedo, tropospheric aerosols, and solar irradiance, in order to represent Total Radiative Forcing (hereafter, TRF). Clearly, the included TRF reflects human-related activities that influence the climate. The diffusion term for all different forms of heat transport, is . The heat transport (divergence in heat flux) term, , is due to incoming absorbed radiant heat not matched by net outgoing radiation.
As explained in the data section, global temperature data are expressed as anomalies from the zero-base period.1 Regarding data characteristics, I consider the discretized EBCM model at specific location and time t as given by where instead of for simplicity and is the mean temperature at location during the zero-base period, . Note that the outgoing radiation term, , can be replaced with empirical formula, (Budyko 1969).2 Throughout this study, I consider the EBCM of the entire surface area of the Earth by integrating over (the Global Energy Balance Climate Model),
Note that the last term, , is assumed to be zero because heat transports (typically from low to high latitudes) are negated across the entire surface area of the Earth. Moreover, dividing on both sides of Equation (1) provides an interpretation that the global mean temperature anomaly is net incoming absorbed radiation across the globe plus TRF.
Although integrating divergence in heat flux across the globe is zero, there are spatial heterogeneities in net incoming absorbed radiation across the globe. Assuming a constant heat capacity (i.e., for all )3 in Equation (1) provides where and
Note that is the global mean temperature at time t, is the global mean temperature during the zero-base period, , and therefore is the global mean temperature anomaly at time t. Further, note that integrating local temperatures across provides a way for temperatures in low latitudes to carry more weight in calculating the global mean temperature , so that the increase in temperature at high latitudes due to divergence in heat flux from low to high latitudes, is roughly proportional to the temperature difference between high and low latitudes (Held and Suarez 1974 for one-dimensional EBCM model).
Equation (2) indicates that the spatially distributed TRF level along with different spatial characteristics over the Earth’s atmosphere, creates spatially heterogeneous warming effects. Consequently, the Global EBCM illustrates that spatially averaged net incoming absorbed radiation could be proportional to the global mean temperature anomaly we observed according to the data. More specifically, outgoing radiation to space is reduced by the TRF level at each location (greenhouse effect) and discrepancies between incoming radiation and outgoing radiation that is offset by exogenous forcing such as human and volcanic activity (without considering divergence in heat flux), generatetheirtorical global mean temperature anomaly data. In other words, the global mean temperature anomaly is determined by spatially heterogeneous net incoming absorbed radiation, which is a function of local temperatures, , as well as the TRF level in a complex way.
Notice that global climate change could be linked not only to ocean heat content, but also to the Top-of-Atmosphere (TOA) net energy imbalance. More specifically, the ocean absorbs more than 90 percent of excess energy inherited from human forcing (Loeb et al. 2012), and that clouds would enhance the anthropogenic influences by generating positive feedback (Fasullo and Trenberth 2012). Therefore, the Global EBCM should encompass the dynamics of both the change in TOA radiation and upper-ocean heating rate. Due to observational uncertainty and its complexity, however, I primarily focus on analyzing the Global EBCM (2) on the surface of the Earth.

The data presented in this study are available on request from the corresponding author. The data are not publicly available due to privacy. 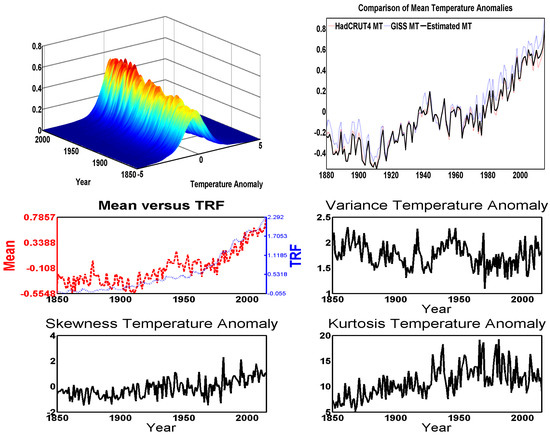 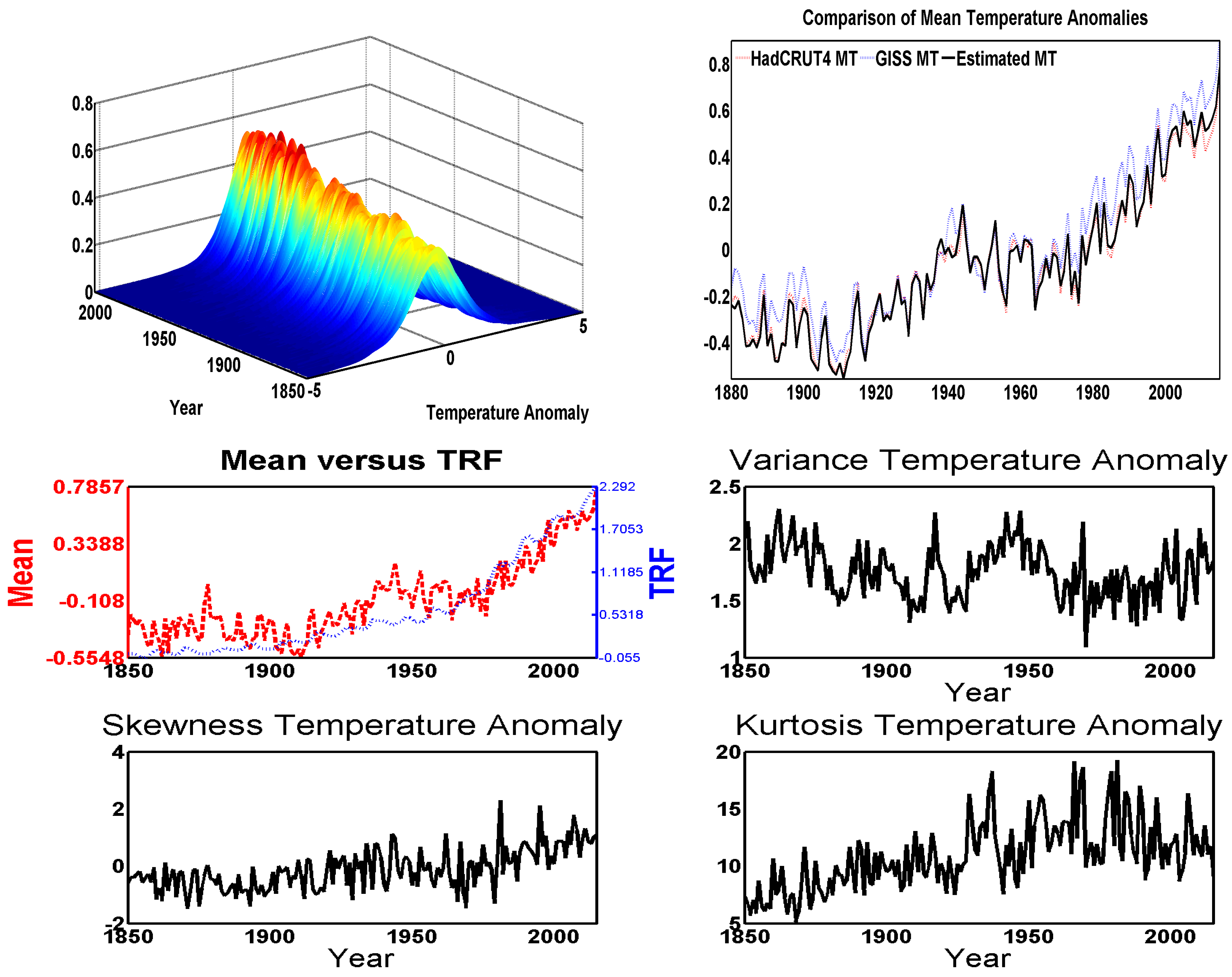 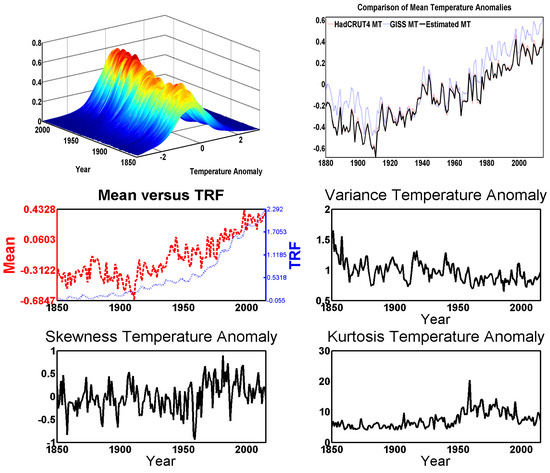 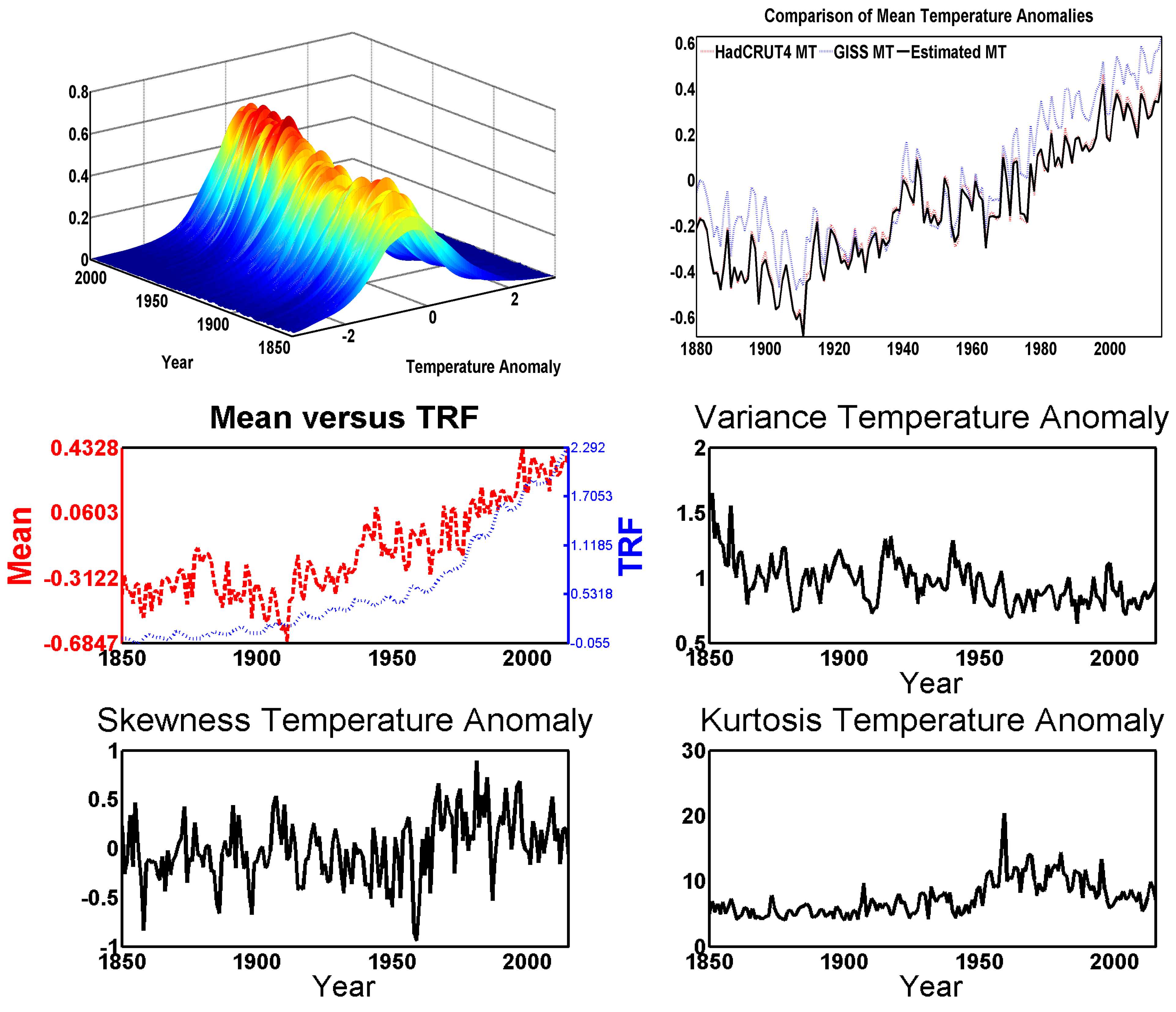 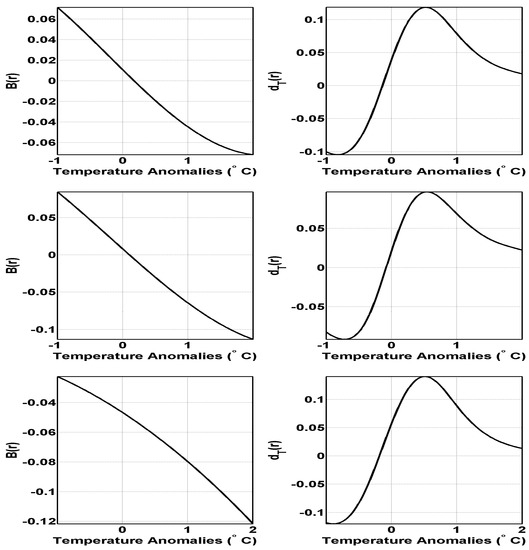 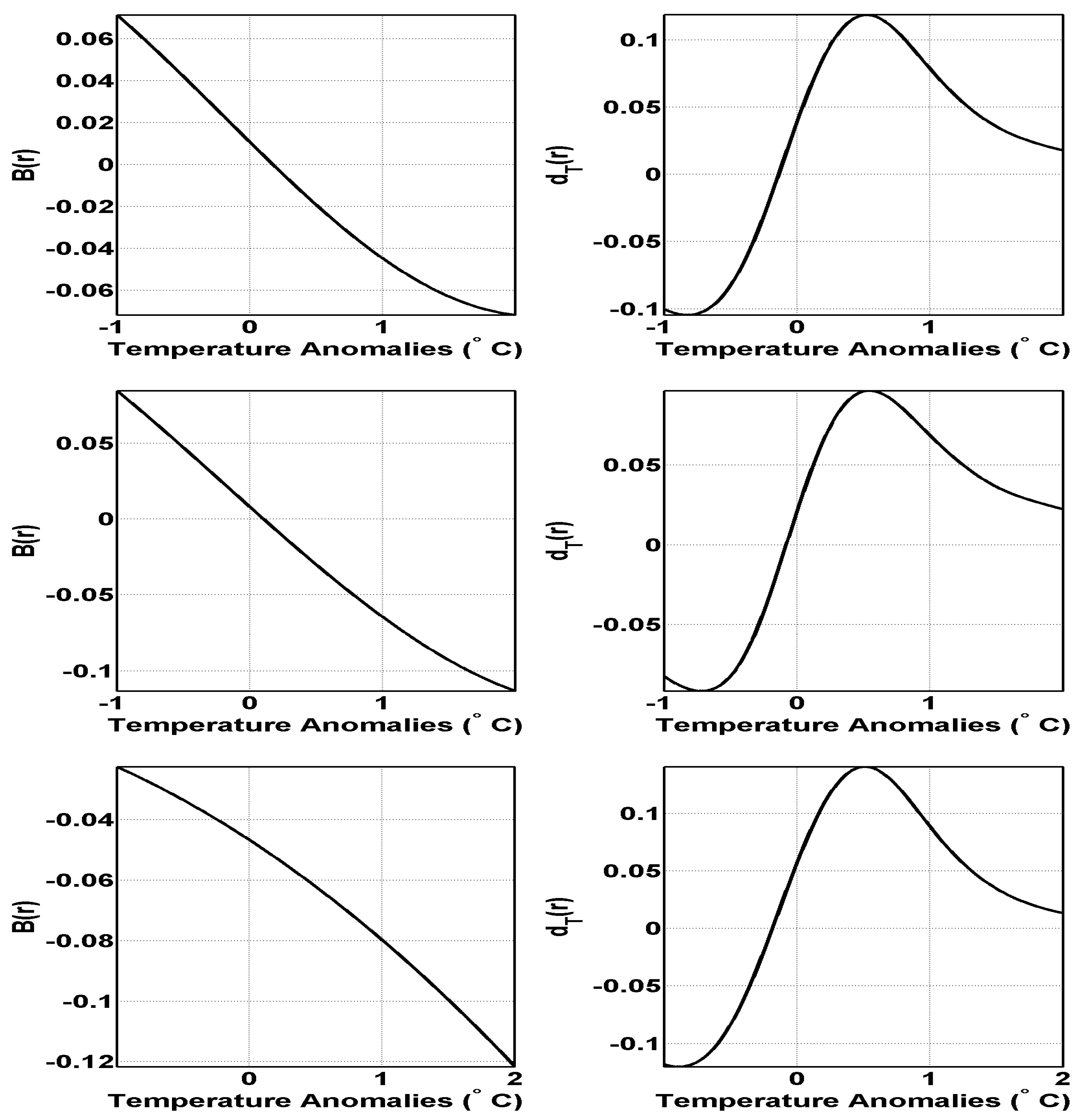 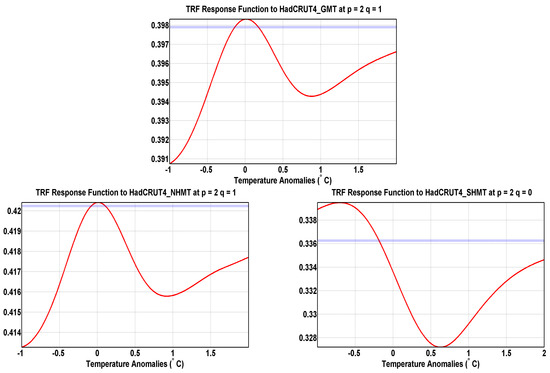 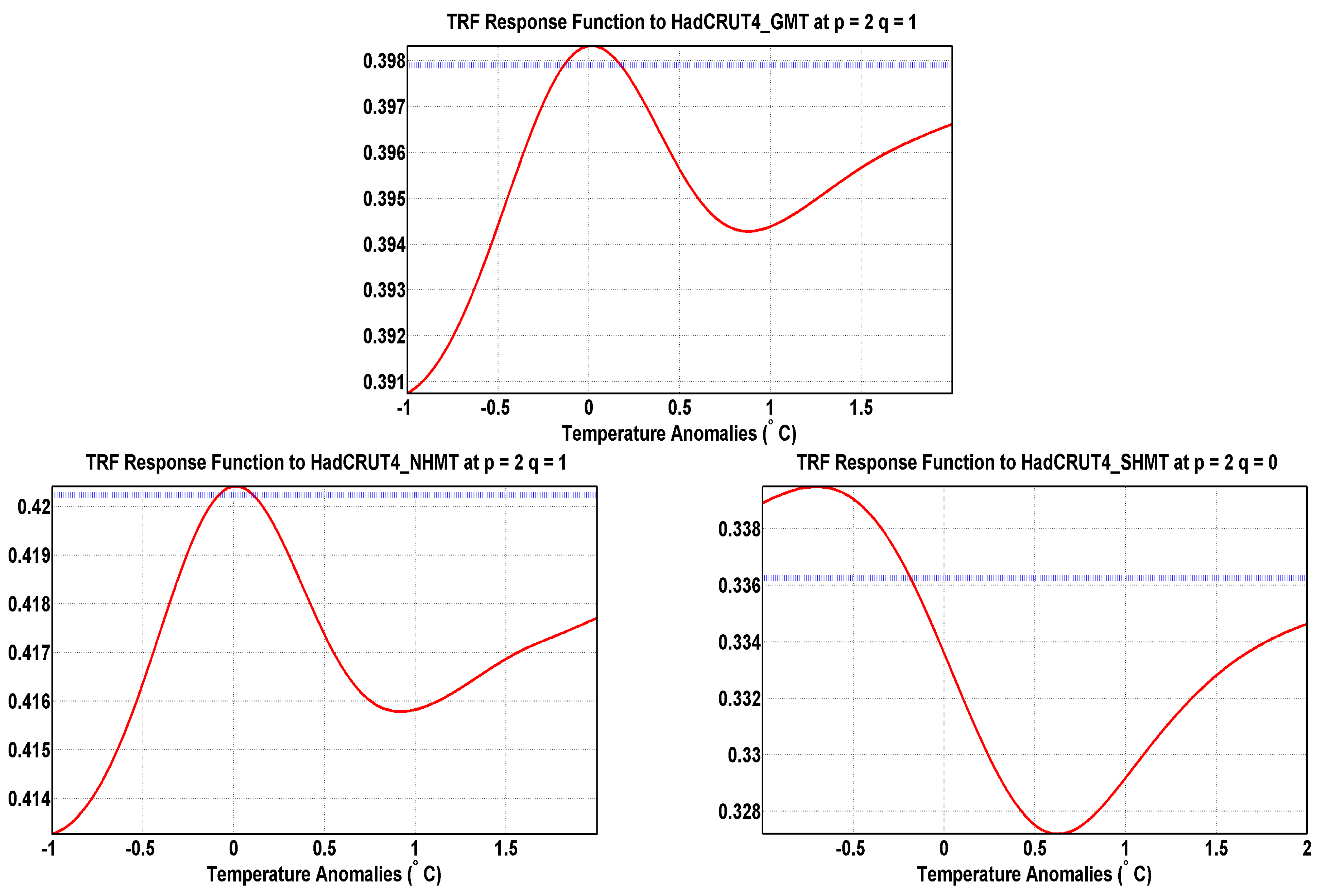 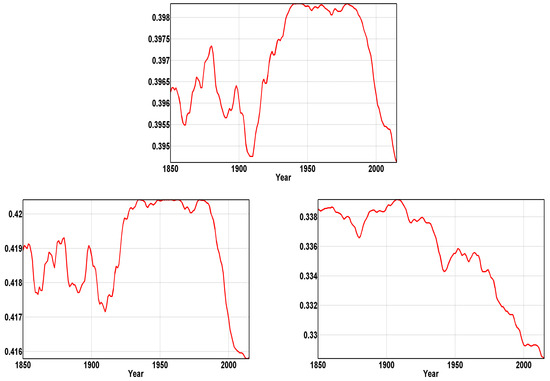 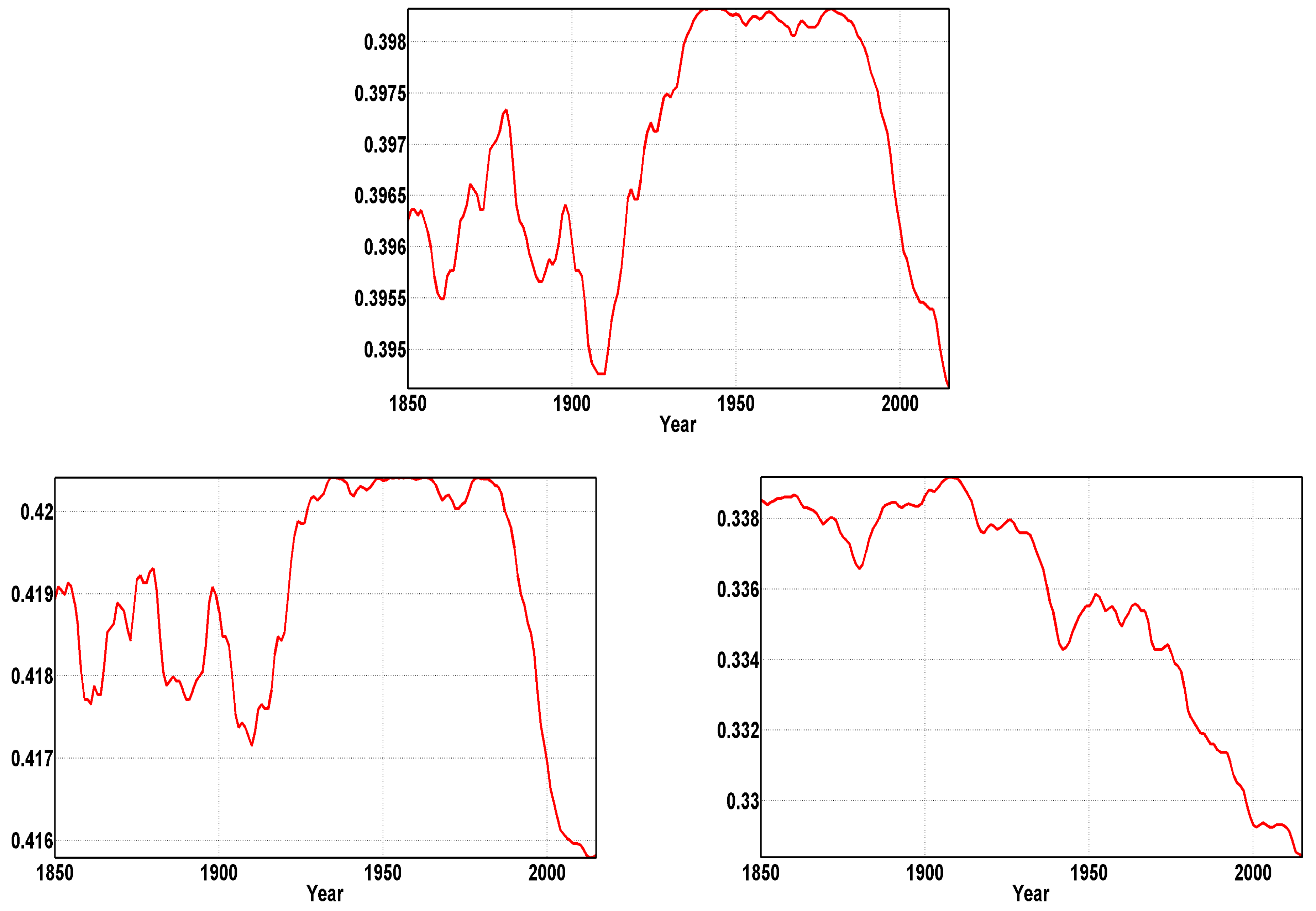 Table 1. Estimation results.
Table 1. Estimation results.
© 2021 by the author. Licensee MDPI, Basel, Switzerland. This article is an open access article distributed under the terms and conditions of the Creative Commons Attribution (CC BY) license (http://creativecommons.org/licenses/by/4.0/).
We use cookies on our website to ensure you get the best experience. Read more about our cookies here.
Accept
We have just recently launched a new version of our website. Help us to further improve by taking part in this short 5 minute survey here. here.
Never show this again