Submit to Climate Review for Climate 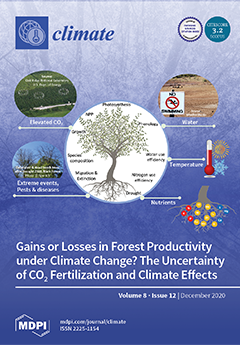 Cover Story (view full-size image): Considerable uncertainties remain regarding the impacts and interplay of temperature, precipitation, and elevated atmospheric CO2 (eCO2) on forest growth and productivity—especially due the long lifespans of trees. Other uncertainties stem from the different responses of forest ecosystems and underlying ecophysiological processes. The NPP of beech and fir was notably to be stimulated by eCO2 until 2035–2060. This stimulation was gradually cancelled out by climate effects (temperature increase and precipitation decrease) accompanied by increased mortality. Forest management (FM) may still be possible in the more climate-risky sub-mountainous belt of the Black Forest, but major losses in productivity can be expected. Under the most pessimistic scenario, FM may become critical where a substantial transition on the ecological and economic levels becomes inevitable. View this paper.
Previous Issue
Volume 8, November
Next Issue
Volume 9, January
We use cookies on our website to ensure you get the best experience. Read more about our cookies here.
Accept
We have just recently launched a new version of our website. Help us to further improve by taking part in this short 5 minute survey here. here.
Never show this again