The crisis conflicts in Syria have forced a lot of people to relocate and live in mainland Greece, where they are hosted in refugee camps. In the present study, our aim was to assess child morbidity and overall disease burden in two camps in northern Greece during a six-month winter period. A primary health care office was founded in each camp. Refugees of all ages with health problems were examined daily by specialty doctors. Cases were classified into two categories: Infectious or non-infectious. In total, 2631 patients were examined during this period (out of the 3760 refugees hosted). Of these patients, 9.8% were infants, 12.7% were toddlers, and 13.4% were children. Most of the visits for children aged less than 12 years old were due to infectious diseases (80.8%). The most common sites of communicable diseases among children were the respiratory tract (66.8%), the skin (23.2%), and the urinary (3.2%) and gastrointestinal tracts (6.2%). Non-communicable diseases were mostly due to gastrointestinal (20.2%), respiratory (18.2%), surgical (13.1%), and allergic (10.3%) disorders. Infants, toddlers, and children suffered more frequently from respiratory infections, while in adolescents and adults, non-infectious diseases were more common. Toddlers and children were more likely to fall ill in comparison to infants. Conclusions: During the winter period, infectious diseases, especially of the respiratory tract, are the main reason for care seeking among refugees in Greek camps, with toddlers suffering more than other age groups. The overall mortality and referral percentage were low, indicating that adequate primary care is provided in this newly established refugee hosting model. View Full-Text
Keywords: child morbidity; disease burden; refugee crisis child morbidity; disease burden; refugee crisis
►▼ Show Figures 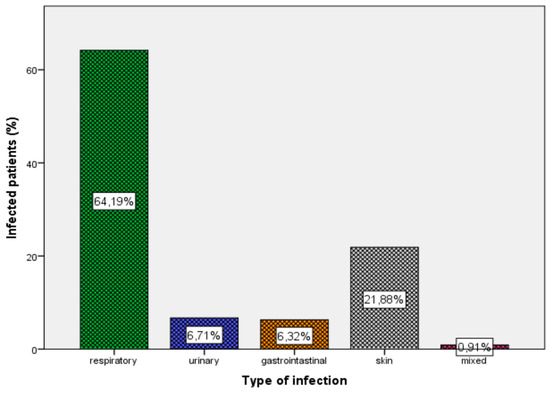