The current guidelines recommend the use of 100% O2 during resuscitation of a neonate requiring chest compressions (CC). Studies comparing 21% and 100% O2 during CC were conducted in postnatal models and have not shown a difference in incidence or timing of return of spontaneous circulation (ROSC). The objective of this study is to evaluate systemic oxygenation and oxygen delivery to the brain during CC in an ovine model of perinatal asphyxial arrest induced by umbilical cord occlusion. Pulseless cardiac arrest was induced by umbilical cord occlusion in 22 lambs. After 5 min of asystole, lambs were resuscitated with 21% O2 as per Neonatal Resuscitation Program (NRP) guidelines. At the onset of CC, inspired O2 was either increased to 100% O2 (n = 25) or continued at 21% (n = 9). Lambs were ventilated for 30 min post ROSC and FiO2 was gradually titrated to achieve preductal SpO2 of 85–95%. All lambs achieved ROSC. During CC, PaO2 was 21.6 ± 1.6 mm Hg with 21% and 23.9 ± 6.8 mm Hg with 100% O2 (p = 0.16). Carotid flow was significantly lower during CC (1.2 ± 1.6 mL/kg/min in 21% and 3.2 ± 3.4 mL/kg/min in 100% oxygen) compared to baseline fetal levels (27 ± 9 mL/kg/min). Oxygen delivery to the brain was 0.05 ± 0.06 mL/kg/min in the 21% group and 0.11 ± 0.09 mL/kg/min in the 100% group and was significantly lower than fetal levels (2.1 ± 0.3 mL/kg/min). Immediately after ROSC, lambs ventilated with 100% O2 had higher PaO2 and pulmonary flow. It was concluded that carotid blood flow, systemic PaO2, and oxygen delivery to the brain are very low during chest compressions for cardiac arrest irrespective of 21% or 100% inspired oxygen use during resuscitation.
Keywords: inspired oxygen; oxygen delivery; chest compression; neonatal resuscitation inspired oxygen; oxygen delivery; chest compression; neonatal resuscitation

This study was approved by the Institutional Animal Care and Use Committee at the State University of New York at Buffalo (Protocol #PED10085N, approved 5 October 2018). Twenty-two time-dated term (139–141-day gestation) pregnant ewes were obtained from May Family Enterprises (Buffalo Mills, PA, USA). Following an overnight fast, the ewes were induced for anesthesia with intravenous diazepam and ketamine. They were intubated with a 10.0 mm-cuffed endotracheal tube (ETT) and ventilated with 21% oxygen and 2–3% isoflurane at 16 breaths/min. The ewes were continuously monitored with a pulse oximeter and an end-tidal CO2 (EtCO2) monitor [9,10]. Following cesarean section, fetal lambs were partially exteriorized and intubated with a 4.5 mm-cuffed ETT as previously described [11]. The fetal lung fluid in the ETT was drained passively by gravity by tilting the head to the side and, thereafter, the ETT was occluded to prevent gas exchange during gasping in the asphyxial period. Catheters were inserted into the jugular vein (for fluid and medication administration) and right carotid artery (for blood sampling). A 2-mm flow probe (Transonic Systems Inc., Ithaca, NY, USA) was placed around the left carotid artery. A left thoracotomy was performed and a 4-mm flow probe was placed around the left pulmonary artery. The thoracotomy was closed in layers. Electrocardiogram (EKG) leads were attached at the right axilla, left axilla, and right inguinal area (three-lead EKG). The ECG100C (Biopac Systems, Inc., Goleta, CA, USA) was used with Acknowledge Software to record tracings of leads I, II, and III. Following instrumentation, the umbilical cord was occluded and then cut, and the lambs were moved from the maternal abdomen to the radiant warmer. During the asphyxial period (prior to resuscitation), umbilical arterial and low umbilical venous catheters were inserted to measure continuous invasive blood pressures and for epinephrine administration, respectively.
Lambs from three different experimental protocols that followed the Neonatal Resuscitation Program (NRP) algorithm were used: two studies evaluating optimal flush volume with epinephrine and early cord clamping utilized 100% oxygen during chest compressions; one study generating preliminary data for a postnatal hypothermia trial that utilized 21% oxygen. The lambs were grouped based on the O2 administered during chest compressions: (1) 21% inspired O2 or (2) 100% inspired O2. The protocol for cardiac arrest, timing of epinephrine, and dose of epinephrine were similar between the two groups.
A five-minute period of cardiac arrest was observed prior to initiating resuscitation to minimize chances of ROSC with positive pressure ventilation (PPV) alone. Cardiac arrest was defined by the absence of carotid blood flow, arterial blood pressure, and audible heart rate. Resuscitation began by providing PPV with 21% O2 by means of a T-piece resuscitator at a rate of 40 breaths/min and initial pressures of 35/5 cm H2O. Peak inspiratory pressure (PIP) was adjusted as needed to obtain adequate chest rise. Chest compressions were initiated after 30 s of effective ventilation using a two thumb technique at a 3:1 (chest compression:ventilation) ratio and a depth of one-third anterior–posterior diameter. Upon initiation of chest compressions, inspired O2 was continued at 21% or increased to 100% depending on the protocol. The first dose of epinephrine (0.03 mg/kg) was administered if return of spontaneous circulation (ROSC) had not been achieved at 1 min after coordinated chest compressions along with positive pressure ventilation, and every three minutes thereafter until ROSC or for a total of four doses. The ROSC was defined by a heart rate > 60 beats/min with a systolic blood pressure of >30 mm Hg. A baseline arterial blood sample was obtained following instrumentation of the lamb prior to cord occlusion with additional samples at the time of cardiac arrest. Thereafter, blood gases were obtained approximately every minute during resuscitation, at ROSC, and every minute until fifteen minutes following ROSC, followed by every 5 min until 30 min after ROSC. Arterial blood samples were analyzed immediately using a radiometer blood gas analyzer (ABL 800 FLEX, Radiometer A/S, Bronshoj, Denmark).
Following ROSC, the lambs were placed on a ventilator. The PIP and rate were adjusted gradually based on tidal volumes (goal 8–9 mL/kg) and PaCO2, and the fraction of inspired oxygen (FiO2) was adjusted to maintain pre-ductal saturations between 85–95%. Hemodynamic parameters were continuously monitored. Lambs were euthanized by administering 100 mg/kg pentobarbital sodium (Fatal-Plus Solution; Vortech Pharmaceuticals, Dearborn, MI, USA) at the completion of the study.

Our results demonstrate very low pulmonary and carotid flows during chest compressions for cardiac arrest. In fact, it appears blood flow is intermittent to these essential organs. The preductal PaO2 values are low and similar to fetal baseline levels and did not differ between 21% and 100% oxygen groups, probably secondary to low pulmonary blood flow. We did not demonstrate a difference in oxygen delivery to the brain with 21% and 100% oxygen. These findings neither support nor refute current recommendations to provide supplemental 100% oxygen during chest compressions.
However, following ROSC, lambs that received 100% oxygen had post-asphyxial increased carotid blood flow and hyperoxia in spite of rapid weaning of FiO2 over the first 5 min after ROSC. Further studies evaluating abrupt decrease in inspired oxygen concentration to 21–30% immediately after achieving ROSC need to be evaluated to minimize the risk of hyperoxic reperfusion injury to the brain.

Systemic and pulmonary hypoperfusion is common during chest compressions in cardiac arrest and brain oxygen delivery is extremely low irrespective of the concentration of inspired oxygen levels. Future randomized and masked studies that compare low vs. high supplemental oxygen during newborn resuscitation with chest compressions for cardiac arrest and bradycardia are needed to assess markers of oxidative stress, as well as assess immunohistochemical changes in the brain to provide a better understanding on the optimal oxygen therapy during resuscitation of newborns.

We thank the Canadian Paediatric Society and American Academy of Pediatrics for awarding us the NRP Young Investigator Award.

The authors have no conflicts of interest to disclose. 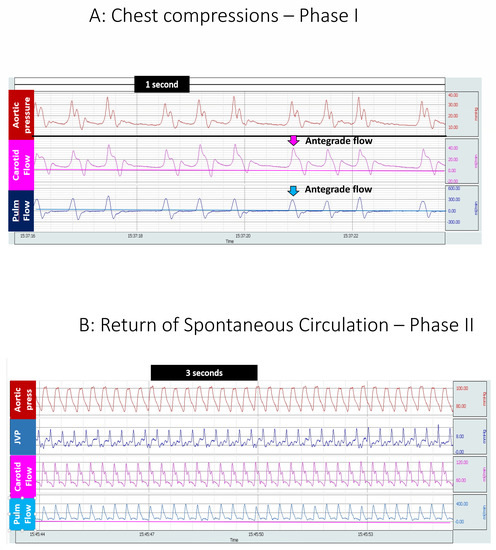 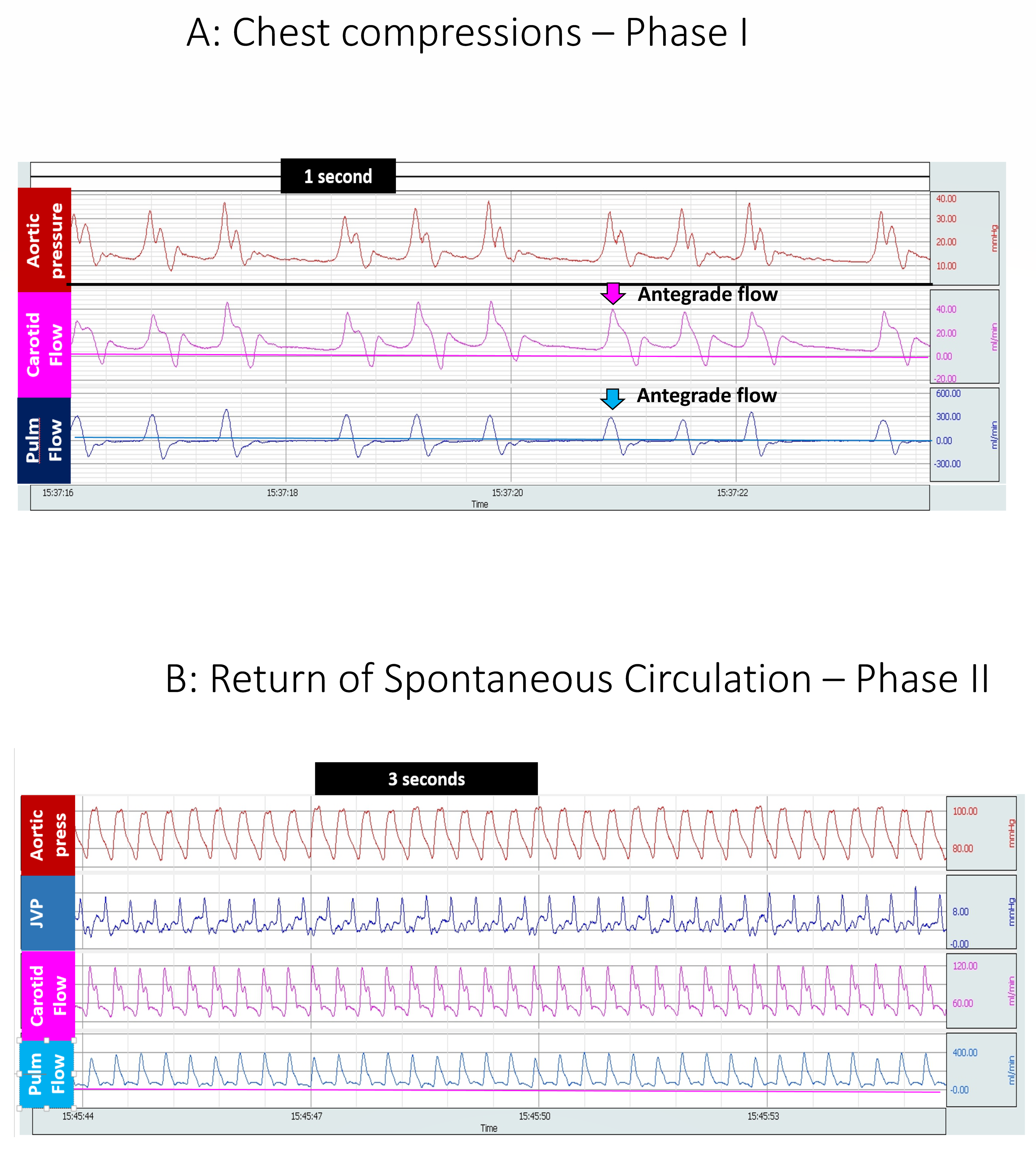 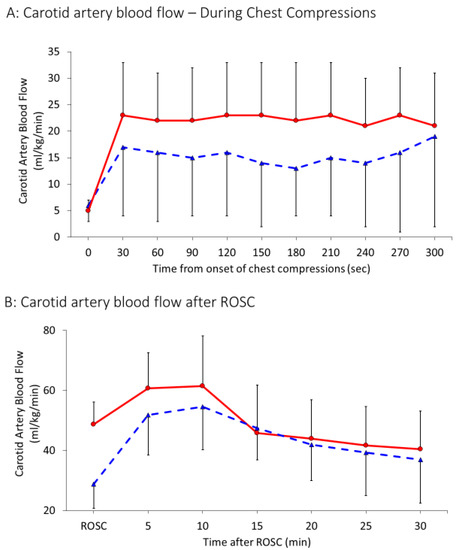 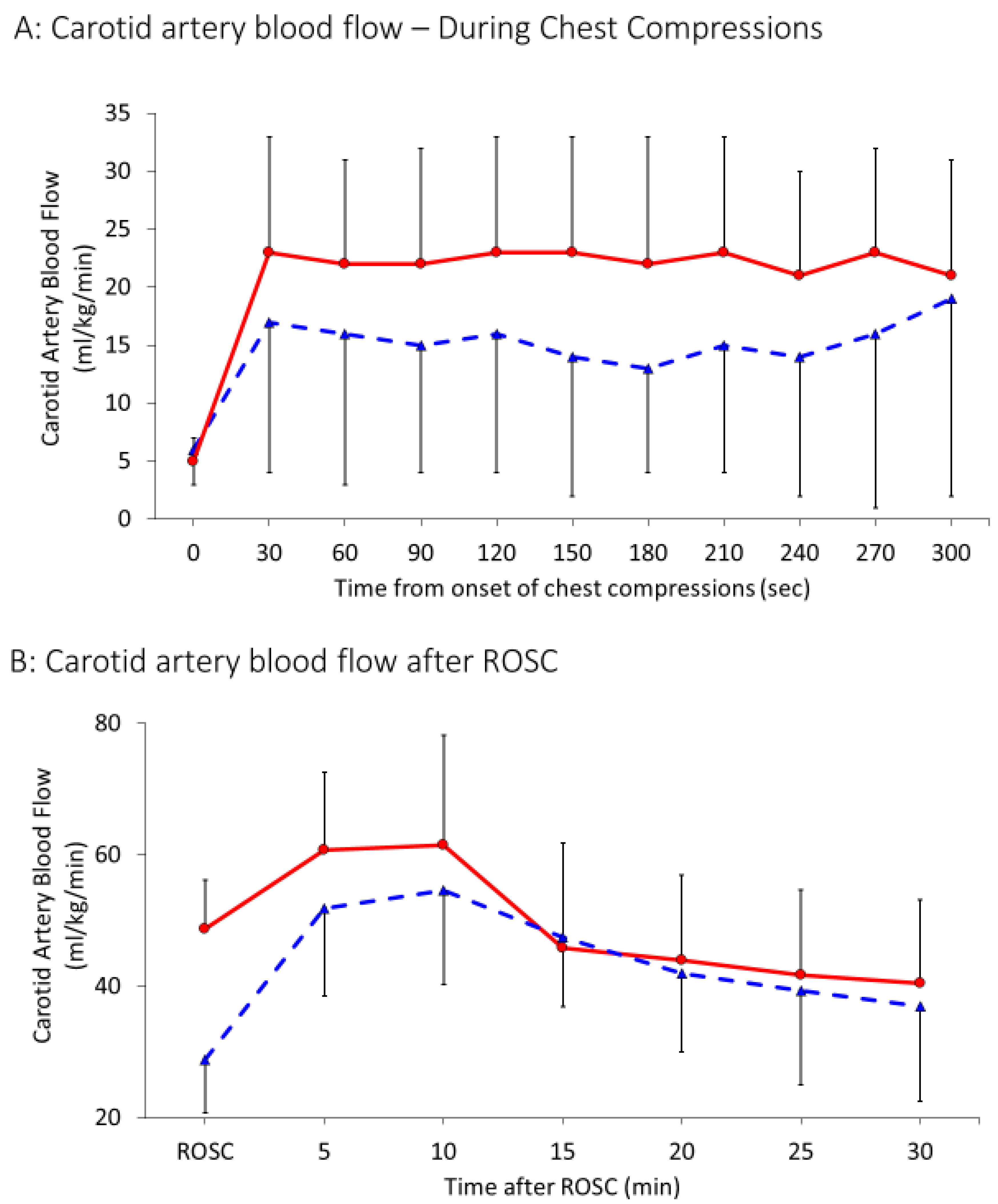 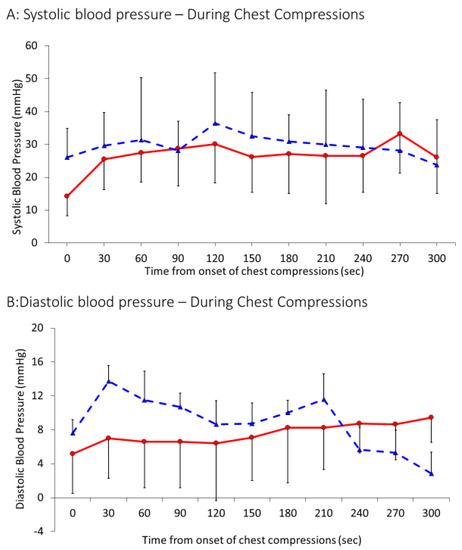 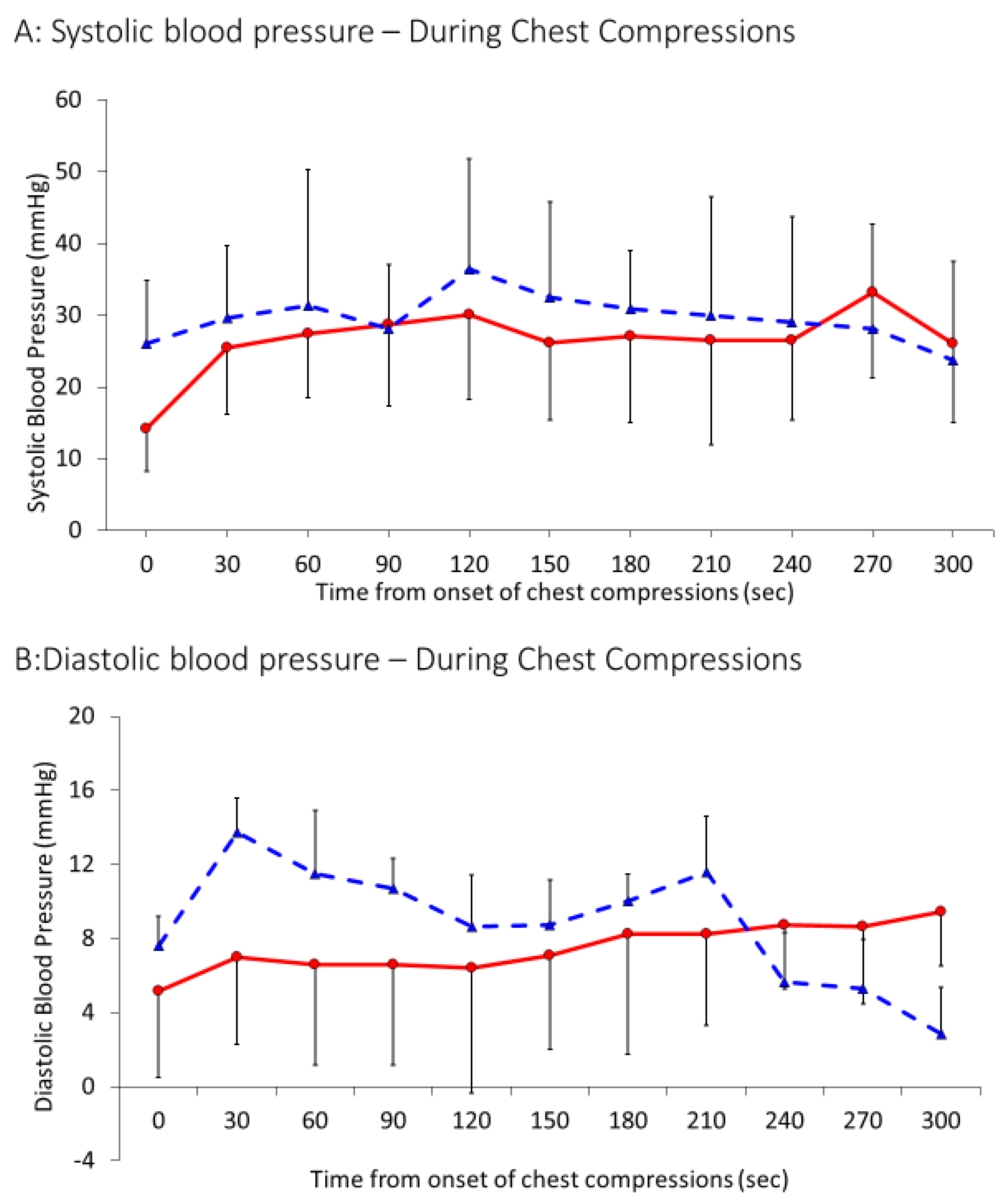 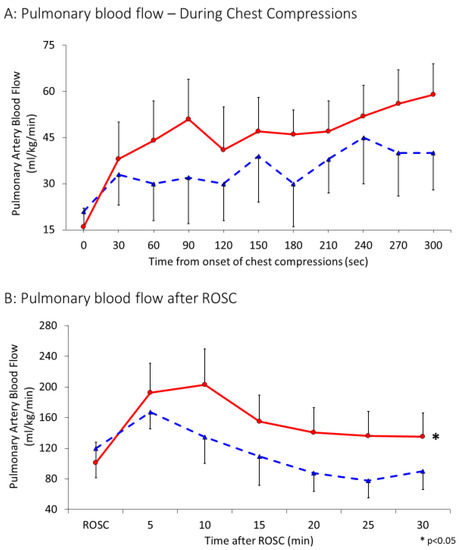 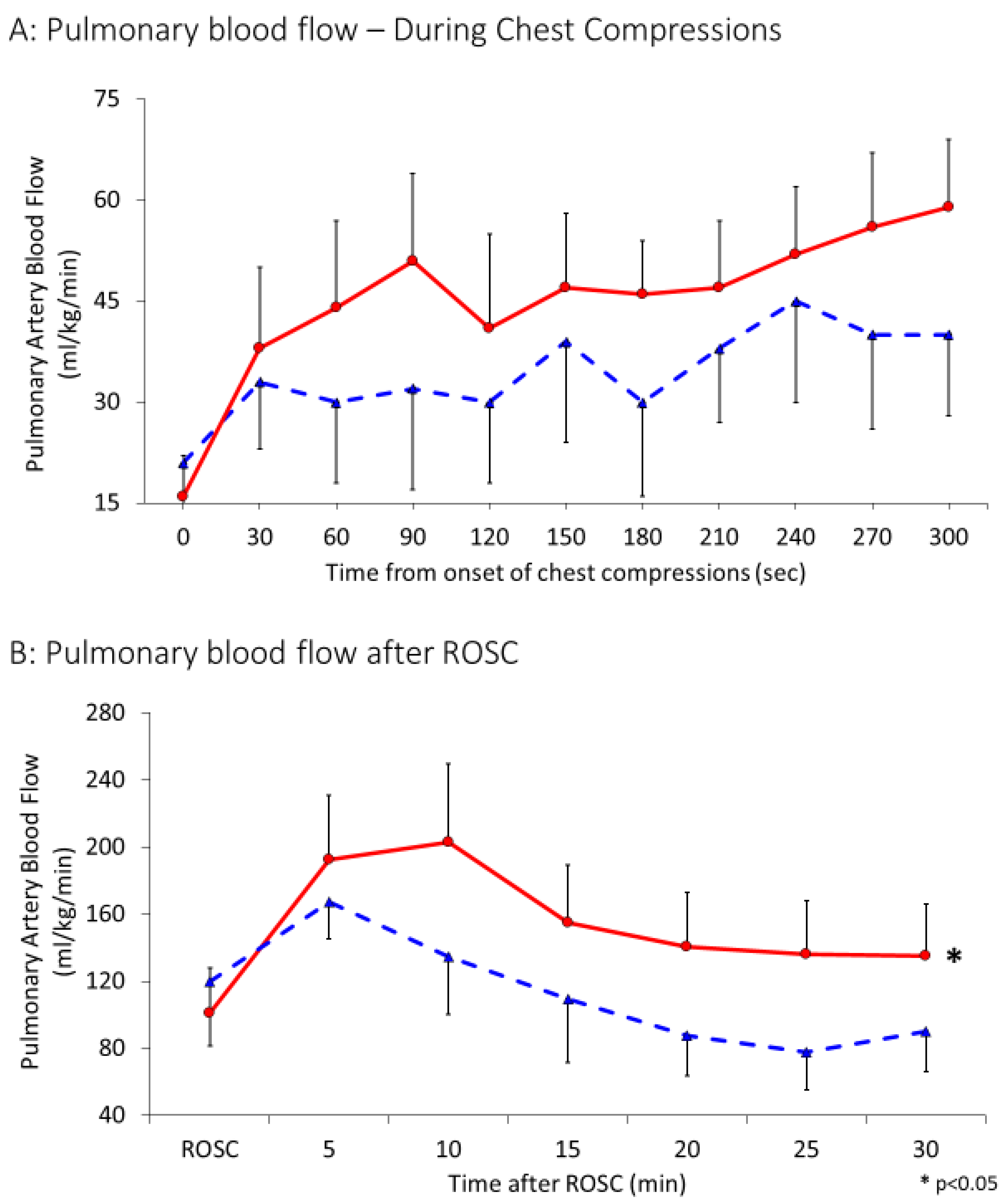 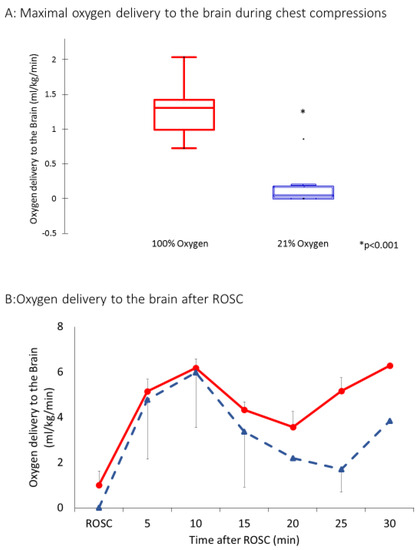 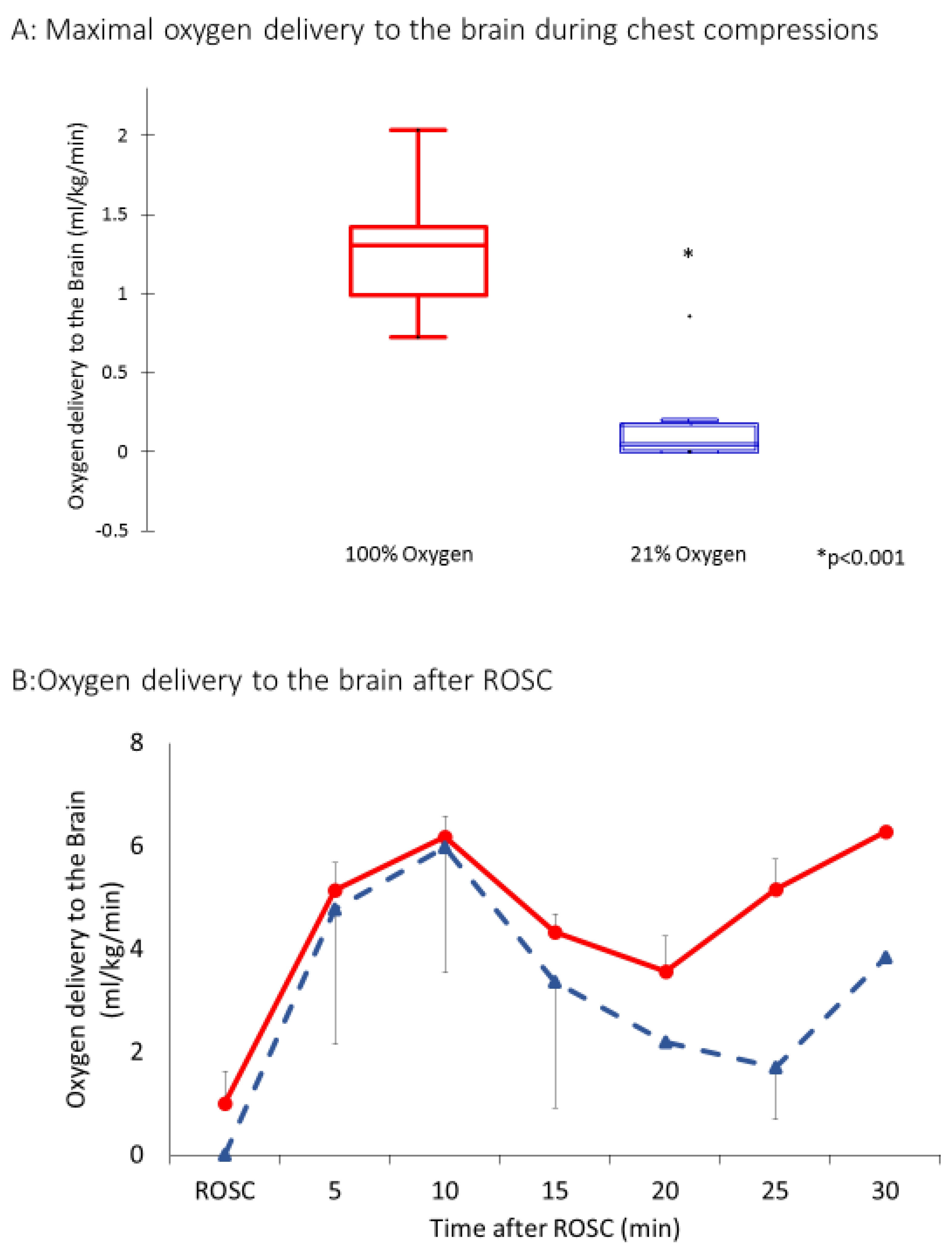