Immigrant families are known to be at higher risk of food insecurity compared to non-immigrant families. Documented immigrants in the U.S. <5 years are ineligible for the Supplemental Nutrition Assistance Program (SNAP). Immigration enforcement, anti-immigrant rhetoric, and policies negatively targeting immigrants have increased in recent years. Anecdotal reports suggest immigrant families forgo assistance, even if eligible, related to fear of deportation or future ineligibility for citizenship. In the period of January 2007–June 2018, 37,570 caregivers of young children (ages 0–4) were interviewed in emergency rooms and primary care clinics in Boston, Baltimore, Philadelphia, Minneapolis, and Little Rock. Food insecurity was measured using the U.S. Department of Agriculture’s Food Security Survey Module. Overall, 21.4% of mothers were immigrants, including 3.8% in the U.S. <5 years (“<5 years”) and 17.64% ≥ 5 years (“5+ years”). SNAP participation among <5 years families increased in the period of 2007–2017 to 43% and declined in the first half of 2018 to 34.8%. For 5+ years families, SNAP participation increased to 44.7% in 2017 and decreased to 42.7% in 2018. SNAP decreases occurred concurrently with rising child food insecurity. Employment increased 2016–2018 among U.S.-born families and was stable among immigrant families. After steady increases in the prior 10 years, SNAP participation decreased in all immigrant families in 2018, but most markedly in more recent immigrants, while employment rates were unchanged. View Full-Text
Keywords: immigrant families; food insecurity; supplemental nutrition assistance program immigrant families; food insecurity; supplemental nutrition assistance program
►▼ Show Figures 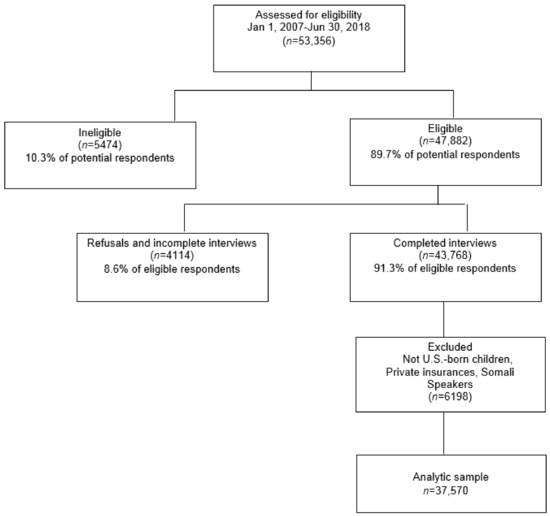