Background: Recently, the number of refugees in Germany has skyrocketed, leading to a marked increase in refugee children admitted to hospitals. This study describes the special characteristics encountered in pediatric surgical inpatient refugees compared to locally residing patients. Methods: Hospital records of minor refugees admitted to our department from 2005 up to and including 2015 were retrospectively reviewed. Demographic data, diagnoses, comorbidities, body mass indexes, hemoglobin values, and lengths of stay were extracted and statistically compared to local patients. Results: A total of 63 refugee children were analyzed and compared to 24,983 locally residing children. There was no difference in median body mass index (16.2 vs. 16.3, respectively, p = 0.26). However, refugee children had significantly lower hemoglobin values (11.95 vs. 12.79 g/dL, p < 0.0001) and were more likely to be colonized with methicillin-resistant Staphylococcus. aureus (8% vs. 0.04%, p < 0.01). Refugees were much more likely to present with burn injuries (16% versus 3% of admissions, p < 0.001), esophageal foreign bodies (4% vs. 0.5%, p < 0.001), as well as trauma, except for closed head injury. Conclusion: The cohort of refugee children in this study was found to be at a particular risk for suffering from burn injuries, trauma, foreign body aspirations, and anemia. Appropriate preventive measures and screening programs should be implemented accordingly.
Keywords: refugee; children; anemia; burns; trauma; foreign bodies; Methicillin-resistant Staphylococcus aureus; Multidrugresistant gram negative bacteria refugee; children; anemia; burns; trauma; foreign bodies; Methicillin-resistant Staphylococcus aureus; Multidrugresistant gram negative bacteria

In the years 2014 and 2015, the number of incoming refugees in Germany skyrocketed. Approximately one-third of the arrivals were estimated to be minors [1,2], leading to a marked increase in refugee children admitted to pediatric and pediatric surgical departments. This wave has posed a variety of challenges to the healthcare system, ranging from language barriers and cultural issues to special resource allocation and funding of care [3].
We noticed that refugee children presented to our department with diagnoses and comorbidities that were markedly different than those of the native population. In particular, we were faced with a wave of burn and scald injuries at an intensity and scale not seen since the 1990s, before widespread anticipatory guidance and awareness campaigns were implemented in German society [4].
In this study, we investigated the special characteristics of refugee children admitted to a large academic pediatric surgical department in the southwest of Germany, focusing on diagnoses, colonization with resistant organisms, laboratory values, and growth parameters.

The study was submitted to the ethics board of the state of Rhineland-Palatinate and deemed exempt from formal review due to the retrospective analysis of anonymous, routine medical data according to §36 and §37 of state hospital law.

All patients admitted to our department from January 2005 until December 2015 were included. None were excluded. In order to discriminate between newly arrived refugee children and the local population, we stratified patient datasets by insurance status. While all children in Germany are generally insured either through private or publicly regulated companies, medical care of newly arrived refugees is funded by the municipality where the patient is registered. Once the asylum request is granted, which generally takes more than 6 months, the payer switches to one of the insurance companies. This difference is clearly marked in the electronic medical records, allowing us to discern between the newly arrived refugee children and those with permanent resident status.
Electronic medical records were then searched for demographic data, diagnostic and procedural codes, laboratory data, and findings of microbiological screening tests. These were statistically compared for differences between the cohorts.

The statistical analysis was performed with SPSS for Windows 8, Version 22.0 (IBM Deutschland GmbH, Ehningen, Germany), using a t-test, Mann–-Whitney test, and chi-squared analysis where appropriate. A level of p < 0.05 was defined as significant. Values are given as means with the standard deviation after the ± symbol, except when noted otherwise.

The annual numbers of refugee children admitted to our department increased at least 10-fold in the years 2014 and 2015 compared to the previous years from 2005 up to and including 2013 (Figure 1). A total of 63 admitted inpatient refugee children were analyzed and compared to 24,983 locally residing children. Many patients (69%) had no information on country of origin registered in the electronic medical records. The remainder came from Syria (11%), Albania (11%), Eritrea (8%), and Afghanistan (6%).
Refugee children were significantly younger (mean age 5.6 ± 4.7 years, median four years) than local residents (mean 7.5 ± 0.4 years, median 7 years, p = 0.03). Males were more prevalent in both groups (refugees 55%, locals 58%), without any statistical difference. There was also no difference in length of stay (median 4 days for both) between the cohorts.

There were no differences between age-adjusted weight, height, or body mass index (BMI), except that the range and standard deviation of BMI was greater in refugees (Figure 2).

As demonstrated in Figure 3, hemoglobin levels were significantly lower in the refugee cohort compared to the local population (mean 11.95 ± 0.9 g/dL versus mean 12.79 ± 0.8 g/dL, respectively, p < 0.001). Anemia, according to age-adjusted nomograms [4,5] was present in 16% of refugee children versus 3% of the locally resident inpatient population. No other differences in laboratory parameters were found.

There were clear differences in the rates of certain admission diagnoses recorded in the two cohorts (Figure 4). While locally residing patients were about 3 times more likely to be admitted with a closed head injury, refugee children were 5.5 times more likely to suffer burns, and 8 times more likely to have a retained esophageal foreign body or wrist injury. In addition, other trauma, such as kidney injury, ankle injury, and elbow fracture, was documented more often than compared the local population.
Concerning the burns, the most common mechanisms of injury were scald injuries. In about half of the cases, the child pulled down a pot, water boiler, or other form of container from a table or kitchen counter. The burn victims in the refugee cohort were 6 girls and 2 boys, with a combined median age of 3 years.

Minor refugees in Germany have a higher risk of being anemic and being colonized by drug-resistant organisms than their peers in the local resident population. They also are more likely to suffer burn injuries and other types of significant trauma, other than minor closed head trauma. Care of these patients should focus on adequate iron intake, personal hygiene, antibiotic stewardship in the treatment of minor or viral infection to limit the emergence of drug-resistant nosocomial microbial flora, and safety measures to prevent trauma and burns. Furthermore, widespread MRSA eradication should be offered to families whose children screened positive for this. Education on how to prevent scalds and burns is particularly important in this context. We would strongly suggest implementing regular burn injury prevention and safety programs for all pediatric refugees and their families. 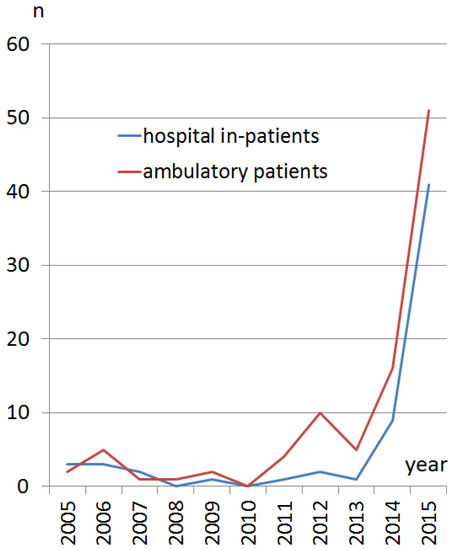 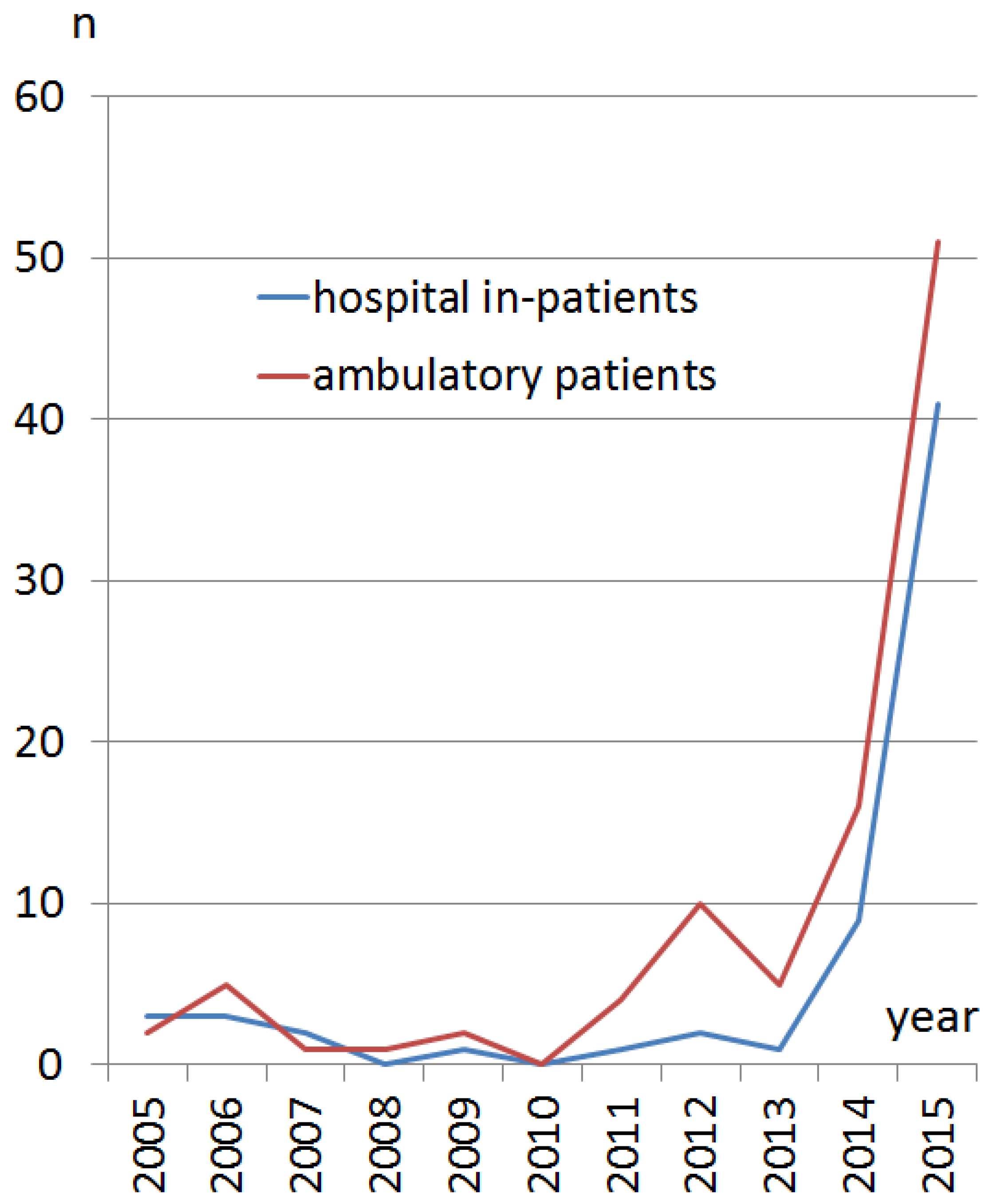 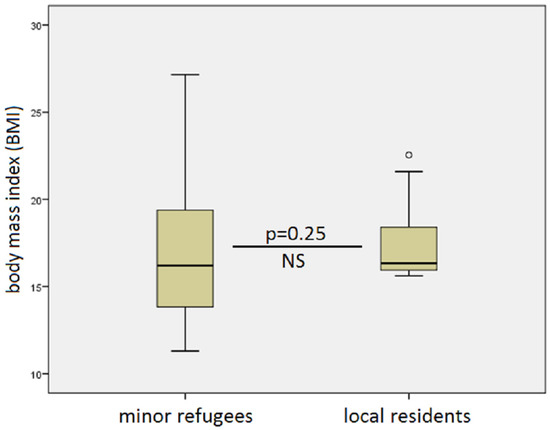 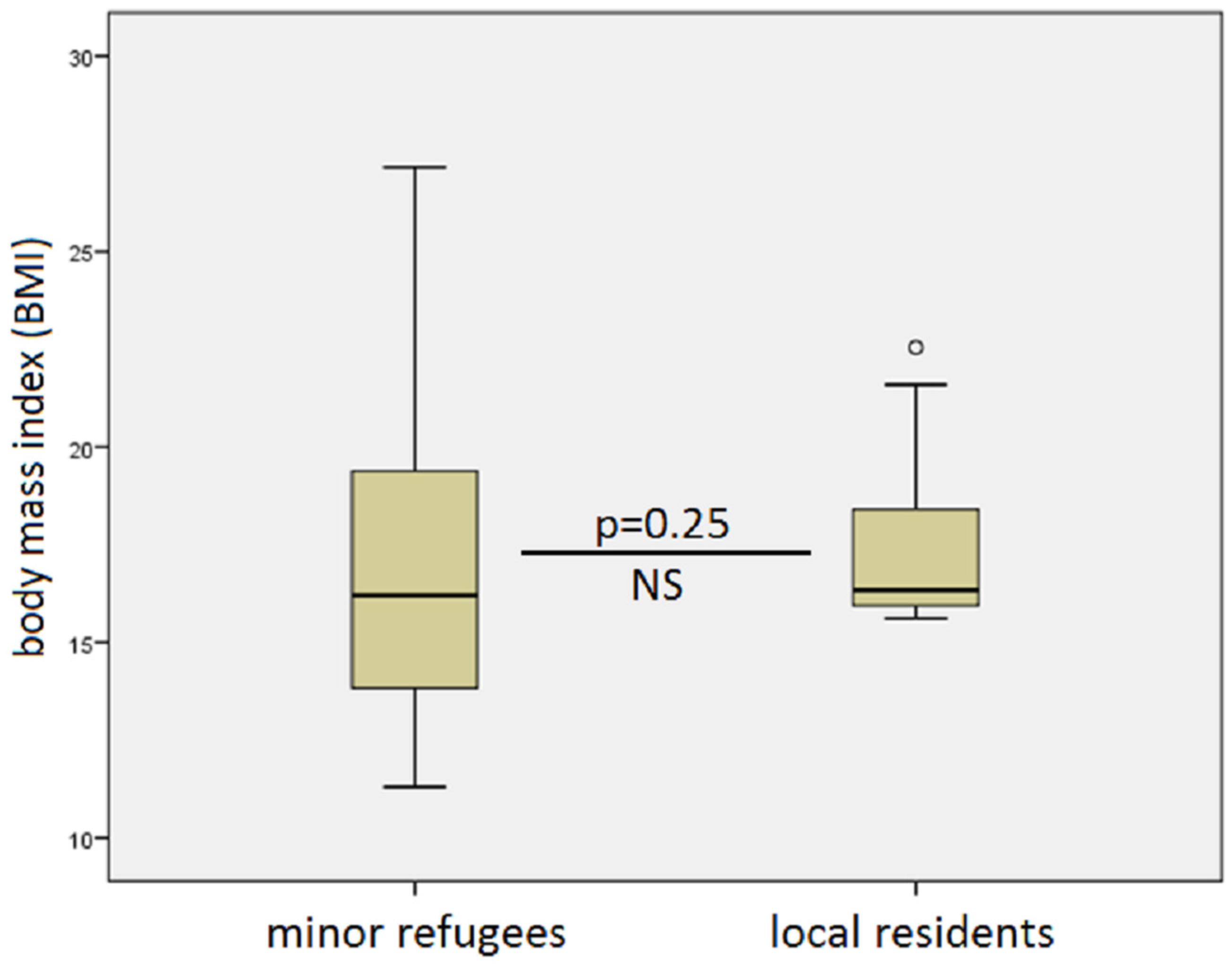 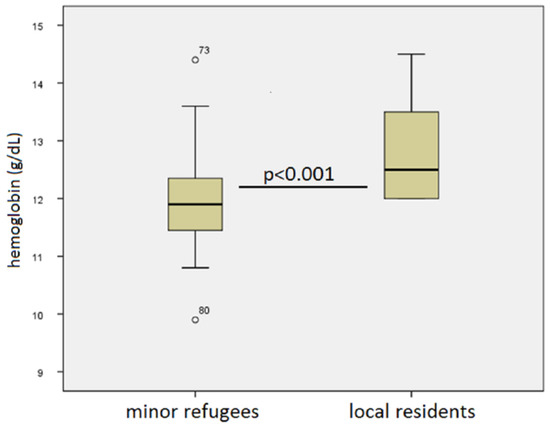 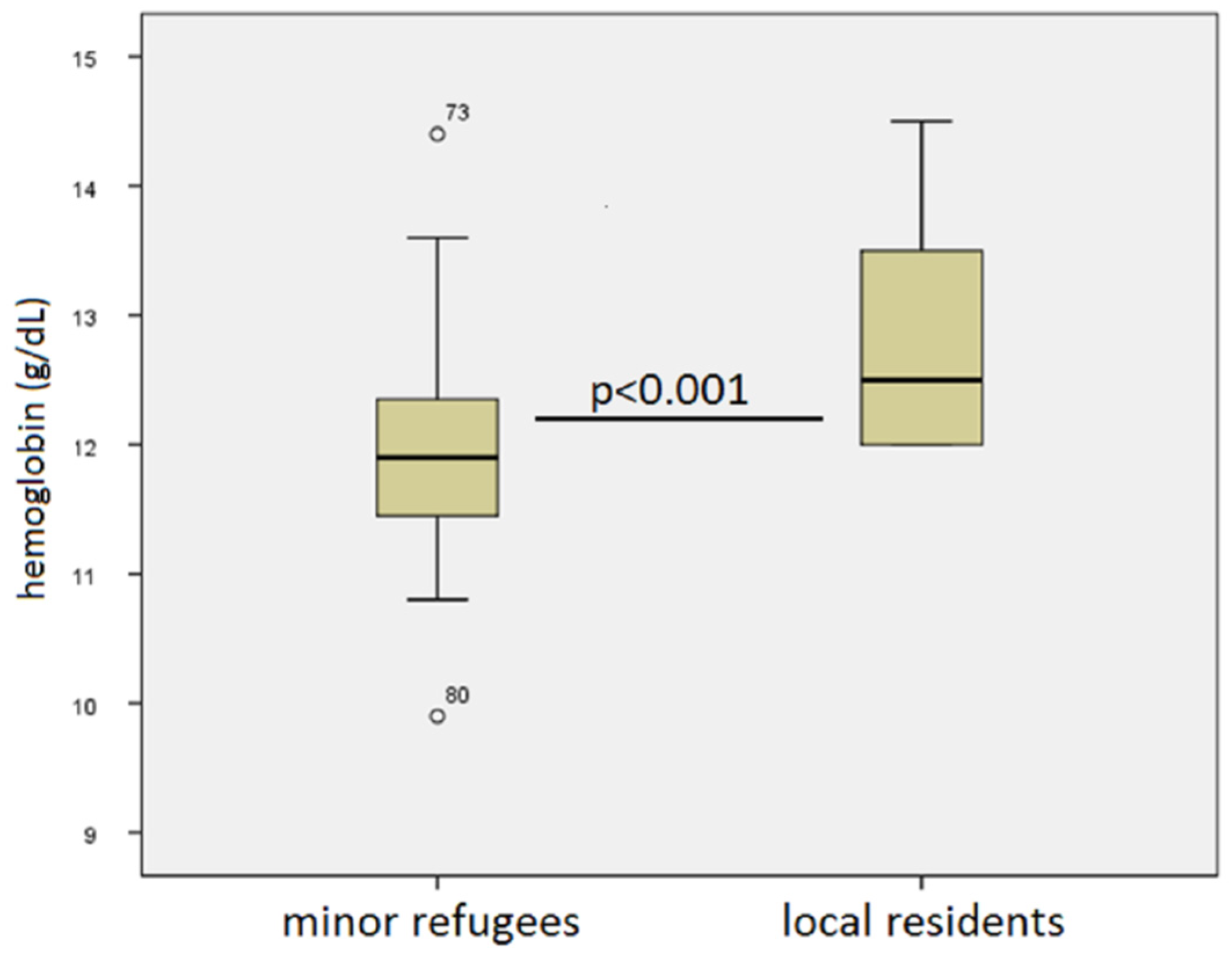 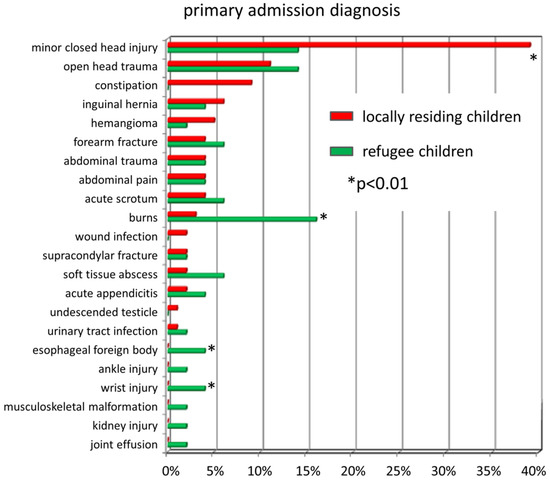 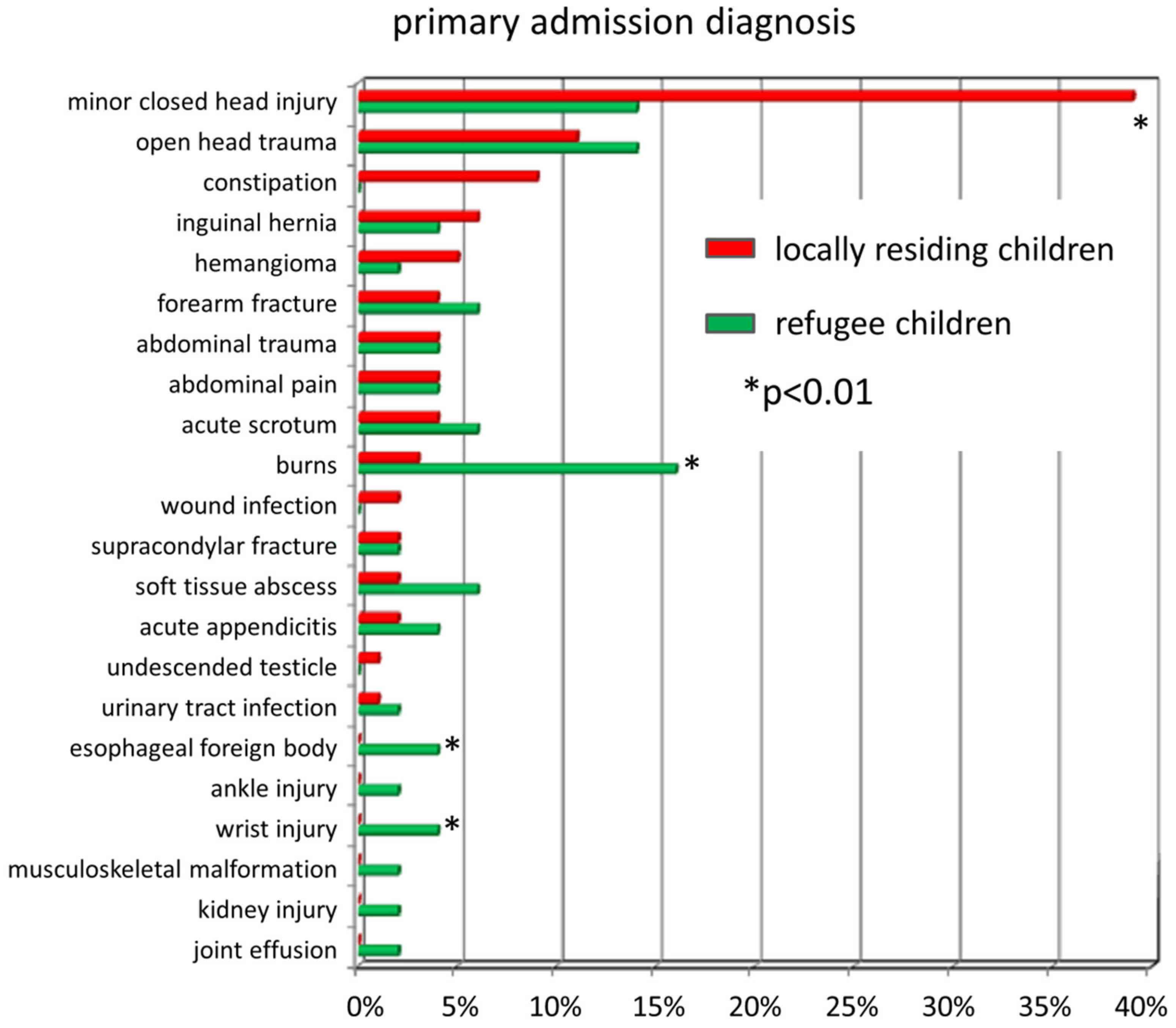