Feasibility Study on the Role of Personality, Emotion, and Engagement in Socially Assistive Robotics: A Cognitive Assessment Scenario
Previous Article in Journal

Rational models of human behavior aim to predict, possibly control, humans. There are two primary models, the cognitive model that treats behavior as implicit, and the behavioral model that treats beliefs as implicit. The cognitive model reigned supreme until reproducibility issues arose, including Axelrod’s prediction that cooperation produces the best outcomes for societies. In contrast, by dismissing the value of beliefs, predictions of behavior improved dramatically, but only in situations where beliefs were suppressed, unimportant, or in low risk, highly certain environments, e.g., enforced cooperation. Moreover, rational models lack supporting evidence for their mathematical predictions, impeding generalizations to artificial intelligence (AI). Moreover, rational models cannot scale to teams or systems, which is another flaw. However, the rational models fail in the presence of uncertainty or conflict, their fatal flaw. These shortcomings leave rational models ill-prepared to assist the technical revolution posed by autonomous human–machine teams (A-HMTs) or autonomous systems. For A-HMT teams, we have developed the interdependence theory of complementarity, largely overlooked because of the bewilderment interdependence causes in the laboratory. Where the rational model fails in the face of uncertainty or conflict, interdependence theory thrives. The best human science teams are fully interdependent; intelligence has been located in the interdependent interactions of teammates, and interdependence is quantum-like. We have reported in the past that, facing uncertainty, human debate exploits the interdependent bistable views of reality in tradeoffs seeking the best path forward. Explaining uncertain contexts, which no single agent can determine alone, necessitates that members of A-HMTs express their actions in causal terms, however imperfectly. Our purpose in this paper is to review our two newest discoveries here, both of which generalize and scale, first, following new theory to separate entropy production from structure and performance, and second, discovering that the informatics of vulnerability generated during competition propels evolution, invisible to the theories and practices of cooperation. View Full-Text
Keywords: interdependence; complementarity; bistability; uncertainty and incompleteness; non-factorable information and tradeoffs; autonomous teams (Level 5 vehicles) interdependence; complementarity; bistability; uncertainty and incompleteness; non-factorable information and tradeoffs; autonomous teams (Level 5 vehicles)
►▼ Show Figures 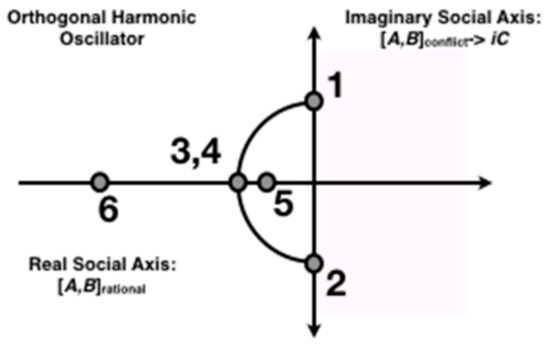