Histologic Patterns and Clues to Autoinflammatory Diseases in Children: What a Cutaneous Biopsy Can Tell Us
Previous Article in Journal

Insidious-Onset Indurated Plaques on the Shins

Background: The association between Merkel cell carcinoma (MCC) and chronic lymphocytic leukemia/small lymphocytic leukemia (CLL/SLL) is well established in the literature. A majority of MCCs are known to be associated with Merkel cell carcinoma polyomavirus (MCPyV), which is postulated to be a possible causative agent linking these two entities. We aim to identify the presence of MCPyV in patients with concurrent adjacent MCC and CLL/SLL. Methods: Archived pathology materials of three cutaneous or surgical excisions with concurrent MCC and CLL/SLL were reviewed. Additional 12-µm sections from paraffin-embedded tissue of these resections were matched with original hematoxylin and eosin-stained slides and used to extract foci from each tumor separately. DNA was extracted from these tissues, and polymerase chain reaction (PCR), utilizing a primer set within a highly conserved “small T” viral DNA region, was done to detect MCPyV. Results: Out of 140 cases of cutaneous or surgical excisions with MCC identified in our electronic medical records (EMR), three had coexisting neighboring CLL/SLL in the same resection specimen. In one case out of three, MCPyV was detected in MCC but not in CLL/SLL. The remaining two cases showed no detection of MCPyV in either MCC or CLL/SLL. Conclusion: MCPyV was not concurrently associated with adjacent MCC and CLL/SLL, indicating that it is not driving simultaneous tumorigenesis, at least in a subset of these cases.
Keywords: Merkel cell carcinoma; CLL/SLL; Merkel cell polyomavirus; concurrent tumorigenesis Merkel cell carcinoma; CLL/SLL; Merkel cell polyomavirus; concurrent tumorigenesis

Merkel cell carcinoma (MCC) is a relatively rare primary cutaneous neuroendocrine carcinoma with aggressive clinical behavior. The incidence of MCC has tripled in the last 15 years, making the second most common cause of skin cancer death after melanoma [1,2]. Ultraviolet (UV) light exposure is a well-established risk factor for the development of MCC. More recently, a viral oncogenic pathway involving Merkel cell polyomavirus (MCPyV), a non-enveloped double-stranded DNA polyomavirus, has been described as an alternate mechanism driving malignant transformation [3]. MCPyV DNA was found in up to 80% of MCC cases in several studies [3,4,5]. As such, MCC can either be associated with MCPyV or not, with preliminary studies showing some contradicting results of the significance of this distinction [6,7,8,9].
MCPyV encodes several polyomavirus genes that are responsible for viral genome replication in the host cell, including large T antigen (LTag) and small T antigen (STag) [3]. Integration of the virus and truncating mutation of LTag are the principal genetic events. LTag and Stag drive the cellular proliferation and survival in MCPyV-positive MCC [4,10,11].
The association between MCC and chronic lymphocytic leukemia/small lymphocytic lymphoma (CLL/SLL) is well-documented and might indicate a possible common etiology [12,13]. While a number of factors have been proposed to explain this observation, MCPyV has also emerged as a plausible link between these two entities. Interestingly, MCPyV was also detected in up to 33% of CLL/SLL cases [14,15]. In addition, patients with CLL/SLL have an increased risk of developing MCPyV-positive MCC [16].
To further investigate this association, we aimed to identify the presence of MCPyV in three rare cases of concurrent adjacent MCC and CLL/SLL.

The study was approved by the Institutional Review Board with a waiver of consent. Archived pathology materials from three surgical resections of MCC with concurrent adjacent CLL/SLL, out of 140 cases of MCC excisions identified in our electronic medical records (EMR), were retrieved and reviewed. Hematoxylin and eosin (H&E) and immunohistochemically stained slides from these resections were reviewed by one hematopathologist and two pathology residents for confirmation of diagnosis. Additional 12-µm unstained sections were taken from paraffin-embedded tissue blocks of these resections. Unstained slides were matched with original hematoxylin and eosin (H&E) slides and areas from each tumor were extracted separately using microdissection technique. DNA was extracted from these tissues and polymerase chain reaction (PCR), utilizing a primer set within a highly conserved “small T antigen” viral DNA region, was done to detect MCPyV [17].

A 78-year-old male with a history of CLL/SLL presented with left parotid mass and left-sided cervical lymphadenopathy, underwent left parotidectomy and modified radical neck dissection. A microscopic examination of the parotid gland, para-parotid and cervical lymph nodes showed foci of metastatic undifferentiated carcinoma with neuroendocrine features strongly suggestive of Merkel cell carcinoma on immunohistochemistry (Tumor cells positive for neuron-specific enolase [NSE], synaptophysin [focal], CD56 [focal], MNF-116, AE1/AE3 [focal] and CK20 [dot-like pattern]). Interestingly, the patient had no previous documented history of primary cutaneous MCC or prior surgical resections of skin lesions. More than 90% of the lymph nodes also showed diffuse effacement of architecture and extensive replacement by CLL as demonstrated by immunohistochemistry (atypical lymphocytes positive for CD20, CD5, CD23 and negative for CD3 and cyclin-D1). Detailed clinical history, including lymphoma stage and prior treatment modalities could not be obtained from the available medical records. Tissues used for PCR analysis are shown (Figure 1).

This case involves an 85-year-old male with a history of multiple recurrent squamous cell carcinomas (SCC) of the face and scalp, who had previously undergone resection of a large Merkel cell carcinoma involving the left side of his face and the parotid gland 11 months prior to his current presentation followed by re-excision of recurrent disease in the same location five months later. The patient also received adjuvant chemotherapy. He presented with a (3.3 cm) left cheek and neck mass and left posterior triangle lymphadenopathy highly suspicious for recurrent MCC. He underwent radical resection of the mass with left neck node dissection. The final pathology from the cheek/neck resection revealed recurrent MCC and dense monomorphic small lymphocytic infiltrate in the surrounding stroma. Three left posterior triangle lymph nodes also showed replacement by CLL (Stage 1 by modified Rai criteria), the largest of which was also involved by MCC. The diagnosis was confirmed by immunohistochemical testing; Tumor cells from the cheek/neck mass showed positivity for synaptophysin, low molecular weight keratin, CK20 and Ber-EP4 and were negative for TTF-1, chromogranin and high molecular weight keratin. The atypical lymphocytes were positive for CD20, CD5 and CD43 and negative for CD3, cyclin-D1, SOX-11 and CD23. Tissues used for PCR analysis are shown (Figure 2).

An 86-year-old male with a history of multiple skin cancers, including basal cell carcinoma (BCC) and SCC status post numerous excisions, presents with a large (8.5 cm) exophytic lesion on the right temple. He also had findings of a right parotid mass on physical examination confirmed on subsequent computed tomography (CT) scan. A biopsy from the skin lesion was consistent with BCC. He underwent a wide local excision of his temporal lesion and right superficial parotidectomy. Microscopic examination of the main skin excision specimen and the right parotid gland showed high-grade neuroendocrine carcinoma consistent with MCC adjacent to and focally colliding with an atypical lymphoid proliferation consistent with CLL/SLL (Stage 1 by modified Rai criteria). Sections from a right facial lymph node also showed a low-grade lymphoma consistent with CLL and involvement by metastatic MCC. Immunohistochemical studies and flow cytometry were performed and supported the diagnosis. Tumor cells from the right temple mass were positive for AE1/AE3, MNF-116, CD56, synaptophysin, CK20 (dot-like pattern) and showed a high proliferation index with Ki67 > 90%. The adjacent atypical lymphocytes were positive for CD19, CD20, CD5, CD23 and showed a low proliferation index as assessed by Ki67. Tissues used for PCR analysis are shown (Figure 3).

The overall incidence of CLL/SLL in our cohort of MCC cases is 2.1%. In case 1, MCPyV was detected in MCC but not in CLL/SLL. Cases 2 and 3 showed no detection of MCPyV in either MCC or CLL/SLL (Table 1).

In conclusion, MCPyV is not concurrently associated with adjacent MCC and CLL/SLL, at least in a subset of cases.

The study was conducted according to the guidelines of the Declaration of Helsinki, and approved by the Institutional Review Board of ALBANY MEDICAL CENTER (protocol code 5036 and date of approval; 18 December 2018).

This study was approved by the IRB with a waiver from getting an informed consent given that it was not possible to reach all the patients involved and that our study was a case series rather than a case report. 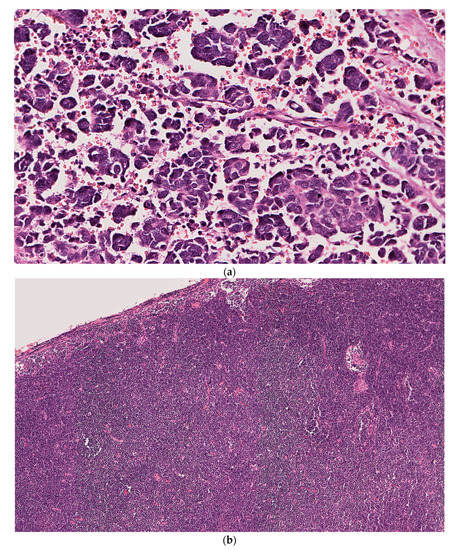 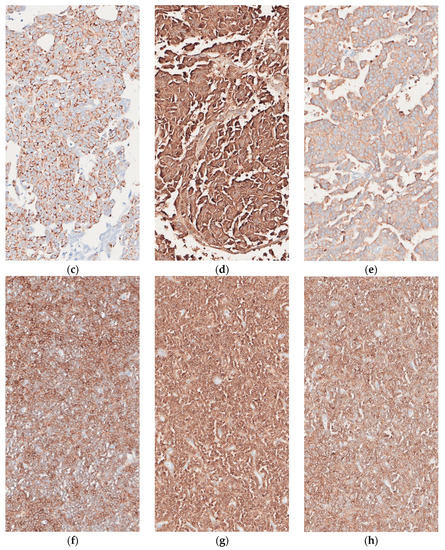 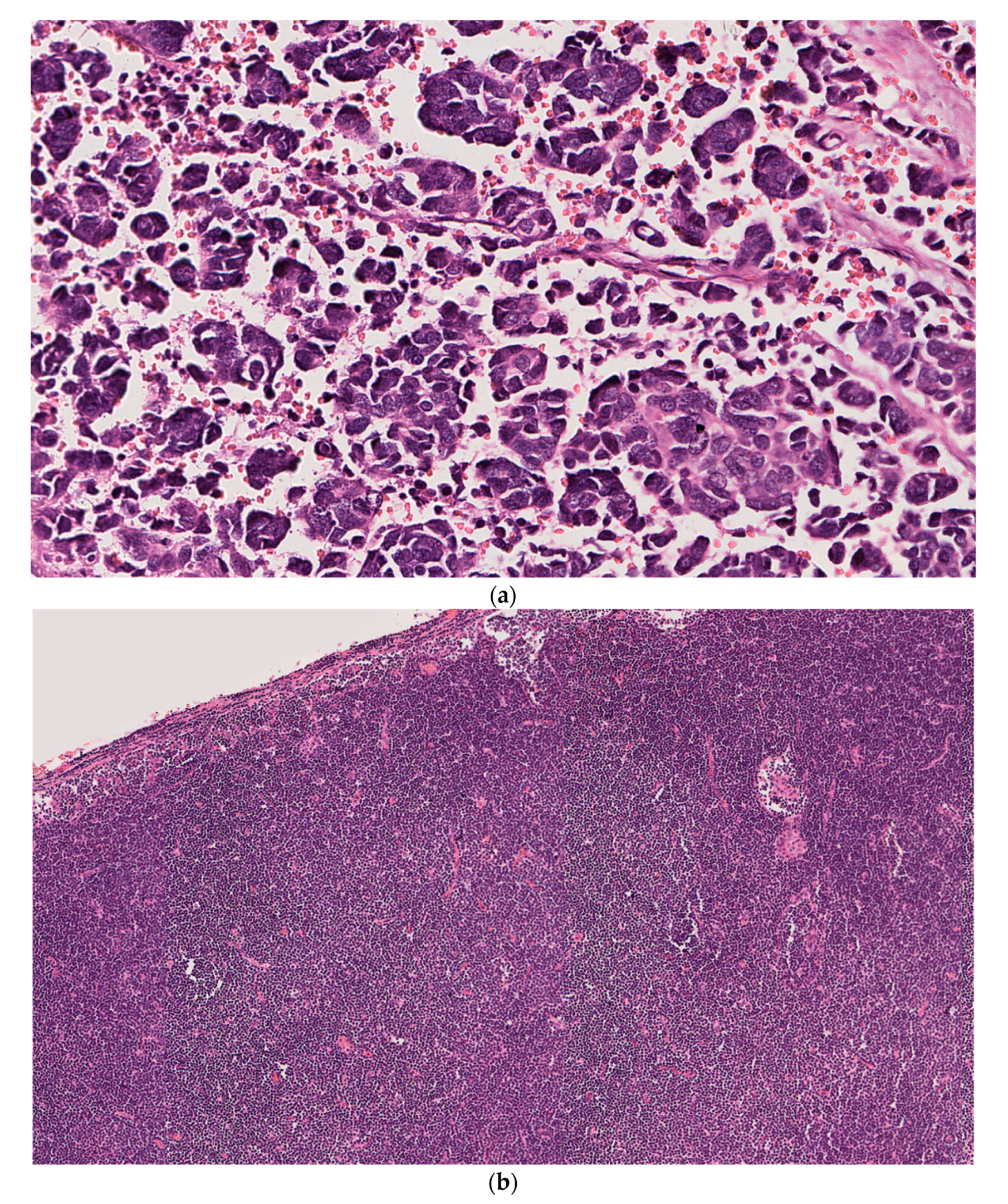 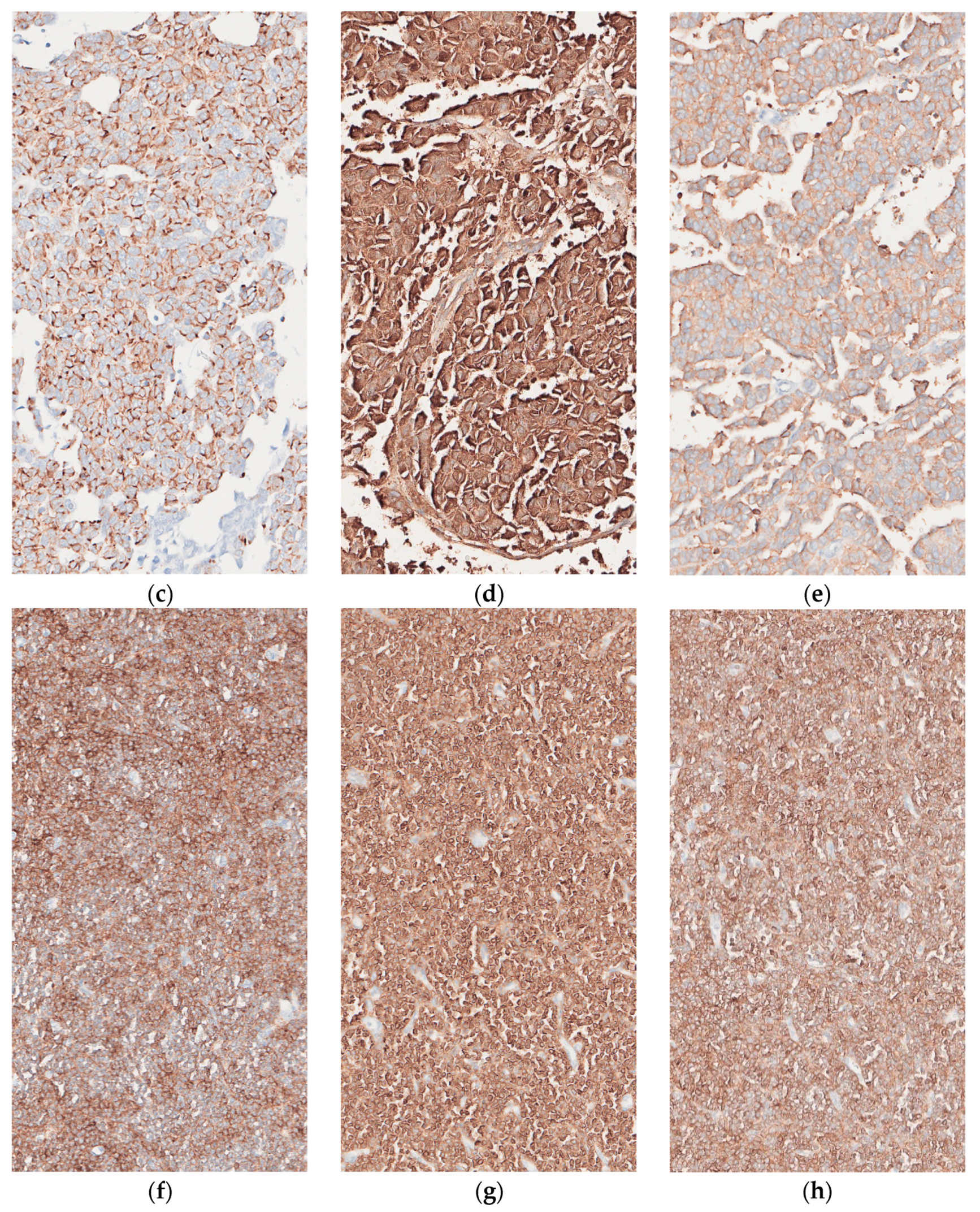 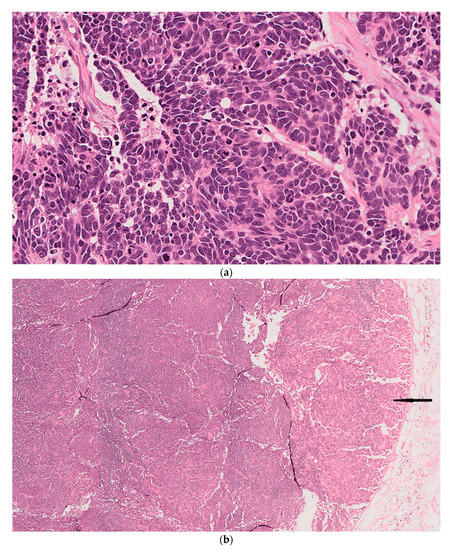 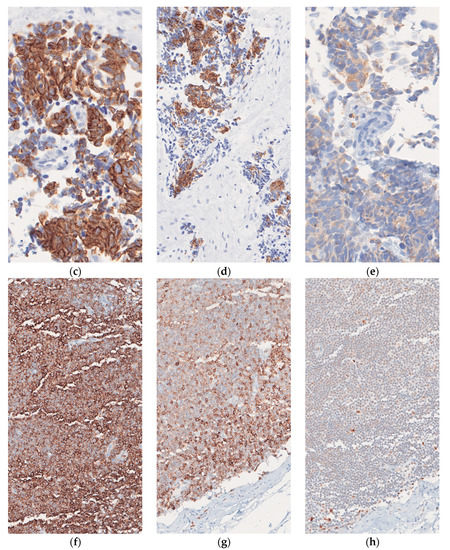 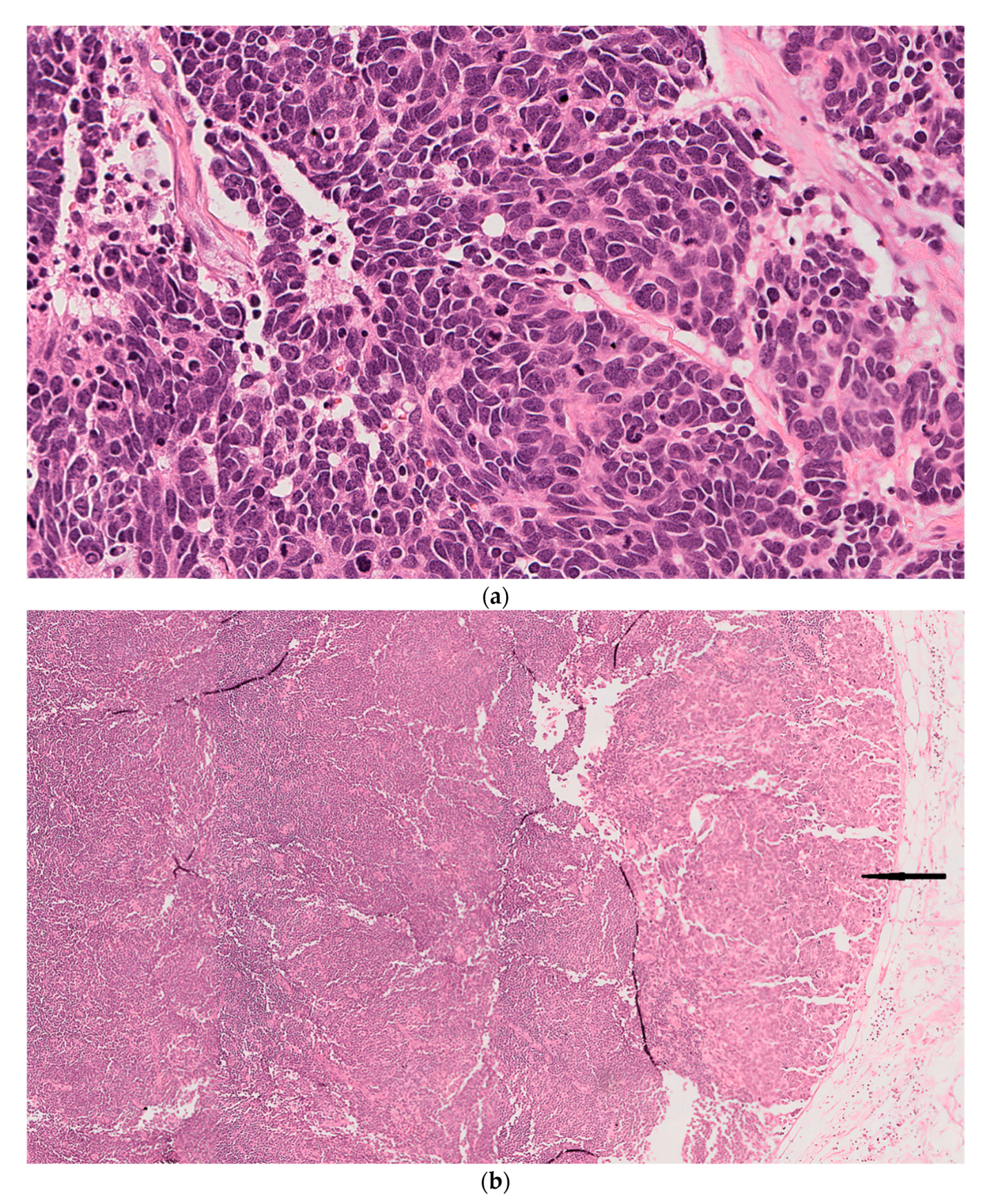 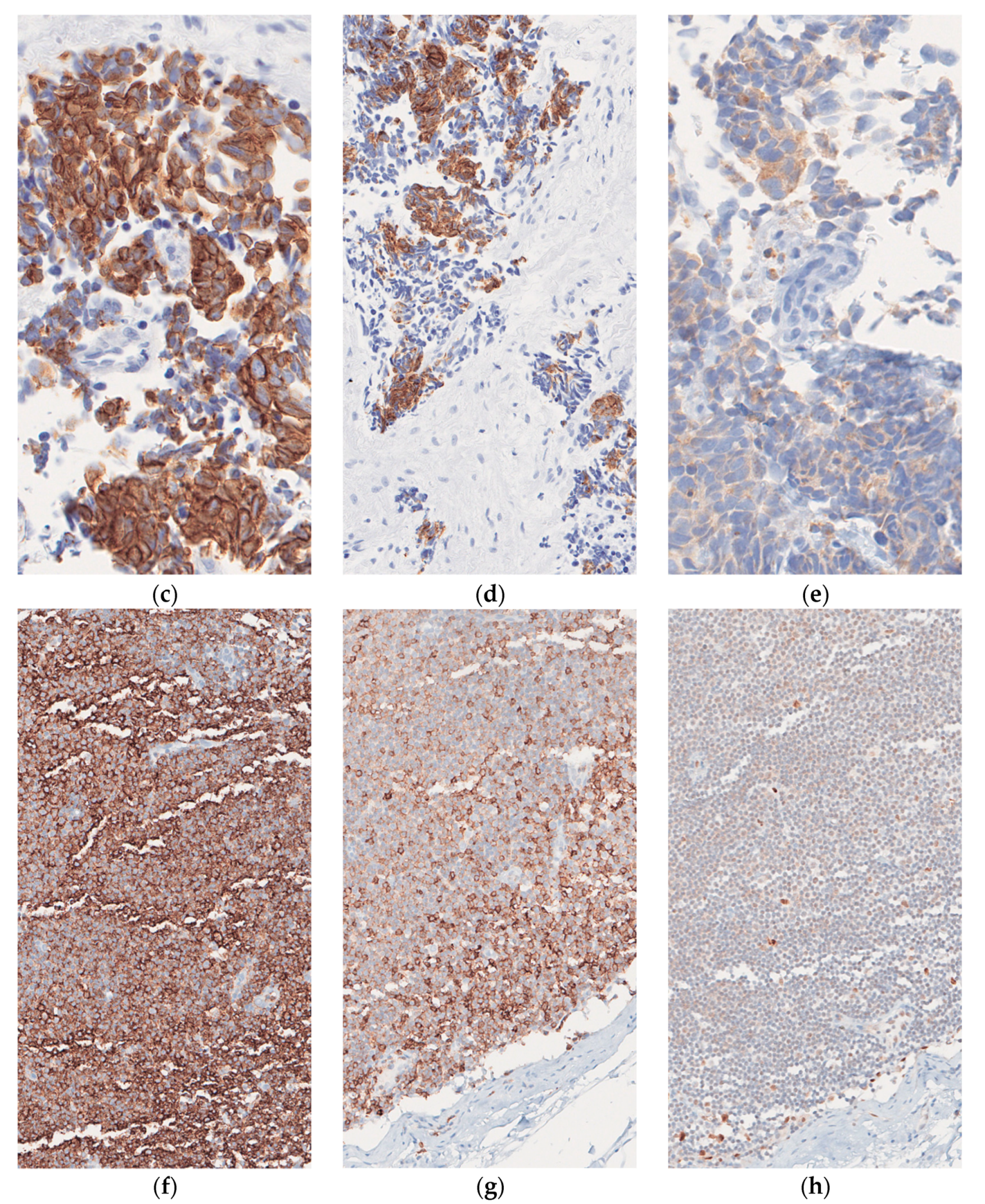 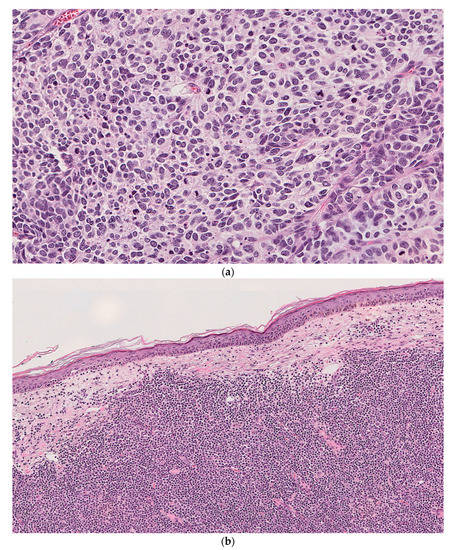 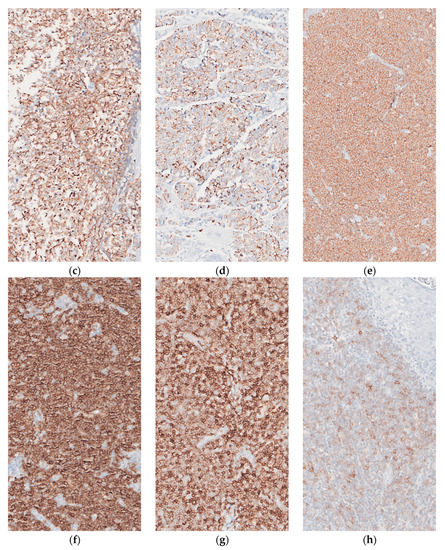 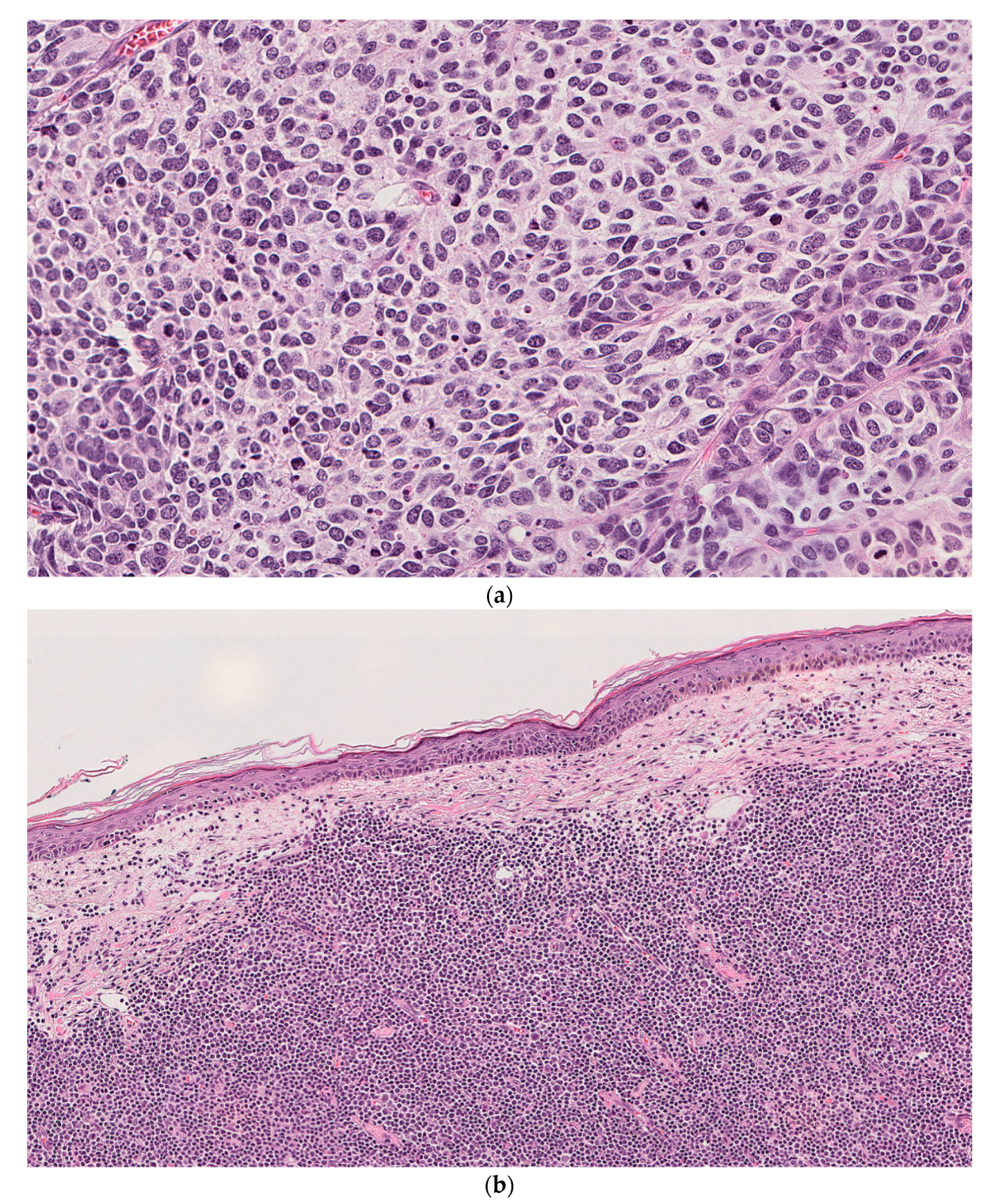 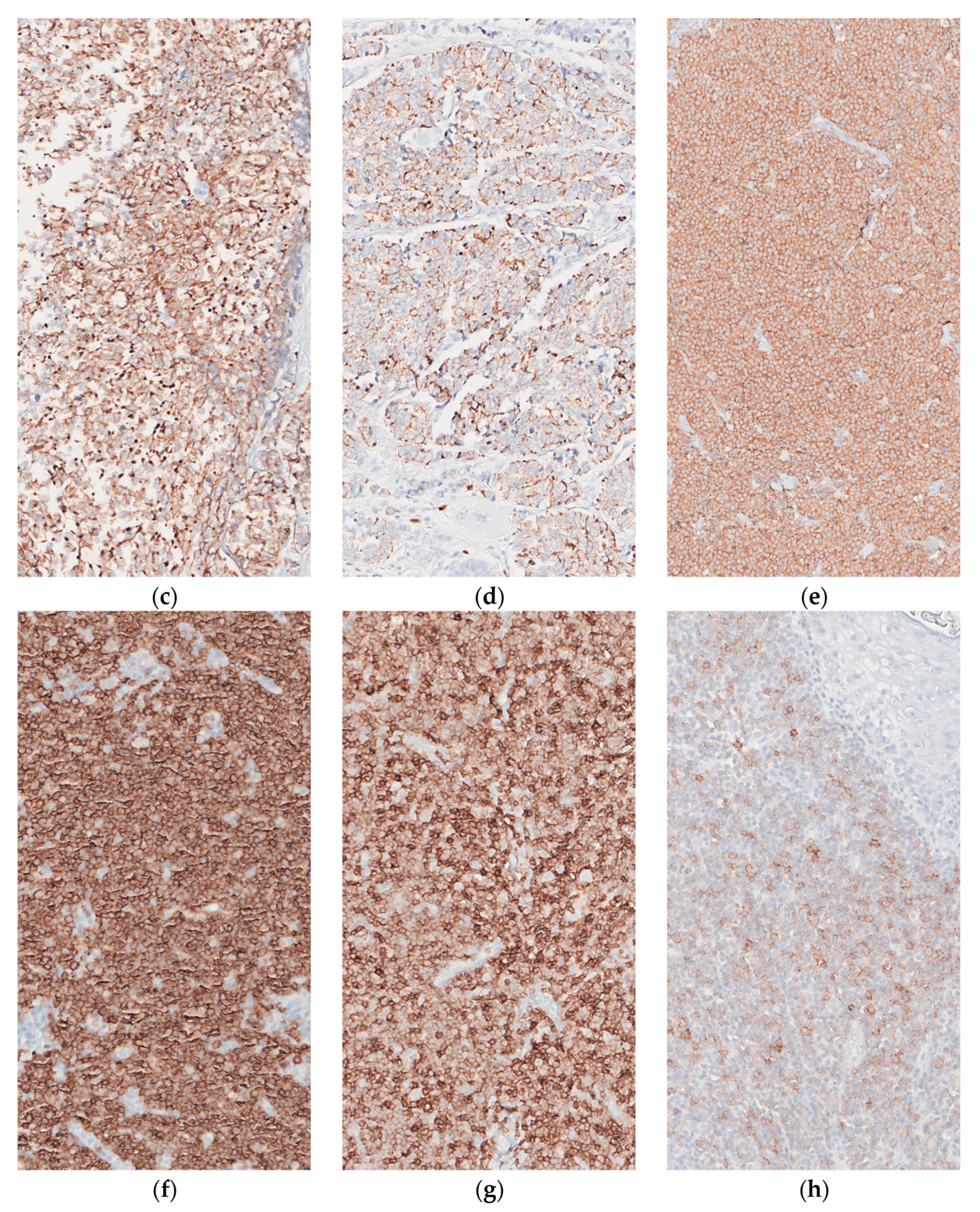